Quick Q&amp;A - Call of the Beastmen!

Yesterday we announced the first big TW:Warhammer DLC that adds a new Race and a new Campaign Map to the game, “Call of the Beastmen”.

Here’s a quick Q&A on some of the questions we’ve been sent or seen cropping up.

The new Campaign Map for the Beastmen story “An Eye for an Eye”, how big is it/who can I play as?
It’s 52 regions and can take between 10-20 hours to complete. We are quite pleased with how it’s turned out, a nicely escalating frenzy of a challenge as you hunt down and confront Todbringer. You’ll play as Khazrak the One Eye, with the NPC factions of Jagged Horn Tribe, Skrinderkin Herd, Shadowgore Herd, Ripper-Horn Tribe, Redhorn Tribe, Middenland, Hochland, Marienburg and the Greenskins will also make an appearance as Gloomywoods and The Black Pit.

Joey will be livestreaming it next Friday if you’d like to see more, in the meantime here’s the map (Khazrak's start position is the large icon on the left, the icons with spiked borders mark horde factions that will start approximately' in those locations): 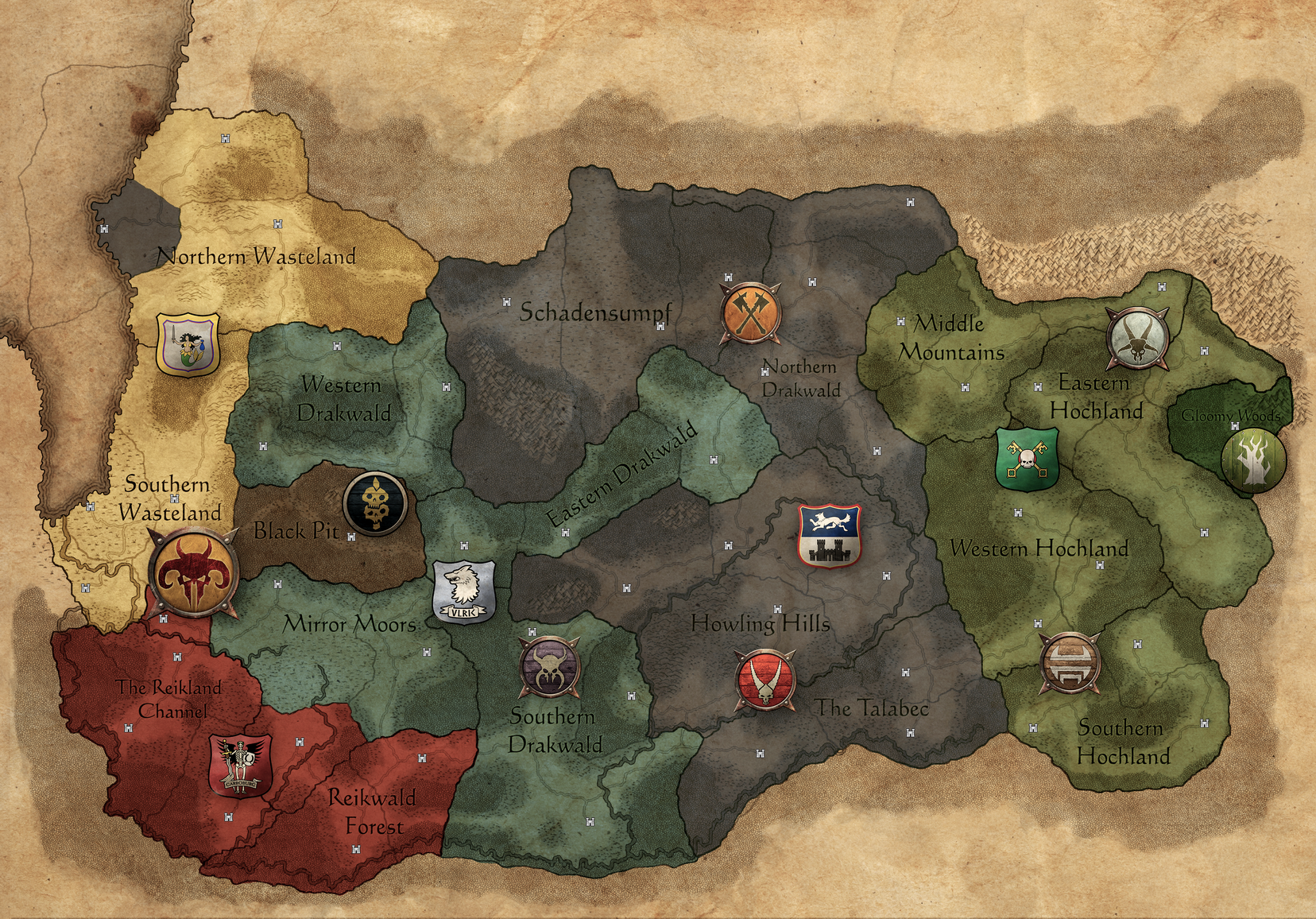 What’s the trigger for a Beastpath battle on the Campaign?
Beastmen are able to move and ambush from a Beastpath Stance, which can trigger a battle in a similar way to how the underway currently works. When they occur, they will take place in a new map environment, example below: 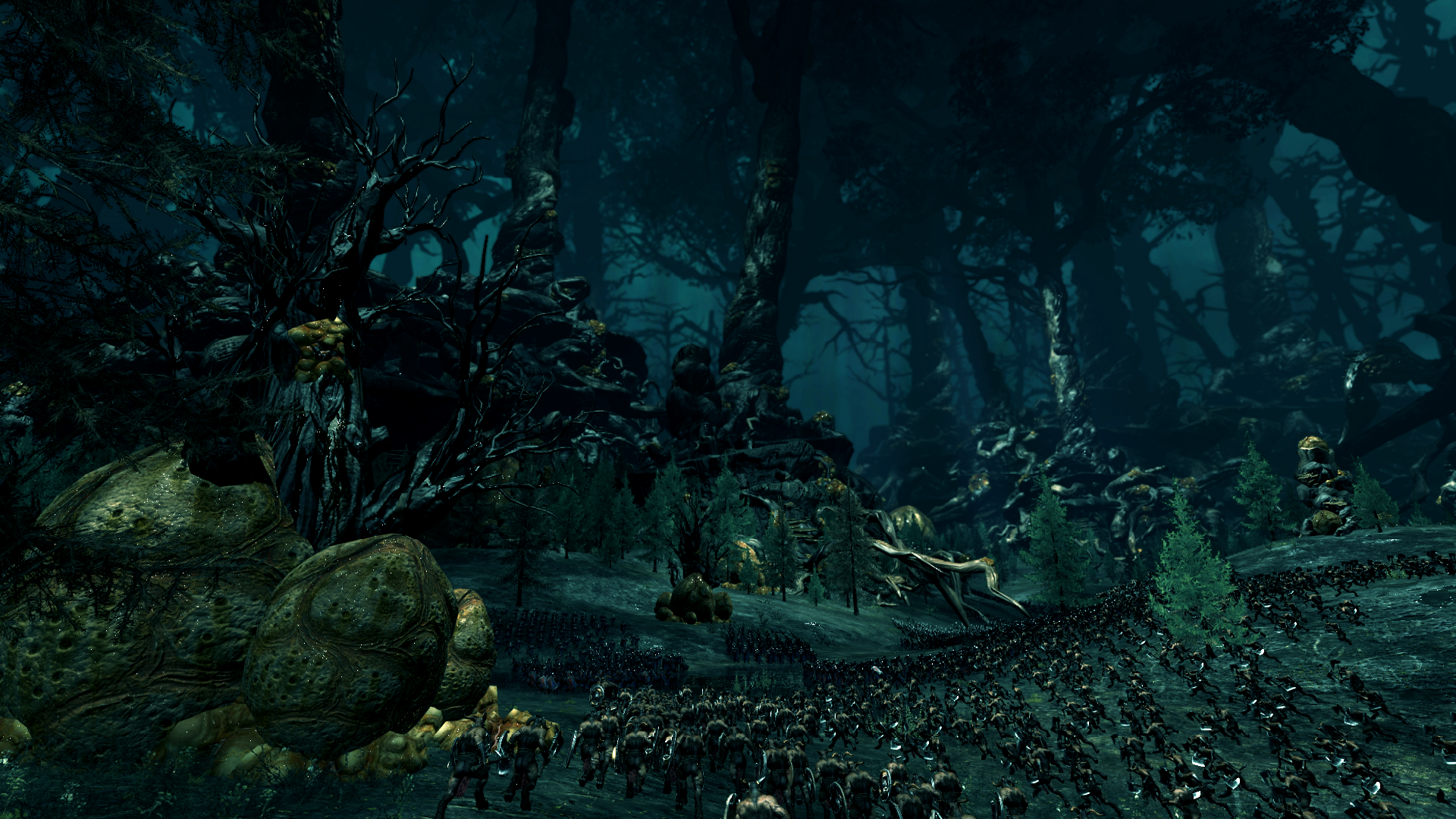 Will there be Free-LC/ a Patch at the same time Beastmen release?
Yes, stay tuned for news on Update 2 (which will include additional features for multi-player), and the free-LC will be the Amber Wizard for the Empire, introducing the Lore of Beasts into the game for the first time. He can also level up to acquire a distinctive variation of the Empire Griffon mount.

What’s their playstyle like?
Your best bet is to tune in for the gameplay videos from next week, but in a phrase, fast and furious. Having lots of units with Vanguard and nearly all with high movement speeds means that you can fall on your enemy almost instantly in many situations. Coupled with the ability to initiate ambushes while on the move, and Lightning Strike battles being unlockable in the Beastlord campaign-skill tree, they offer a real guerrilla-style experience. (lightning Strike battles enable you to face only the army you’re attacking, and deny the enemy the use of any nearby reinforcing armies).

The price is higher than previous large DLCs, what gives?
Essentially, Call of the Beastmen required around three times more content and effort than previous large DLCs we’ve done, mainly due to the array of new creature models, animations, art, environments etc. Not only does it add a new playable race with a bunch of new mechanics to the game, but also adds a Beastman story campaign on a new map – “An eye for an eye”. We wanted to do them justice and make them as distinct as the races in the main game, which meant getting a certain amount of content in to hit that quality bar.

We’ve got loads of gameplay coming up next week so you’ll be able to see everything in action and we will make sure Youtubers will get it early so they can offer you their thoughts too.

Doesn’t add up against the Chaos Warriors’ price though?
You may have seen our blog on this before, but essentially Chaos Warriors were additive to the content in the main game already included for that Race, so the DLC adds to and makes playable what is in the base game. Beastmen are a new Race to the game, there’s not a significant lump of work already done that we’re adding on to.

Where are the Ghorgons/Jabbers/Harpies?
As with the other races we can’t include every unit unfortunately. Mostly this is down to time and cost and as nearly every unit is unique and often very elaborate, we get to a point where the price for the player just gets too high. For example, adding the Jabberslythe alone would have been as costly as all the artwork that went into Charlemagne.

We’re always looking to get the balance right though, and will be looking at all the feedback.

Can’t I have them rather than the new campaign?
While that might seem obvious, it’s not an even trade for us given the different members of the team available (campaign map artists and character modellers are different people for example). And we took the decision that adding a significant chunk of new gameplay with a new campaign would be worth more to more players in the end. Judging the balance of content is always something we’re looking at though so it’ll be interesting to see what players make of it.

What magic do the Beastmen have access to?
Death, Beasts and their own unique lore, Lore of the Wild. The latter two lores introduce new summoning spells to the game – Lore of Beasts wizards can summon Manticores to battle and Lore of The Wild Bray-Shamans can summon towering Cygors.

Can I play MP verses a friend who has Beastmen and I don’t?
Yes, everyone will get the Beastmen data so that they not only appear as a new adversary in the game, but that you can play co-op MP campaign or MP battle with someone who owns it.

Formal disclaimer: any views or opinions expressed here are those of the poster and do not necessarily represent the views or opinions of The Creative Assembly or SEGA.
beastman_campaign_map_sml.png 3.8M
beastmen_beastpath.png 3M
Flag 21 · Disagree Agree
«1234567…13»