Zerca Registered Users Posts: 89
October 2017 edited August 12 in Warhammer Campaign Feedback
For all TL;DR: Suggestion for adding two playable pirate factions(Sartosa and Vampire coast) and sea fight mechanics into the game as a huge expansion of Warhammer II and Mortal Empires. The suggestion is quite detailed and therefore you do not have to read everything, anyway I would like to know if you like the idea in general. Just give me a like or whatever

When I played Warhammer 2 the first time, I think the dimensions are absolutely gigantic. You get to see 4 new continents, in between a big ocean separating them. At the moment sea battles are rather lame. I would really like to sea fights like in Empire Total war, or Shogun in the Warhammer style. It’s a shame ‘Warhammer 2’ is not releasing its full potential. Maybe this idea isn’t on the first look that outstanding, but imagine all naval related game elements were expanded to a level in which even the Seas became actually interesting parts of the game. Besides that, it would be really nice to see that the existing factions were extended with other, Warhammer related and highly sea driven factions giving the world map more diversity. Probably, someone else has already posted about missing sea battles; see that here, as in extension. In my opinion I think the game could certainly need some ‘pirates of the Caribbean’-esque stuff: E.g. The free city of Sartosa, a Pirate faction or Luther Harkon’s undead Pirate army at the Vampire Coast.
In this post I want to tell my suggestions for a huge expansion (or several smaller, which I won’t prefer) adding naval fights and more strategic options and two playable factions for Warhammer II. This add-on focuses much on the new World than the old, therefore, everything mentioned might be part of the Mortal Empires campagne, but it focuses at first on Warhammer II Into the Vortex Campagne.

At first, I start with the suggested factions, tell about how I imagine them on the strategic map, in land battles and then I want to tell my idea of Sea battles and new naval strategic-Map options. Everything what follows now, are ideas, partly lore conforms partly just made up. I refuse to write “would” and “could” everywhere since I think it stops the reading fluency, just see it more as an complex idea box, I made up myself or unconsciously steal from others (which I don’t hope and if so I’m terribly sorry, I try to mentioned it then). Used pictures were assisting but I do not own anything of the content. I try to highly focus on lore, the existing Warhammer related table top games and figures, but more on their appearance than their actual function (which honestly I do not know directly, tell me if you know more or want to extent this idea box) .

All pictures were owned by their respected owners. If needed, i would like to present a full list of sources. The pictures were used to get an idea how the troops might look like or what would be a suitable appearance for them respectively. Some pictures were used in favor of lifting up the post with artstyle. If the Artist do not want to show them here, i will remove them as fast as possible.

Everyone who reads certain passages, and knows more or got a better idea for it, can post it here

The new races/factions are less focused on building an empire or conquer whole continents, than gaining power by controlling certain positions. The Pirates resemble somehow the norsca faction, eventhough they are less destructive. As player of other races, one might get annoyed about the presence of this faction, but would never fear that they get too powerful

In the game there are already for example the Pirates of Sartosa which at the moment, only look like a form of empire units. Looking into the lore of the game, Sartosian Pirates were a several different mercenaries and pirates. Former Empire men and Bretones, Estalians and Tileans, Araby but also even beastmen or orgres, orcs and other grimy guys, everyone who gave up their previous live and culture for the pursuit of greed and prosperity. I would really appreciate to see a faction of them.
Since the Pirates do not have any kings or Emperors, one of the main mechanic Is to gain and retain power over your “pirate armies” every Lord can be greedy, turn against the player unless he is powerful enough and keep a good relation towards them. If you do not react to their needs, they turn against you, and you have to fight your own army with a loyal one. What could be their needs? Pirates like easy lives. Money is important, but sometimes they want special goods. Establish and keep trading routes for certain goods or be able to plunder the said resource, will retain your power over this army. Also, they might have a certain quest for you, finding a certain treasure, attacking a certain harbor and conquer or plunder it. See more in Finances and loyalty
Pirate lords were the leaders in their home harbor of Sartosa. It would be nice to see them as commanders. One of their legendary lords could be Captain Blackheard. The player only has to keep the loyalty of their inferior pirate lords.

Conquering
Pirates only conquer harbor towns, or regions in a possession of a harbor (the whole region, but it needs at least one harbor slot. Other provinces are not part of their aim and just can be pillaged or ‘freed’. Freeing a province mean that the given city is independent then, but still they have to pay a Dane geld. Unlike a vassal hood, they are not directly your military allies, but are at least forced to have a trading agreement with yours.
Pillaging has the advantage that you can directly control how much loot will be given to you and the fighting pirate lord.

Finances and loyalty
The pirate units are quite cheap in early stages, but as they soldiers become more powerful, they start to want more money and are more likely to lose their loyalty if it is missing. Unlike other races, these pirates do not suffer from a malus (increase costs) for more armies in your control. But because your pirate Lords seem to want some special treatment, costs rises dramatically. If you support one, others get envious. Lords which fight a lot for their Boss want more extra prestige (money, solving quests … see above.). High Loyalty has also an impact towards the pirate’s moral in combat.
Losing to much of the loyalty turns the army against you. It is as long out of your control as long you do not defeat them in a battle. Winning the battle turns them back towards you and resets their loyalty.

Buildings
Pirates like to pillage, not building big cities. Sartosa is the only big city they have, here they have plenty of buildings, and most of them are for their military forces. When they conquered Land they can only reach a building level of 3, and mostly use these harbors and surrounding areas for gaining resources. Beside pillage, their only way to get some money is trading and therefore creating resource developing buildings.

Trading and smuggling
Having an official trading agreement might be easy and save for a functional economy. But sometimes, you might need some extra money by less legal ways. Smuggling is working like a forced trading agreement, in which you either get out or smuggle in certain resources, with out paying the obligatory duties. The Player which you engange with smuggling will not profit from the trading agreement, but might get certain needed resources. The pirate on the other hand will earn much more than in a trading agreement. Unfortunately authorities were quite aware of the smuggling and it will slightly downgrade the relationship between each other. Be careful, which one you diddle.

The armies of the Pirates are not in possession of cavalry. They can’t keep them on ships, so they need to attack by foot. But what they really like are their gun powder and sabers and combination of infantry types. E.g Orgre Canoneers were quite flexible artillery but also are hard to defeat in close quarter combats. Sneaking skirmishers, a cloaked close quarter infantry, have the ability to throw burning rum bottles before entering the combat. Pistoleers were mid to close range infantry which were quite the same as free company troop, which shoot and were quite good in fighting in close combats. They lack on many heavy armored troops, but they balance that with their swiftness. Their multifunctional army makes them flexible, but also weaker in their individual abilities.
It might be possible, to add dogs of war units as long as the pirates pay enough. These would be some kind of legendary units.
I present some of the table top figures, some of them belong to other pirate factions, but I think this is enough to get the idea of them. 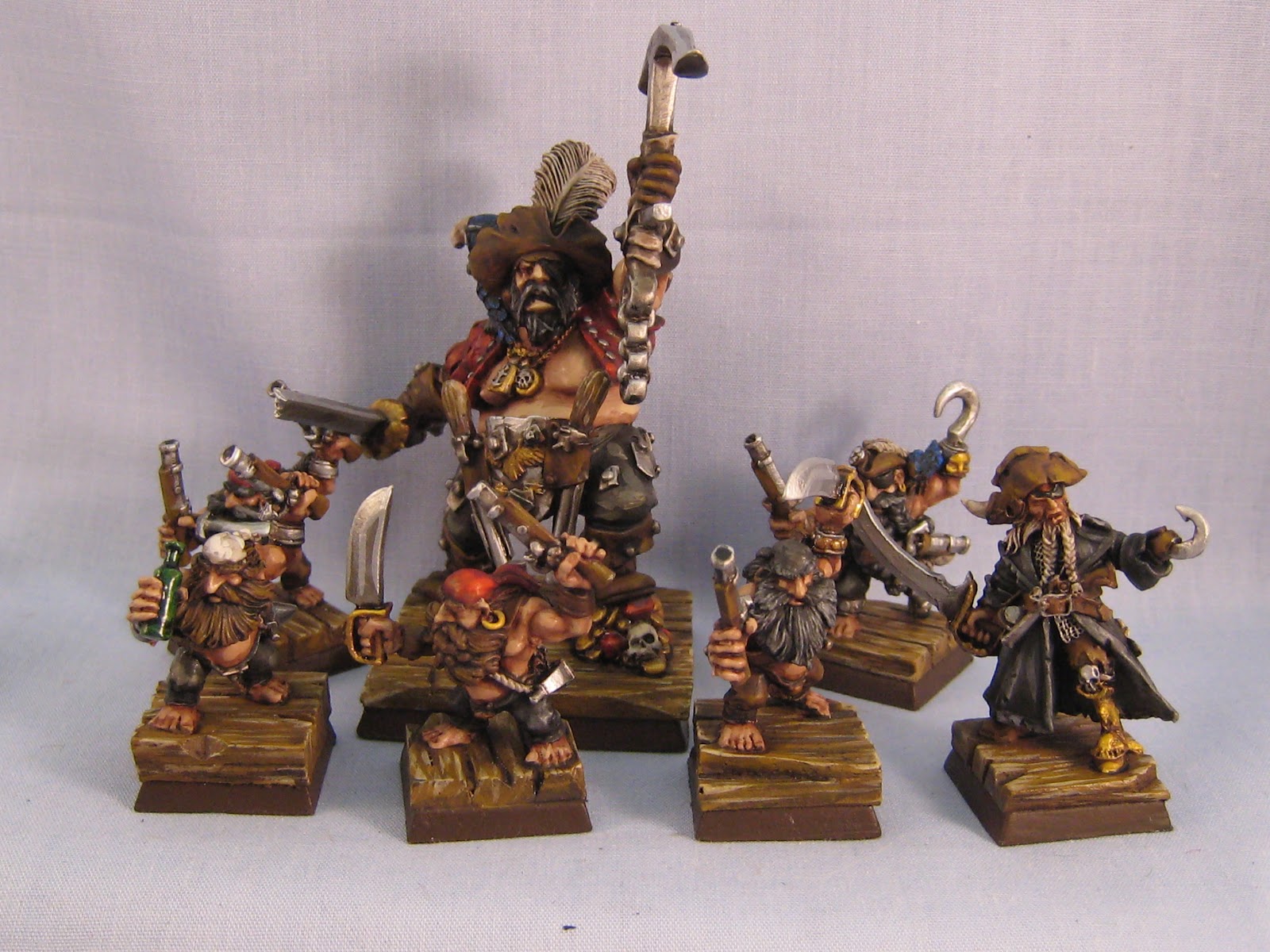 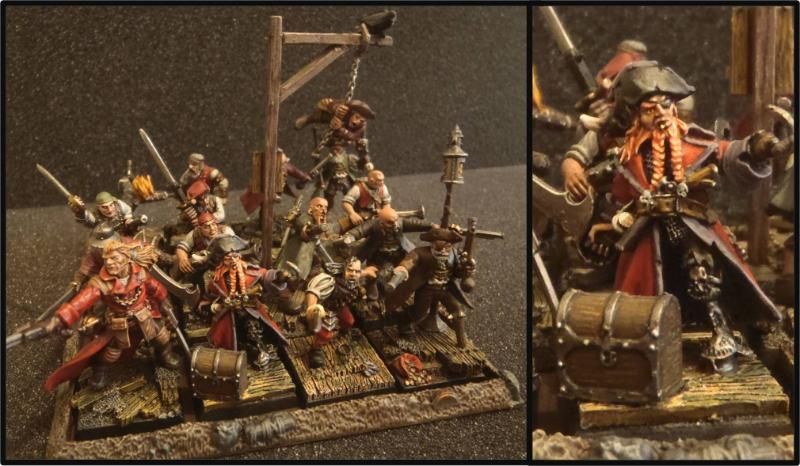 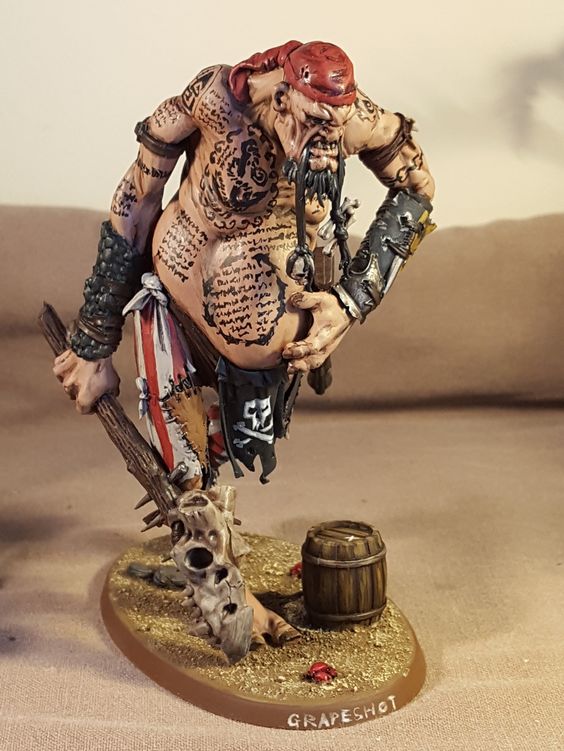 Even the biggest become a pirate if the money is right.