Benjin Junior MemberRegistered Users Posts: 256
June 2018 edited June 2018 in Community Content
Wasn't sure exactly where to post mods for ROME II on this forum, so I put it here since modding is community-related.

I dedicate this mod to my dad for Father's Day; by his request, I implemented his likeness into a game. I created a completely new model based on a 3D scan of his head, along with some textures (diffuse, normal, specular, gloss). Even though I'm not a dedicated character artist (I mainly focus on environments and props for my 3D work), I still tried to capture roughly the same amount of detail as a regular head in ROME II would have - if I put too much detail into it, then he'd stick out like a sore thumb, so I had to strike a balance. His head can also blink his eyes, move his mouth while speaking, have decals (e.g. blood splatter) projected onto its material etc.

He is featured in the historical "Battle of Cannae" scenario as the historical Roman commander "Gaius Terentius Varro". He is also the older variant of the new "Rom_General_32" uniform for all Roman factions, which spawns randomly. His uniform's younger head is a placeholder - it will be replaced with another new custom head asset that I'm currently working on (learning from some topology mistakes I made doing the first one - specifically around the mouth area)...

Aren't you tired of how the vanilla general characters look in Total War: ROME II? Is your immersion broken when you see a character who is 80 years old yet still looks like he's 30? Or how about when they're trudging through the snow without any kind of winter clothing - mustn't they be freezing like that? Aren't you just bored of how campaign characters always look the same throughout all your campaigns and have always wanted to give them some better looking gear to fit their increasing rank / status?

Then look no further! This general mod - like none other before it for Total War: ROME II - will solve all of the above for you.

This is the first release - in potentially a series - of campaign agent character mods with the aim of providing players with characters that dynamically replace their appearances with alternating variants based on three attributes for all campaigns.

These three attributes are: As such, there are literally thousands of variations for Roman general appearances (around 2,900, just for 38 characters!) , giving a lot more variety to your Roman general characters on the campaign map and on the battlefield. 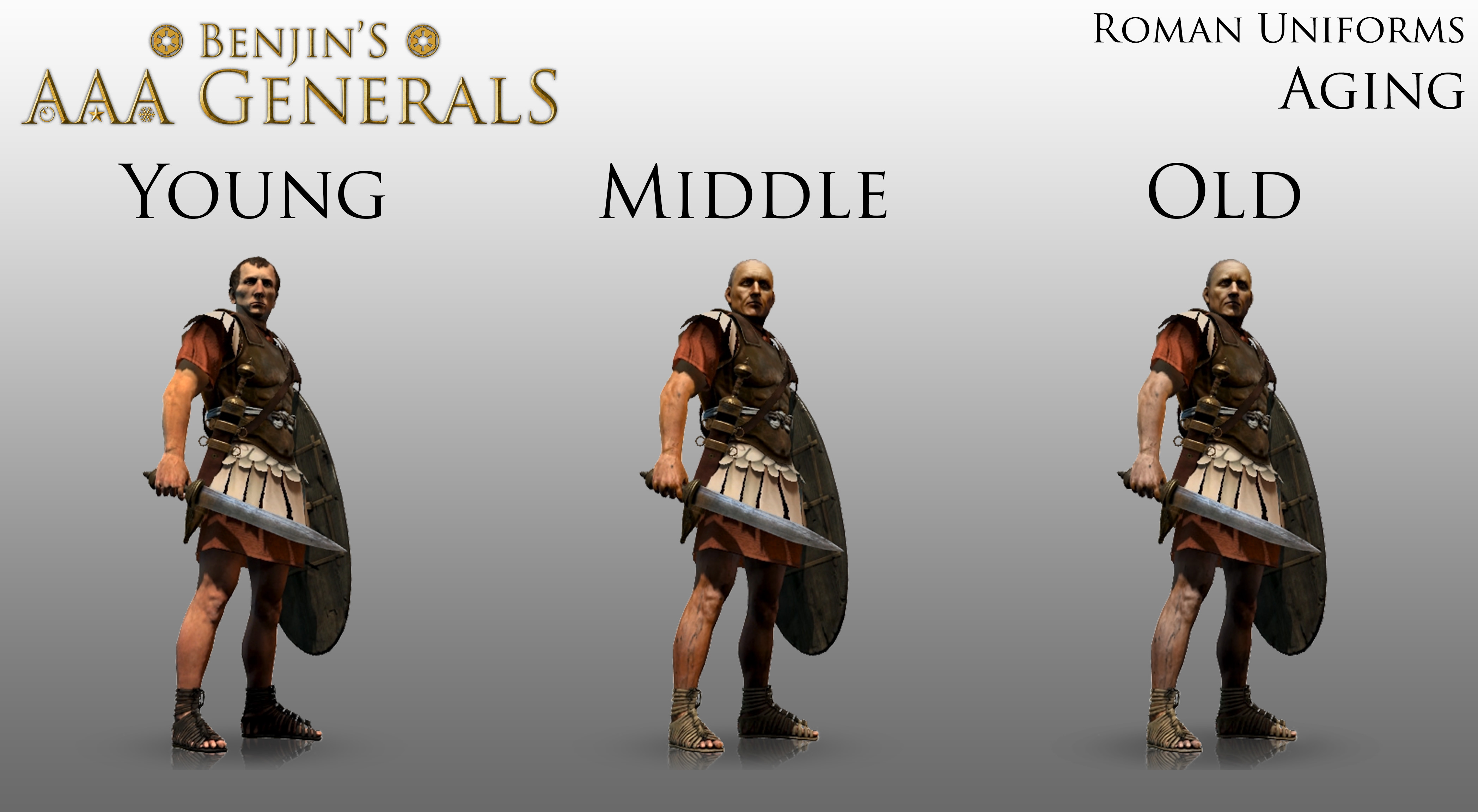 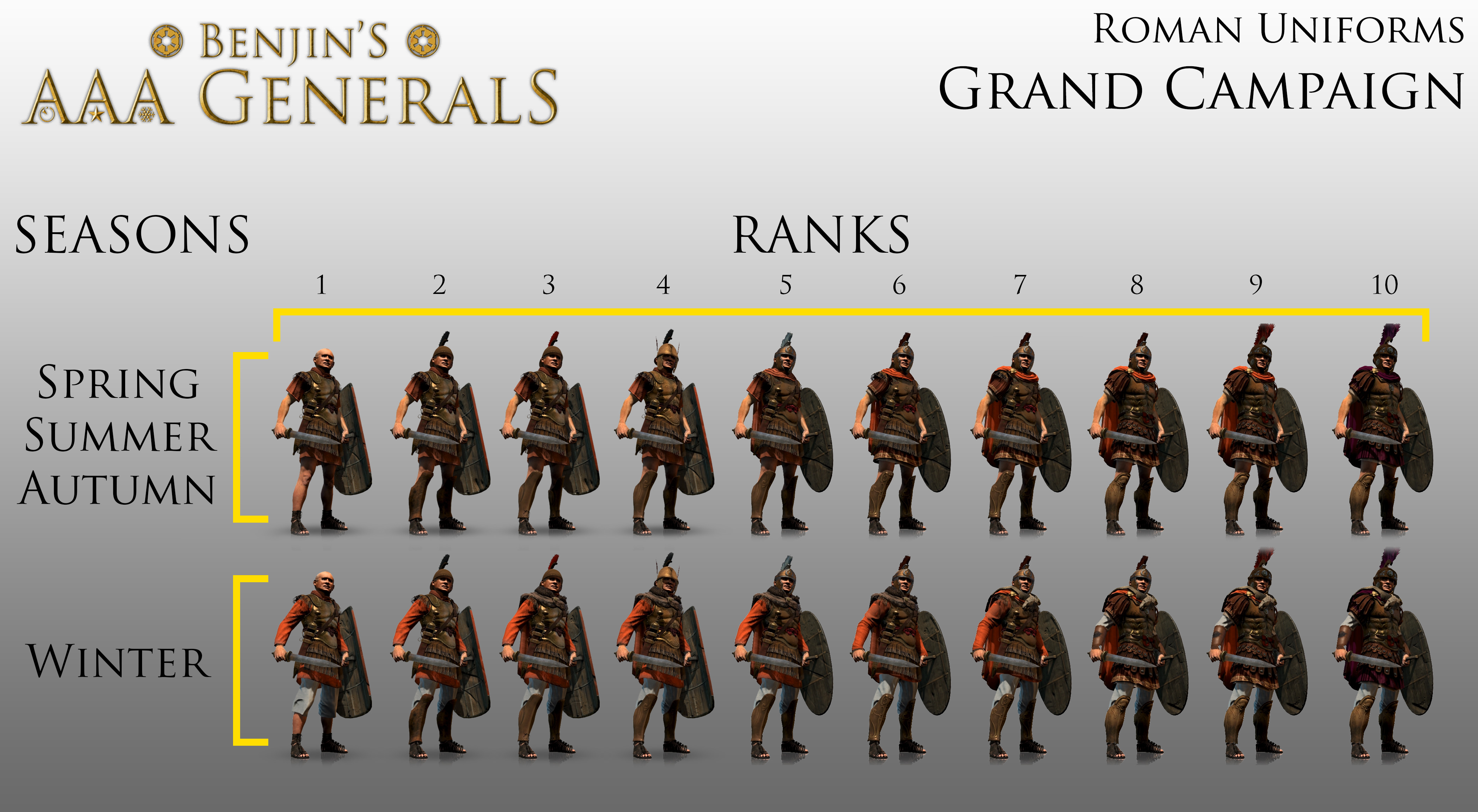 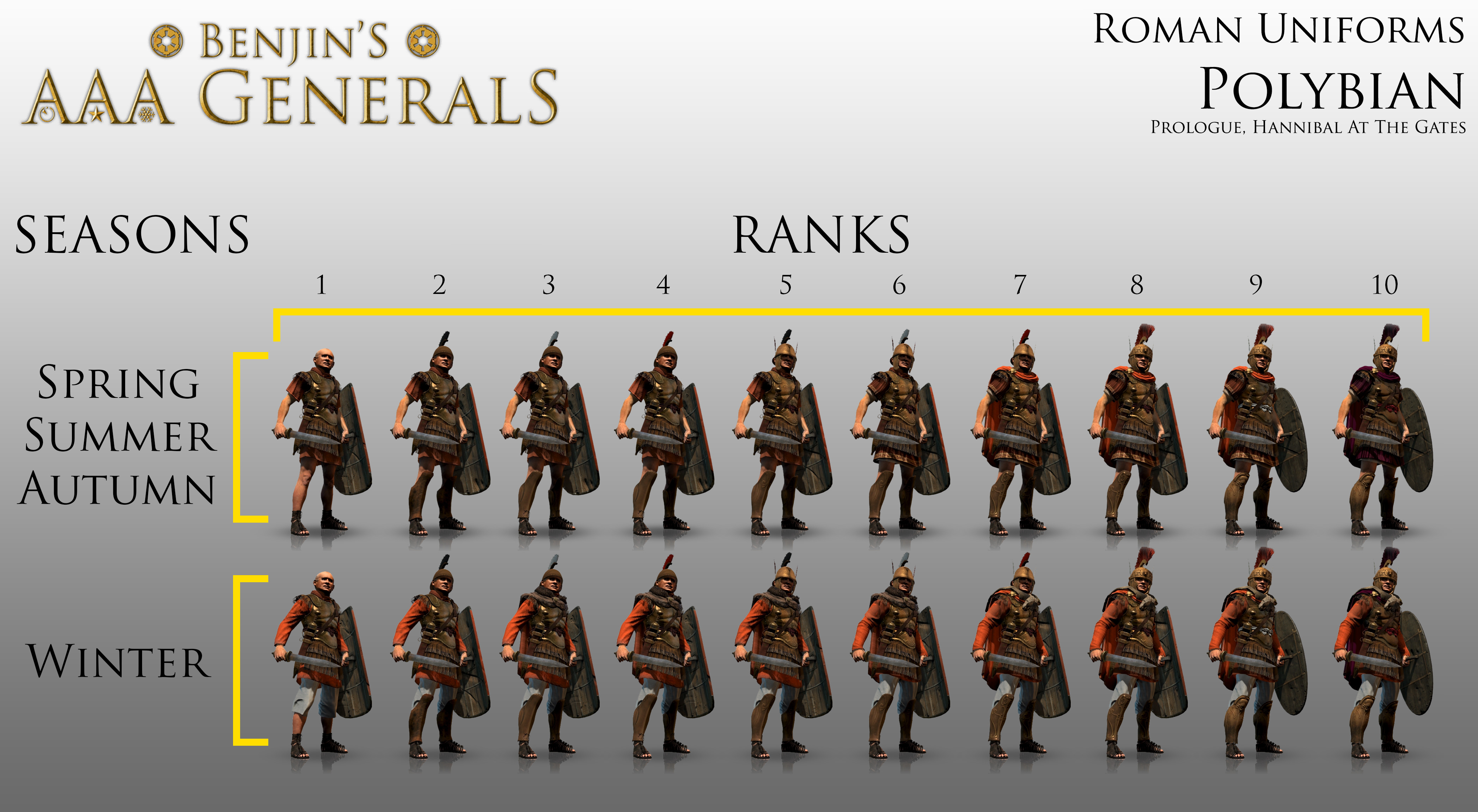 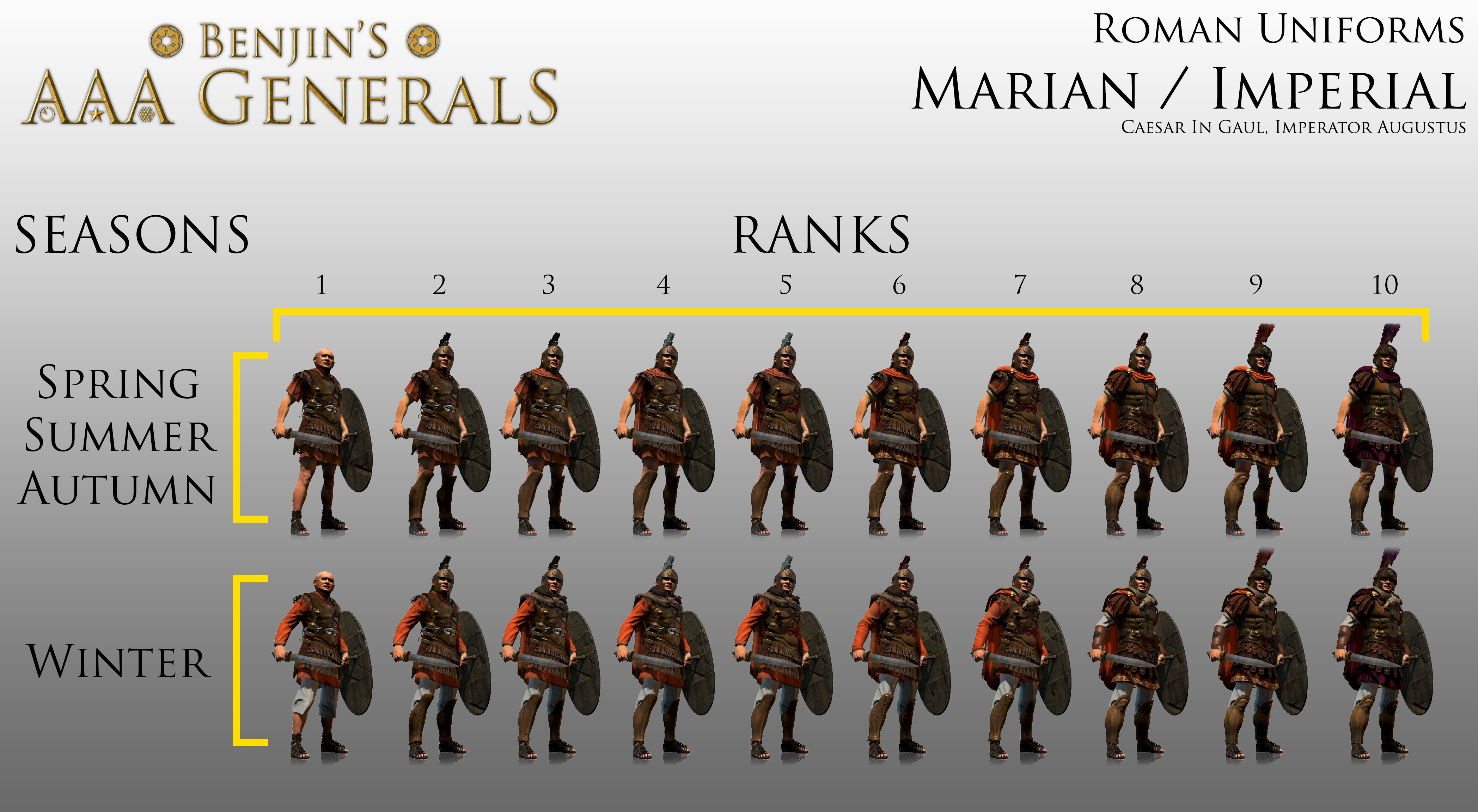 I wanted to start with Rome in particular because they are pretty much the focus of the game, and the vanilla appearances of them looked pretty bad in my opinion. They're also a special faction to start off with, because I decided that they should have not just one art set but two - meaning twice the amount of variants compared to any other faction. This is because I wanted their appearances to match the correct appearances they would have had in each campaign, and also show off the evolution of their equipment in the Grand Campaign. In the DLC campaigns (e.g. Hannibal at the Gates), the Roman factions will only wear one of these art sets belonging to their time periods, adding more historical authenticity.

This mod was designed for compatibility in mind and is therefore compatible with all overhaul mods (e.g. Divide et Impera) - no need for separate versions. However, there are a lot of overhaul mods out there and I may not have tested them all. If you find anything that's wrong, let me know and I will try to fix it.

Rome are the first playable culture group to have their generals done, since their vanilla general appearances were in such dire need of replacement and most people will encounter them in their campaigns as a faction opponent anyway.

Even though the mod is released, there are a few parts where a bit more work requires attention. I haven't finished all of the Roman women's appearances yet and I also want to create one more new custom head. I also want to tweak a few more of the existing VMDs, such as adding new, custom hair for the Romans (the vanilla Roman hair quality was terrible so I didn't use it). Lastly, there are a few minor clipping issues I would like to resolve as well.

But, after that's all done, I plan on making more AAA generals for different factions (e.g. Ptolemaic Egypt, Carthage etc). If you want to see a particular faction receive the same treatment, you can vote here.

Thanks for reading and (hopefully) rating + subscribing the file on Steam Workshop! I put a lot of my free time into this, and am glad it's finally done for all of you to make use of.