AgentGB Junior MemberRegistered Users Posts: 491
March 2019 in Napoleon: Total War
Looking at the amount of feathers in CA cap accumulated over time, the ship battles, mechanics, and immersion, the titles have been going from strength to strength with each new title adding more mechanics to the toolbox, and looking back on older titles, in this instant Napoleon Total War, I can see a lot of potential for a richer and more historical in depth Napoleonic setting Total War game. Rome 2 was excellent although the ability to overlap pike formations made for some exploits, the overall faction variety, unit rosters and immersion will prove it to be a timeless classic. The Warhammer titles are again absolute masterpieces with clearly the highest post count in the forums, although the balance understandably can be lob sided from faction to faction it is also apart of its charm and lore that makes you appreciate every single unit has a games workshop model with its excellent textures and models that out do my own 1400 point army. I'm in no doubt that if CA decided to make a Warhammer 40k set game, asides from some of the obvious difficulties of how unit sizes are deployed e.g 10 man squads, if keeping close to the tabletop rules, I think in a Titan setting war, it could all be scaled up, not to mention how CA could do fleet battles.

But for now why i'm here, to try and lay out some ideas for another beloved although in comparison to Warhammer, quite a niche title, which is Total War Napoleon. Although it would take Hollywood to make a movie based during this setting around a pivotal battle to bring the hype back to this era, or a relaunched of the Sharpe series, I'm still surprised at how many people do still have a keen interest in this era and for this reason have submitted below a bunch of ideas using the Total War Formula while attempting to portray more of the historical context from the time. These are all just suggestions and ideas, and aren't necessarily something I'm writing in stone since I'm quite aware CA or other Fans could create or suggest far superior ideas that promote the mechanics of the era while trying to stay true to the Total War formula. But to get us started in this lonely section of the forums, grab yourself a cup of tea, try to forgive the bad grammar and spelling mistakes, but more than anything if you see a better way of implementing ideas into mechanics please give your examples so we can turn this into a think tank of sort to what would work, what casual players and historical players are willing to accept in complexity before the game breaks from the Total War formula.

I' add, that the warhammer series is by far the most complex of the Total War series in certain regards, but the continuous tool-tips turn it into an absolute breeze and I do wonder if for another Total War title, if it could be pushed ever so slightly further that it will define a whole new dimension to how battles are fought. In order to get the full context of what i'm suggesting, i'd advise to try and read through the whole thing, since I tend to offer multiple ideas to tackle a certain type of mechanic and you may read the initial idea and think “that horrid” and then stop reading altogether missing the alternative idea.

Stalk ability (in TW:WH terminology): The theory behind this, is that the General will only become visible within a certain proximity to enemy troops. This will reduce long range sniping with artillery allowing the General to better support its forces. Although in single-player the General position may be more predictable to guestimate when force firing on a position, the stalk ability mechanic akin to units in WH:TW will help multiplayer making General sniping less fruitless unless reconnaissance is done to locate their position. Also like when units are “discovered” in their hidden place, the player will be alerted to when the enemy can see their General allowing them relocate their General position.

Historical context: Although some Generals enjoyed dressing quite unorthodox in order to stand out in the battlefield so that their men could see them and while attempting to snipe Generals was a valid tactic. The overall reality was with the many tens of thousands of men on the battlefield it was the units colours/standards/uniforms that would have been more than likely identified for target priority in the sense of actual targets that can be seen and reasonably hit then attempting to target a single man on a battlefield. 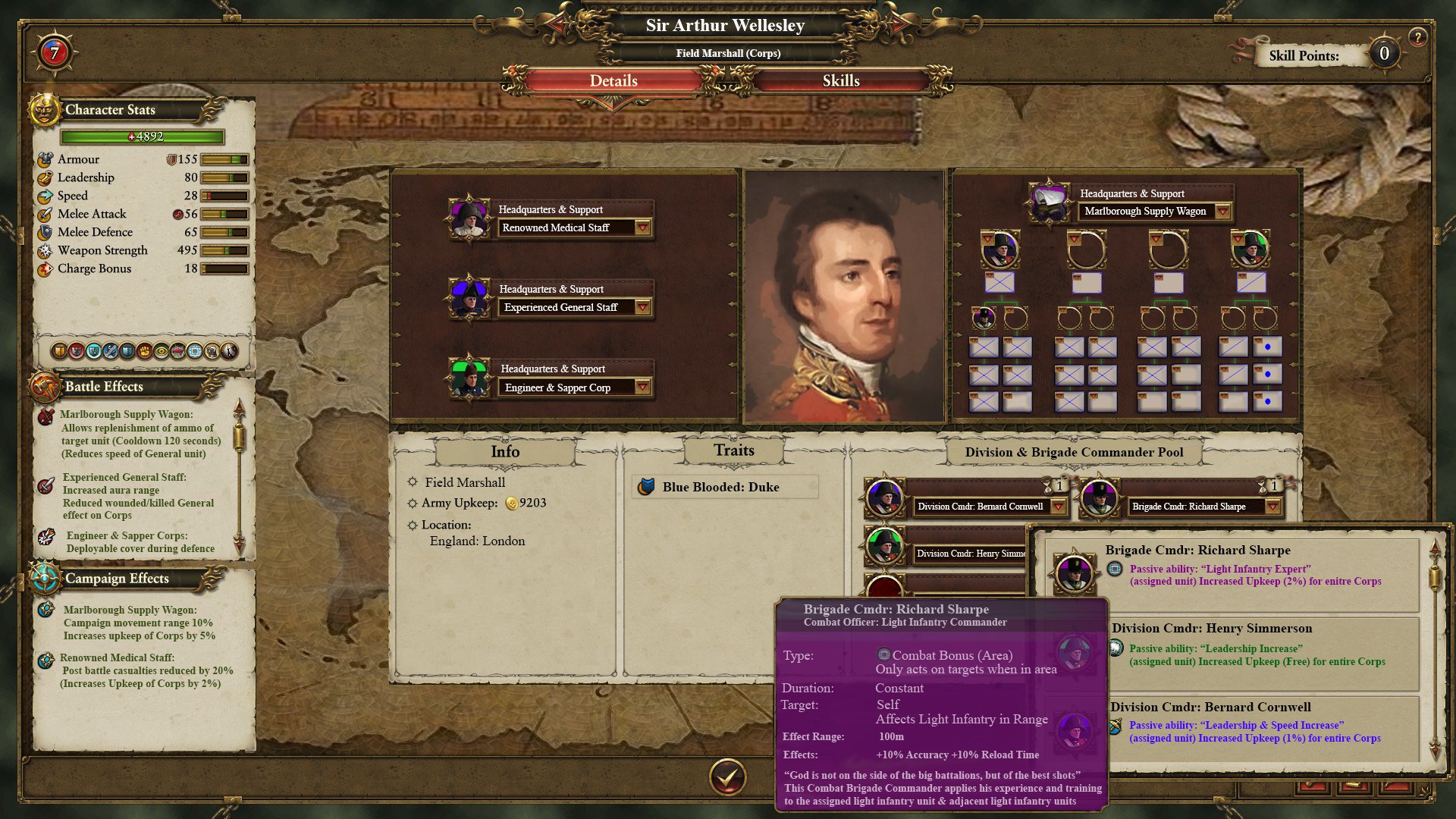