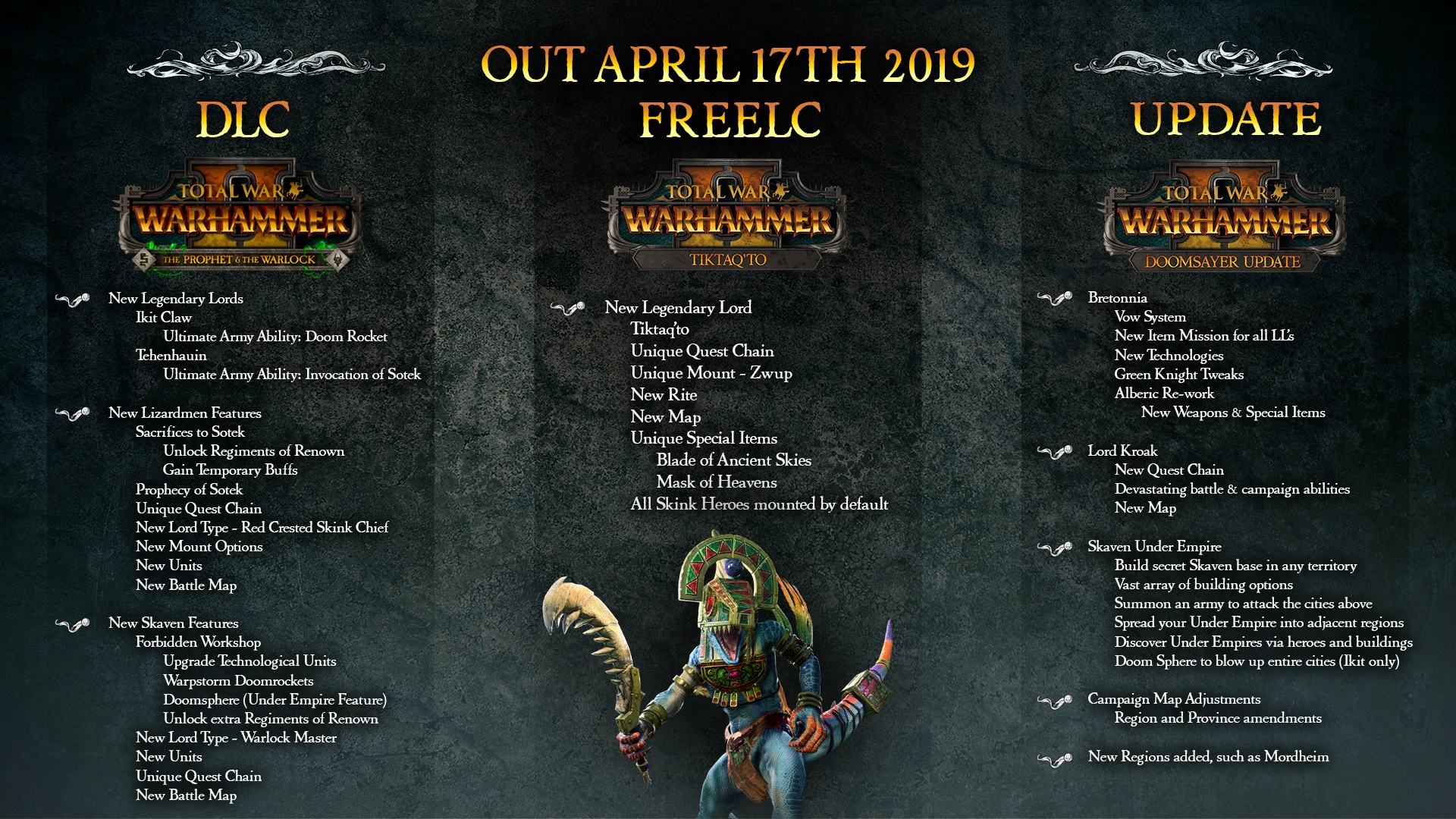 While the site is still feeling the effects of the Skaven horde, here's a plain text version of the patch notes:

TOTAL WAR: WARHAMMER II PATCH NOTES: THE DOOMSAYER UPDATE
This automatic update arrives alongside The Prophet & The Warlock Lords pack, bringing a huge array of content additions, revisions, balances and improvements to the Eye of the Vortex and Mortal Empires campaigns. Ikit Claw and Tehenauin’s factions of Clan Skryre and the Cult of Sotek now appear in both campaigns under AI control, even if you do not own The Prophet & The Warlock.

Given the influx of new lords and factions over the past year, the Doomsayer Update heralds a major overhaul to campaign balance and AI behaviour, in an effort to level the playing field. The update also adds multiple new territories to both the Eye of the Vortex and Mortal Empires campaign maps. These map revisions will be active in all new campaigns you begin after the update (they won’t appear in pre-update saves).

The factions of Bretonnia also get a significant rework, addressing their buildings, techs, diplomacy, the Green Knight, and much more. And Alberic D’Bordelaux is now fully resplendent and armed with his mighty trident The Wrath of Manaan (plus a new animation-set to wield it with!).

And a quick note on modding: when The Prophet & The Warlock launches, the Assembly Kit will not be able to process Startpos files. This is something that will be fixed with a small launcher update, which we are aiming to publish next week.

UPDATE HIGHLIGHTS
Massive balancing pass to how campaigns play out – see Campaign AI Balancing section below for details
Multiple new regions and provincial changes across the world in both Eye of the Vortex and Mortal Empires campaigns
Notably: Added new region of Massif Orcal in Bretonnia and multiple new regions in the Empire, including the Ruin of Mordheim
AI Vampire Counts factions can now gain Bloodline Lords, with specializations for some factions:
Mousillon will focus on Blood Dragon lords
Necrarch Brotherhood will focus on Necrarch lords
Strygos Empire will focus on Strigoi lords
Silver Host will focus on the female Lahmian lords
Added 15 new island map variations across the world
Added multiple new Ritual Currency locations in the Eye of the Vortex campaign to better support the amount of new factions participating in the race
Added new location map button on the Lord selection screen so you can see where factions start when choosing them
Lowered the availability of most agents for all factions to tier 3 or below, capacity remains unaffected
Added Feral Cold Ones as a recruitable unit for all Lizardmen from the Dinosaur Reserve building (animals resource chain)

CAMPAIGN CHANGES
CAMPAIGN AI OVERHAUL
Removed autoresolve bonuses for playable and horde factions controlled by the AI
This is a massive change that is part of our ongoing campaign balancing plans. Given the number of playable Lords across the world now, we feel a new approach to balance is required and our old method of using auto-resolve bonuses is no longer sufficient
As always, we’ll be closely studying our metrics and player feedback regarding campaign balance to make sure this change alongside the other balancing is performing how we want
Restructured budget allocation across the board (AI will spend its money more efficiently)
Increased general spending options in income allocation (AI will tend to spend its money more than save it)
Removed preferential public order bonuses for AI and improved their construction management system for public order control (AI no longer gets base-level public order buffs and will instead handle it much better!)
Reworked occupation option selection for Vampire Coast factions (VC AI will now sack, raze and establish Pirate Coves more often and occupy less often, greatly influencing their impact on the campaign and making them much more thematically aligned)
AI will no longer build multiple surplus buildings (For example, Alarielle won’t build too many Handmaiden buildings, Vampire Coast factions won’t build too many extra recruitment buildings, etc)
Reduced the AI’s likelihood of embedding multiple agents in the same force, instead spreading them across multiple armies
AI Unit recruitment templates upgraded across the board for Empire, Bretonnia, Skaven, Dark Elves, High Elves and Lizardmen
High-Level view of observed AI balancing across the board is as follows:
End Game variance has been improved
Matchups are less one-sided in many areas of the map
Vampire Coast impact and average strength rank greatly reduced
Multiple Vampire factions performance visibly reduced

SKAVEN UNDER-EMPIRE
When conquering an enemy settlement, Skaven armies now have a new post-battle option. Alongside Loot & Occupy, Sack, and Raze, the army may now choose to Expand Under Empire. This leaves the settlement intact but establishes a new Skaven undercity beneath it. With four building slots, an undercity is a powerful addition to your infrastructure, but the more it is developed, the greater the risk that it will be discovered. If discovered, it will be demolished.

MISCELLANEOUS CHANGES
Adjusted all Lizardman and Skaven unit textures for consistency
The strategic location icon now matches the style of the landmark building group icon (an obelisk)
Removed Reiksguard smith requirement
Fixed the Red Duke to use the Blood Dragon version of the Barded Nightmare in campaign to match with Custom Battles
Added cooldown display to all agent actions with a cooldown
Fixed an issue where low loyalty advice would trigger on a Legendary Lord
Fixed a number of followers that were not dropping
Fixed Gunnery Wight Hero not having the Bomb Throw ability
Updated all text references of Skaven Underworld to become Skaven Under-Empire
Blessed Spawnings: when you begin a new Lizardmen campaign after the Doomsayer update, There are now 4 different mission types for Blessed Spawning missions: Battle captives, Kill Entities, Raze/Sack, and Defeat X Armies. Each of these mission types has a common and a rare variant. Variants have the same conditions for completion but the common variant rewards common units and the rare unlocks uncommon/rare units. These missions should not be active at the same time. Furthermore each mission type has 3 campaign stage variants, for early, mid and late game. All these do is change the mission requirements to complete them: e.g. kill 500 in the early-game, kill 1500 in the late-game, etc. This makes for a total of 24 potential missions for Blessed Spawnings.

BATTLE CHANGES
Alberic given new Trident weapon and animations
Removed Barded Warhorse option from Custom Battles for all Damsels, to match with mounts on offer in the campaign
Fixed some cases where skipping the intro cutscene in a quest battle would not centre the camera behind the player’s army

AUDIO
BATTLE
Added new group vocalisations for Skaven, Skinks, and Saurus
Ratling Gunners will sometimes be overcome with verminous glee when firing
Reworked and fixed multiple areas of group system
Ranged units now play group idle vocalisations
Fixed some issues with units disengaging from melee, or moving through each other, where they would retrigger the collision group Foley
Added a new Active Casting system for the Screaming Bell, Ark of Sotek, and Engine of the Gods, changing the audio whilst that unit is casting a spell
When casting, the Screaming Bell now makes bigger bongs to please the Horned Rat
Added new Warp Lightning firing and projectile sweeteners and for Bonebreaker’s melee attacks (more zap-zap!),
Added new melee impact sounds for two-handed hammers/maces
Cut out the tongues from the Council Guard (keep Council Secrets safe yes-yes…)
Disabled some non-Slaanesh god-specific lines for Sigvald
Changed the attenuation of conversational dialogue
Fixed battle order VO suppressing unit vocalisations
Rebalanced some ability sounds