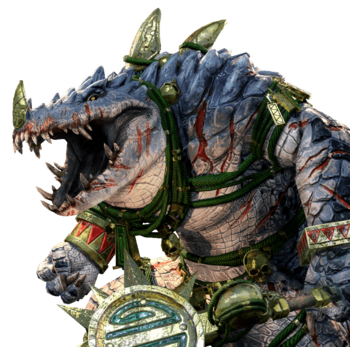 In this post, I will be proposing certain changes to the way that Nakai Horde faction operates. I will be addressing certain observations that I've made between playing and then watching a couple of let's plays to confirm. First; Nakai's relationship to his vassal isn't neither antagonistic nor complementary enough; it feels empty. Second; decision-making weighs too much in the direction of not wanting to make too many enemies, when Nakai seems like he should be able to be a bit more reckless, without going completely crazy and declaring war on everyone.

Right now, whenever you plant another temple city, there's not much interesting that happens; you paint the territory a particular color and you get the favors associated with it. But then, really, very little happens. So, here's my proposed change.

Whenever you take a settlement, you can give it to one of three independent vassals; The Cult of Xholanka, The Cult of Itzl and the Cult of Quetzl. They are all loyal to you, but they aren't necessarily loyal to each other. They all have their own interpretation of the great plan and they may come to blows and Nakai can only step in to batter them back in line, but not stop them from bickering and they're not exactly strategic masterminds.

Whenever they conquer a region, they make a temple city the same as Nakai does, but always for their particular god, causing Nakai's temples to rise. But if they conquer each other's regions, that also means that Nakai's temple totals will change, potentially prompting him to lose access to 'favors' from the gods. This keeps the vassals of Nakai more dynamic and gives you a vested interest in keeping them from attacking each other too much. You don't have to declare war, ever, you can always walk in and pummel them, but it will come at the cost of your diplomatic standing with that one faction and will penalize the income they're willing to give you to supply your Horde.

Herding Cats: All Of the Lizardmen Conflicts, Always

As CA has shown, the lizardmen don't neccesarily agree with each other on what the next best course of action is. They're following imperatives set for them long ago and over the eons, they will come to differ. They are their own immovable objects and unstoppable force, at least as long as a slann doesn't stop them or maybe especially if a slann is involved. Nakai, on the other hand, seems to be more in tune with current events and shows up where he's needed most.

So, here's my proposed change; Nakai is a simple mind. He goes where he's needed regardless. But clearly, he would have skinks to help him see where he's needed exactly. So, he has a couple of diplomacy mechanics that are unique to him; Firstly, he can give away the regions of his vassals to other lizardmen factions that neighbor those vassals. This will raise your reputation with the faction you give the region to. The temple stays and becomes the town center for the new faction, keeping your temple totals the same.

Why do you need that diplomacy? Tribute.

Turn by turn, other lizardmen factions can be demanded regular tributes, but only if you've already agreed to a defensive or military alliance with them. This represents that this lizardmen faction is on board with you coming in to wreck house on their behalf. The better your standing with that faction, the higher the tributes. But this also means that, whenever Nakai's allies declare silly wars, Nakai has to weigh whether it's worth it to him and potentially lose tributes if he declines to join that war. This represents that Nakai finds his own way in the world and wanders from place to place, where he thinks he's needed most.

Summoning Nakai: Spirit of the Jungle

So, from all of the above, you can get the sense of what I'm proposing. Nakai is thrown in the middle of a lot more conflicts where he gets to wreck house. He's constantly dragged into stuff he might not want to be, but he goes along with it because he has. That sounds like a recipe for disaster, since you can't be everywhere at once.

All of that is true. But now consider this; what if we follow the logic of Nakai's intro to the campaign. What if Nakai has the Lord-unique travel option of being summoned?

The way this would work is that his agents serve two functions; they can help him buff up his Horde or they serve as his vanguard. Wherever you can find an agent of Nakai, Nakai could be right behind, even if he's on Albion and the agent is in Lustria. How? The "Spirit of the Jungle". This would be a favor that requires no temples to be used, but requires, let's say, 50 favor.

Whenever you pop this and you end your turn, the game autosaves and then you are prompted to select one of your heroes to teleport Nakai to. With this ability, Nakai can quickly switch from defending Tlaxtlan from the Blue Vipers, to destroying the Skaven alongside Tehenhauin. This changes the pace considerably and reduces the effects of being in multiple wars at the same time (since opposing armies might not be able to even reach you let alone fight you), while increasing the number of fights Nakai will get into.

This compensates for the fights that Horde factions usually get as a source of experience and battles. This is also a Nakai-only ability. If you want to maintain multiple fronts, therefore, you have to create a new Horde first, so you can go where you're needed.

What do you think?