Celdaric Registered Users Posts: 8
November 2019 in Campaign & Battle Bugs
Hello, this will be a lengthy explaination but hopefully it will all make sense. And just to start of with saying, the game is completely unmodded and completely reinstalled since 3 days ago, and all the graphic-drivers are up to date as well

Firstly, the missing text on event-choices.
When you get events pop up that are both general ones or race-specific, and which have choices, they would all show the different options in the form of colored bars (color changing due to faction). Underneath each of the bars would be a symbol of some kind, symbolizing the reward. Hovering over this symbol would display a small text telling what the reward was, but that is not the problem I am experiencing.

The problem is that the text which would appear when you hover over the different choices, no longer show up. This text would be kind of a lore-related explaination behind the choice, not so much as telling about the reward but more of the motive behind this particular choice.
I included a screenshot from an Avelorn-playthrough in the Vortex Campaign which had one of the race-specific events pop up (sorry for slightly pixelated text but it happened when I reduced the size of the image). The mouse-cursor did not show up in the screenshot for some reason, but you can see that I had it hovering over the top-left choice, Employ The Messenger, which is highlighted.
If you have seen the text that is supposed to accompany the choices in these kind of High Elf-events, you know that it is all about either political powergames or how the Phoenix King can basically do whatever he wants

I have had this kind of issue in both Vortex and Mortal empires campaigns as different races and factions, and I can only remember it having been an issue since The Hunter and the Beast patch (1.7), although I cannot say for certain if it is tied to that one or the 1.7.2 balancing-patch. 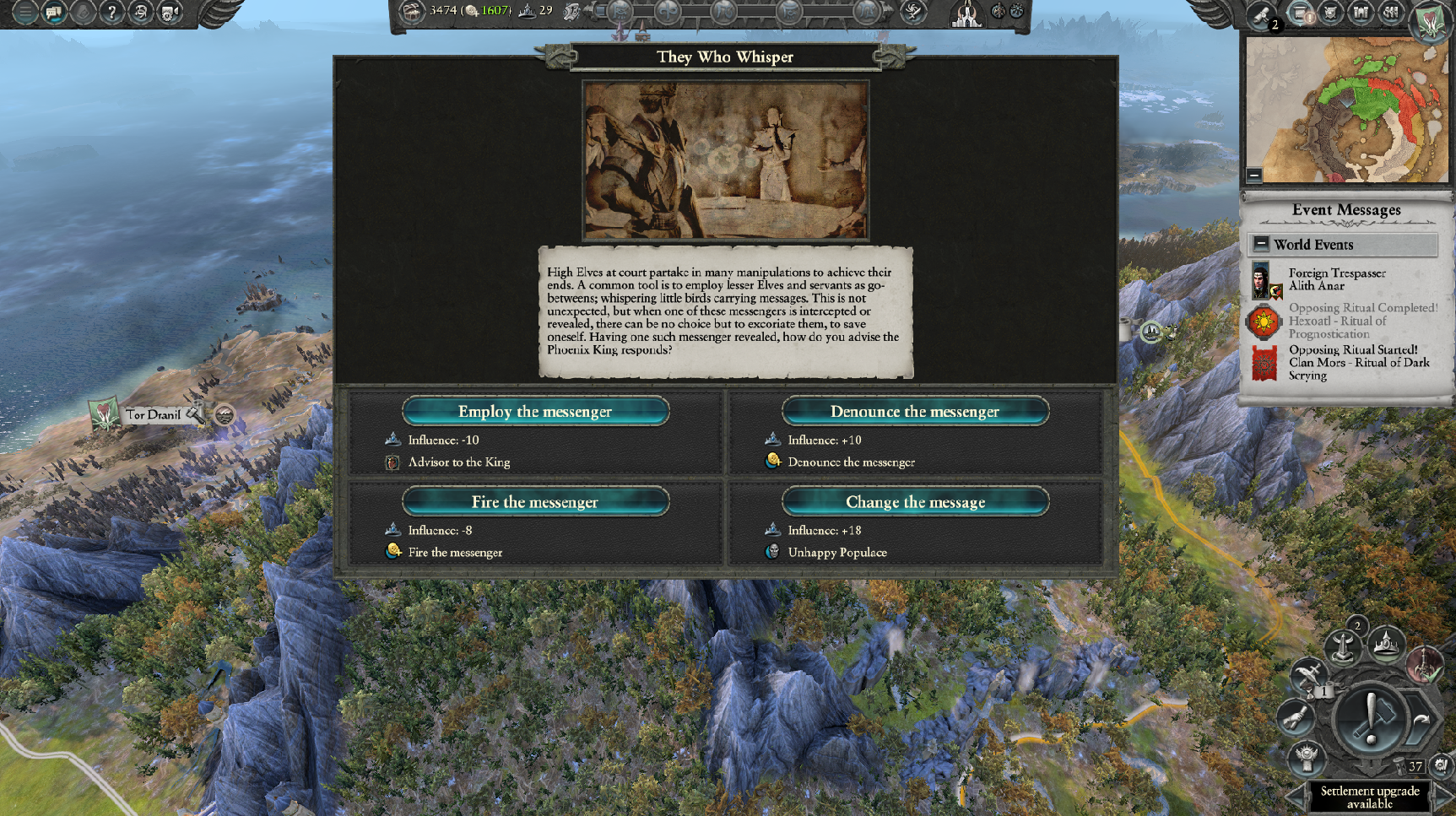 Secondly, the bug with the starting-missions for Avelorn.
In the second screenshot I have the settlement-panel for Avelorn up, along with the mission, Enhance Perfection. The objective of this mission is to construct a Tower (a level 3 settlement-building) and you automatically get it at turn 2 I think. As you can see in Tor Saroir, I have the level 3 Settlement, built since many turns ago, but the mission has not completed.
Not shown in the screenshot is The Shrine of Khaine-settlement, where I have also constructed a Tower but it did not complete the mission either.
I remember this mission not completing since the launch of The Queen & The Crone DLC. It has however been a fair few months since I last played Avelorn so maybe it got fixed at some point but now is broken again? 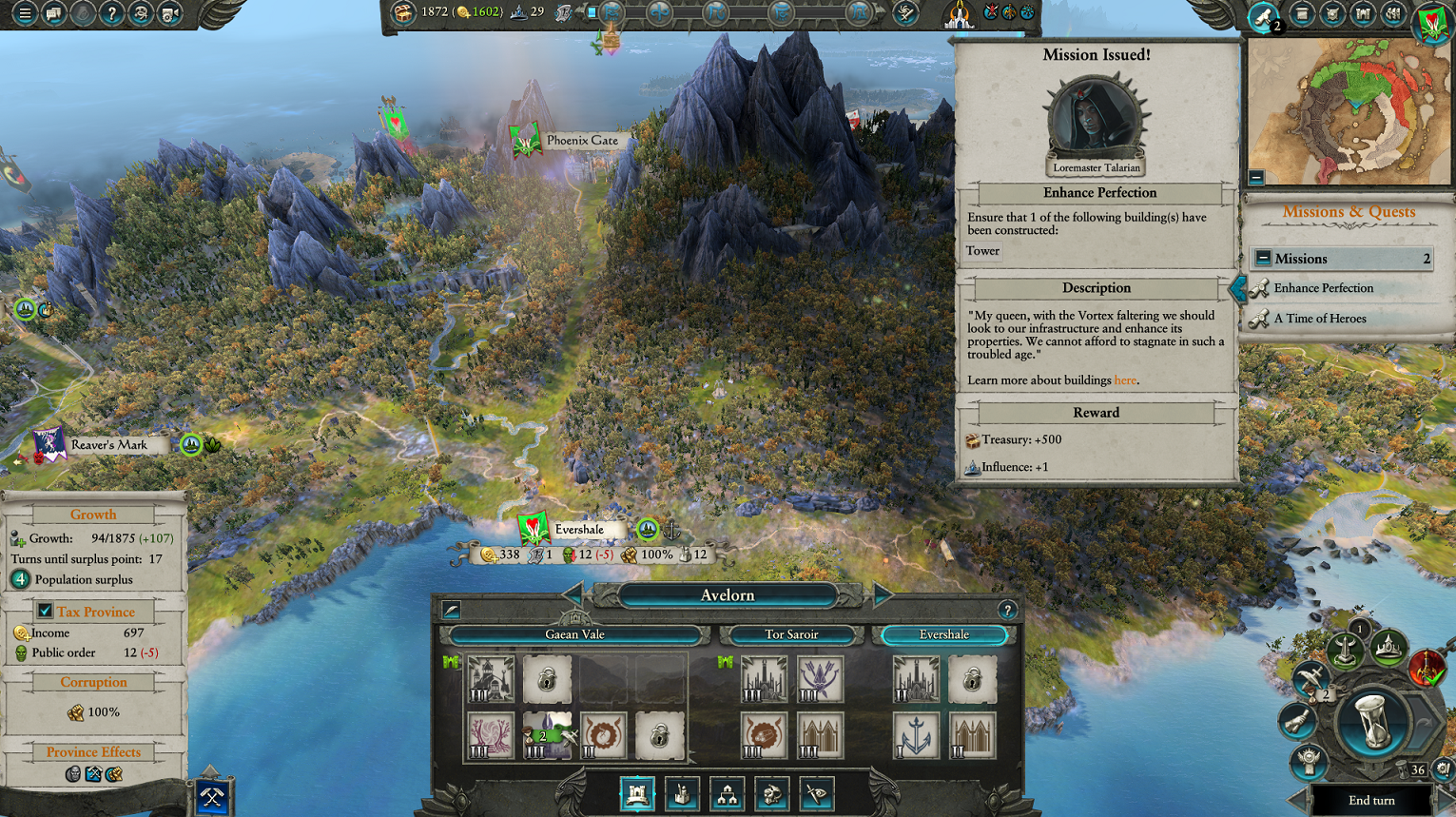 Thirdly
The first mission you get as Avelorn to capture a settlement belonging to the Scourge of Khaine faction, which triggers right after the introductory narration done by Alarielle. This mission did not proc on this campaign I took the screenshots from, and not from another one which I started seperately to test. The mission has always procced when I last played as Avelorn, but that was a long time ago, before patch 1.7 at least. As the other playthroughs I have done lately, these kind of start-missions come up and is completed without any issues.

Hope this information helps, and that it was okay-ishly written. Thanks in advance for looking into this issues