TheWattman Junior MemberRegistered Users Posts: 476
January 2020 in General Discussion
Hello everyone! I previously did a speculation thread about the remaining content for WH2, but I realized along the way that I had made some errors and thinking down the wrong paths. After having re-examined the state of Total War Warhammer, I have come up with a new projection. In this thread I will dicuss what I think will be the ultimate future for all the WH1 and WH2 races, not including Chaos, once all updates and DLCs have been ironed out. I will be focusing mainly on the factions, lords, units and starting positions left to add and not trying to predict any new mechanics, since that is not really my field. I welcome any thoughts you guys might have on that or what other DLCs you have in mind for the remainder of WH2!


The pattern of updates and DLCs over the last 2 years has been 3 updates, accompanied by a DLC, per year. For 2018, that was the Tomb Kings, Alarielle/Hellebron and Vampire Coast DLCs. For 2019, that was Tehenhauin/Ikit Claw, Wulfhart/Nakai and Darkblade/Snikch. Now, according to the Steam Database as of January 2020, there are 2 unknown DLCs lying in wait for WH2. This leaves me to conclude that we're gonna be getting 2 more DLCs for Warhammer 2, probably around April-May and then September and after that will be the grand release of WH3 around Christmas/Festag 2020. So without further adue, here is my take on what those 2 finishing DLCs will be: 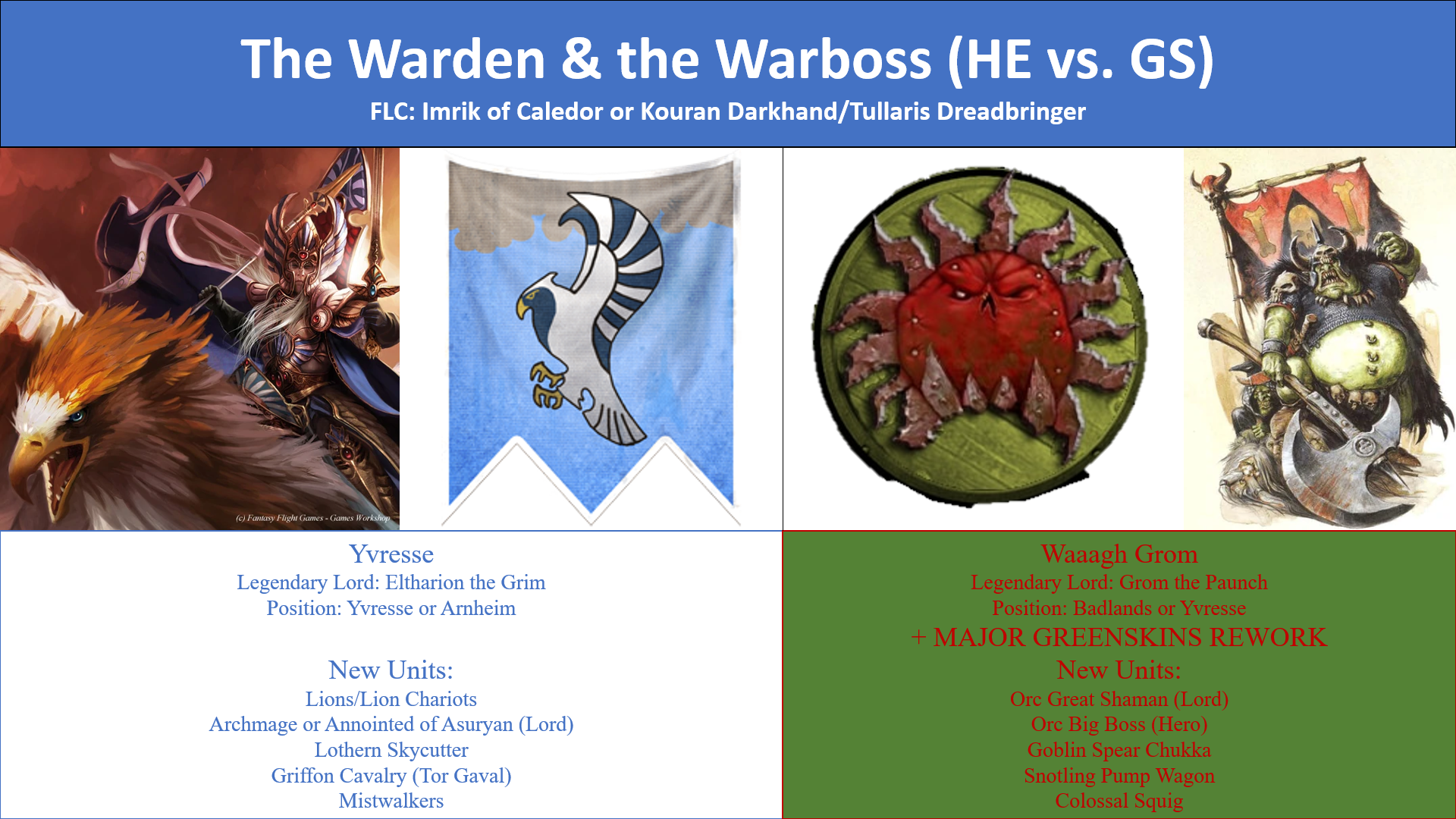 April/May 2020 - Describtion:
The commonly agreed upon DLC. That doesn't mean its gonna be any less awesome. Its the Greenskins update everyone, except me who don't play them lol, has been waiting for. As I said Im not gonna try to predict any new GS mechanics, but I can give you a prediction on the setting. Yvresse is going to get invaded from 3 directions. Grom is gonna start either in the northeastern islands in a direct threat against the capital or in the Badlands to the south. Add to that is the threat from the southwest by Aranessa Saltspite. And from the far west, comes Eltharion himself. Yes, I don't think Eltharion starting in control of all or even parts of Yvresse is going to work very well. Therefore, I have placed him in the High Elf colony of Arnheim in Naggaroth. Your objective as Eltharion will be to secure your immediate surroundings around Arnheim, which will be tough work indeed with Morathi directly to your west. Once she is vanquished, hopefully before she calls upon Malekith to help, must be to race east back to your homelands to save it from pirates and finally Grom. So starting as Eltharion, you are going to have to cut through Morathi and possibly Tretch Craventail, then race across the ocean, either dodging or engaging Count Noctilus along the way, to then break through the Sartosan blockade and finally square off with Grom.

As for the FLC I see two possiblities, either Imrik of Caledor or one of Kouran Darkhand or Tullaris Dreadbringer. For the Dark Elves, I see it mainly as an oppertunity to smash in a 6th lord to complete their roster. I will go further into my reasoning there when I cover the future of the Dark Elves here, but in short, the Dark Elves are very done in their unit roster, there's no more material for DLCs. For Imrik, its mainly because he's a fan-favourite and so we maybe could bring in one or two Caledor-themed units. Then again, Caledor itself is not the greatest of start positions and its not my preferred choice for the 6th HE lord. More on that when I cover the future of the High Elves in more detail. 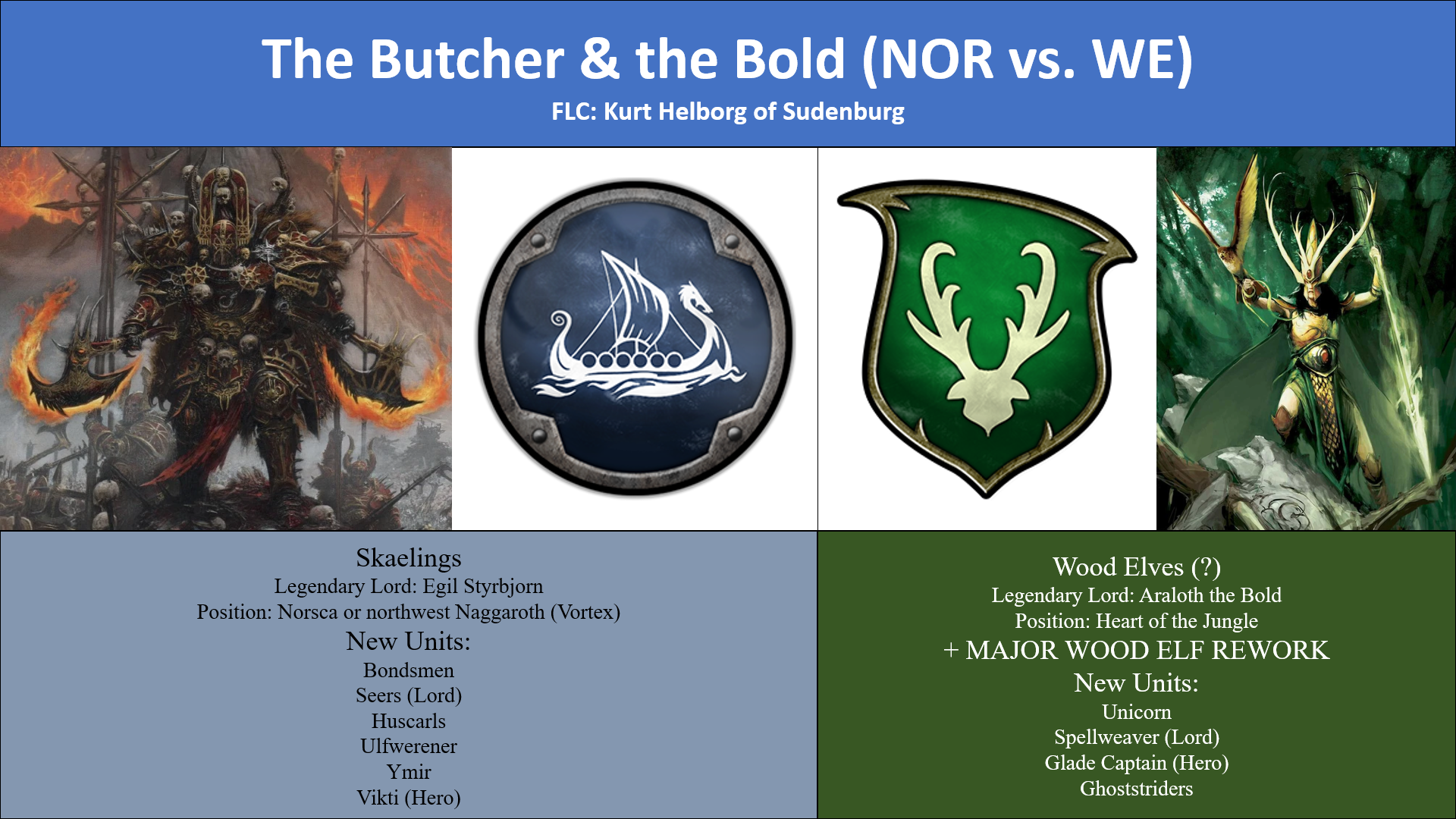 September 2020 - Describtion:
This DLC is far less clear cut than the previous one. My reasoning on this one is basically "to get stuff out of the way before WH3". Consider this: the Greenskins need an update, which will come with the previous DLC. What other races need updates and/or are not a part of WH2 yet? My answer is Wood Elves, Beastmen and to some extent Dwarfs, Empire and Norsca. Now the devs have said that WH3 will be "Total Chaos", so probably a heavy emphasis, as it should, on the various vessels of Chaos. To me, that's a good reason to to hold off on the Beastmen update until WH3, so they can roar into an environment they thrive in. As for the Dwarfs, WH2's vortex is not ideal for any Dwarf start tbh and the missing Dwarf characters have absolutely ZERO connection to the new world, so they will have to sit WH2 out. That leaves Wood Elves, Empire and Norsca. And consider, how well do the Wood Elves fit into the Dark Lands of WH3? Hardly at all, therefore it would be ideal to do their overhaul before WH3 launches.

Coupled with the overhaul, Araloth, Champion of Queen Ariel, will lead the Wood Elves to the Southlands to take over Oreon's Camp. That leaves Norsca and Empire. And here Im thinking that we should get a good prelude to the Chaos of WH3. Because there is no Chaos-alligned faction in WH2, except Morathi, which is old news at this point. So far, its only been Skaven or Untainted factions. Lets bring 1 Chaos faction to bare and let Norsca shine for just a bit. Egil Styrbjorn will lead his Khorne-worshippers to Ulthuan or Naggaroth and even though Khorne hates magic, Norsca needs more lords than just a Chieftain, so give them a Seer. Lastly, Reiksmarshall Kurt Helborg brings in Sudenburg for the Empire. I know Snikch is literally in the next settlement over, but they can easily be moved up to Bel Aliad instead to give just a bit of room to maneuver. Plus give me a better start than this for Empire on Vortex.

What do you think guys, does this sound like a good road map?