SeanJeanquoi Posts: 1,725Registered Users
January 25 edited January 31 in Feedback & Suggestions
While digging through Bretonnian Army Books I came across this mechanic that I think could easily be translated into the Total War Warhammer series.

In the founding of Bretonnia, Gilles le Breton (The Green Knight) and his 13 Grail Knights, fought off the tides of Greenskins, Chaos and the Undead single-handedly and carved the way for the mighty Dukedoms of Bretonnia that we all know today.

Gilles and his companions were each a paragon of a particular virtue and ever since the founding of Bretonnia, aspiring knights have pledged themselves to one virtue, in particular, to honour their founders and give themselves special rules and buffs in combat.

Currently, Virtues are in the game as the names of the generic Lord recruitment traits that every faction has, but this is a waste of what could be a very interesting feature of the faction. Considering they fleshed out Vows early last year, Virtues could be just as easily fleshed out. 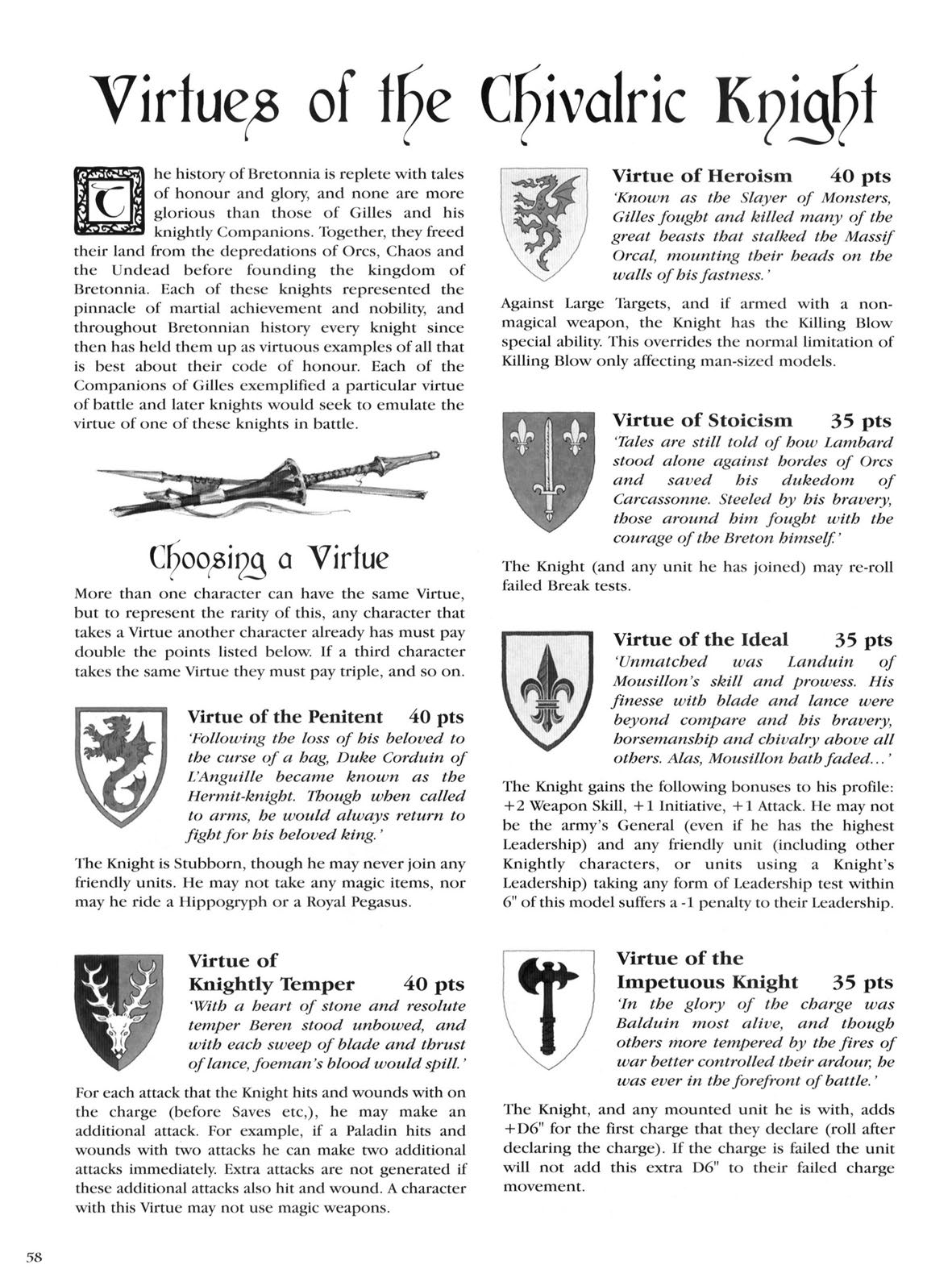 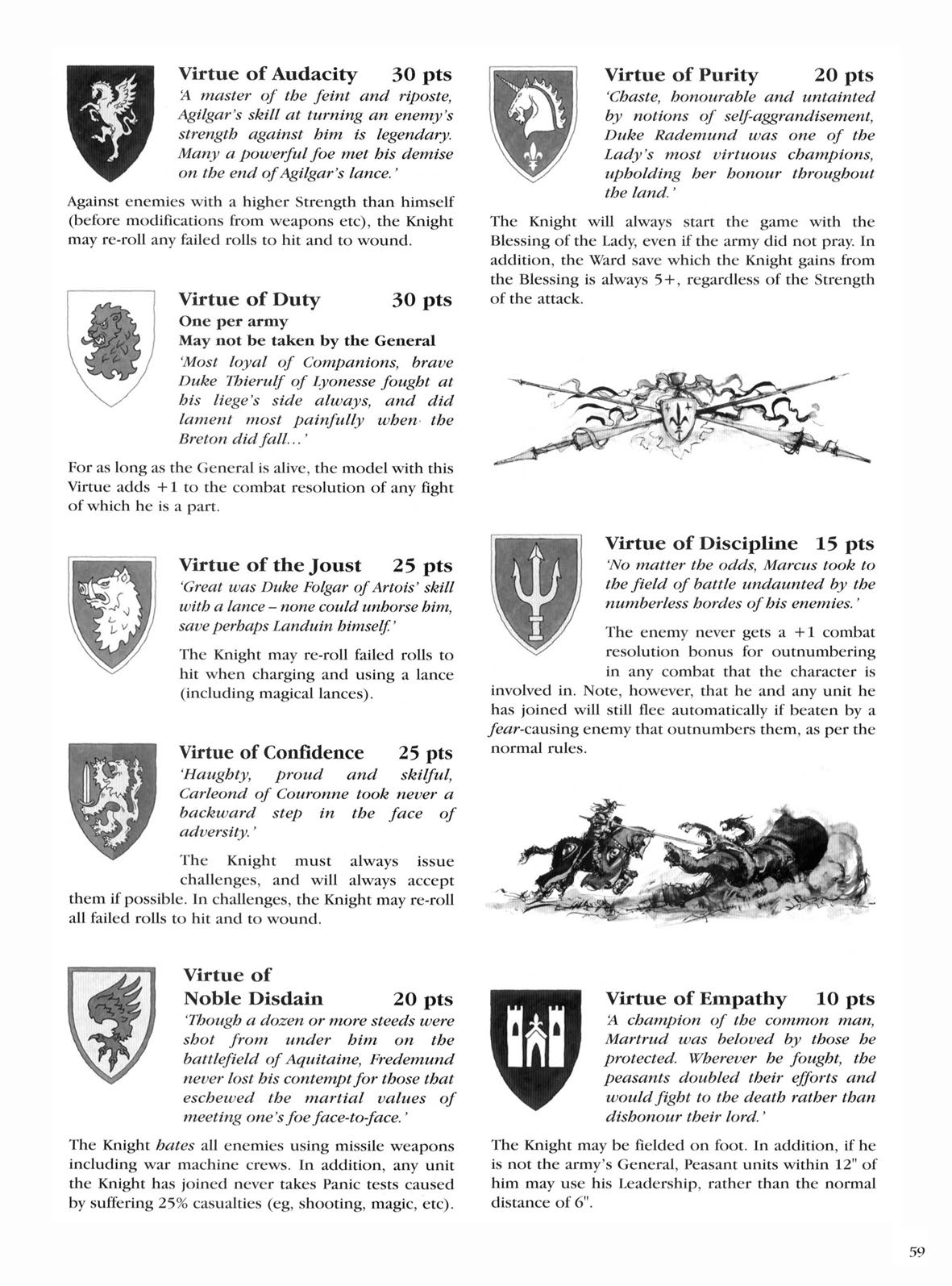 Obviously alot of this cannot be converted 1-to-1 from Tabletop to the Warhammer Trilogy so here's how I'd suggest they could (very easily) convert them to the games framework: 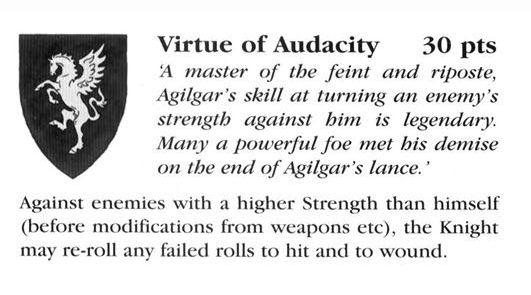 When fighting against stronger foes (when they're losing an engagement) this Lord/Hero gains the "Dodge" and/or "Deflect-shots" abilities (Like Sisters of Slaughter and the Swordmasters of Hoeth), where they can avoid damage. 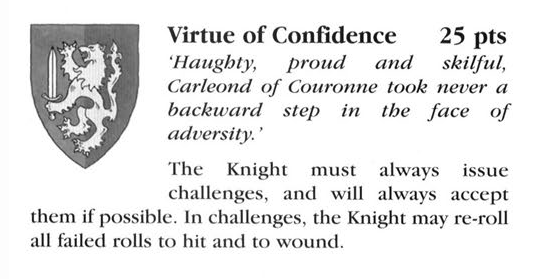 This Lord's army isn't ever allowed to retreat, but in return, the Lord becomes an incredible Lord-killing duellist. 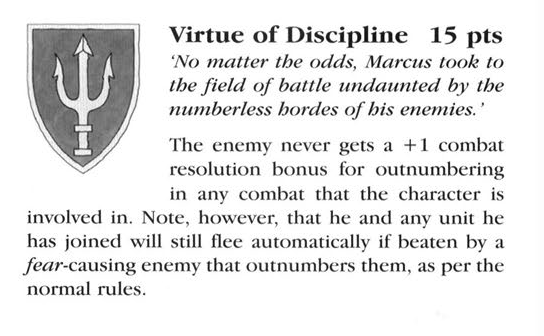 If you are outnumbered and/or the balance bar is stacked against you during battle, your Lord and everyone within their Leadership Aura gains the "Unbreakable" trait (or at least, a massive leadership almost equivalent to Unbreakable).

an interesting spin on this might be to give everyone except your lord unbreakable, so the goal then is to protect them at all costs, otherwise, everything falls apart. I'm undecided on which idea would be better: not giving the Lord the trait doesn't make much sense, since it's his trait, but giving it to him and the units in his area of influence also sounds a bit OP (though Thematic).

if this were to carry over into competitive play, not giving the Lord Unbreakable would add an interesting dynamic, where you have to rush to snipe the Bretonnian Lord if you want to topple the whole force with ease. 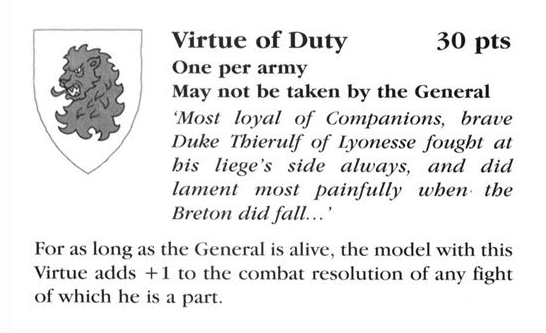 Flat bonus to the Leadership of all the units and characters within this Lords army.

You could also make it so that when this Lord is near multiple friendly units, or a Hero, the Lord gains defensive buffs, as it is the duty of the units to protect their master. 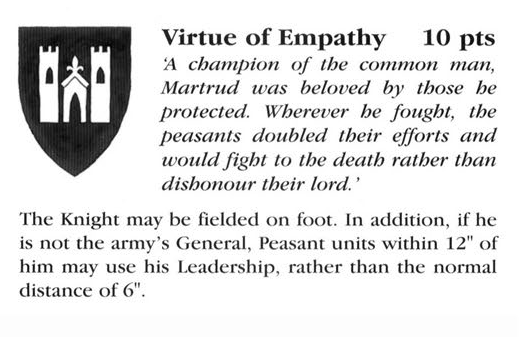 This Lord/Hero gains the ability to buff the stats of nearby friendly peasants. 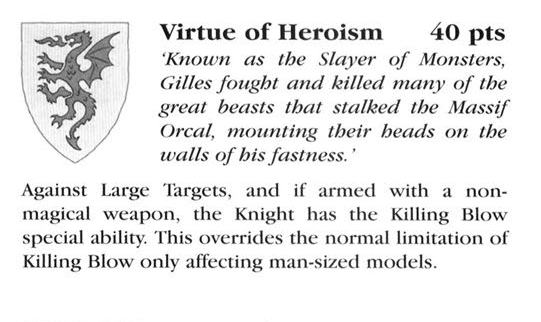 Makes the Lord/Hero into an Anti-Large expert, Like Henri le Massif or Bohemond Beastslayer.

Virtue of the Impetuous Knight: 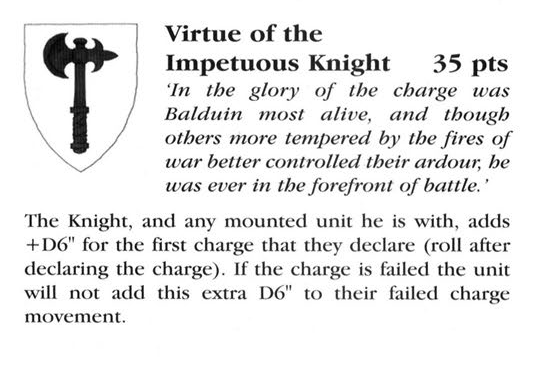 This Lord/Hero gives buffs to themselves and nearby cavalry units on the charge (increased charge bonus and Melee Defence for a few seconds before and after a charge).

Virtue of the Joust:

This lord has "Charge Defence Against All" at all times (even while moving) and gives the same to nearby Cavalry units (so enemy charges are negated when within this characters area of influence).

Virtue of the Knightly Temper: 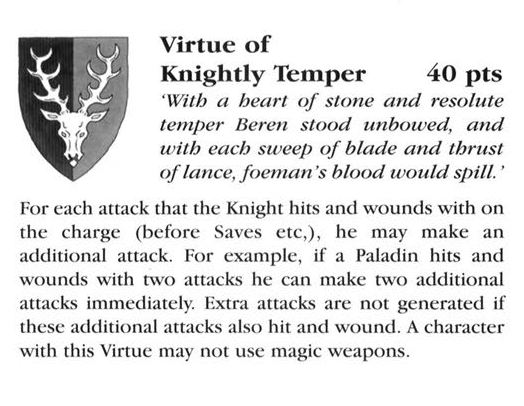 As we saw with Aranessa, Faster attack animations can, unfortunately, break the balance of the game. Therefore, I'd argue that this skill should give the Lord the "Strider" ability, Increase the speed of the whole army by 10-15% and increase the armies campaign movement range by 10%.

Virtue of the Noble Disdain: 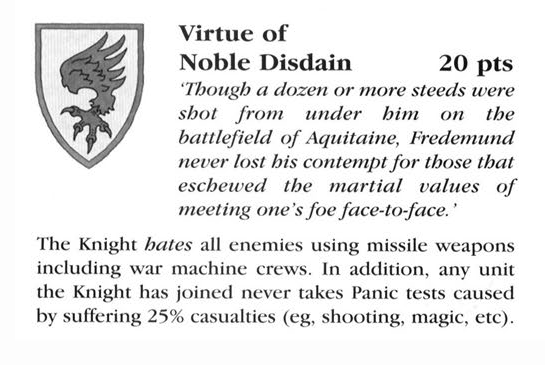 This one was the hardest to translate, but I think it should give +10-20% missile resist for the lord and their army

The part where it says "Units won't route due to 25% casualties" could be translated to "Units can take more casualties before routing/shattering and the Army losses penalty kicks in alot later than usual".

Virtue of the Penitent: 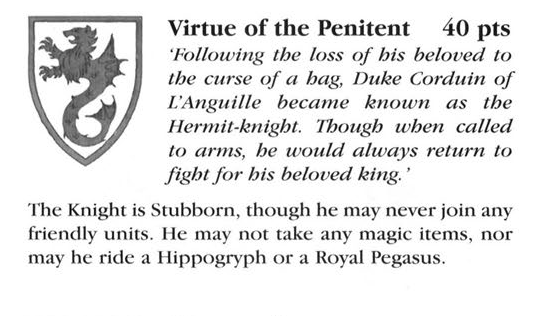 This character becomes a very effective Tanky Foot Lord, at the cost of never being able to use a mount. 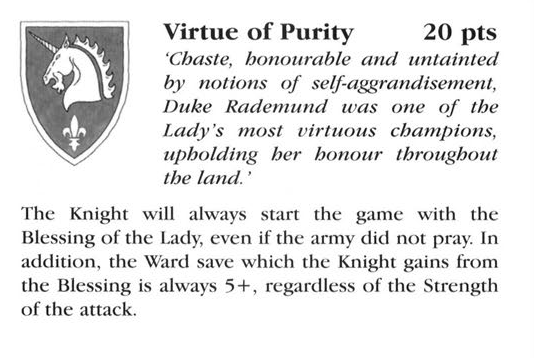 This army has "The Blessing of the Lady" by default. Additionally, the Lord (and possibly the army as well) gains an additional 5-10% Ward Save from the Ladies Blessing). 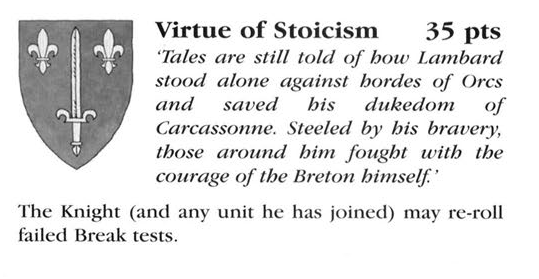 This Lord/Hero gains the "Unbreakable" Trait.

How Virtues could be Implemented

Upon recruiting a Lord, some Virtues (Like Purity and Audacity) could be instantly available to them, while others could be tied directly to the Vows system, requiring you to pursue a particular Vow in order to unlock a specific Virtue for that Lord (Currently there is no incentive to pursue a particular Vow, it's just a question of what one is easiest. Linking Virtues to them in this way could make it a more interesting decision).

Finally, some Virtues could require your lord to reach a certain milestone (Kill x number of enemies, prove their worth in battle by slaying a Legendary character, etc). Once they are locked into a Virtue, it cannot be changed. All in all, this would make the Bretonnian Lords infinitely more customizable and closer to Tabletop.

Why this would be a mechanic worth implementing

1. This would be an optional and unobtrusive mechanic that could allow you to greater personalize your Lords.

2. Virtues could be a good way of fleshing out Vows and making you pursue a particular Vow, where right now you only go for the one that's easiest.

3. There is no real incentive to bring a Foot Lord at the moment, but Virtues such as "Duty" and "Penitent" could change that, making it a far more viable option.

4. Bretonnia's 2 main strengths are their characters and their cavalry. Giving their Lords more customization and niche strengths makes sense for Bretonnia in particular, who are so reliant on their Characters.

5. Bretonnia only has a basic lord option, unlike other factions who have different Lord types for different roles (Master Engineer, Huntsmartial, Grand Master, etc) Even if CA adds other Lord and Hero types, Bretonnia is unlikely to get as much variety and have Lord types that buff different parts of their roster. Virtues would be a great way to supplement that lack of variety with 13 unique roles they can fill.

6. As they are right now (Lord recruitment traits) they don't properly reflect their Tabletop traits, they're alot weaker and you can't reliably get a particular one you want (Since its dependant on the randomly generated lord recruitment pool), so if you want an Anti-Large lord, you're fresh out of luck unless a Lord with "Virtue of Heroism" randomly spawns in your recruitment pool. Fleshing out the mechanic would give more control to the players and make the Lords feel alot more personal and unique as a result.

What say you? Would this mechanic interest you? Do these traits that I've laid out sound reasonable and fun?

I Understand that some might be frustrated considering we don't have this kind of customization for other factions yet, Just know that I'm a strong advocate of other factions like Wood Elves getting their "Kindred" lords, Beastmen getting Marks and mutations, Dwarfs gaining the ability to craft new weapons types for their lords and so on.

As always, let me know your thoughts in the comments