CA's comments on the lopsided quality of LP's

SeanJeanquoi Registered Users Posts: 3,416
April 2020 in General Discussion
Q: The last few DLC's have been very lopsided in terms of quality, one side is way better than the other. Are you aware of this? do you make one faction first or give one priority? and is this something you plan on rectifying with future updates? 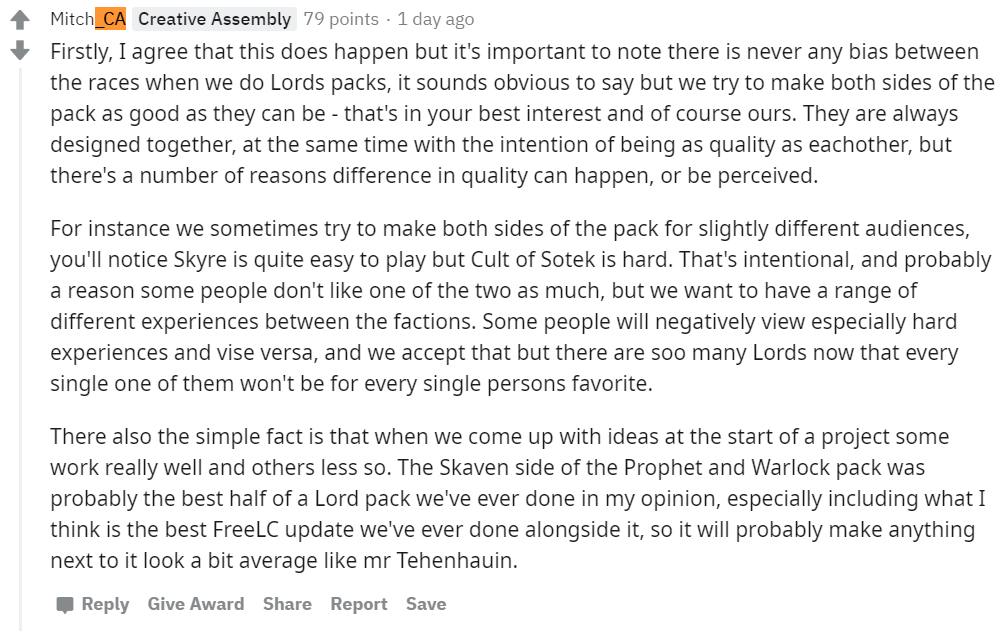 This has been eating away at me ever since I read it and before we discuss this I just wanna say: love the game, love CA, really appreciate their hard work and I hope everyone is staying safe and not overworking themselves during these troubled times.

So its with all the goodwill in the world that I say this response is either untrue or just half the story.

The reason for the Quality difference

It doesn't take a rocket scientist to figure out that CA don't get alot of downtime to experiment with new concepts and game mechanics, they need to do it on the fly...while making DLC. So every new faction they make is obviously them experimenting with new ideas on the fly.

This response from Mitch only drives home the obvious truth that Nakai and many of the other weaker halves of the Lord Packs were an experiment gone wrong. They've been playing around with different campaign mechanics: Nakai's campaign is ridiculously short (experiment) Ikits is ridiculously easy (experiment), Malus has 2 start positions (Experiment), Wilfhart is on an expedition (experiment)

good or bad, this is obviously what's going on and if they strike gold, they go with it, if they don't, they hit the ground running (They literally used Nakai as an excuse to play around with ways to make horde factions better, so this is an example where playtesting was implemented into the content we then bought).

Which leads into my next point.

I genuinely hope he was lying here because if this is what CA believe internally and if this is how they totally justify the quality difference between their Lords then that really frightens me, because its easier for us to call bulls*t on a lie and push for better than it is for us to break through a delusion and make them see the reality.

Nakai's campaign was insanely short. It barely lasts 100 turns and this is because he doesn't really have a quest or larger goal outside of "Kill the hunters and then do the final battle". This seems alot less like 'catering to people who want short campaigns' and more like CA ran out of time and resources for Nakai after going hog wild with Wulfhart and so they couldn't actually develop him anymore.

Similarly, Tehenhauin and Ikit aren't anywhere close to the same level of quality so you cant write it off as "one is easy mode, one is hard mode". The difficulty of Tehenhauin's campaign isn't the issue (in fact, most people dislike Ikit for being too easy rather than Tehenhauin for being too hard) it's the quality difference which is staggering. Ikit would be worth £7 on his own! Tehenhauin is worth £3 at best. That's the level of difference we're talking about.

"We have no bias and develop them at the same time"

This is provably false. Ikit has an entire workshop with unique UI that actually changes how his units look, unique RoR's, nukes and all his units were top-notch, while Tehenhauin had a sacrifice skill tree that simply moves some numbers around to give you x public order or damage and unlocks the basic RoR's you got with his LP.

Markus Wulfhart had 4 unique Legendary Heroes (something CA said in the past was a waste of resources and not something they want to do) an expedition, a few unique units like Gyrocopters for the Empire, a whole new mechanics with the jungle agitation and imperial supplies...meanwhile Nakai was a collection of ideas on how to fix hordes cobbled together and added on the end of Wulfhart.

now, maybe they don't mean to show favouritism but the fact of the matter is that they objectively do in practice. There are always 1 or 2 units that are just kitbashed into existence to save time/money (Razordons for example) and there's always one faction that gets the short end of the stick. CA as yet to produce a LP that was equally balanced aside from the Queen and the Crone but both their campaigns had basically no mechanics to compensate for the good units and everyone is still annoyed by both their models.

This has been eating away at me because its either dishonest or misguided and both are concerning. If the current time/money/staff numbers aren't sufficient to produce an equally balanced Lord Pack then they should raise the price, delay the packs or add more staff to their teams because, regardless of the cause, this is becoming a serious problem.

They're only creating more work for themselves that they'll have to clean up later, in future updates.