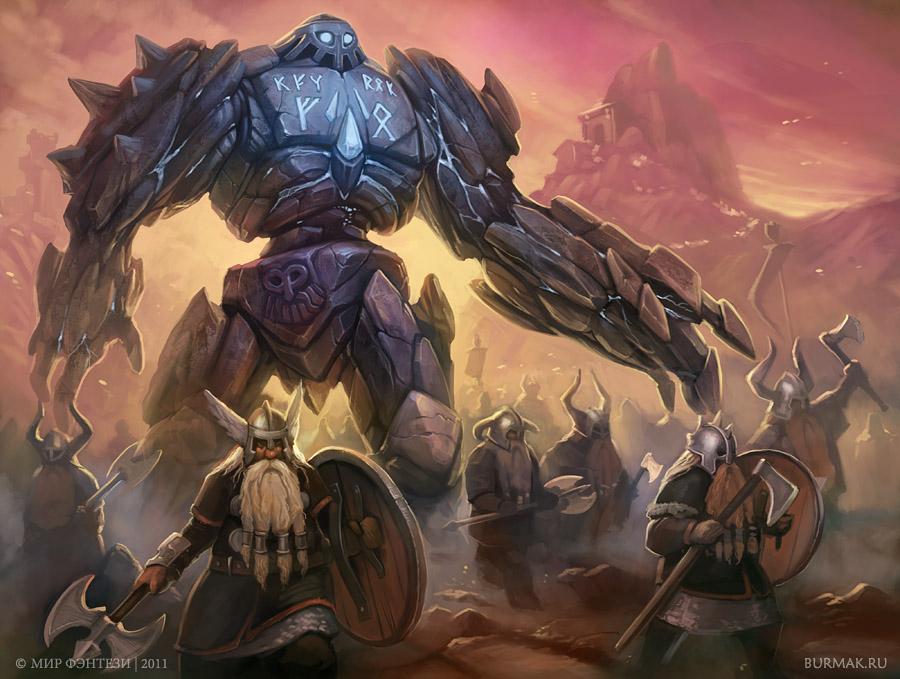 "Behind the thick infantry formations, he heard the slow tread of the gronti-duraz. Through the dense earth he could feel the tremor of their footfalls as the low, sombre chanting of their masters animated them. Thurgin was glad to have the stone-clad behemoths at his back." pp. 13 'The great betrayal'

"Behind the stout phalanxes of dwarf warriors leading the attack, Snorri saw giants. Creations of stone and metal, these ancient golems were slow to rise and quick to slumber. Only the most powerful runelords could rouse them. Like the anvils, they were magical machineries fashioned by the supreme artifice of rune masters. The craft to forge them anew was lost, but the gronti-duraz lived still. It meant 'enduring giant' in the dwarf tongue." pp. 24 'The great betrayal'

In lore Karaz Ankor has several of these locked up in the vaults, considered too precious to activate and use due to the loss of knowledge on how to make more. With Greenskins getting buffs, especially in terms of monstrous infantry and monsters I believe dwarfs also deserve at least a single unit to help anchor the lines or deal with annoying monsters in a pinch. Perhaps with a quest akin to one for awakening Lord Kroak that would allow us to re-invent the mistery of Golem creation.
Post edited by CA_Will#2514 on August 2022
Tagged:
Flag 1 · Disagree 1Agree