TheWattman Junior MemberRegistered Users Posts: 237
May 16 in General Discussion
The Dark Elves are near enough to completion as of now in WH2. There is nothing further from them that warrants another DLC, as all that is missing is a Black Ark Fleetmaster Lord. Not enough. However, one final addition still remains, their 6th and final lord. The Lizardmen and High Elves both now have 6 Lords each, while the other game 2 base factions, Dark Elves and Skaven, have 5. The Skaven seem to be strongly hinted for the DLC coming some time later this year, meaning 6 for them too. That leaves the Dark Elves in the spot for a last 6th lord in form of an FLC.

In my mind, the most suitable candidate is Tullaris Dreadbringer, the Chosen of Khaine. There are other names on the table, like Rakarth, Shadowblade and Kouran Darkhand, but I don't feel like them will add much in their own right. Kouran is a loyalist to Malekith best served as a hero, Shadowblade likewise to Hellebron and Rakarth I'd say lost his chance to Malus. But with Tullaris, we have an oppertunity to build upon the DEF narrative and implement a new mechanic in the style of Imrik's story-driven campaign. An extension of the already existing loyalty mechanic, Im proposing that Tullaris comes with a new system that could reshape DEF rivalries and bring them to a head. 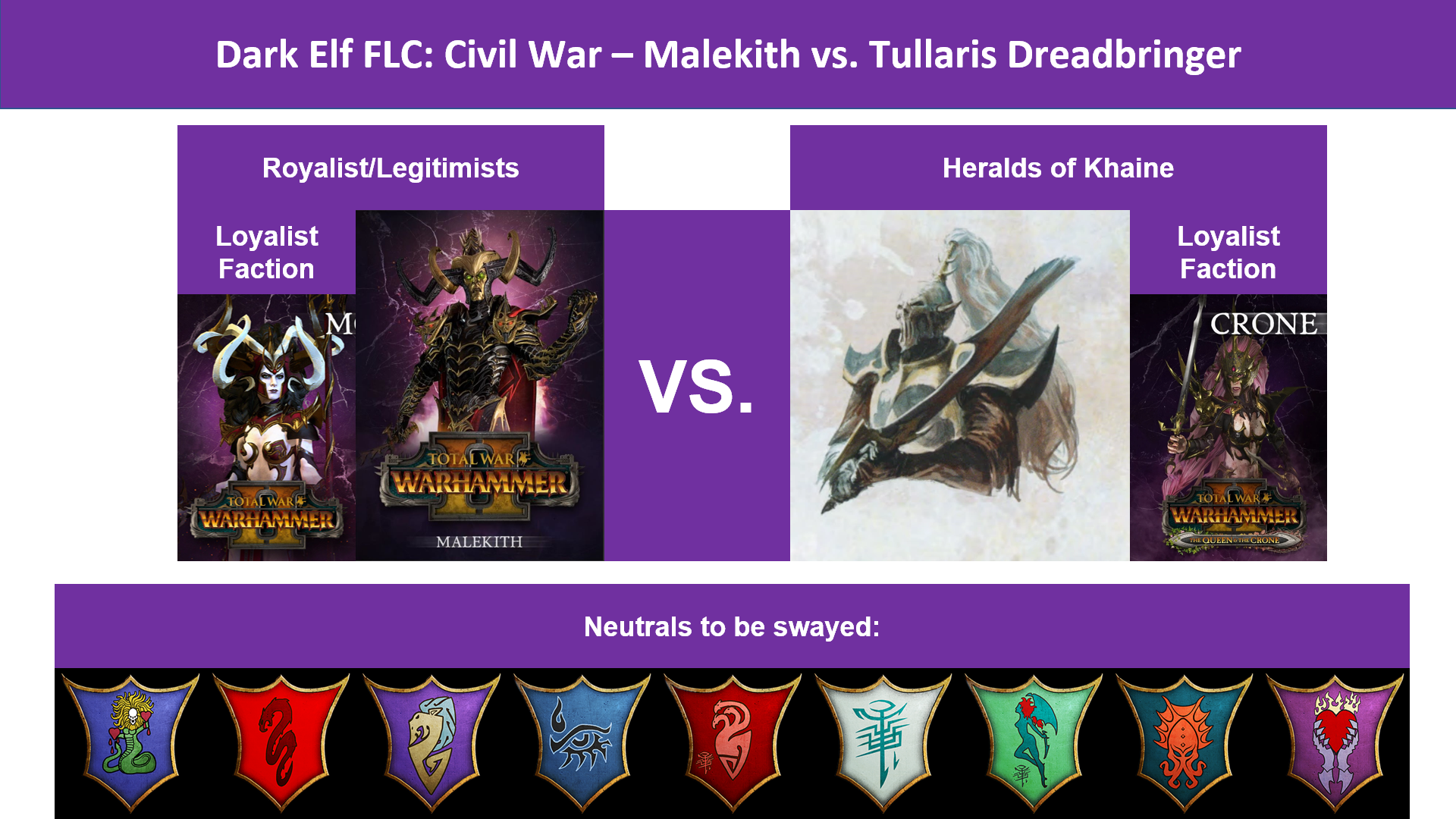 A section out of Tullaris Dreadbringer's lore:
"Unlike Malekith, who claims to be Khaine's mortal avatar purely for the accompanying political advantage, Tullaris is the Lord of Murder's true herald. His dreams and waking hours alike are filled by violent whispers that urge him on to ever great acts of slaughter. Little by little, the Witch King has become aware of this unfortunate state of affairs, and knows that a reckoning between himself and the god-touched warrior will one day be necessary. Thus far, Malekith has stayed his hand only out of uncertainty over which of them most rely on Khaine's blessing. Meanwhile, Tullaris has made no attempt to challenge the pretender, simply because the Lord of Murder has not yet commanded him to do so."

What if that challenge was made real in WH2?
Tullaris will start in the Blood Hall in western Lustria and he leads a faction called "The Heralds of Khaine" or something like that. He should also start with all DEF factions discovered in order for this mechanic to work. Other than his own faction on the map, he also leads a faction in DEF society that wishes to overthrow Malekith in favour of the Chosen of Khaine. On the other side is Malekith, naturally. Now both sides have a main faction and also a loyalist faction that supports their respective sides no matter what happens. They are Malekith's mother Morathi and Hellebron for Tullaris, which makes only makes more sense in the rivalry of those two Hag Queens themselves. So the overall structure of the Civil War is already pre-determined, but its outcome still hangs in the balance.

Before the Civil War can be launched, the remaining DEF factions must choose a side, which is where most of this FLC will be concentrated around. This can be handled in a number of different ways. One way could be through regular diplomacy, where a specific number in positive, or negative, relations with Tullaris will cause the various factions to declare a side. For example, reach 200 relations with Lokhir Felhart and he will declare his support for you. If you instead reach -100 or so, he will declare for Malekith. Another way can be through missions for each DEF faction, missions that shouldn't be that easy to complete and they would also be timed once you've accepted them. As for Tullaris's own local campaign you'll likely be in control of western Lustria at this point, having conquered the Savage Orcs, Teclis, Nakai and prepared to move against Mazdamundi in order to reach Naggaroth.

And then the Civil War launches. The beginning stages will look rather similar each time, due to faction positioning. It will be the first task of each side to conquer the loyalist faction, as Tullaris will be closest to Morathi and Malekith is so close to Hellebron. For Tullaris this fight will be especially urgent, as Hellebron could be quite isolated and cornered depending on the alliance structures, so he will have to take out Morathi himself and do it quickly. After that it will all depend on the alliance structures of how long the fight will be. In a worst-case scenario, Tullaris will have to fight all of Naggaroth using only his own resources, if Hellebron is defeated before help can arrive. A fight worthy of the true Herald of Khaine indeed! The ultimate prize will be the control of all of Naggaroth and further, the fight to claim the Widowmaker, to then be used to bring the rest of the feeble world to its knees!
What do you think of this idea guys? Do you see it working in WH2 and would you be interested in it?
Tagged:
Flag 7 · 7Like