The Dwarf and the Rework

considering Empire and as well as the Greenskins now did finally get their reworks, I decided to look at another race and today I want to talk about Dwarfs. Not Beastmen, not Warriors of Chaos, not Wood Elves, who all need a rework more and are less important to me but Dwarfs. Rather on their increasingly poor state that comes from a mixture of a very good position when they started and that they were able to keep it during the entire circle of WH1 and a rather small, some would say insignificant, update in WH2. Because of this their mechanics are not what they could or should be and they miss easy to-do stuff like Shieldbearers and Oathstones as mount options. Lets also not forget the problems with the skill trees from Legendary Lords.
Anyway, a few ideas below:

Mechanics
Normally I like to start with Lords and that stuff but this time, I will start with the mechanic. Reason is that this point affects everything that comes below.
Now, my idea on how to change the mechanics of the Dwarfs is not to completely rework either the Book of Grudges or the Forge but rather enhance it on how it works. To be specific, I will only talk abut the Forge since I do not really see a need for change for the Book. Also, I will NOT create a copy-paste of the Scrap mechanic, no matter how much it would fit.

As of now, the Forge is nothing but a copy-paste of the Mortuary Cult and I dare say it is even a worse version since you cannot get special units out of it. Now, I will not propose to add units to the forge, rather to enhance the Forge in the way it works now and to bring the Magic Runes into it. Basically, almost all magic runes the dwarfs have can now be created by using the forge but they will NOT replace the items or need different “ingredients” to be crafted, still Oathgold and Resources. No, the runes will be added to the options of the Forge. On top of the that, all items the Dwarfs have, not only the ones they can forge, will now have Rune Slots. The number of slots will increase with increasing rarity of the item itself.

The Runes themselves would also be grouped as above, from Common to Legendary and only the runes with a name in them like Master Rune of Alaric the Mad would be unique and could only be crafted once and they would need as many free slots as their group has. So, a common rune needs only 1 free slot where a legendary rune would need 4 free slots for example.
Now you may have noticed that I wrote “almost all magic runes”. I avoided to simply write all magic runes because of Rune Lords and Runesmiths. To be specific, I am talking about runes in their skill trees that have active affects. Like Rune of Wrath and Ruin for example. These runes would be excluded from being part of the Forge and would remain unique to the Rune Lords or Runesmiths. The other runes, the ones who increase their stats but are treated like followers or banners and take 1 turn to activate their effect, will be changed to a simple stat increase like it would be the case for a skill from a yellow line for melee heroes.
To go back to the point of creating runes through the Forge, you do not need to combine them with items, since these combinations would be permanent, that may be preferable in some cases but you can and you can give them also to a character and in this case they would be handled like they are now, as a item that can be equipped or given to a unit.


Oh and here a list of runes from 8th edition armybook. 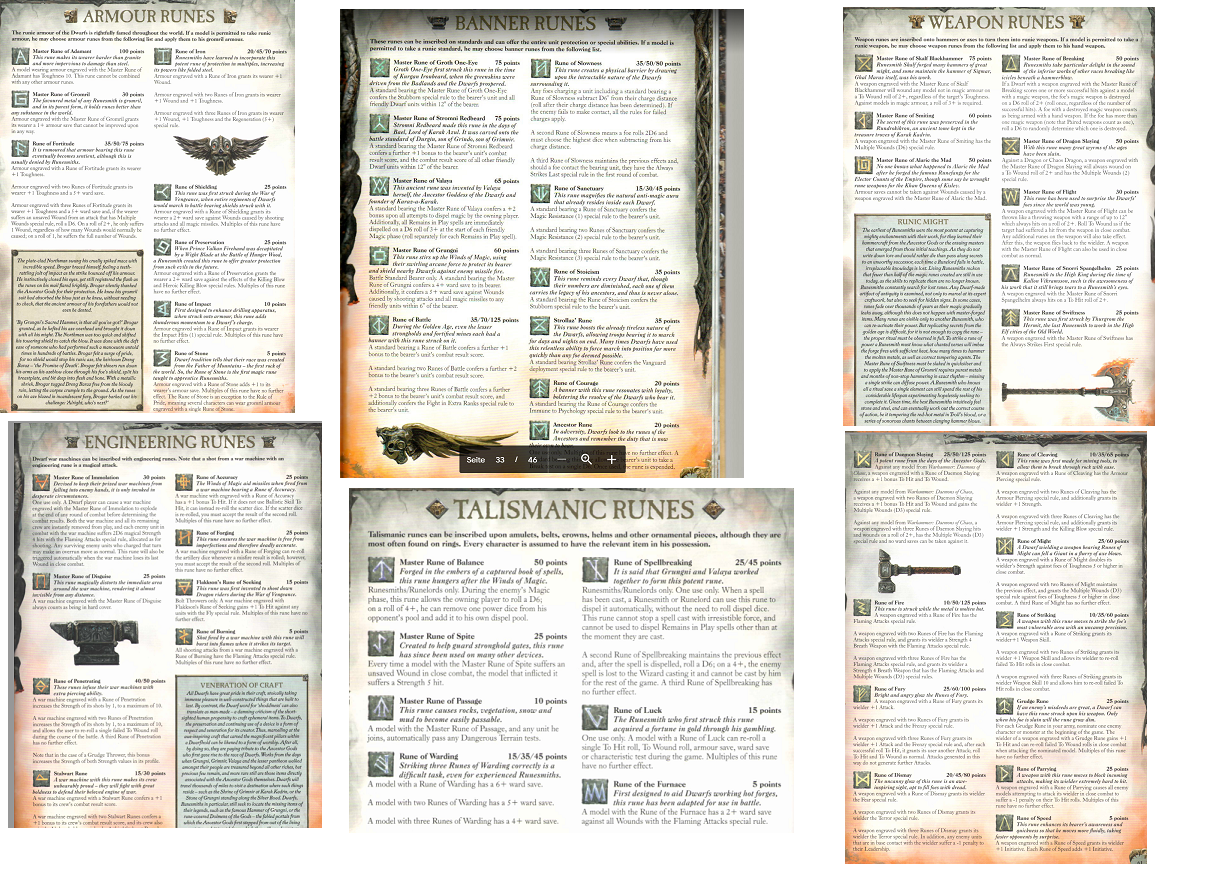 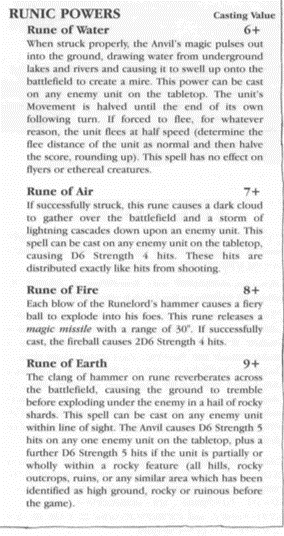 Taken from 6th armybook.
Four unique runes that would result in four bound spells for the Anvil. Some tweaks and changes in the visuals may be needed but otherwise, it should work.
Rune of Water: I go with Krakens Pull from Lore of the Deep
Rune of Air: Urannons Thunderbolt for this one
Rune of Fire: A simple Fireball
Rune of Earth: That one was a bit tricky but I think something like The Dwellers Below would work.


Legendary Lords
One cannot do a rework of the Dwarfs without looking at their Legendary Lords. As of now, all 4 Legendary Lords of the Dwarfs are melee focused and, with the exception of Ungrimm Ironfist, do not really have skills and specialisations that would diverse from their general playstyle. Now, I will go and say that Ungrimm can stay as he is. Nothing to be done there.
For Grombrindal he can almost remain as he is. I would only add a skill that grants him Unbreakable. Maybe even a bonus on Melee Attack for him and his entire army. This may not be much but the White Dwarf has a very good blue line skill tree so there is not much needed in my opinion.
That leaves Thorgrimm and Belegar Ironhammer and these two need a deeper rework and a mount for the latter one would not hurt either. To get more into details, first a little picture:

Lets start with Thorgrimm there. The upper line of skills is his current skills and the line below are my changes to it. I know that his skill tree is bigger but all the other stuff remains unchanged. As you can see, this goes also for some of the skills I wrote down. “Fire Support” and “Advanced Forging” are good as they are now in my opinion. Only some numbers could be increased here and there and “Ancient Bloodline” remains as it is. Pretty much the only thing Thorgrimm is lacking are skills to further boost his preferred units, Hammers and Longbeards, since he is not giving them much of a boost at all.
As far as Belegar is concerned I decided to got for two lines of skills with three skills each. The left one is for Belegar himself and will only boost himself. The right one is for units known to fight underway. After all, Belegar himself is a big underway player so him buffing Miners, Irondreaks and Ironbreakers seemed only natural to me.

Lords
The two generic lords of the dwarfs are not bad as of now. What they mostly lack are some more skills and as far as the Lord goes, mount options. The Runelord has the Anvil of Doom, which I talked about above but is also lacking some more skills.

“Relics from the Ancestors” was added to give the Lord some more versatility compared to the Runelord. Runelord would still have his Anvil of Doom with four bound abilities tough but now the normal Dwarf lord could have some nice upgrades too.

Heroes
More then the other two heroes, the Thane needs some boost. The Dwarf Engineer is still very good, despite the competition of his Vampire Coast counterpart and the Runesmith, well, is practically a smaller version of the Runelord without Anvil of Doom.

“Runic Weapon” exist for pretty much the same reason as does “Relics from the Ancestors” for the Dwarf Lord. Compared to the Runesmith or the Master Engineer, the Thane is simply lacking something. I mean, it also a good idea to give them their mount option of course but I am not sure if that is really enough.


Tech Tree
He is massive and still one of the best tech trees despite being one of the first ones. Also, he is the only one who remains completely unchanged as of today. Normally, I would be totally fine with this tech tree and not speak about it at all.
The thing is though, CA seems to have developed a habit for adding unique lords via tech tree. Tomb Kings have them, Vampire Coast have them and Greenskins have them too. Empire for some reason not though and Vampire got their Bloodline Lords but I think Joseph Bugmann and Grimm Burlokson would fill that place very good. Now, I think that the tech tree of the dwarfs needs much less of a rework but more of a rearranging. Doing something like thematic groups for example. I mean, it is not really funny if you play Ungrimm and cannot buff your Slayers with their techs because you have to get through multiple other techs first. If I remember right the first tech for Slayer comes around turn 60 to 70.
One or two techs could also be deleted. Oathstones for example are a tech and not a mount option as they should be.


Next LP with Dwarfs

For the last part, my prediction for the next LP with Dwarfs. I go for the following and I also say that it will not come before WH3. Frankly, I do not even want them before WH3 if that means more LP for WH2. It is time to move to WH3, ****. 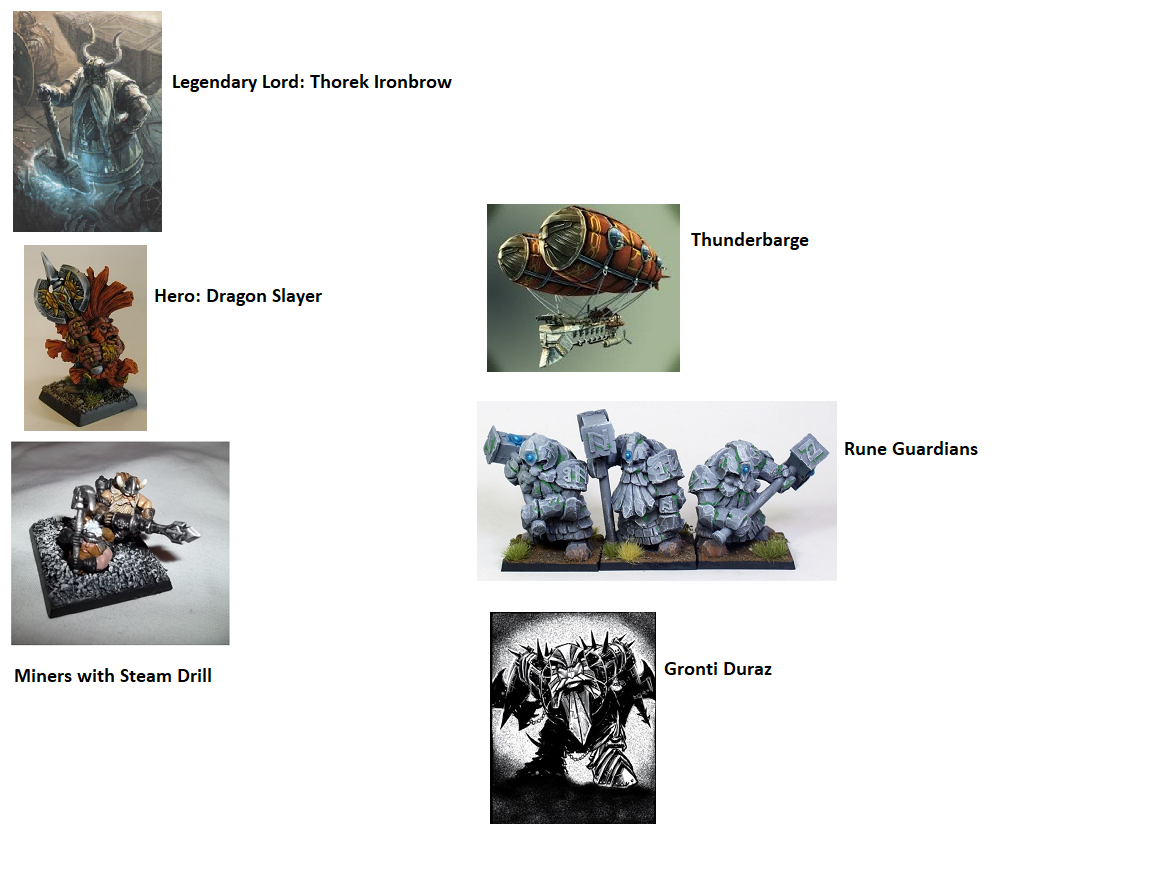 Thorek Ironbrow decides to go east in the search of lost knowledge.

Thorek Ironbrow will be the Legendary Lord of choice because he is the last remaining lord option with name from 8th armybook. That alone makes it pretty obvious to me that he will be the one we will get.

I do not think CA will add Demon Slayer Lords but I do think we might get Dragon Slayer heroes. Depending if CA can make Dragon Slayer heroes unique on the battlefield as well as the campaign map. I know some people do not care about that but CA may think otherwise.

As for the units, I put them in because I like them but also because I think that CA could use already existing assets. I mean, Skaven already have their version of the Steam Drill and if the Gronti Duraz uses some movements or whatever from the Rogue Idol that would be totally fine too.