The Prince and the Knight

saweendra#3399 Registered Users Posts: 19,609
November 2020 in General Discussion
Story of this rivalry for dlc purpose written by yours truly

The Lady of the Lake has managed to create her own realm known as the court beneath but unfortunately its far too weak and too small to achieve her goals, so in a display of ingenuity not seen in the world that was she has decided to create her own network of way stones that will slowly drain winds of magic stealthy and remove the elements of madness in them.

while this little endeavor has seem to go unnoticed by the big wigs in the ruinous powers , it has not gone unnoticed by the prince of madness Moonclaw him self , he feel the madness in air being purified and this sicken him to the core. And such he will come and spread his gift from his mother and taint what ever this is and hopefully start bring about age of MADNESS.

why these two races they are common enemies of each other and both races desperately want dlc to stay afloat.


Beast men side of Lp 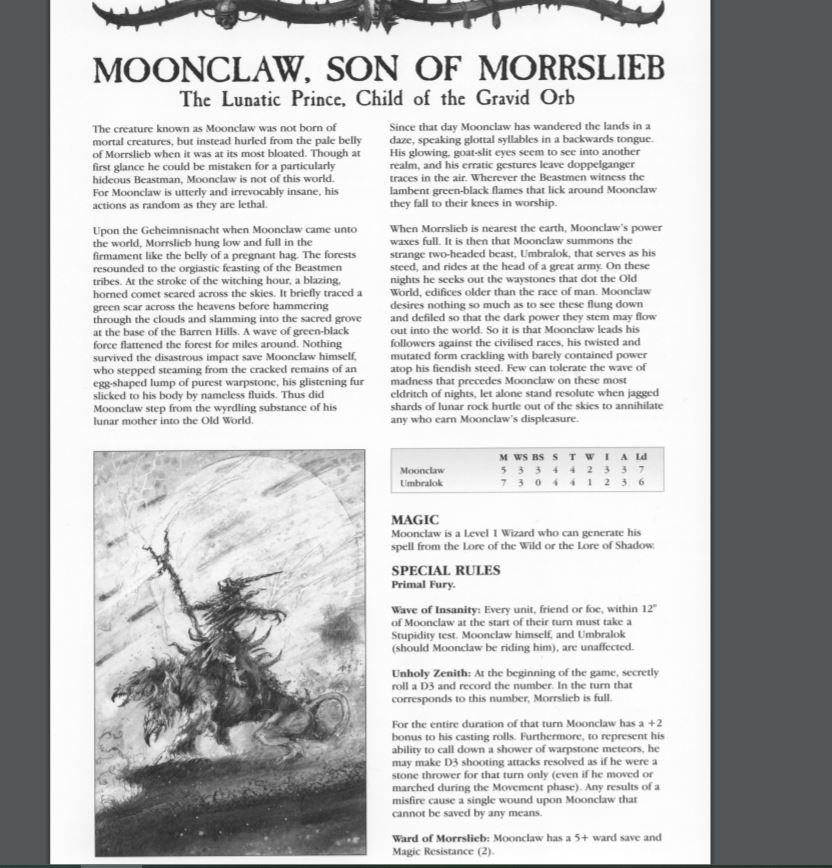 drawn to insanity and power of moon claw Ghorros has become ally of Moonclaw and the prince welcome him since leading armies such task require at least a shred of sanity but the prince has never had such a thing. 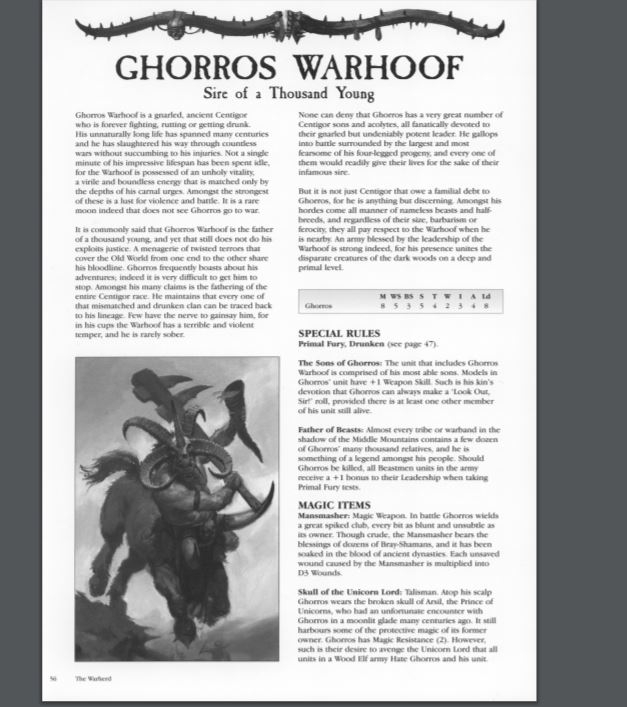 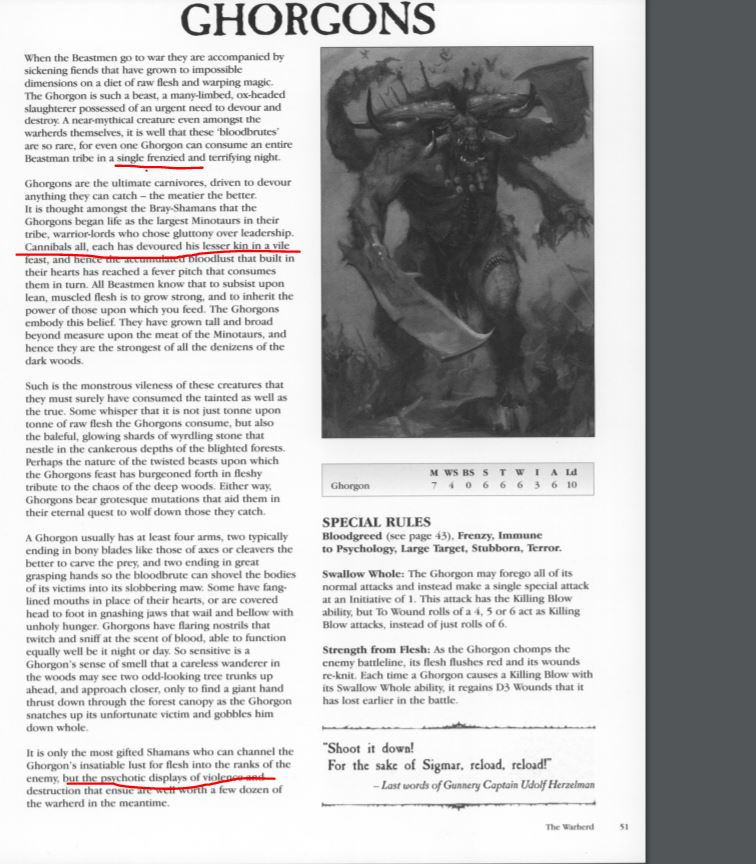 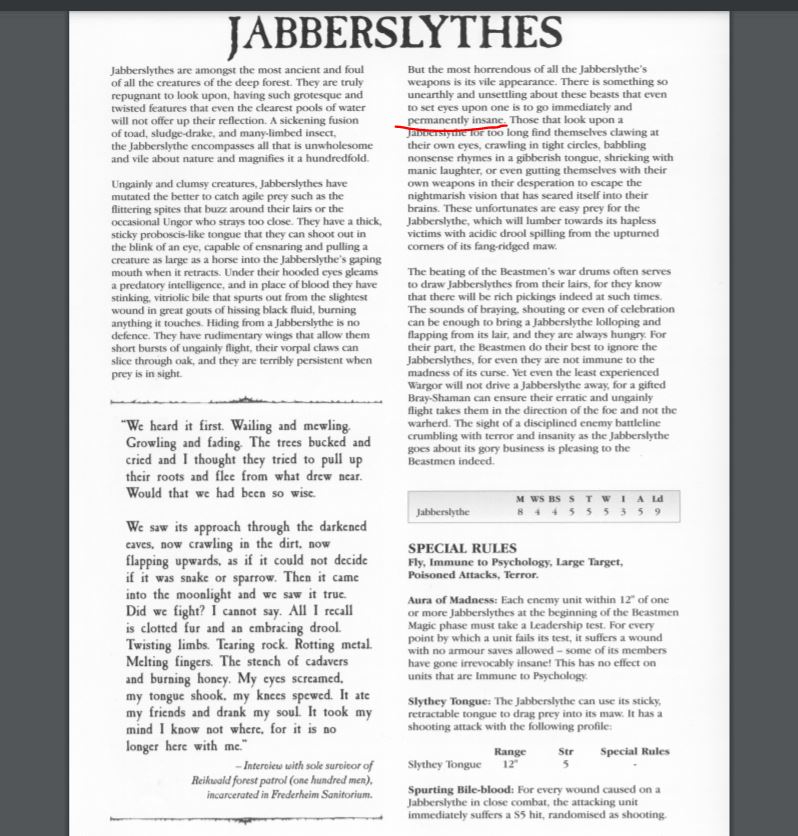 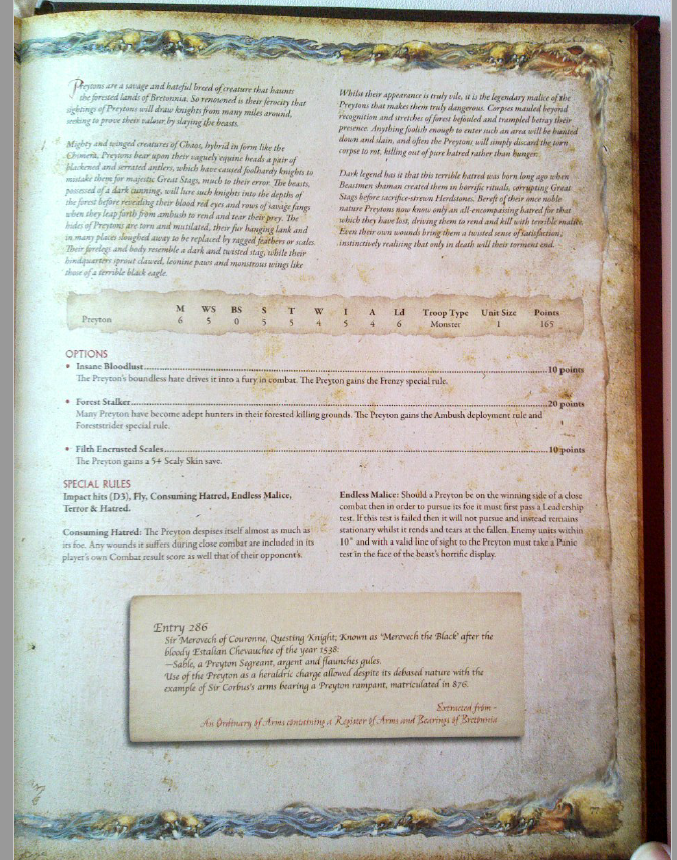 now for the fourth spot,

at the very least using foresaken and morgur skeletons without armour of course, they should have hunger

Why though because BM biggest issue is they run out of steam in battles , so giving them a defensive unit is good, but i do not like god marks because lets face the big gods do not care so let the madness in. 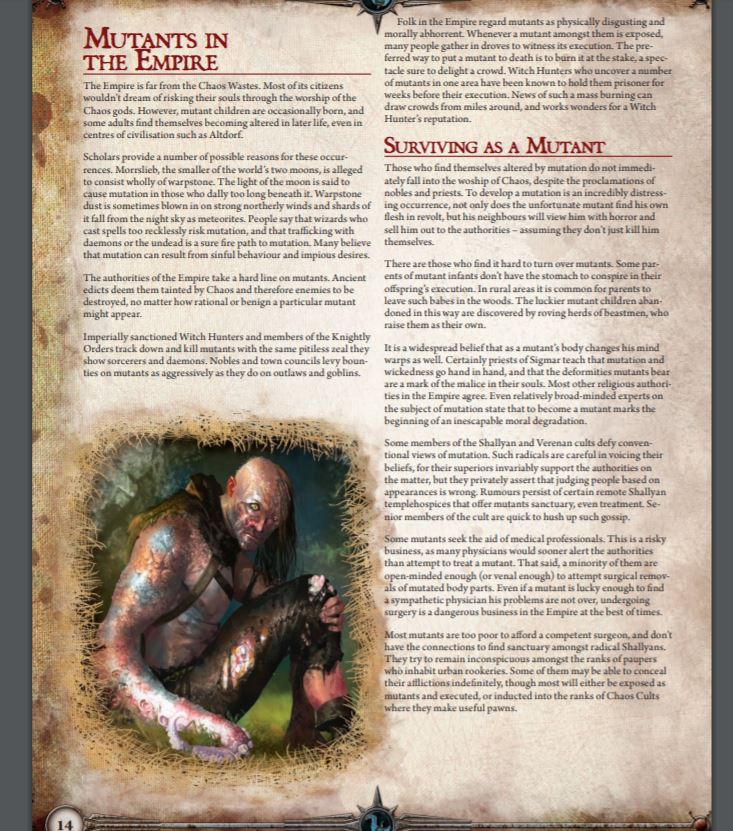 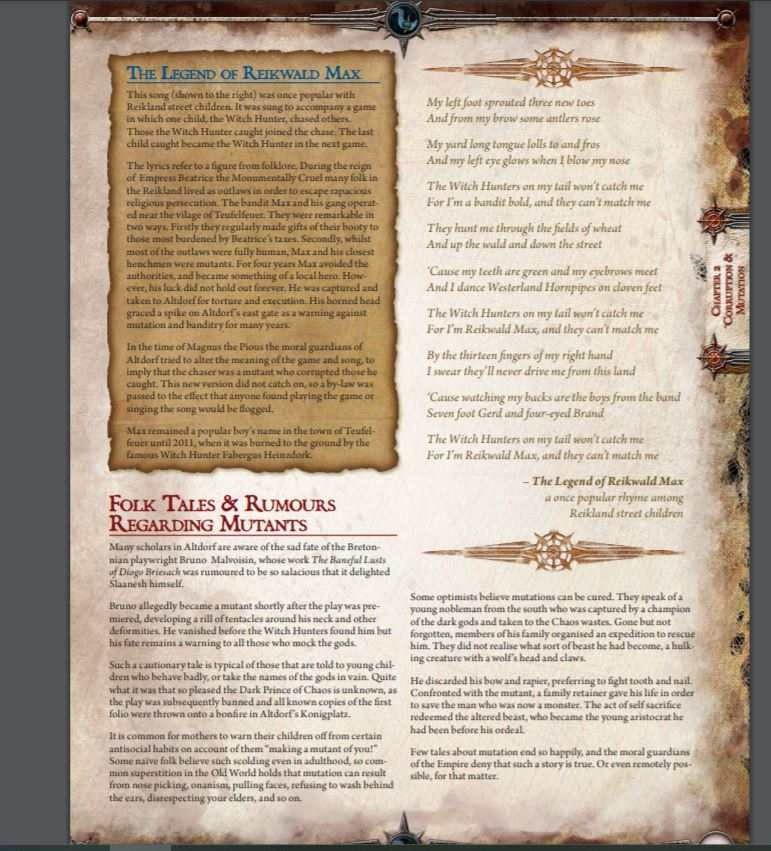 and they do join beatmen 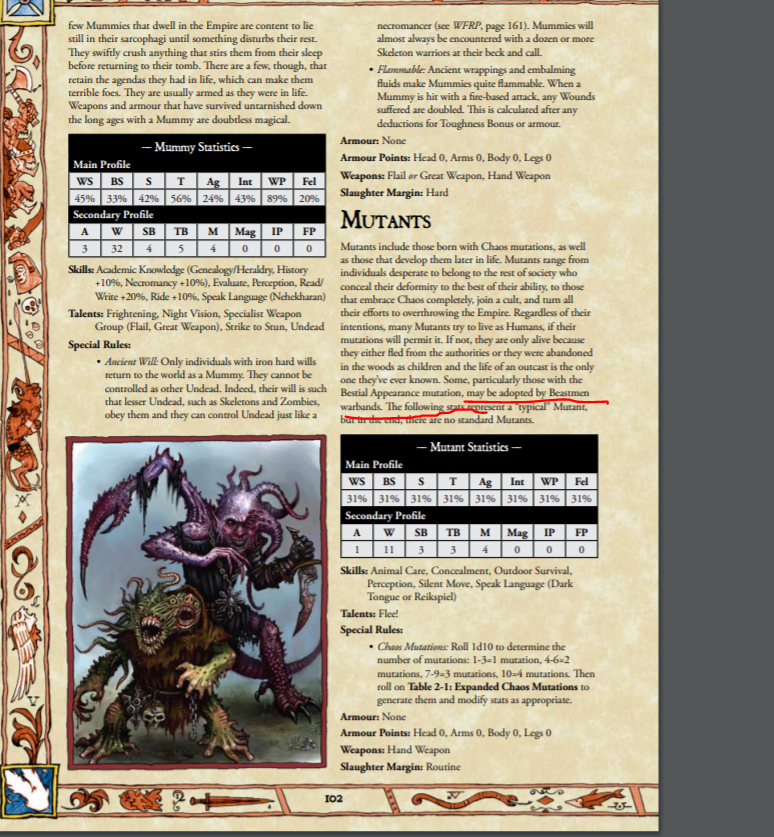 Mooncalw will summon corrupted moon shards in the paths of the new way stone system and in possible paths depending on in how he implants them it would give differentiating set of options or major catastrophe to all neighbouring regions, or benefits that may strengthen Enemies. if you make mistake it will take time fix them or break them further.

once he summon enough of these shards, it will give a permanent public order penalty to all races and increase likely hood of spawning rouge army and BM armies.


Free FLC side of Beastmen

Bret Side of LP 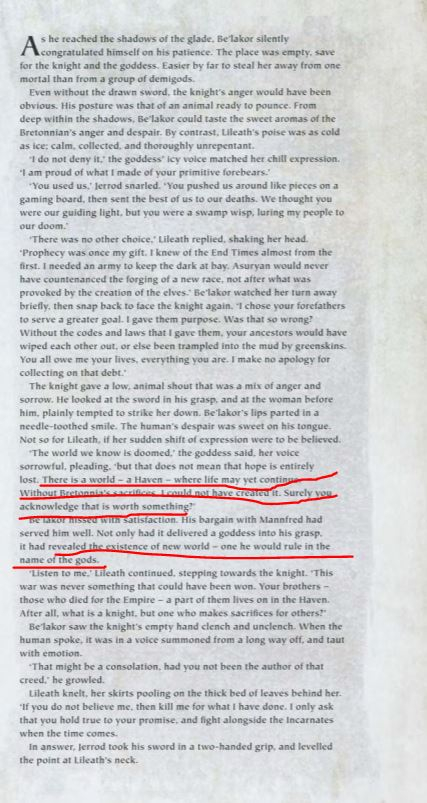 Genric Hero Naiad I would give them Lore of Light, High and Shadow since shadow Naiads are thing.


How to make naiads, well we do know CA likes to go cheap i would say remodel a Elvish ladys model and then use Fay animation set which is fitting for these ladies.

Naiads of court beneath 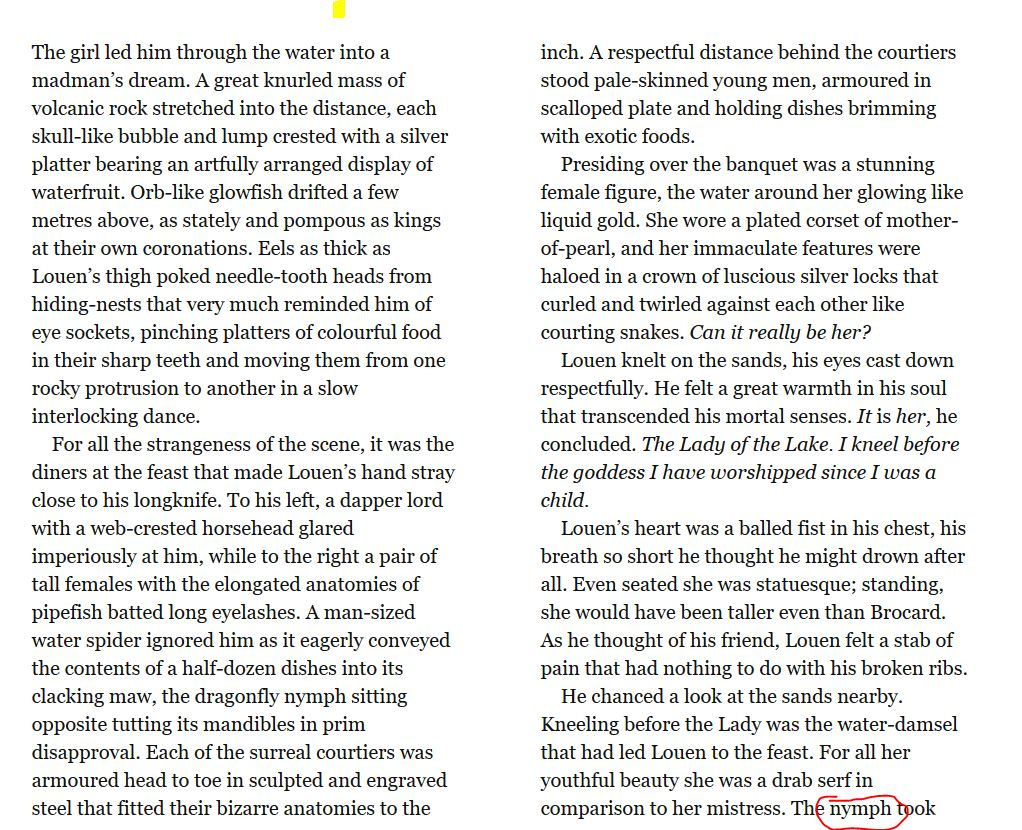 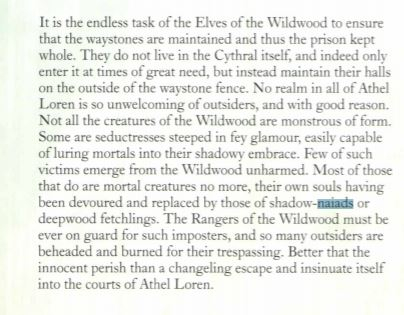 
This optional if they have the resource they should go for it if not then a blue horse for mounts like SFO mod for Naiad and Son of bretonnia or they can make these bad boys. 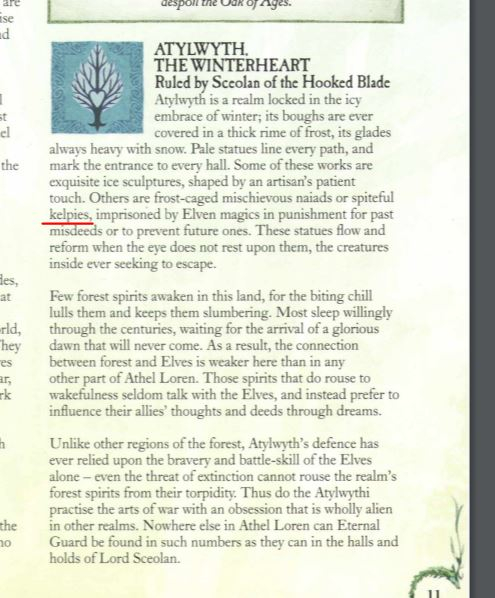 These guys if CA wanna be cheap can use tridents or long spears but if CA wanna do them right they can be flail cav. How i would envision these cav is they have really high Physical resist and are a melee cav with AP with extremly low model count with decent charge bonous.

how they will play :

Now these Ladies could be dismounted units but i find it barbaric for the courtier of the Lady to be fighting on foot . so i purpose we give them either kelpie mounts or if CA wanna go cheap unicorn or blue horse

they will instead of being melee unit hopefully get a ranged attack similar stalkers but with Low AP. since they use WOM as magic missile attacks they shouldn't get bound spells. apart from that they too will have low model count , ap in melee, high CB but low melee stats in General .

Giant snail rules from 3rd edition and how they will play

these guys will have very high HP, Low WS , low MA and MD , very low CB, Slow speed , but will come with a passive ability tied to their slime which gives fire resist to peasants which is change to their original rules. and will have a LD buff aura.

and as active ability it gives ammo to archer units only. 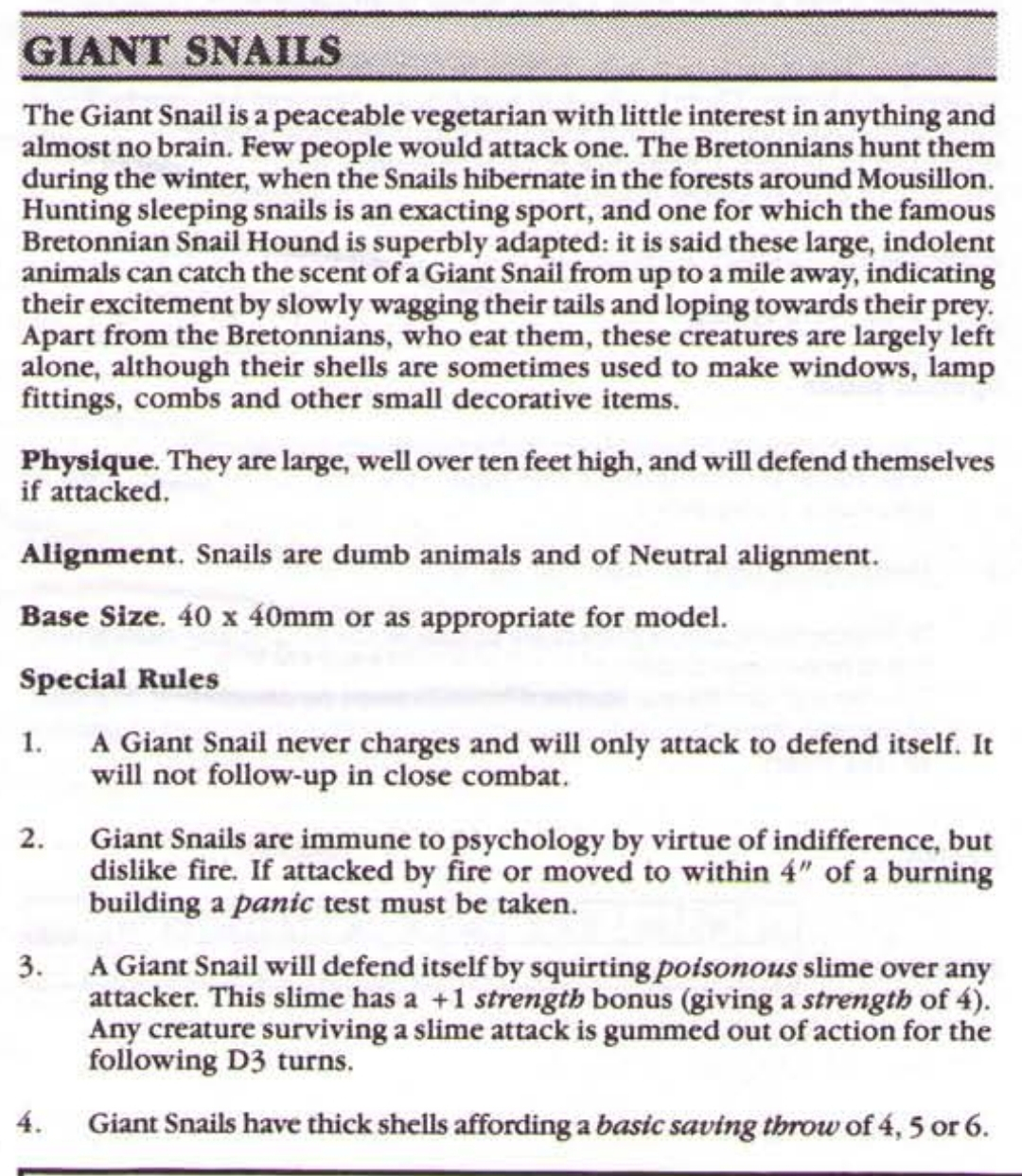 Now the Next unit could one of two possible units but Hopefully CA will pick one and this assuming Grail knights and Grail Guardians are reworked into 24 model units.

They are unit from court beneath story line and are guardians of court beneath Louen defeated one to get his second name from the lady because their description is not clear i feel like they could use Lot of Ancient salamanders assets to make them. or Merwyrm assets because there 90% chance their assets are in game. 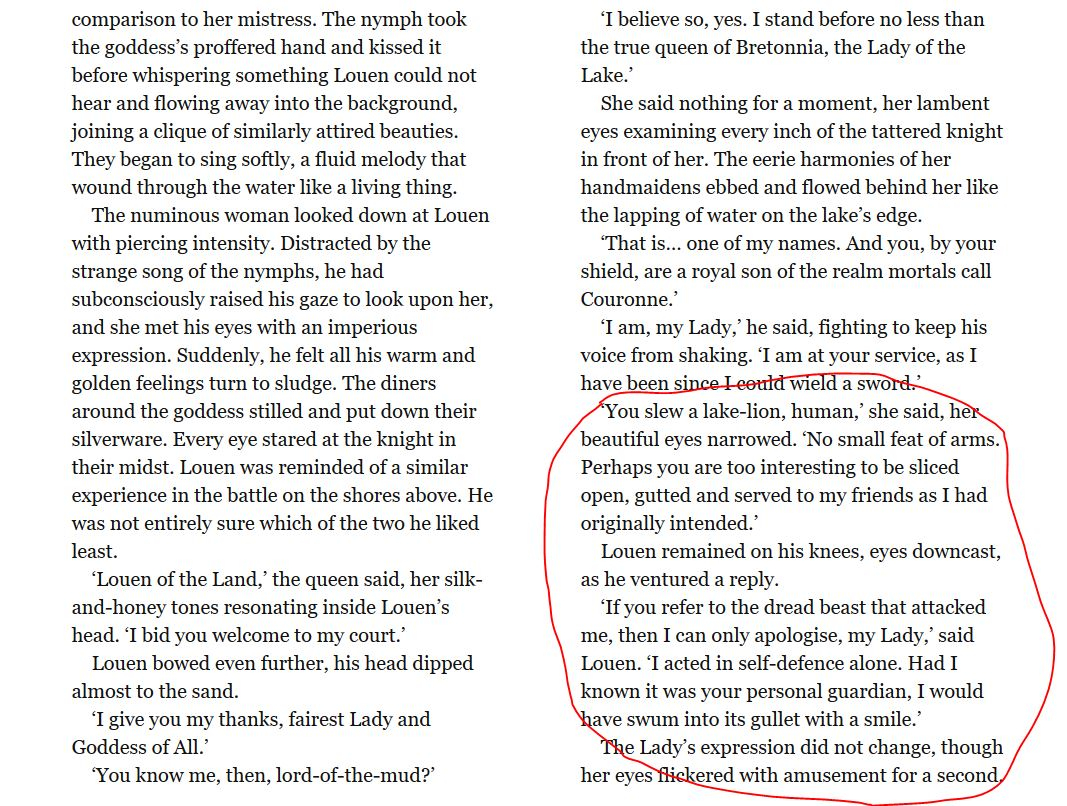 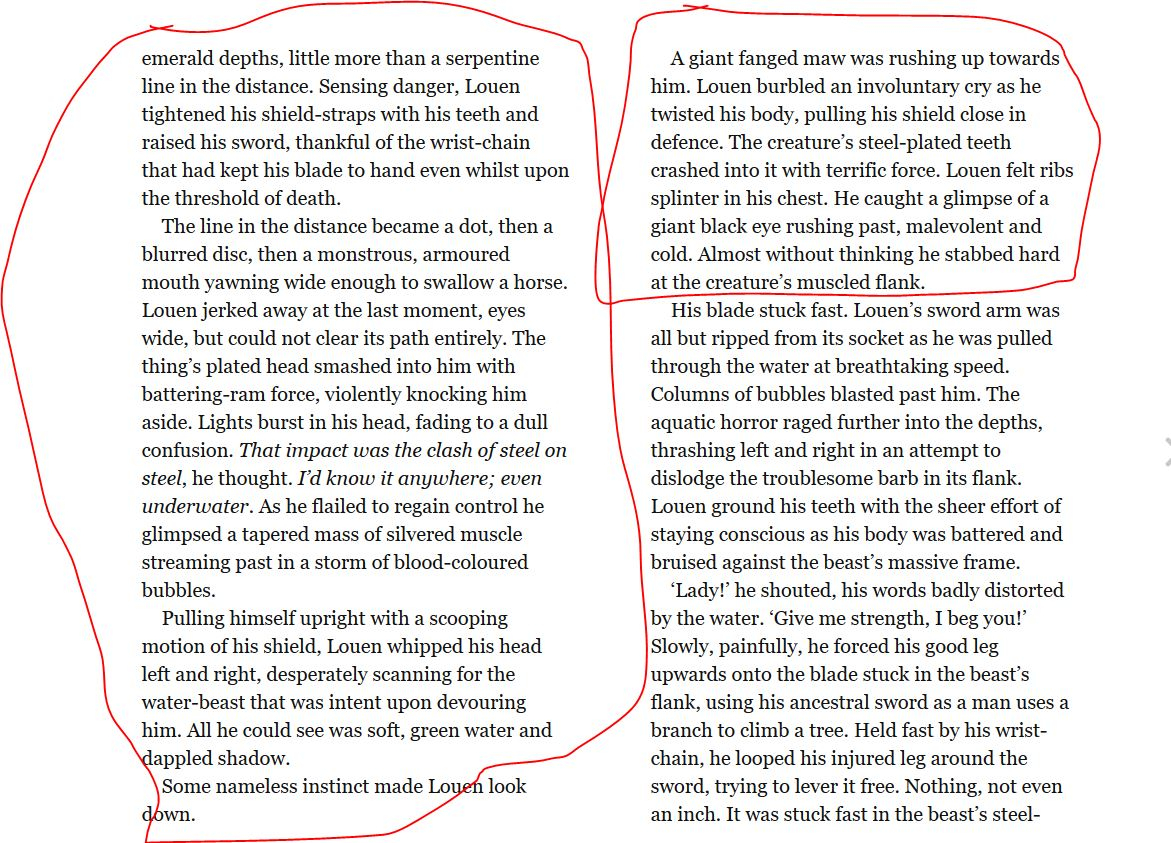 from concept art work rather than making them a multi model entity CA could make them in to Single entity like the New glade captain with Great stag mount, and is the easiest unit to make since they basically look like demigryph with horns 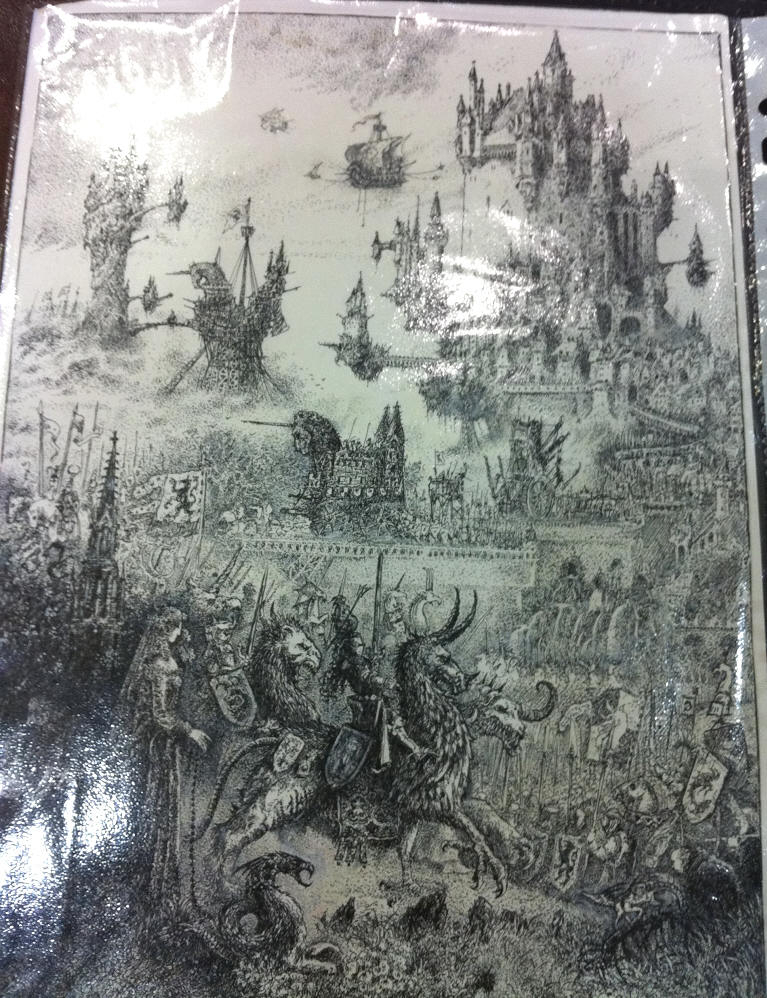 for the last cheap units in this lord pack

Hermulets , basically all the assets for these guys are in game

Hermulets with great staff based on Hugo Le petit miniature 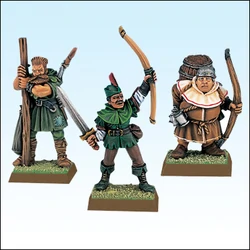 why would Landuin have use for them , it would be the most discreet way to get the man power he needs for the task.

secret power routes: Landuin must fix the lines that ae corrupted, and the hide them from prying eyes as well as eliminate the dark powers that yearn to find them. to fix these lines one must use various artifacts and break them for power and use the pieces to create the power nodes by fixing them you fix the realm of lady which in turn heal bretonnian land allowing moe knights to find their way to your cause and get greater blessings of lady at least temporarily. 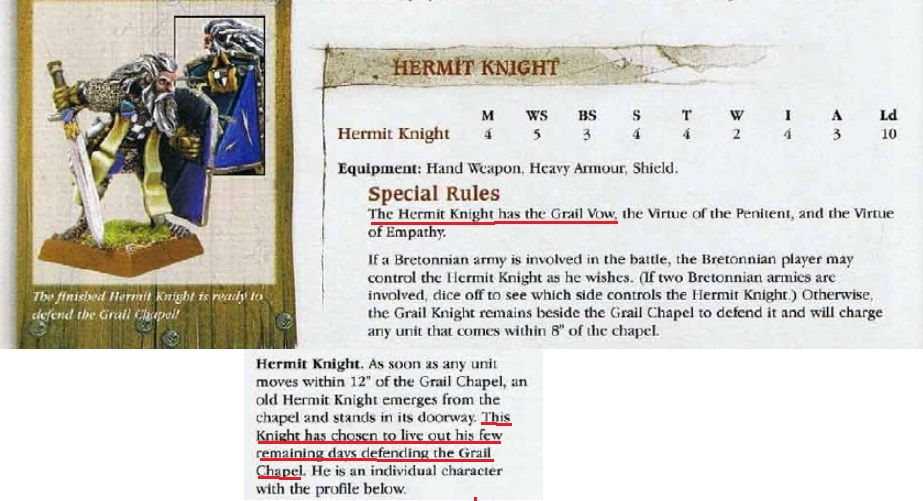 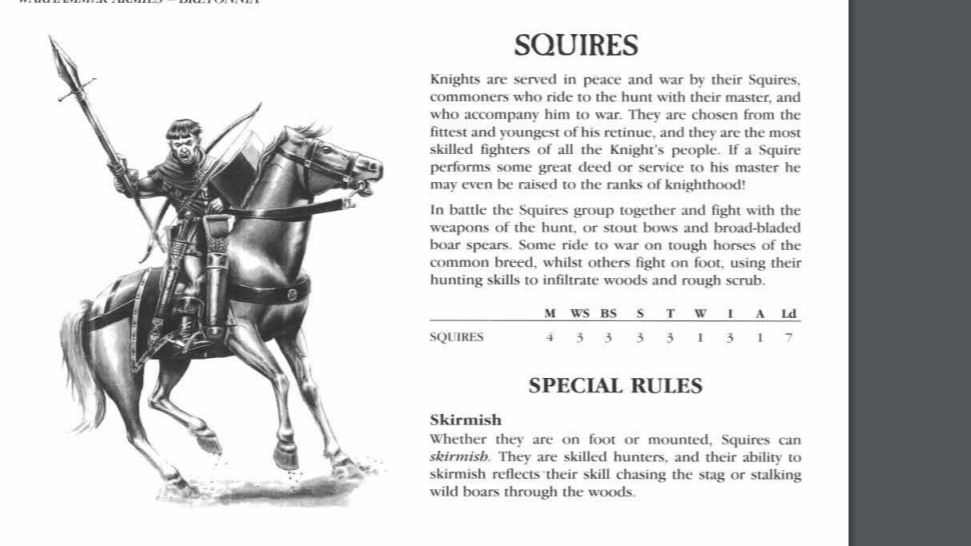 yeah yeah this might never happen but its as long as not zero i will have faith.