TheWattman Junior MemberRegistered Users Posts: 1,434
March 2021 in General Discussion
The addition of Rakarth ahead of expectations are pushing the (realistic) expectations for the last WH2 DLC towards a LM vs BM, for the purposes of updating the Beastmen in time for WH3. This means that the Lizardmen would be the first of the core races of WH2 to break the 6-lords barrier and end up with 7. Lets say for the moment that the ultimate limit of any race in the setting by the end of WH3 would be around 8, a number which is needed to properly accomedate the Vampire Counts, Empire and most likely the Greenskins. If this is the case, then this opens the door for a couple of DLC/FLC additions further down the road for the WH2 core races. Thusly, I would like to discuss the loreful way of implementing the WH2 races into WH3 and I'd like to dedicate this thread to the Dark Elves.


Dark Elves in WH3:
1. Straight off the bat, the chances may appear a bit slim. The Dark Elves have no immediate strongholds in the assumed WH3-playable area, but it does feel influence from the Druchii. The closest thing to it would be a Cathayan town known to the Druchii as Khairith Irlean, which was a port that a bunch of Druchii (Witch Elves to be precise), operating from a Black Ark, burned and brutalized so thoroughly that the Cathayans didn't even attempt to rebuild. And so, we can glanse one of the two ways that the Dark Elves could be represented in WH3: as an invasion force centered on a port somewhere along the coastline of Cathay. Its certainly a rivalry that could be promoted if the Dark Elves do deserve another LP and also that its not against the Beastmen now. Otherwise its just as easy to make it an FLC and let whatever lord CA sees fit to put in figure out something from there.

2. The 2nd lore-fitting option for the Dark Elves would be to have them operate solely out of a self-sustaining Black Ark, to truely highlight their raiding characteristics. And here we have a very lore-friendly cause to pursue. Duriath Helbane is the commander of the Black Ark Temple of Spite and he has been all around the East, fighting stuff in the Southlands, Dragon Isles and Ind. But now he is planning something bigger: an invasion of the High Elf colonies on the Lost Isles of Elithis. However, keeping with the core-race rule for now, then this addition would not be an LP, but rather an FLC adrift in the southern oceans. If the core-race rule is dropped though, then another DE vs HE LP could be a very real possibility. 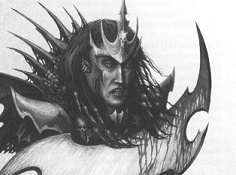 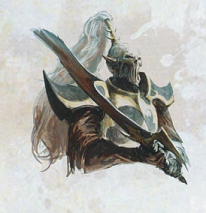 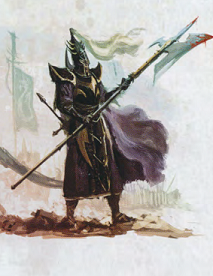 Duriath Helbane: As mentioned above, Duriath Helbane has a legitimate lore claim on the WH3 map, but he is also the more obscure and non-relevant of remaining Dark Elf characters (his lore comes from a small section of 7th edition). Yet still, he also represents the one Dark Elf major city that has yet to have been represented in the roster: Clar Karond.That city is the domain of the Helbanes and while it might not be available to Duriath in WH3, it will be on the big Mortal Empires. So perhaps a confederation mechanic like Rakarth's could be implemented for ME only? And also, as a Black Ark commander, would it not be logical to include proper Black Ark Fleetmasters and Reavers with him?

Tullaris Dreadbringer: Tullaris is the most fitting character with what remains in the general DE roster, like Statues of Khaine and Draich Masters, but he is also the one that has the least claim on the WH3 area. He is the Chosen of Khaine, so it might still make sense to have him battle some other chosen of some other god. Or perhaps, since the burners of Khairith Irlean were Witch Elves, then perhaps it should be interpreted as a Khainite expedition? In this way, Tullaris would be the leader of the Dark Elves in an LP, if they deserve another, vs an appropriate Cathayan, which is perhaps the most appropriate setup assuming the core-race rule for DLC still applies in WH3.

Kouran Darkhand: Kouran comes in the middle of Duriath and Tullaris in terms of lore-claims. He is mentioned in brief to having fought all over the world, including eastern places like Ind. However, his main placement is at Malekith's side in Naggarond. His inclusion could be motivated that Malekith has decided to take control of Duriath's expedition plans and launch an invasion himself and so sends Kouran in his name. Kouran also benefits from being part of the 8th edition book rather than 7th. It really depends if we want another Admiral alongside Lokhir or if we want a minion of the King, most likely another Anti-large alongside Rakarth.

What do you think guys? Do the Dark Elves deserve an LP? Should that come in WH3 and if not, how else should they be implemented?
Tagged:
Flag 2 · Disagree Agree
«12»