Yesterday I finished my Cao Cao's Fates Divided campaign and I took notes about some errors that I have found and I come to report them.
I have decided to put them all in a single post, if that is an inconvenience, then I will try to order them in the different sections of the support forum.

I have decided to put them all in one post, if that is inconvenient, I will try to sort them in the different sections of the support forum.
First of all, the new DLC with the new patch is an improvement to the game without a doubt and I think CA has done a great job in general terms.
Another point, I am a Spanish gamer and I play 3K in Spanish. When necessary, I will translate literally from Spanish, I hope this is not an inconvenience and I hope that many terms match the English version.

1) Mercenary Contract doesn't avaliable.
I try sign on Zhang Yan and the option is off. Zheng Jiang same thing and Yan Baihu or Lü Bu is out in 200BC
I start a new game in another date and same thing.

3) Cao Pi only have a blue steed.
I'm not sure it's a bug or a decision of the developers. The thing is Cao Pi appears with a blue steed (bronze rank) and you can't change for basic steed (iron rank).
Anyway, i just report it.

4) Spy/pawn don't unlock correctly
When you rank up or unlock a new reform that increases your number of spies / pawns it is never unlocked instantly. You need to do an action: some kind of new diplomatic agreement, appoint a new administrator ... some kind of thing that generates an "event" for the game to refresh your number of pawns. Spies not problem.
PS: Ofc, i am speaking of new Cao Cao mechanics, conspiracy.

5) Discredit character doesn't work
I'm not sure it's a bug or a decision of the developers. But you discredit a character one time and if you want discredit more, you waste your spies points but not change, not accumulate. Is stuck in -30 (plus -10 with discredit faction).
If it's intentional for players not to spam to discredit when your spy has a lot of points, that's fine. But, at least, overshadow the discredited character or some indication to know that you can not do it anymore or skill has already been used ... whatever
If not, it's a bug.

6) Can't kill the faction leader in spy plot, The leader is a court noble.
In my game, my spy in Zhang Yan faction was the heir, Zhang Fang. I never had kill leader available and in spy section, Zhang Yan shows as court noble, not as leader. In fact, sometimes heir fail also. Spy sections have a lot of problems in this point. 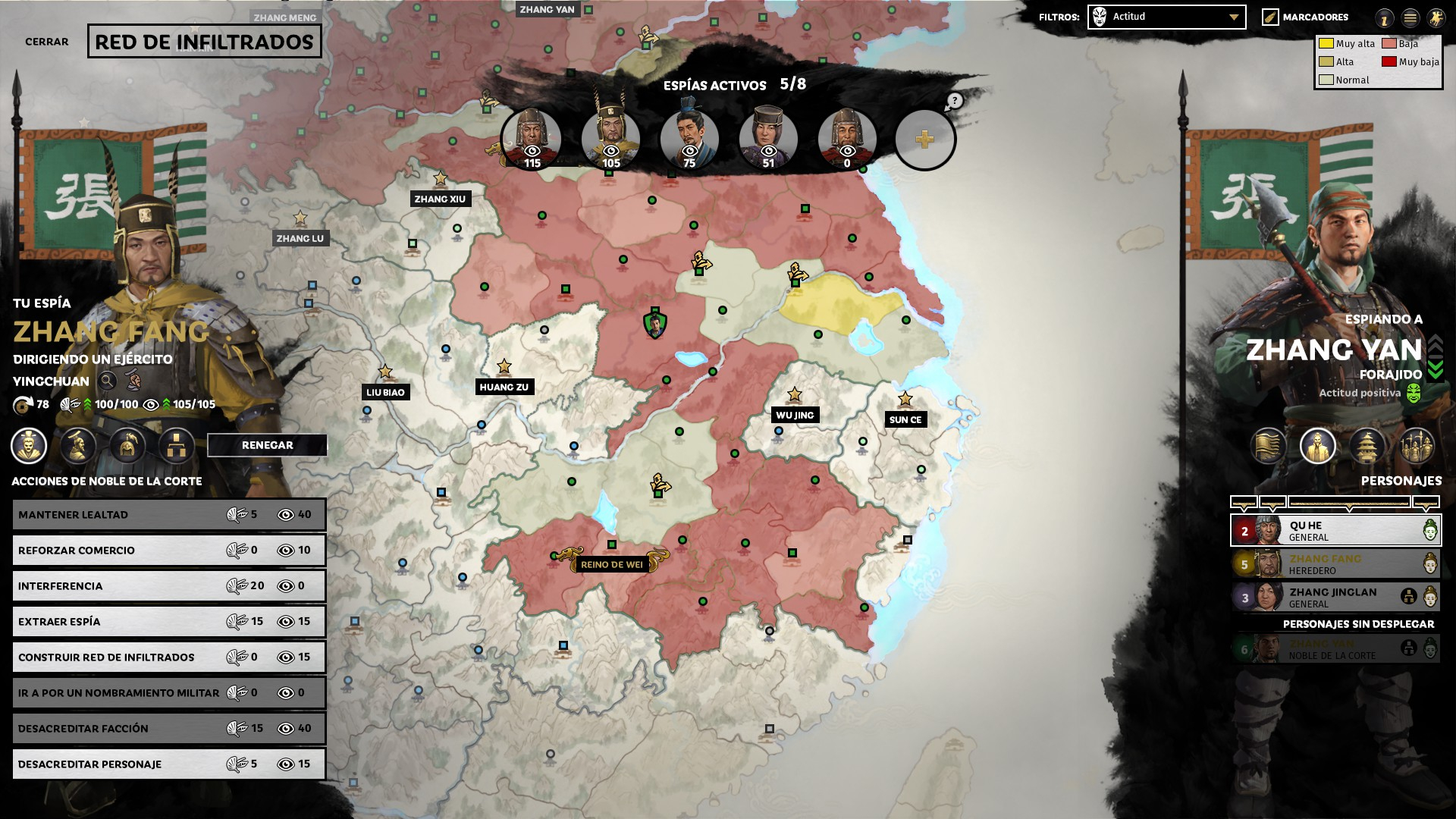 7) My spy doesn't surrender his faction
Same context above. Zhang Yan died by natural issues and his heir Zhang Fang is my spy and now is the faction leader too.
How he surrender his faction? i can't anex, i can't confederate, i can nothing. No option in spy section.
Well, i can improve faction relationship... with who, with my spy? my spy is mine, right?
It's not sense, really.
I try to start a civil war, then a new limbo faction leader (this new leader is my vassal, just like previously Zhang Yan/Zhang Fang was my vassal) appears and my spy Zhang Fang appears with an army and on his first turn he approaches his capital and waits there. Not war, not battle, nothing, just wait there.
Is that a civil war?
PS: I conquer the old Zhang Yan's settlement and the Zhang Fang's army dissapear. I guess, he was in ambush stance the rest of the game. Finally, "Destroyed faction" tab appear for Zhang Fang some turns after.

8) I can't send spy to Zhang Lu and Zhang Meng.
Just never appear like a options. I knew those factions and they are in my limes.

9) Annex is not available for Bandits
Maybe is intentional. The case is i can convert bandits in my vassals but i can't annex (or confederate) them.

10) Siege battles, battles in walls.
Here some bugs, mainly in walls:
10.1 - Your units don't run in walls, only walk. Sometimes, even they don't run inside city.
10.2 - Your units not conquer towers because they refuse stand in the beacon aka under tower (in walls). Sometimes, you have luck and -maybe- 3 or 4 soldiers (of 240) stands under. Even unit position icon don't appear sometimes under tower.

11) Empire with Yellow Turbans.
Form empire is available with yellow turbans factions (and yellow rebels) like a Han Faction. Is intentional, not cultural differences anymore?

12) Some issues with new mechanic, Imperial Intrigue.
12.1 - Imperial favor is open all game.
I kick out Xian Emperor and i am The Emperor now but you remain lose or win imperial favor after battles.
12.2 - In my campaign, Sun Ce is king and proclaims himself emperor but remain in Imperial Intrigue and with the max level. should not be a enemy of Han automatically?
Just like Yuan Shu, you have a event about that in A World Betrayed but that event coexists with Imperial intrigue unaltered. I mean, Yuan Shu win and lose imperial favor. (This case is in my new game in A World Betrayed)
I think this must be reviewed right now. It's totally no sense.
12.3 - I am attacked by a Han Faction and just me lose imperial favor? can't defend me, Emperor hate me, maybe?

13) New Vassal hate you.
When you give independence for your admin, in next turn, that new vassal hate you because attack his friends, enemy deals...
I check his guanxi and nothing matches. His friends are me... and enemy deals, well are you a new faction?
Sudden change always on the next turn. Before, ofc when you give independence, he is so happy with you.
The funny fact is, if i annex that vassal again, he return so happy with me.

14) Imperial vassal don't support me
I form a Empire (Alliance diplomacy section) with 2 vassals, one of them have standar vassals also. I start a war and can't call to arms my empire vassals and ofc, they don't declare war automatically at my new enemy.
Just be vassal for take money?

15) Heavy crashes in Shi Xie territory.
I don't know what happens in that side, but if you do zoom in some sections, game crash. I dodge this crash with long zoom out.

16) Replays crash sometimes. Replays of previous patches shows a lot of errors, but i guess this is normal.
*I even have replays from 2019 1.0

18) Yellow river in battle mode.
Well, it's not a bug but when you fight near yellow river, its blue not yellow. This 'bug' has been alive for a long time.
*Yes, aesthetical bug. Not great deal.

19) In selection faction screen. A world betrayed, Shi Xie is a Warlord, not a Regional. In Destined Divided is well, is regional.
*Yes, aesthetical bug. Not great deal. 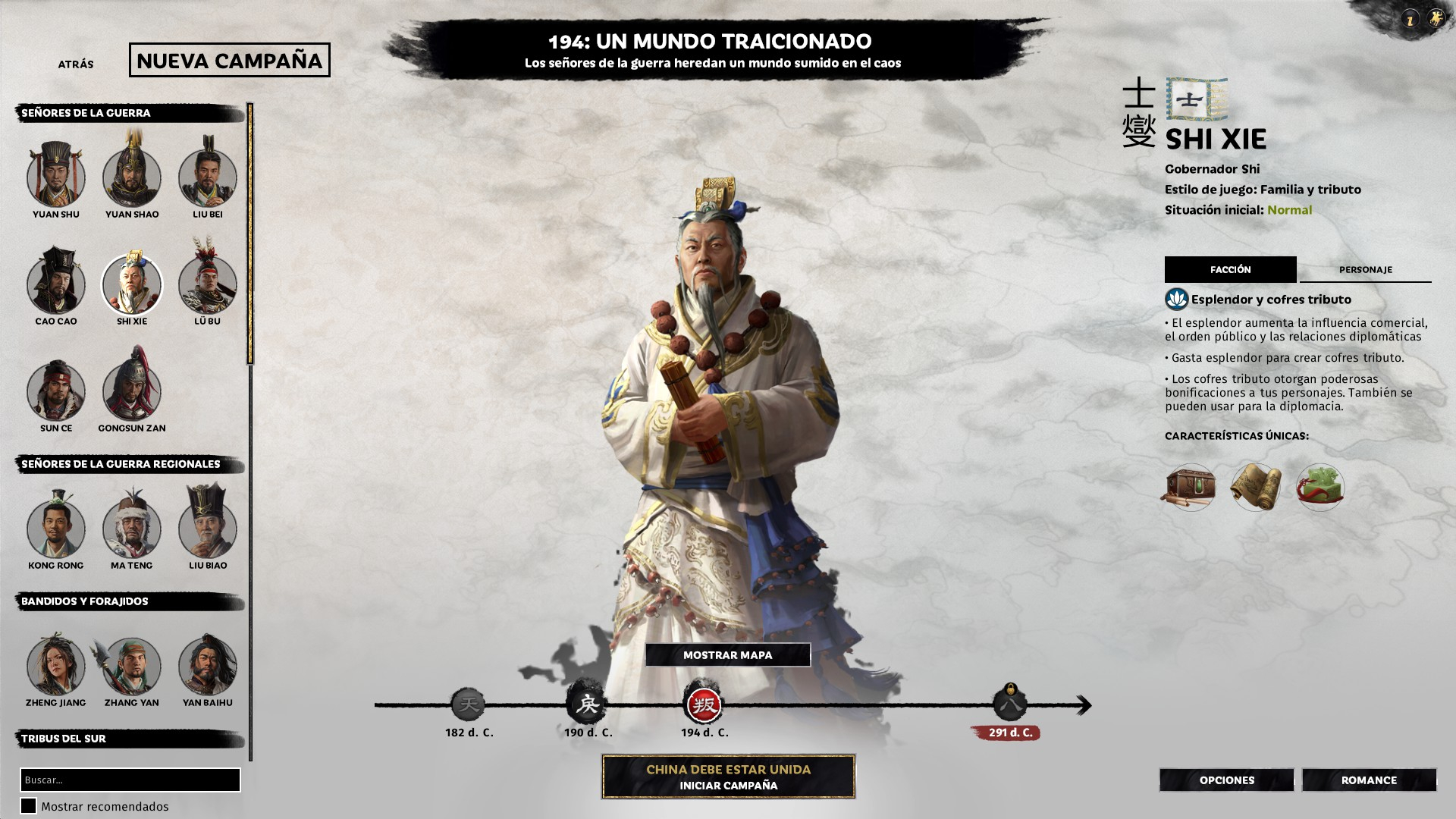 20) Support vassal independence don't work
You give your support and then the vassal don't declare his independence. Moral support or how works now?
*Same problem in previous patch. 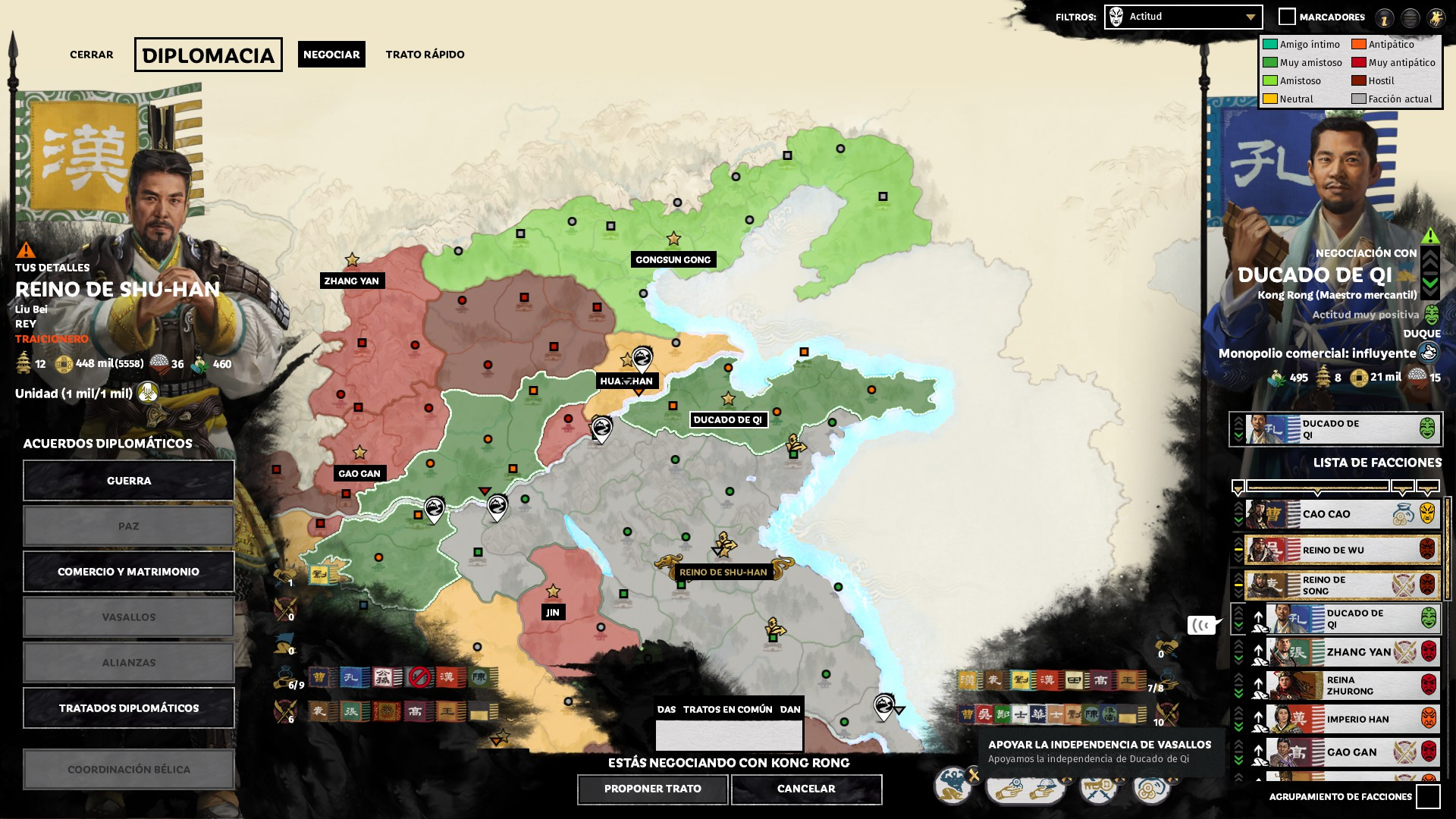 21) Zangke, Wulian port-city
I had a allied battle there. I played as reinforcement. Deploy site was in front river. Was a bit odd. 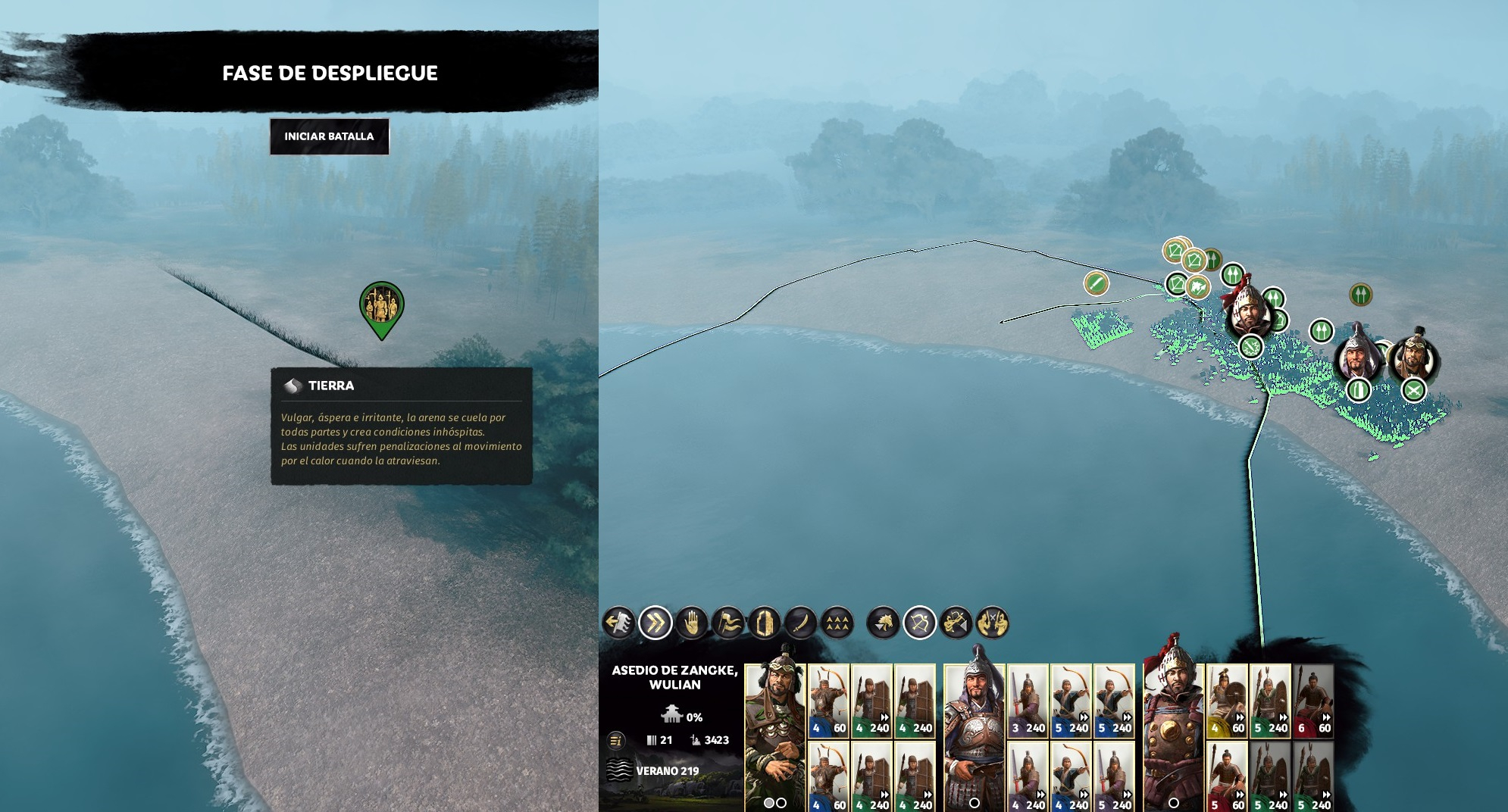 22) Vassal Mulu
I was in war against Mulu, i conquered his last city and there was a vassal option (in fact, i only found this option against Nanman factions, is intentional?). I do it, then he was my vassal and enemy at same time. 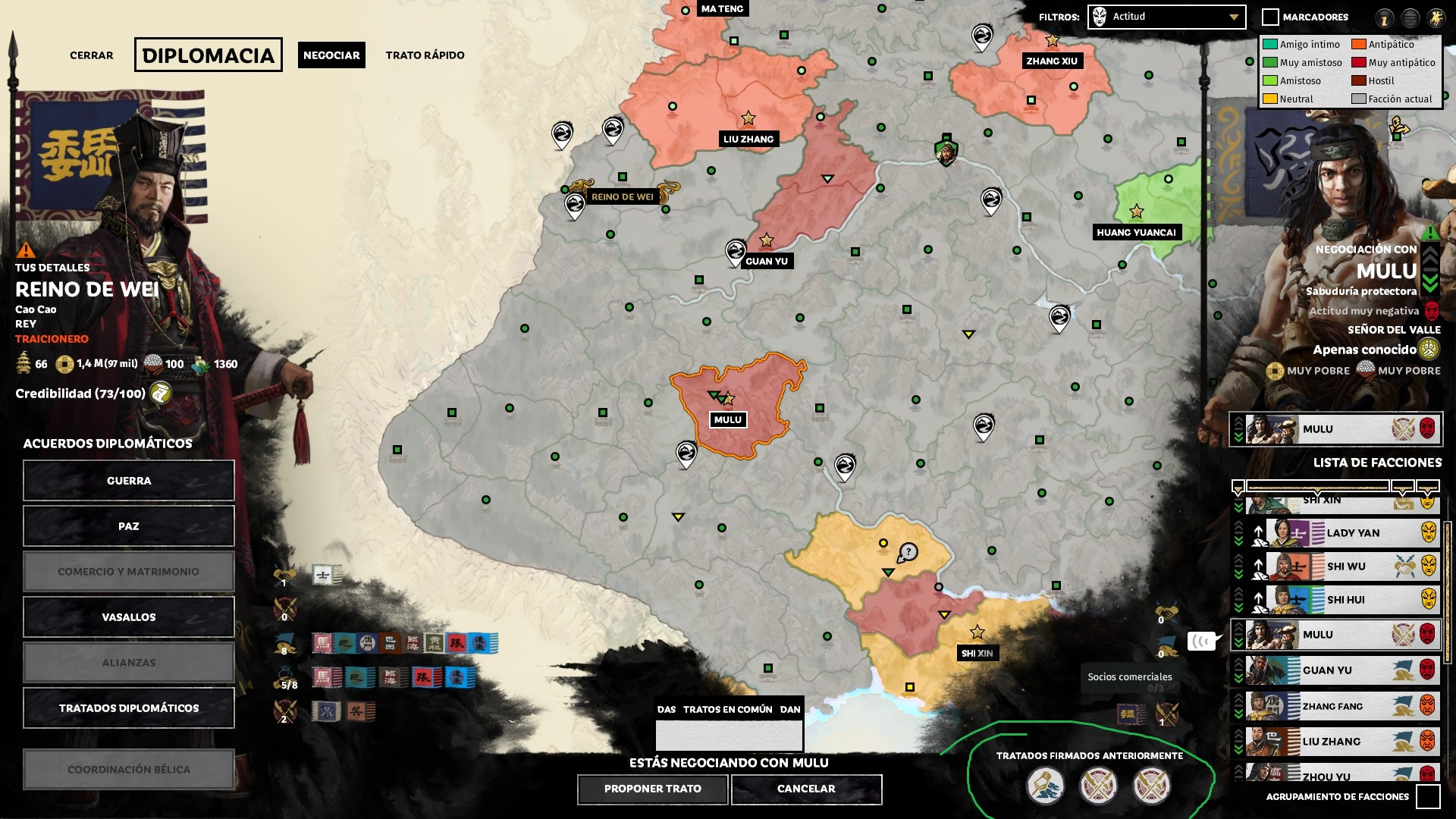 23) War Coordination Objectives
When my vassals reach their objective is 'canceled'. Should not be 'accomplished'?
*Yes, aesthetical bug. Not great deal.

24) Polluelo de Fenix
I know that Pang Tong is known in English as 'Fledgling Phoenix'. In Spanish, literally, it is 'Polluelo de Fenix'. Trust me, in Spanish it sounds weird.
I propose a change to Pang Tong's alternative nickname 'Young Phoenix' (in Spanish, Joven Fenix). That sounds a lot better, like a more dignified person.
I am speaking about spanish version. In english not problem with remain Fledgling Phoenix.
*Yes, aesthetical bug. Not great deal.


Well, this is all for the moment. I have a few more notes but they are more interpreted as developer decisions than bugs.
Maybe, I make a post in general discussion exposing them.
Anyway, I have to say that these bugs are not a big deal and I was able to enjoy my campaign with Cao Cao on Fates Divided.
In general terms, this DLC has greatly improved the game and I hope that CA continues to improve it as it has been up to now.
In the same way, I hope I have helped the patch developers to detect bugs that improve this great game.