No "update" to Warriors of Chaos

bradleyvincentwells Registered Users Posts: 335
May 2021 edited May 2021 in General Discussion
This is an observation. Not something a dev or a person at Creative Assembly said.

The recent live stream showcasing Khorne's units for TW:WH3 was interesting for a number of reasons. One of those reasons involved a unit titled "Chaos Warriors of Khorne." These units looked like Khorne-skinned versions of the "Chaos Warriors" unit from the Warriors of Chaos faction from TW:WH1.

When you look at the unit card stats, there are differences. These differences are expected, but worth noting (screen cap taken from ItalianSpartacus' live stream): 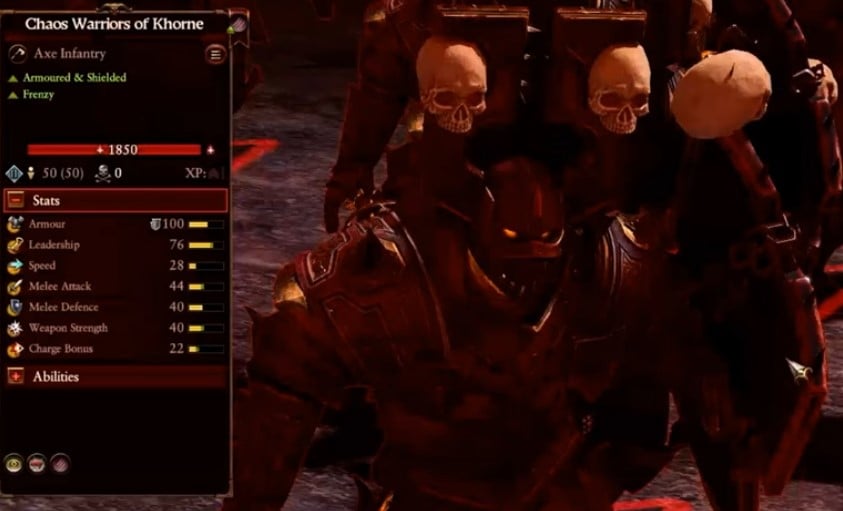 Seeing this, it makes me wonder if THIS is the actual rework to Warriors of Chaos that many have wanted since the first game. By "this" I mean flavoring each of the Chaos units with god-specific traits (ex: Frenzy for Khorne) and stats. If so, what does this mean for the Warriors of Chaos faction in the third game?

Personally, I would have no issue with CA simply doing away with the Warriors of Chaos faction. It just seems bland and redundant now that we know that monogods are in TW:WH3 and that units will get flavored to their respective gods. Additionally, a WoC legendary lord like Sigvald clearly needs to move over to the Slaanesh faction in the 3rd game. Finally, I don't see WoC as a Chaos Undivided faction. It is more of a Chaos Neutral or Chaos "Blah" faction now. It was flawed when it came out, and it looks even worse now after the Khorne reveal. However, I understand the problems with eliminating the faction considering people paid for it.

I am curious to see how CA will resolve this. I do not think the WoC faction simply needs a stat update and a few new mechanics. The faction itself seems worthless now. Perhaps the best solution for the third game is to dissolve it and parse the LLs out to various new factions. I would assume the Sigvald would go to Slaanesh while Archaon and Kolek would reside in a new Chaos Undivided faction with Bel'Akor as another LL. For the people that purchased the WoC DLC, they would unlock Achaon, Sigvald, and Kolek for their respective factions in the third game's version of Mortal Empires.

Overall, I love what the new Khorne units seem to offer. Excited to see the next batch of Chaos units.
Tagged:
Flag 2 · 18Disagree 2Agree
«12»