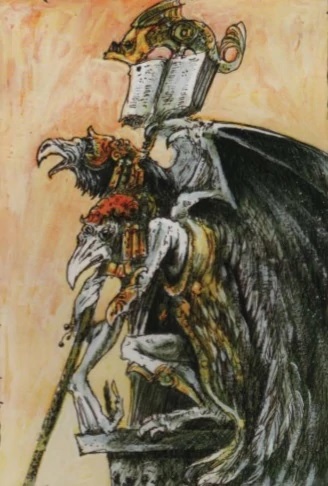 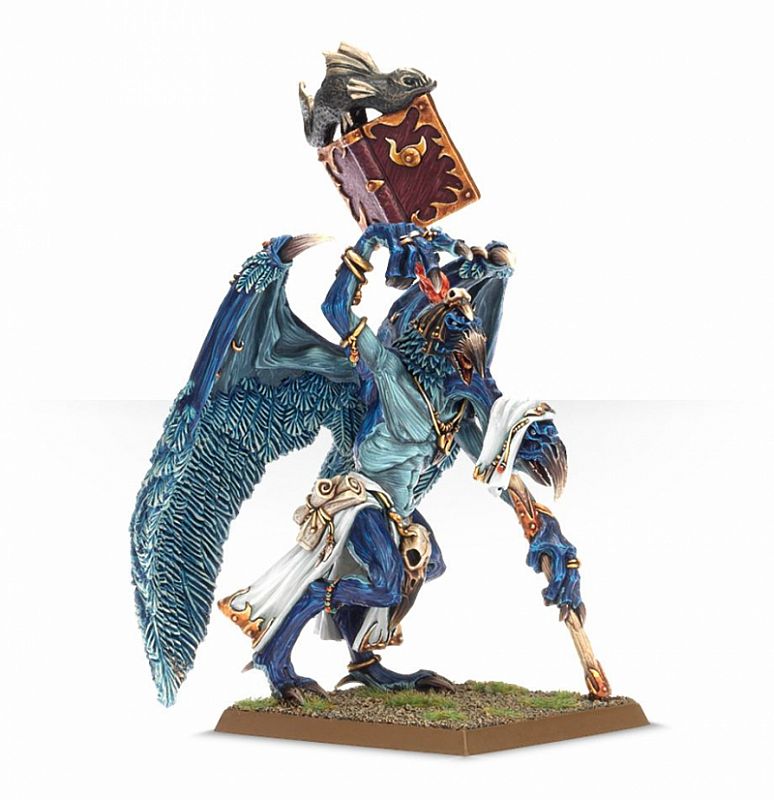 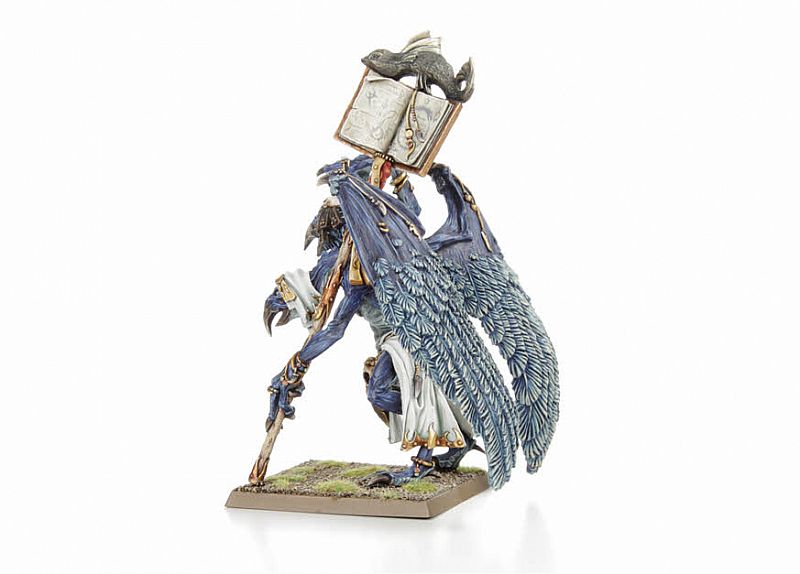 While some people see this miniature and conclude he looks a bit weak and fragile because "ass old miniature", that look is probably on purpose due to his lore+rules (see below). 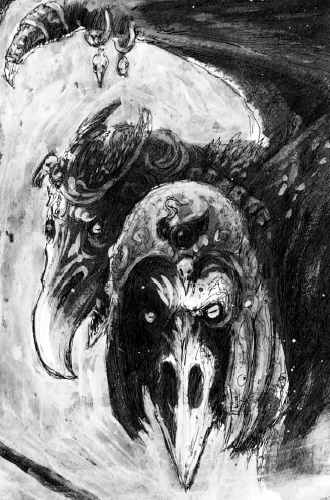 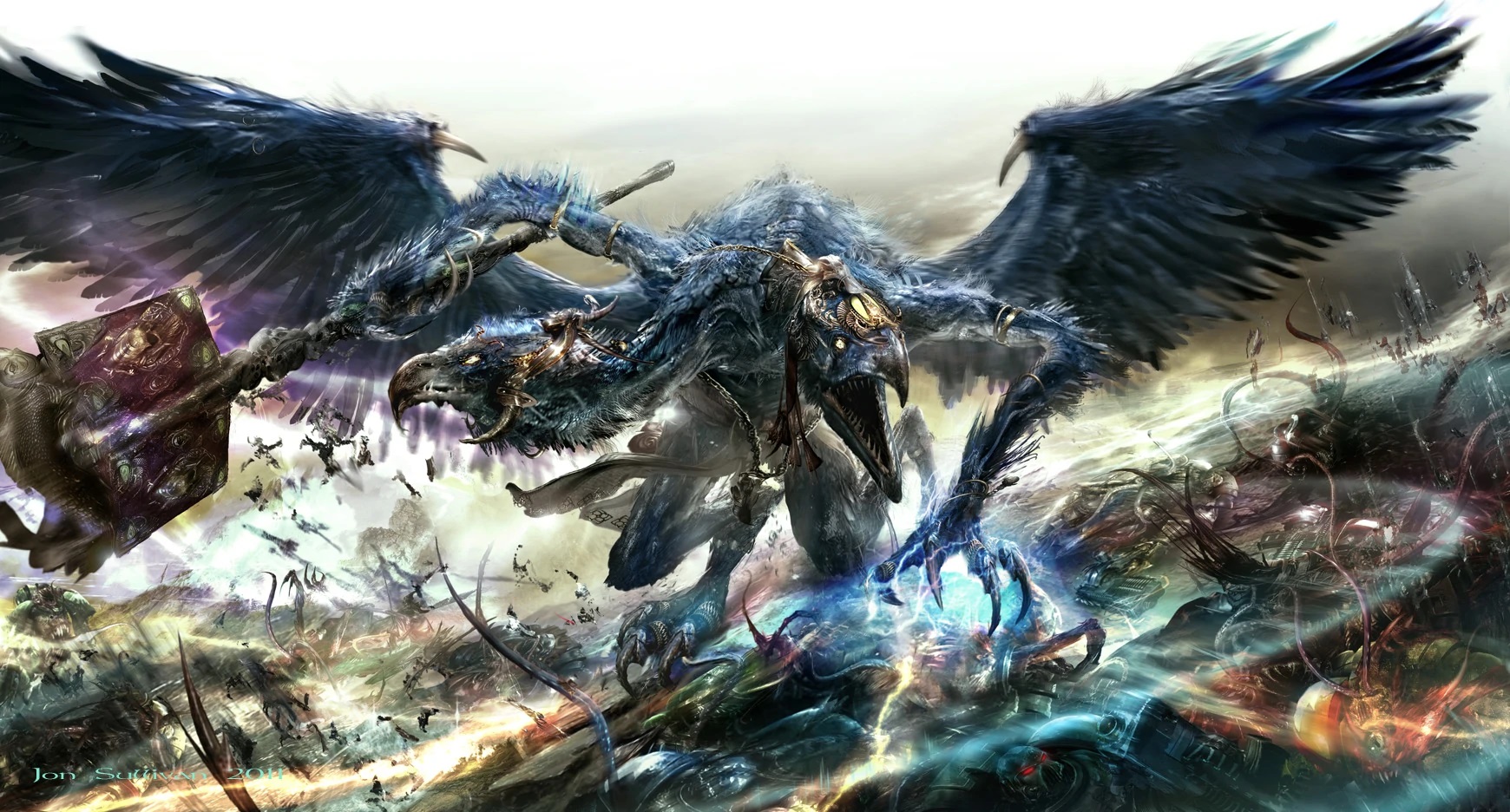 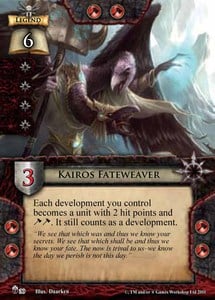 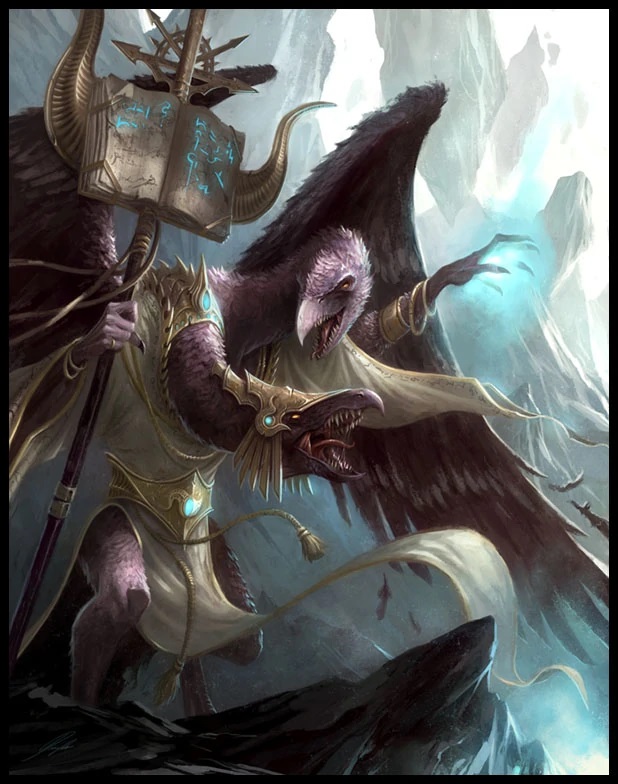 Kairos was introduced during 7th edition with Daemons of Chaos, and sticked around for their 8th edition armybook as well. 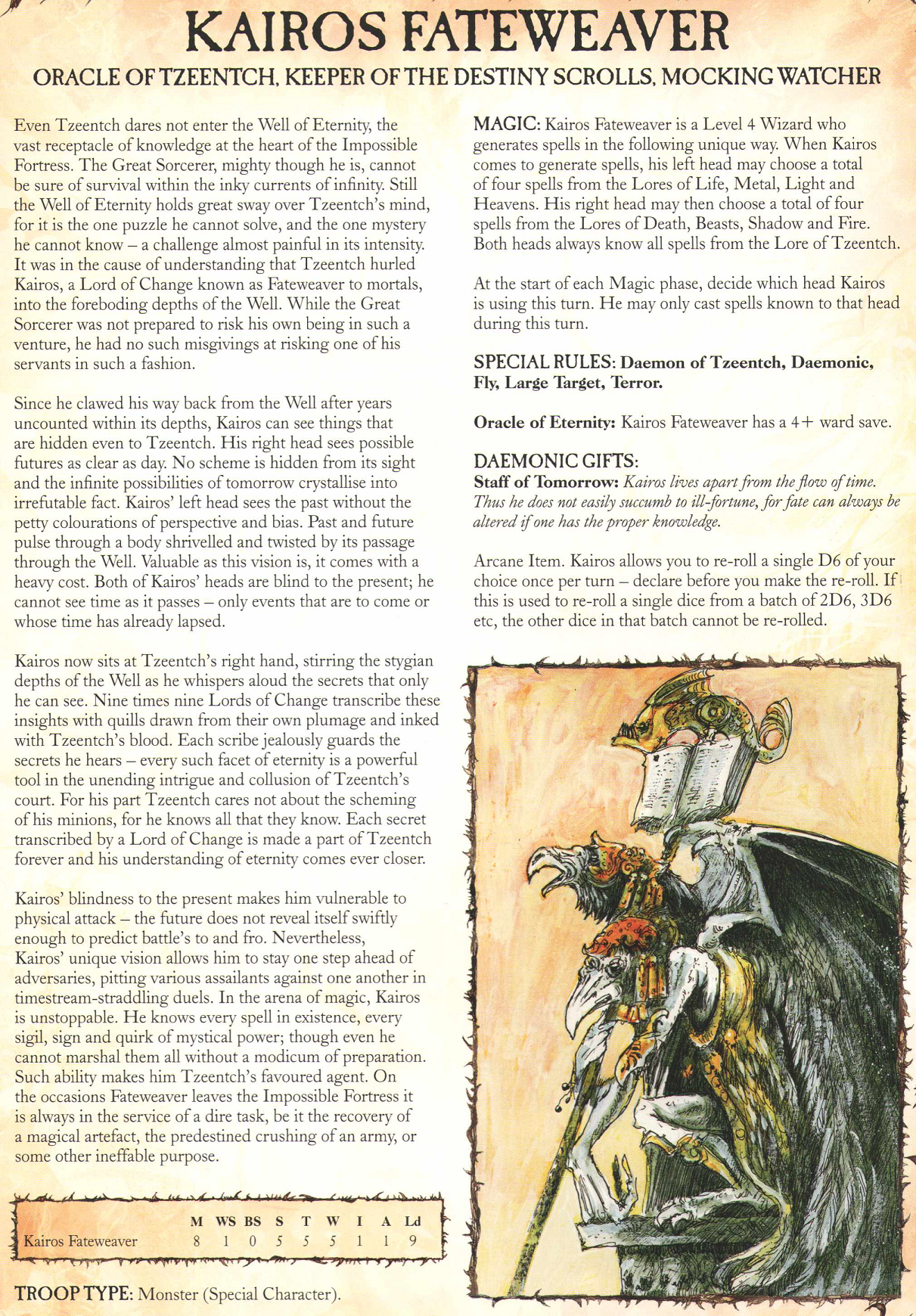 As his lore depicts, he is very inept in melee combat. Which is reflected by his terrible profile in regards of Weapon Skill and Attacks. Also all his other stats are equally handicapped compared to a normal Lord of Change.

Which might explain why his WHFB miniature looks a bit "sad" compared to a regular Lord of Change, who as a Greater Daemon is still a beast in melee. 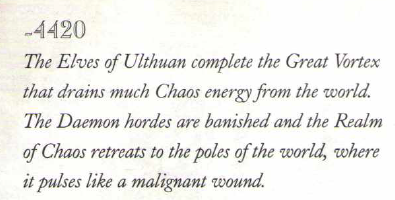 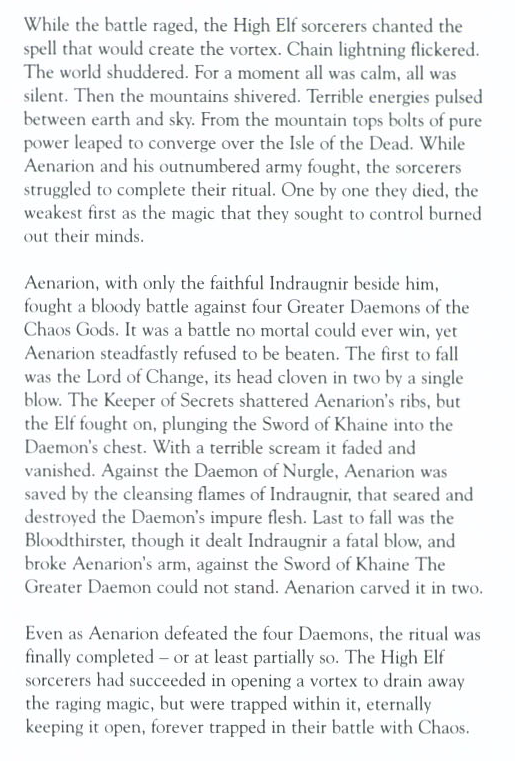 One of the four Greater Daemons Aenerion fought, was Kairos Fateweaver, as named by the "Blood of Aenarion" novel 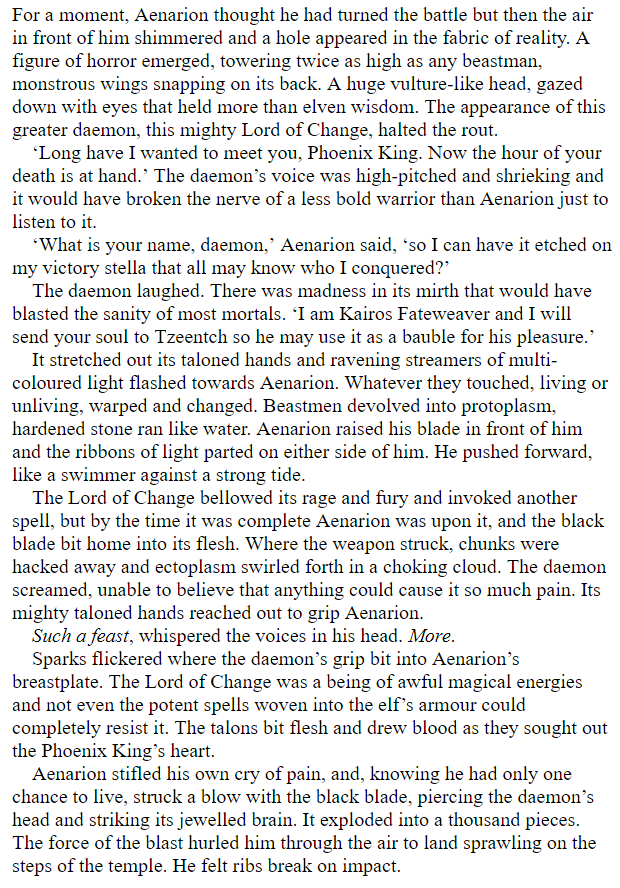 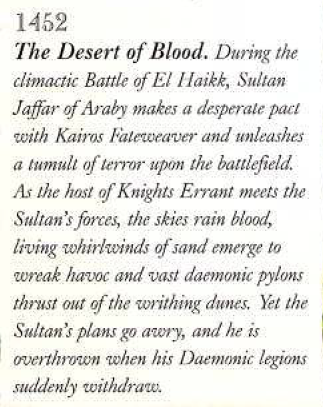 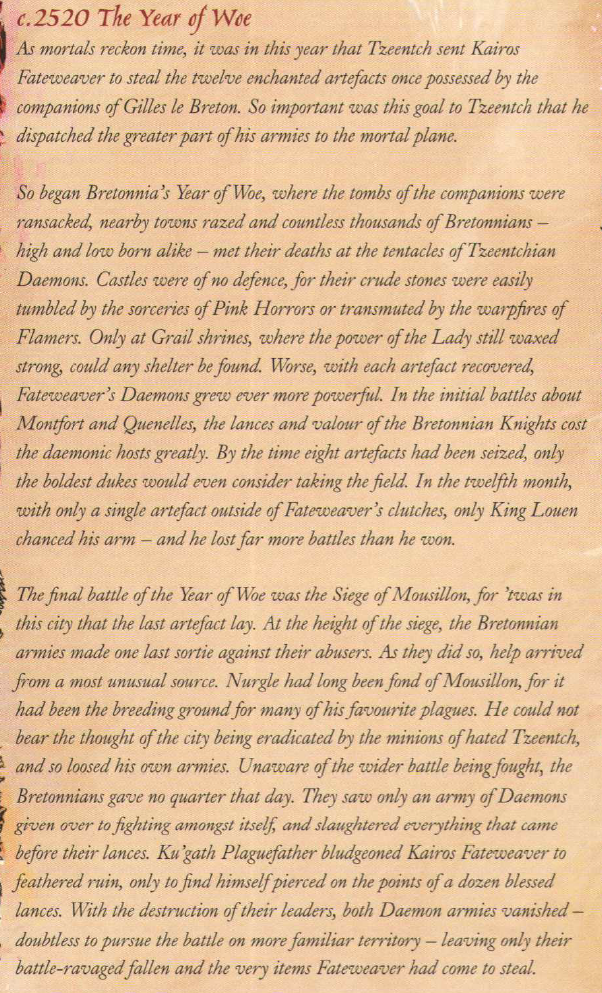 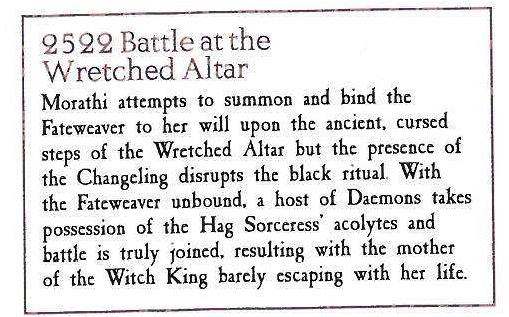 During "The (horrible) Endtimes", Kairos was participating in the battle of Middenheim. 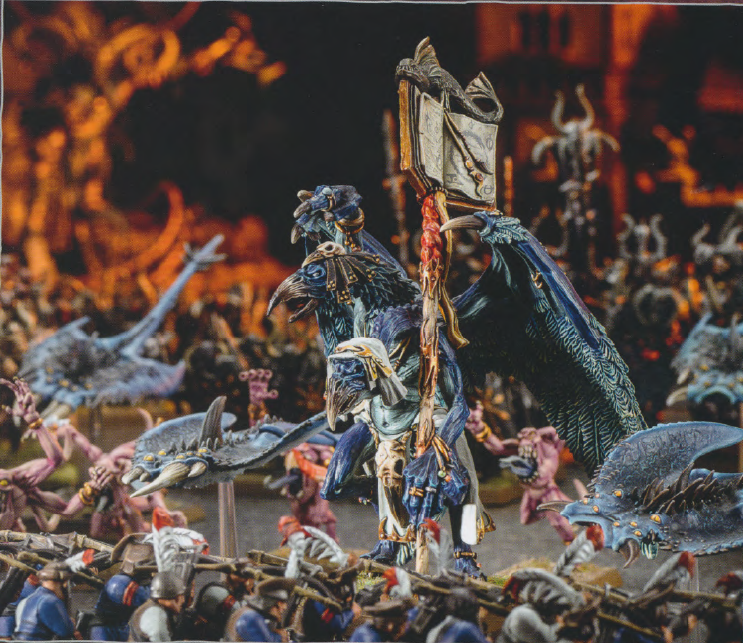 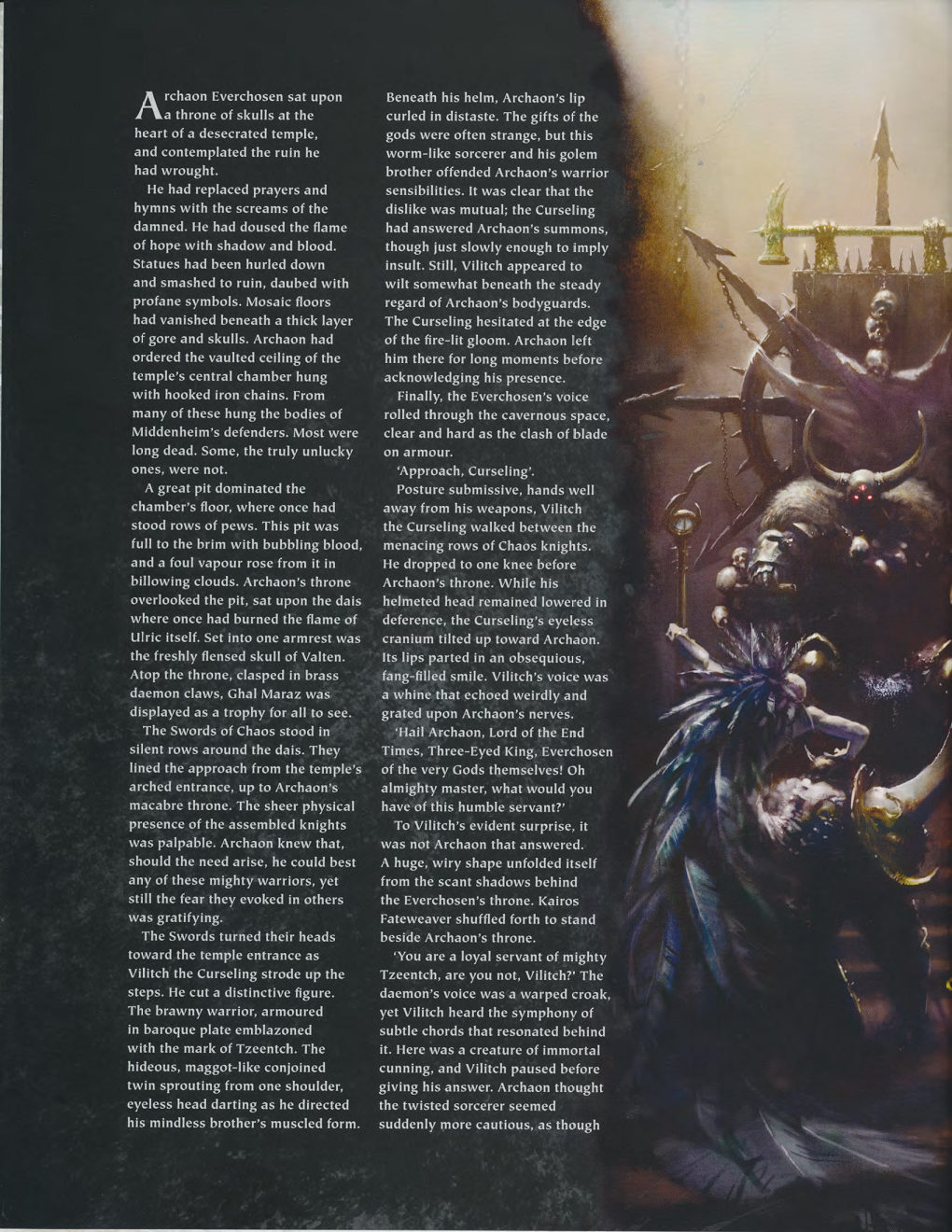 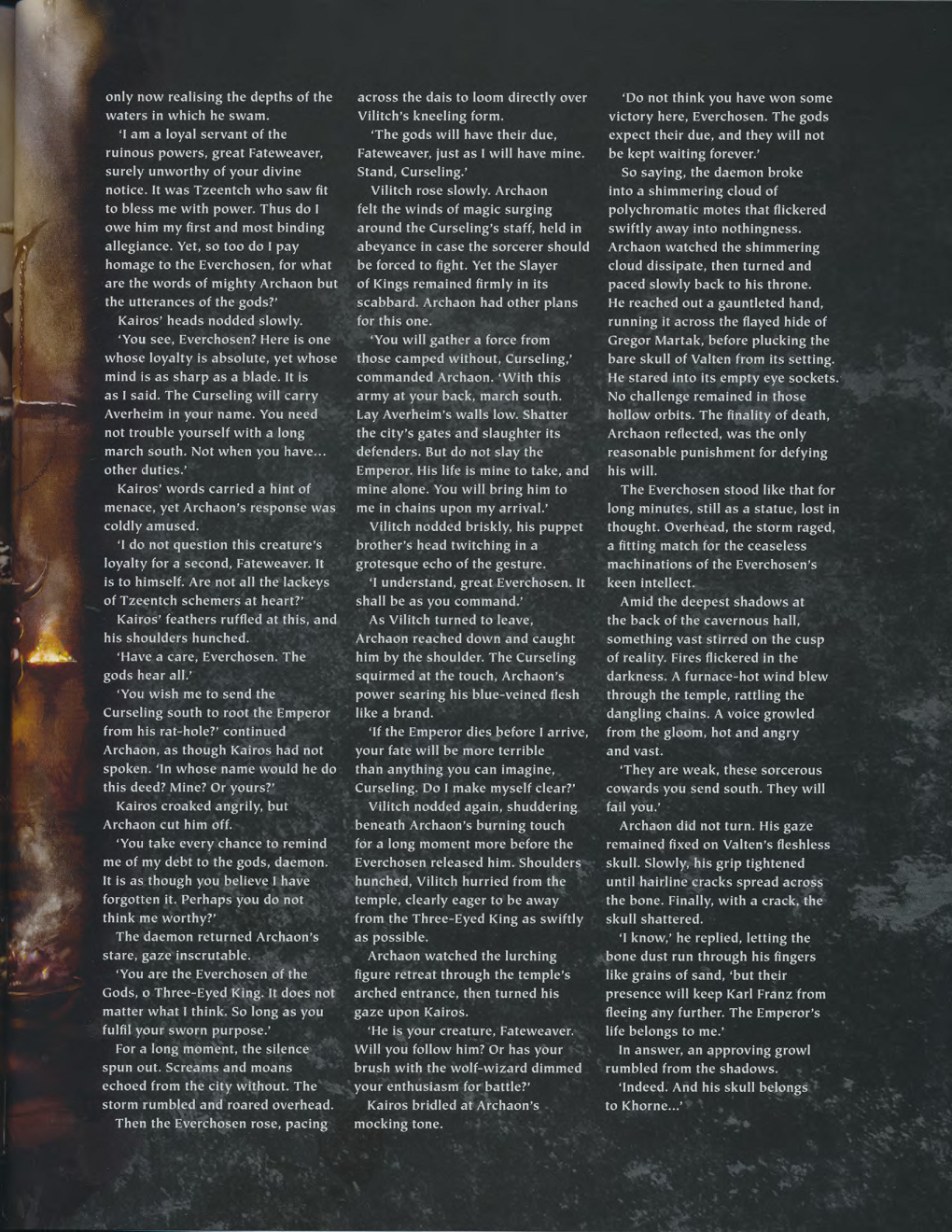 He was later killed in the "Archaon" campaign book by Archaon himself. 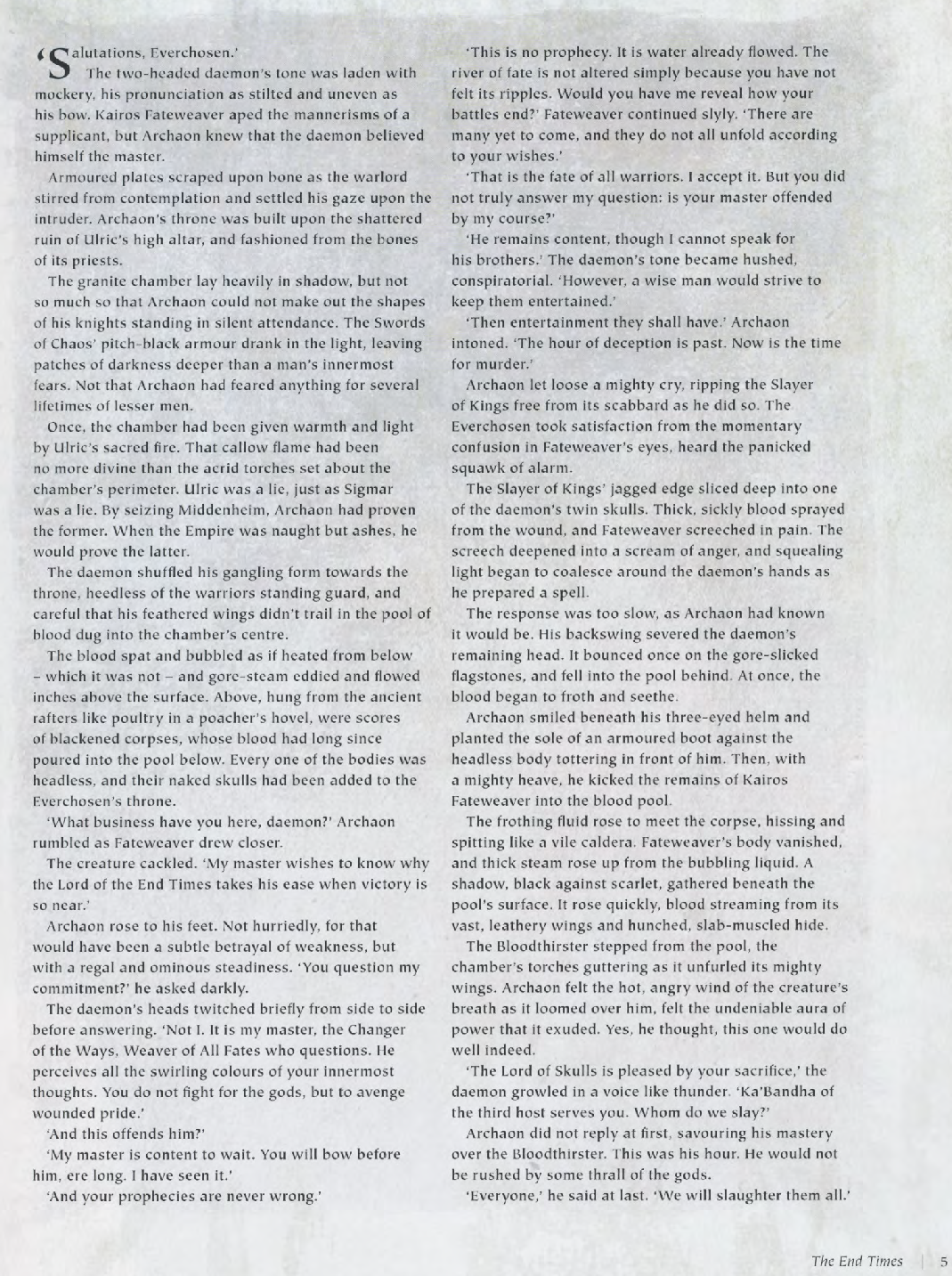 As a daemon he certainly survived the end of the world and transitioned over to AoS. 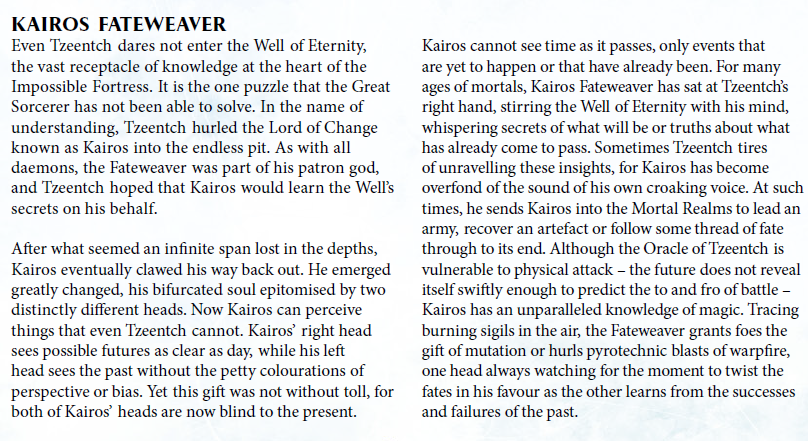 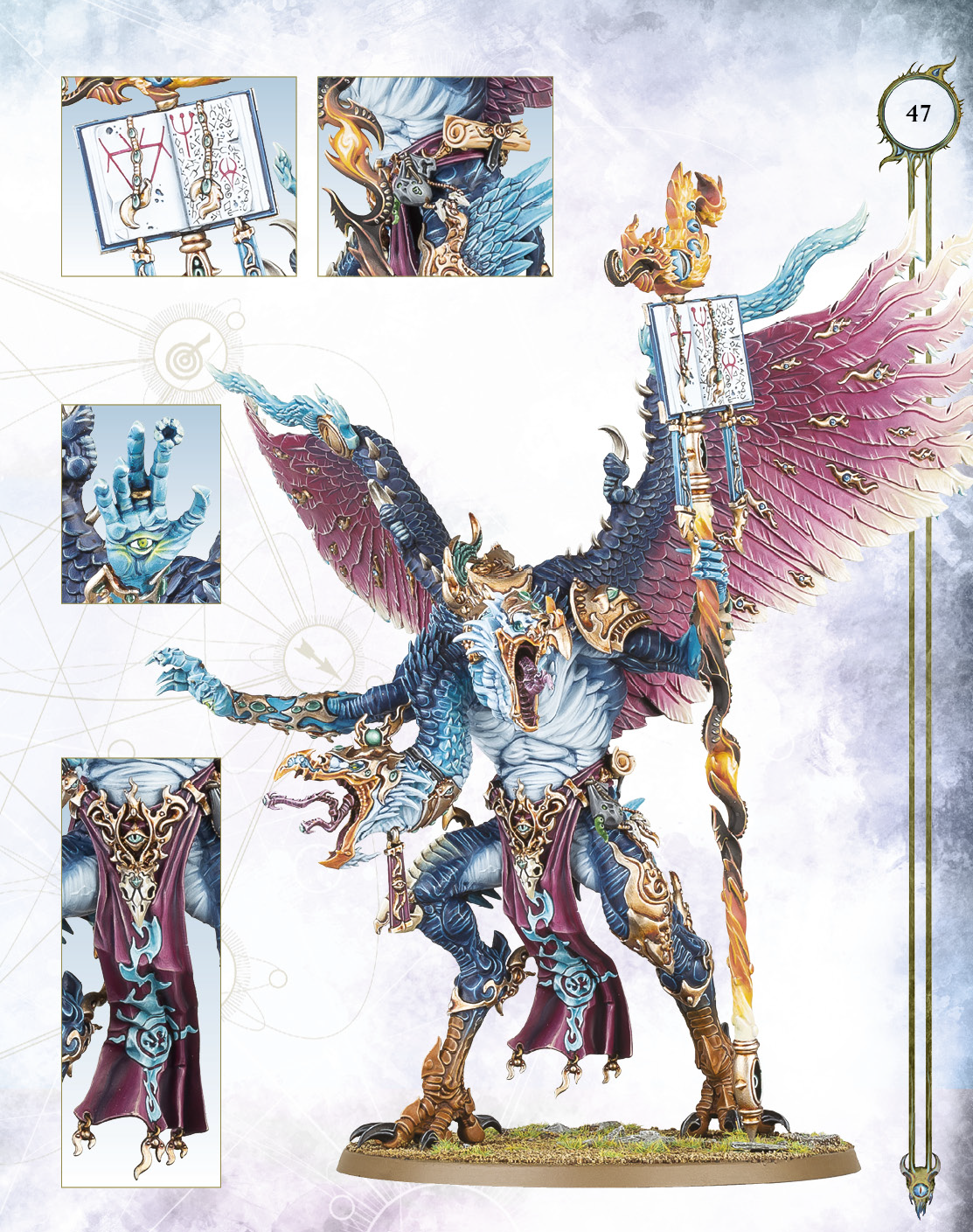 Since his lore has not changed here, and he should still have his major weakpoints, I am not a fan of bloating him up like Hulk, ready to smash.


TWW wise, while it would make sense to pick Kairos as a Greater Daemon LL, he certainly looks like a challenge. If Kairos might get the job in game#3, could be interesting what CA has cooked up for him. Having a huge monster which is basically useless in melee, might certainly need a different approach. I mean we had some "weak wizard" LLs already in the game which then were beefed up with monster mounts to compensate and hold their ground. A LoC will certainly not get a mount, so Kairos should not get rescued the same way. And if he just will get beefed up to be a fighting LoC and not as weak as he should be, it certainly takes away part of his background. But maybe, despite the allure of 4 starting Greater Daemon LLs, Kairos might not even get the job. We also have Amon 'Chakai around or CA could just promote their own Sarthorael to become the Big Bird sensation. 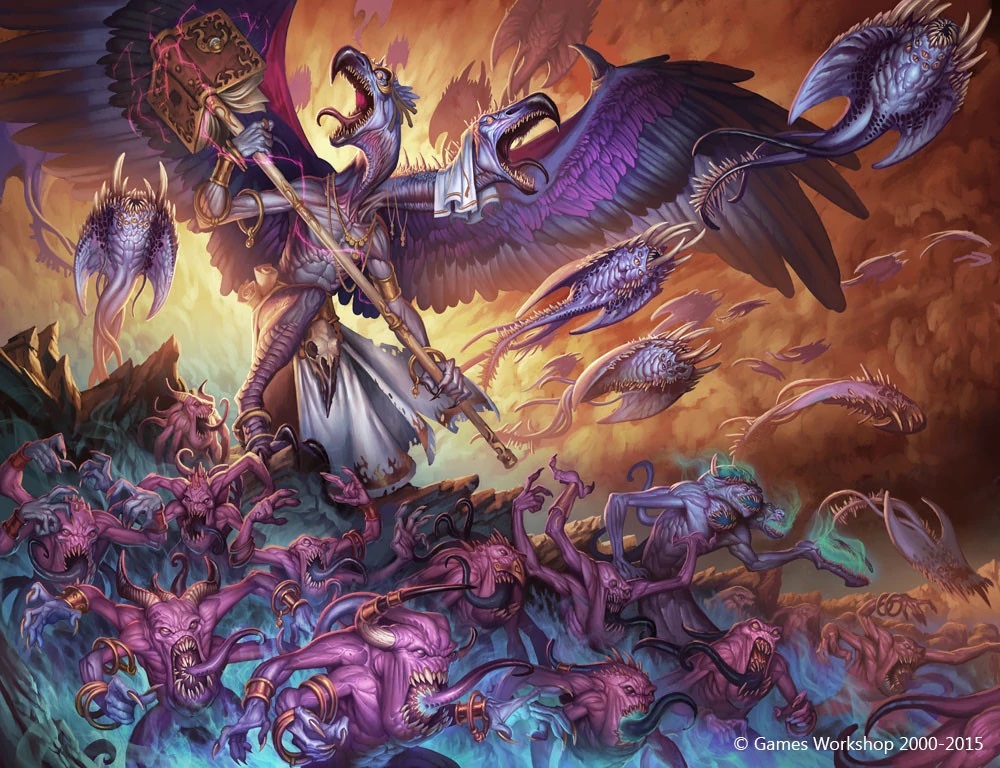