Wyvax Registered Users Posts: 5,114
June 22 in General Discussion
So over a month ago I made this thread regarding expanding the Warriors of Chaos: https://forums.totalwar.com/discussion/289355/expanding-the-warriors-of-chaos
Today I'll be making it's much delayed sequel since we seem to be in a bit of a news pause, as well as several different posts touching on this topic in the past week or so, which has reminded me to buckle down and finish up this post. So here goes, characters, units and ideas for Norscan expansions and FLCs. 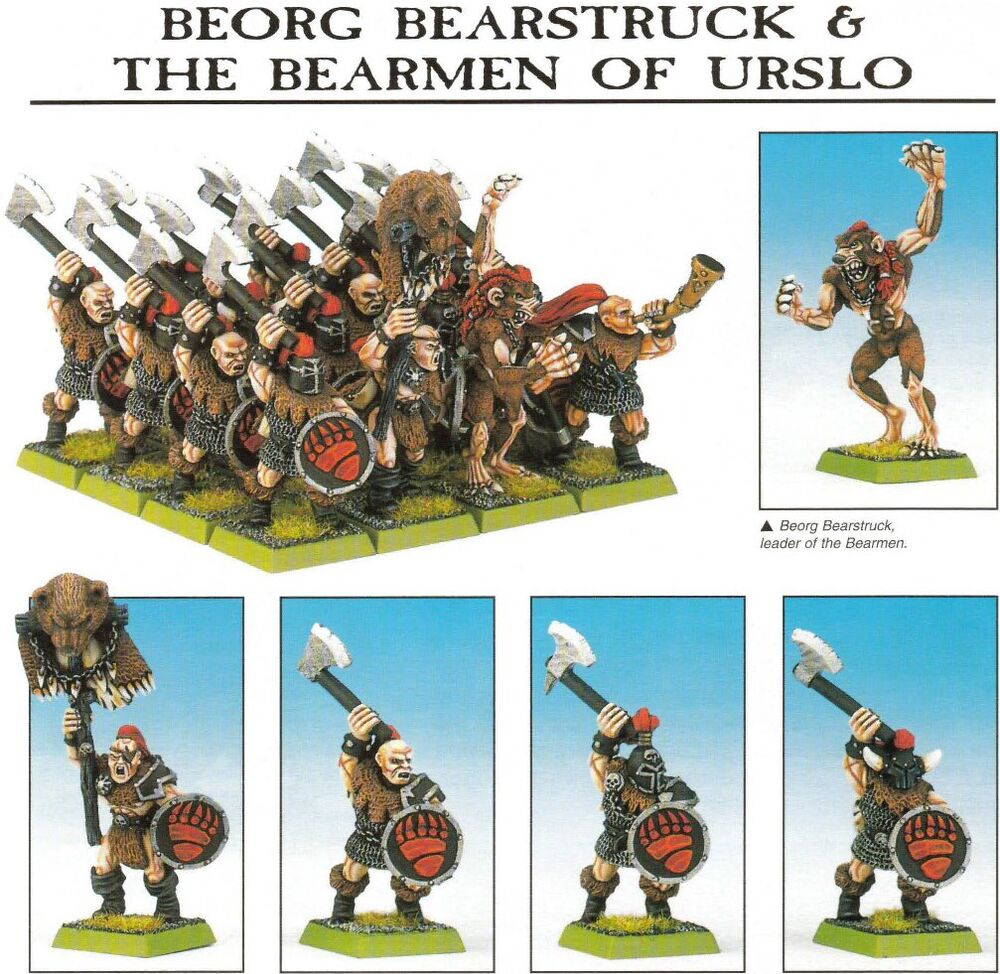 Probably the number one most championed LL candidate for Norsca, and not without good reason. Beorg Bearstruck has strong thematic ties to both the raiding and adventuring aspects of the race as well as the werekin tropes, though instead of merely being a werewolf, he's a full on werebear. With Kislev playing such a major role in WH3 and Tzar Boris presumed dead, the potential of a LP matchup between these to ursine themed characters is IMO too good for CA to pass up. Beorg acts as a nice middle ground between Wulfrik and Throgg, as he's both a monstrous character but still a proper Norscan warchief. In addition, Beorg is a tribal chieftain of the Baersonlings, meaning some of the more old school Norscan units would fit quite well in a LP with him. 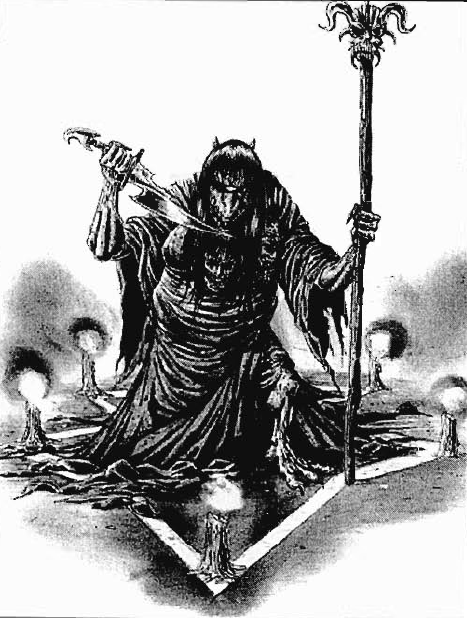 Another older character that has gained in popularity months. She originally hails from the older editions roleplay games, but is the only known named Fimir character in the setting. Despite this, being updated for modern TW Warhammer isn't an impossible feat. We already have characters that existed for far longer, (Kemmler), were left obsolete in the setting (Rakarth) or only existed in supplementary lore/games (Noctilus and Aranessa). While CA could create a completely new Fimir character, why not use the preexisting one and simply build off from there? Rakka has a unique item readily avaliabe in her Necklace of Shrunken Heads, a named capital of Grat Moshka (where exactly this is located is not known) and a unique design. She would fulfill the role of a caster LL and a fimir LL at once and could bring with her more units to flesh out the more monstrous side of the tribal Chaos worshippers, which I will expand about later. Ultimately I think she and her units are not LP material, however I believe a FLC on a level of quality similar to Drycha is perfect for her. There's even an easy faction name for her in the lore, the Fianna Fimm, which represents the warrior caste in Oldhammer lore and fimir society as a whole. 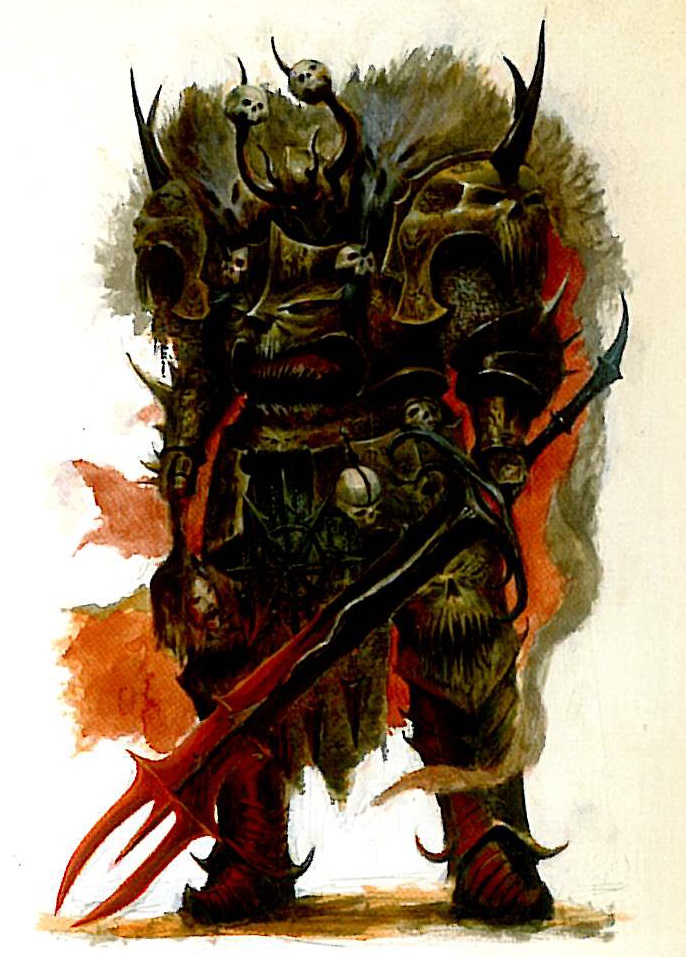 I've covered Lord Mortkin already in my "Expanding the Warriors of Chaos" thread, but I will cover him here too, as I believe he would work in either roster depending on how CA decided to implement him. On one hand he garnered the favor of the four, and could have become the next Everchosen, leading the Warriors of Chaos, Beastmen and daemonic hordes to crush the realms of men; on the other hand, he was motivated solely by a sense of familial and tribal honor, seeking only to avenge the death of his son rather than being a puppet of the dark gods. Although a baddie, this streak of virtue sets him apart from just about every other Chaos character in existence. If he becomes a Norscan character, his endgame could be structured differently where he not only rejects to aid Archaon but also to rejects supplanting him at well, putting him at odds with all other Chaos races for refusing to toe the party line.

My last suggestion is more of a personal pipedream really, but it's a particularly interesting concept that would go a great way towards enriching and diversifying the campaign in Norsca and the Old World as a whole. Just as the Wood Elves and Tomb Kings each have an evil character in Drycha and Arkhan respectively, I propose a good character to act as a foil for the rest of the Norscans. Ulricsson Haargald, the current leader of the Order of the Winter Throne, or Ragnarites as they are sometimes known. From the 2nd edition RPG, no art is available sadly. The Ragnarites are a somewhat extremist branch of Ulricans who are found in the most northern regions of the Empire, Kislev and Southern Norsca. They refer to Ulric as the Snow King and teach a philosophy of harsh ascetism and self reliance. Winter is a training ground for 'Evernacht' the coming eternal winter that will eventually strangle the life out of the followers of chaos. Ulricsson Haargald is an old and massive Norscan, who rarely speaks and consumes only snow, leading his followers from his seat of power in Norsca. An order aligned Norscan faction would make a fine ally to Nakai, the Empire and Kislev and greatly enrich the early campaign of Norscan factions, during the wars to dominate the peninsula. My suggestion would be to make them a hybrid faction, losing access to the clearly corrupted Chaos units in the Norscan roster, such as Trolls, Fimir, Frost Wyrms and Warshrines, replace the Chaos motifs on Marauder units, have Skinwolves renamed and reskinned to Children of Ulric, and gain access to a limited selection of Empire units such as Knights, Halberdiers, Mortars and the Ulrican units coming alongside Emil Valgeir in the eventual Middenland LP. How to implement him? Make him a ME only FLC that requires both the Middenland LP and the Norsca race pack, similar to Drycha, intertwine his and the Ar-Ulric's campaigns, and release Boris Todbringer alongside as a normal FLC that everyone has access to since he's already half implemented anyway. Again this is a pipedream of mine, but IMO it's a worthy shakeup to the campaign and would add immensely to the game without requiring to much to budget to implement.

Alright that's it for LL suggestions, now let's get into generic characters, starting with lords. 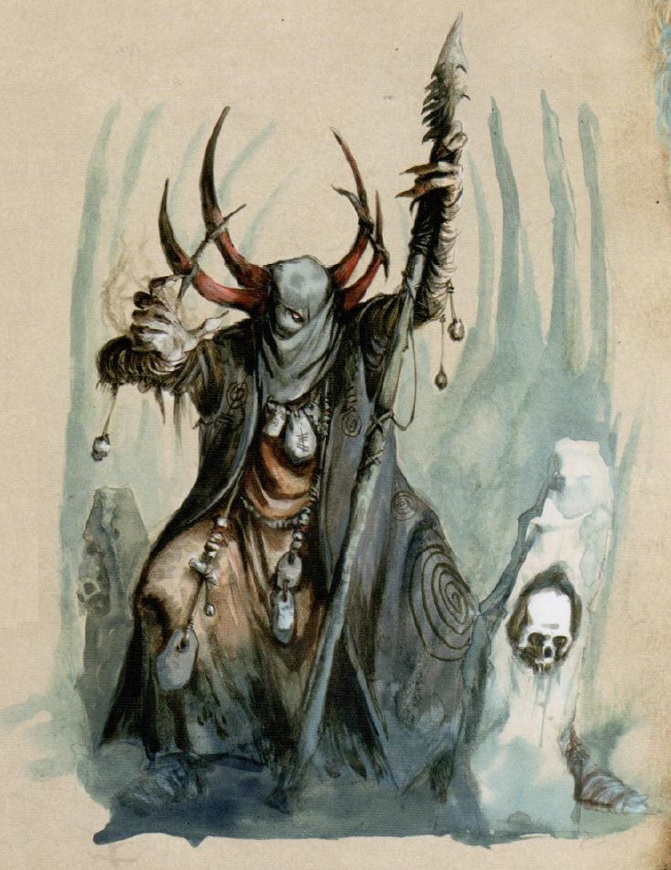 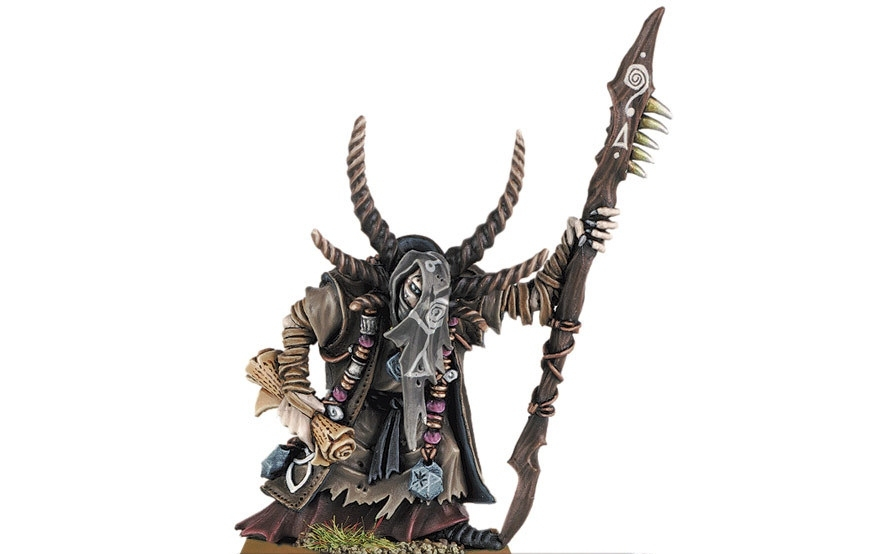 It's no small matter that Norsca has no caster lords available. Instead of making a simple lord tier equivalent of the Shaman-Sorceror, I propose the Dark Emissary as a generic caster instead. While they originally hail from the land of Albion, Dark Emissaries are former Truthsayers corrupted by the teachings of Be'lakor himself, and roam the world seeking to enact the will of the Dark Master, offering their services to various wicked races in evil pacts. Given their tribal origins and the fact that Albion as a race is incredibly unlikely to ever come, I suggest Norsca as the best roster to place them in. They can use the lores of Shadow and Death as well as their own unique lore which will likely only be available to them and Be'lakor himself in WH3.

My second suggestion is a lord tier equivalent of the Skinwolf Werekin, similar to the dynamic seen between the Herald of Khorne/Bloodreaper or the Doombull/Gorebull. I'd suggest Ulfwerener as the title, a name taken from older lore to refer to what we now call skinwolves. Would fit remarkably well alongside Beorg Bearstruck as a generic lord type, as making a generic werebear lord is probably to much to ask for. 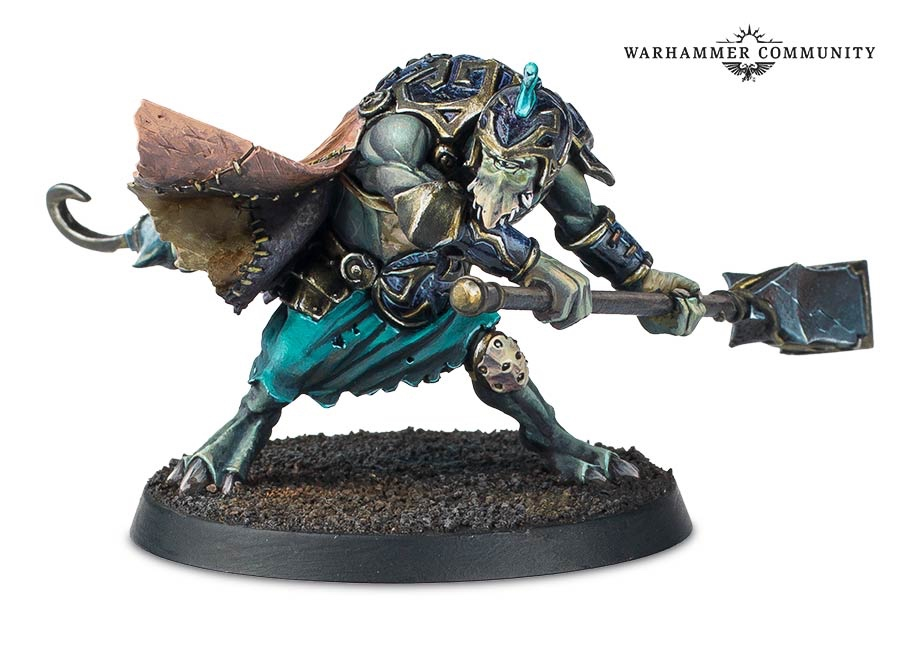 The Fimirach Noble is taken from the unit champion of the Fimir with Greatweapons on the TT. Providing an all purpose monstrous melee beatstick lord type for Throgg and Rakka if she ever arrives. An incredibly easy to create unit for CA. 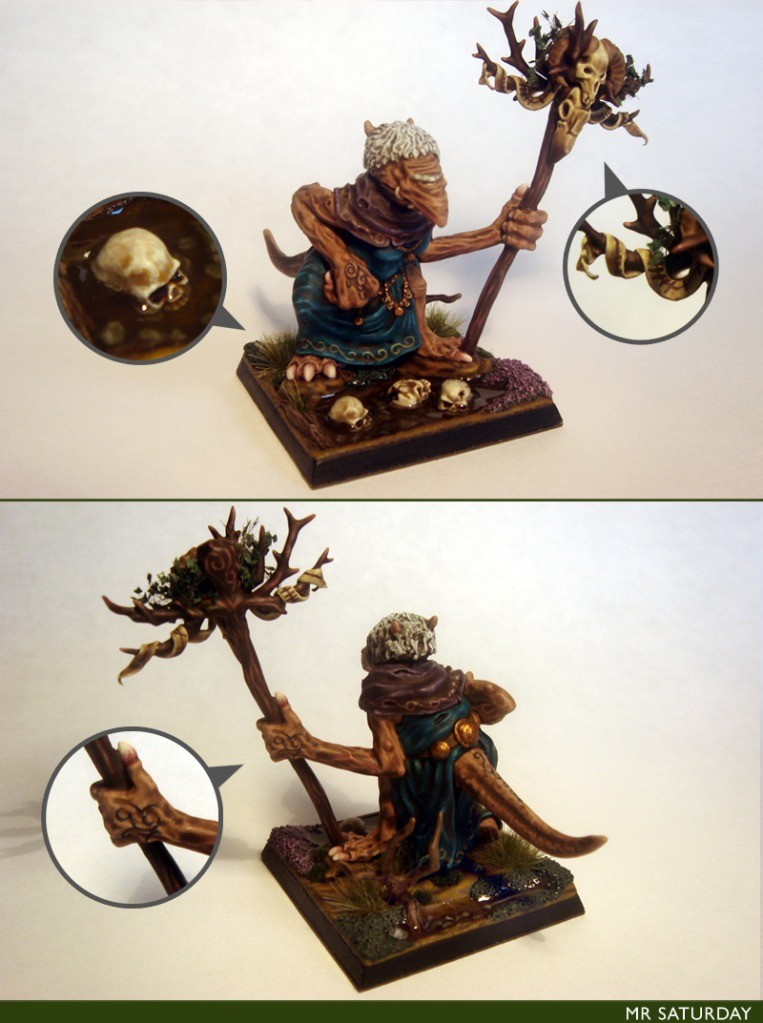 The Fimir Meargh is the leader of each fimir tribe, the only females of their kind but incredibly potent in magic. Could be an exclusive lord type for Rakka similar to Drychas Malevolent Treemen.

Now onto new hero types, of which I only have one that's really worth considering IMO. 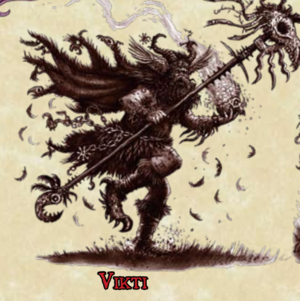 The Vikti (or Vitki, some conflicting information on the spelling) are from the older lore of Norsca, what makes them unique from the current Shaman-Sorcerors is that they utilize the Lore of Life in battle, acting as tribal healers. A life mage for an evil race is so far unknown in game, and perhaps might be OP with mammoths, but if we can have them with dinosaurs and dragons I don't see why not. 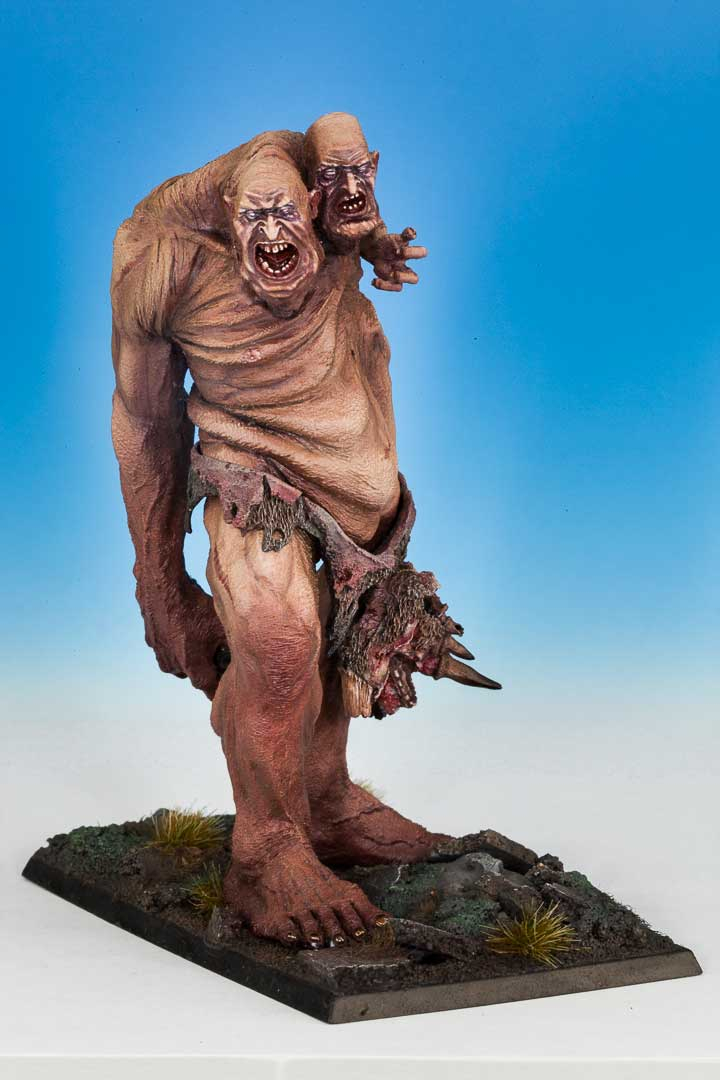 Starting off strong with the Curs'd Ettin. These horrific beings are not simple giant variants, but rather the twisted descendants of a tribe of cursed Norsemen, blessed with wicked intelligence and gifted with baleful magic, with some even capable of regenerating. With the possibilities of auras to affect enemies as well as bound spells, the Curs'd Ettins would make an excellent utility monster for the Norscans. 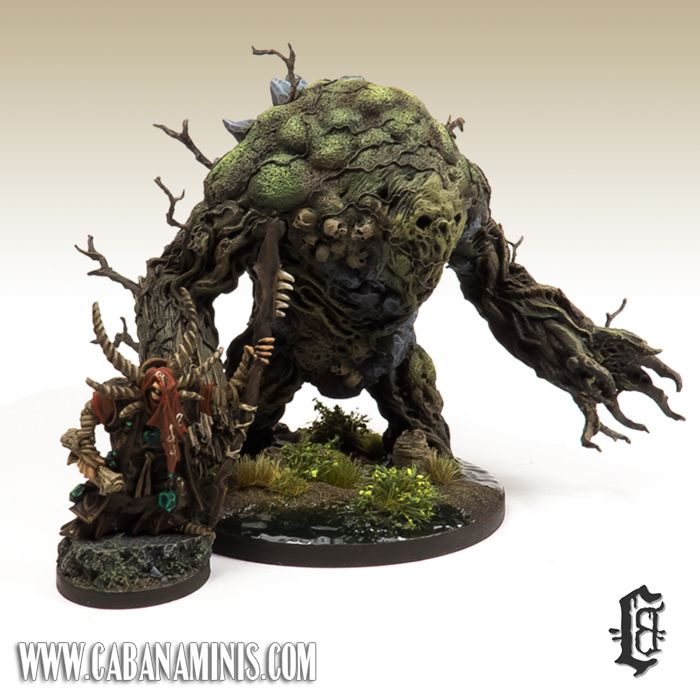 You can't have Dark Emissaries without Fenbeasts of course. These monsters are magical constructs created from a mixture of dead remains and the detritus of bog vegetation and mud. Mindless and fearless entities that are incredibly difficult to put down once on the battlefield. 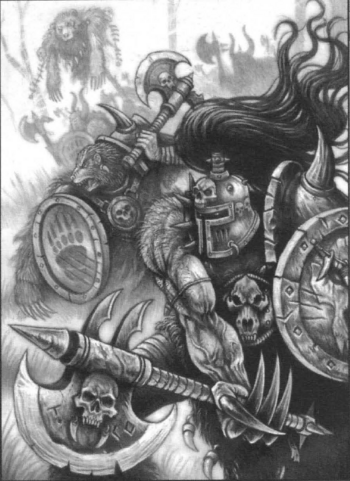 While the Bearmen of Urslo are a regiment of renown of the Dogs of War, they under their leader provide fodder to be far more than just a RoR of Marauders. Beorg is not the only were-bear in existence, just the greatest known. Reworking the concept into a new tier 5 monstrous infantry (and accompanying building) beyond Armored Skinwolves could provide them with an invaluable new tool. My proposal would be to greatly buff their health while lowering their speed in comparison to Skinwolves, having no dedicated anti-infantry or cavalry focus but instead getting the Berserk rule. 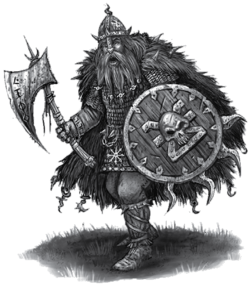 Norscan Huscarls are my proposition for an elite bodyguard unit that exceeds the normal Marauder Champions in armor value, MD, leadership and tankiness, but is less offensive overall, while possessing the Guardian rule. The concept is from the older Norscan lore, but would fit in quite well in a LP alongside a tribal Chieftain like Beorg or Lord Mortkin. 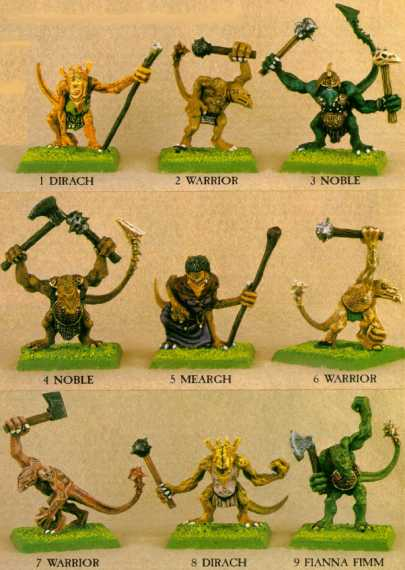 In this image are multiple Oldhammer Fimir models, including that of the Fimir Meargh shown off earlier. The lesser armored, less impressive looking ones represent the lower, slave caste in fimir society, known as Shearls. Shearls are slightly smaller, weaker fimir, with far less impressive tail ornamentation that make up the laborers and rank and file of their warbands. They are an incredibly easy to create remodel and as such could easily come as an exclusive to Rakka in a FLC, representing early access to fimir units before accessing the elite fimir warriors.

Boglars! Aquatic gnoblars that are said to be in league with the Fimir tribes of the Marshes of Madness. These are easy-bake gnoblar retextures as another Rakka FLC exclusive unit. These goblinoids are the perfect meatshield to pair up alongside fimir working similarly to the dynamic between Skinks and Kroxigors. There's even an elite version called Toad-gnoblars, which are basically Gremlin expys, they multiply when coming into contact with water.

So that's my big list of LLs, characters, units and hybrid factions to expand Norsca. I'm sure I've missed several ideas and suggestions, so please feel free to contribute to this post with your own suggestions. Of note, I deliberately omitted Sayl the Faithless as he's the only caster LL of note that would fit for the Warriors of Chaos now that monogods are a thing, and with his clear association with Chaos Spawn, he definitely works better in the WoC for that reason, I cover him in the link at the top of this post. Flayerkin to I omitted as I felt they were somewhat redundant with Berserkers being a thing in the roster already.
Tomes read: The Great Betrayal, Master of Dragons, Curse of the Phoenix Crown, Trollslayer, Skavenslayer, Daemonslayer, Dragonslayer, Beastslayer, Vampireslayer, Malekith, The Bloody Handed, Shadow King
Me when I see a LL character implemented as a LH.