Since there is no LM rework, help me hash out the WH3 LM final DLC

TheWattman Junior MemberRegistered Users Posts: 733
July 3 in General Discussion
After starring in 3 DLCs, the Lizardmen have yet to recieve a touch-up on their rather lackluster general mechanics, nor has Nakai been reworked to a more viable state of play. Therefore, the Lizardmen should and must get a rework in WH3 eventually. What that update should contain unit-wise is perhaps somewhat straightforward, but its another matter entirely of which race they should face in that update. Here is the basic outline: 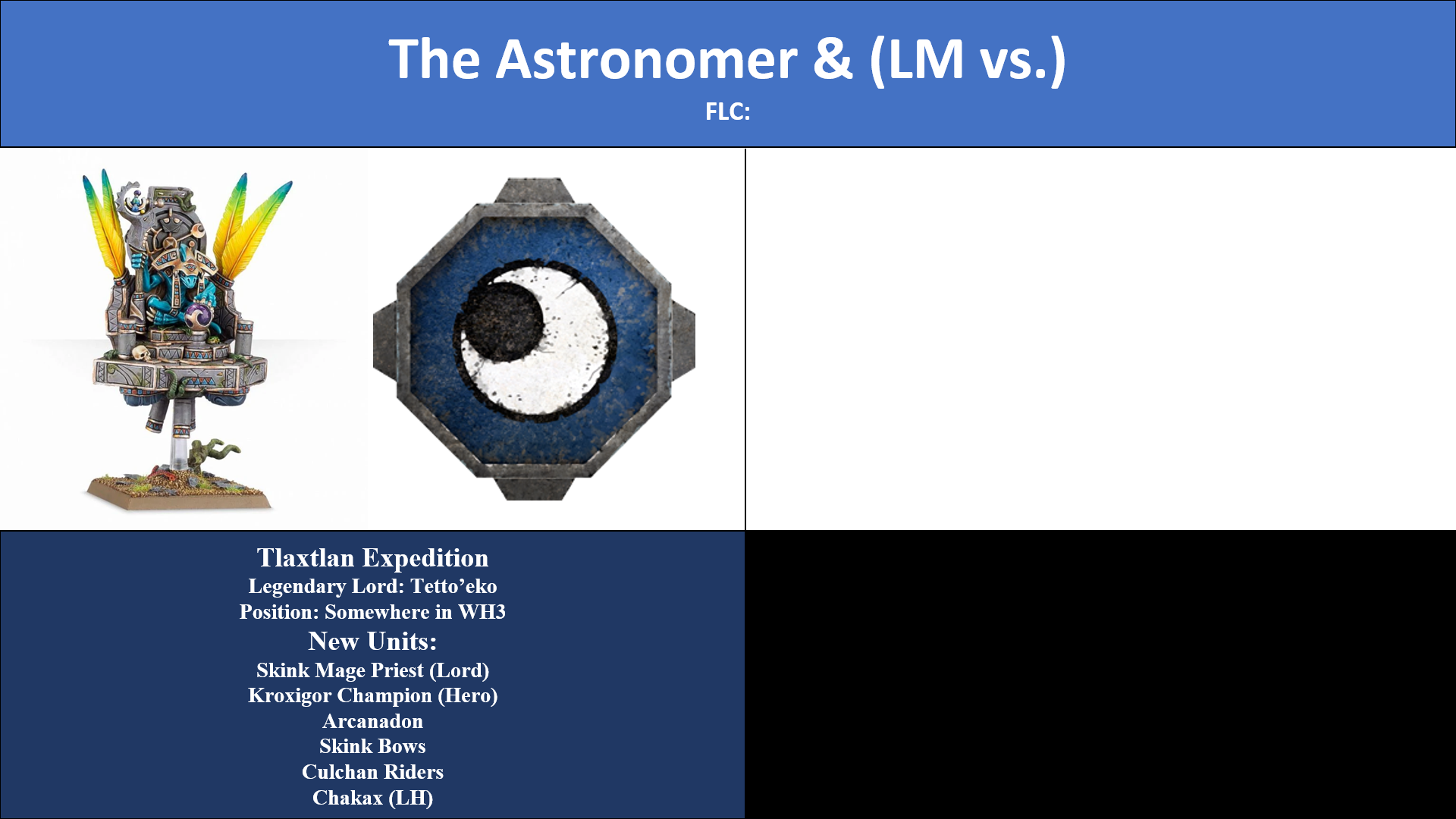 The remaining Lord candidate in the Lizardmen roster is Tetto'eko, even though it was Oxyotl who had the clear lore connection with the eastern parts in Khuresh. But now its Tetto'eko's job to lead the Lizardmen in their last hurrah in the trilogy and face... someone, likely a lord from the Monogods. With him should march Chakax, the great Temple Guard from neighboring Xlanhuapec and thereby completing the list of LM named characters in 8th edition. Now, for the units, even with the coming of the Troglodon and the Coatl with this "update", there are still very much viable units left to be potentially added in. Skink Culchan Riders would bring some fast light/skirmish cavalry to a race that still doesn't have that in its arsenal. Skink Bows, likely with poison arrows, would then add some longer ranged skirmish power, probably 140 to 180 somewhere, to the Lizardmen infantry, depending on the range of the coming Stalkers of course. Alternatively, for the infantry there could be Skink Braves, more high-tier oriented Skink infantry on par with their Saurus cousins. As for the centrepiece, there is only one option left, the Arcanadon from 6th edition, carrying a different variant of the Engine of the Gods which functions as a stone thrower, which would add some much needed firepower to the LM roster when it comes to siege battles. For Lords and Heroes, a Skink Mage Priest, a generic Tetto'eko, would bring back the Lore of Heavens to the lord categories and there could potentially also be some sort of Kroxigor champion, just to have hero-level Kroxigor.

But who would Tetto'eko face? His own lore mainly focuses on battling the Skaven and countering their schemes, but LM-Skaven rivalry was taken care of with Prophet & Warlock. And if the core-rule still applies, then the options for rivalries would either be the Monogods or Cathay, since LM vs Kislev makes absolutely no sense. For Cathay, there are the voyages of Yin-Tuan to draw upon. But most likely are probably the Monogods, but which one of them? Maybe we should look to some of the falls of specific cities in the Great Catastrophe?

What do you think guys? Do you agree with this content and who should the Lizardmen face in WH3?
Tagged:
Flag 10 · 5Disagree 10Agree
«12»