The Future of Bretonnia with DLC

Cosmic_Lich Registered Users Posts: 511
July 2021 edited March 27 in General Discussion
When people bring up the idea of a Bretonnian DLC there is consistently a portion of the responses talking about how Bretonnia is FLC and should always stay FLC. I've made and remade the following arguments and will probably come back and edit them with improvements if I think of any. I hope I can convince these people that Bretonnia can, should, and will get a paid DLC expansion.
TLDR at the bottom.

Stop thinking of Bretonnia as the 'FLC faction.'

As with the nature of what FLC actually is, it is a content update that needs whatever DLC or Base game to actually use it. For example, Vlad and Isabella are not free. They were a free addition to the VCounts after launch, but being FLC doesn't matter if you don't buy the first game. The same logic applies with any of the base factions of the first game. As it stands now, Vlad and Isabella are base characters for Warhammer 1.

With the release of Thorek Ironbrow, Dwarfs are now the same exact position as Bretonnia. To play them you just need either base game. I doubt anyone will be brave enough to tell the Dwarf players they shouldn't have any hopes for more DLC content now that they're FLC now.

Bretonnia was a content update for W1. Yet owning W2 now comes with Repanse. This puts Bretonnia in a unique position compared to the rest of the factions. It has become a base faction for both Warhammer 1 & 2. As a result, there is a sect of the community that considers Bretonnia the FLC faction that should stay FLC. That's all they've ever been and that's all they ever will be. Yet as I point out being FLC just makes you part of the base content. Being "FLC" according to CA is just to show new players that the game does have content updates and that Total War is not the type of game with hundreds of different paid DLCs. The Bray Shaman lord is FLC exclusively for people who own the Beastmen race pack and/or the Silence and the Fury lord pack. Being FLC matters only to the people who own either DLC. The same logic applies to Repanse and the other Bretonnian lords who only matter to the owners of the first two games. Some may scoff at this now, but this applies to new players in Warhammer 3 who might not have the first 2 games.

The truth of the matter is that nothing is stopping CA from making a Bretonnian paid DLC save for the lack of Bretonnian content to implement and GW's permission. Calling them the 'FLC faction' is a crutch for... Well, I'm not really sure. They were FLC so they can't get a paid DLC expansion, because of reasons????

These people usually argue that FLC should stay FLC so people can get free content rather than always having to pay for everything. It would leave the player base unhappy to charge players for something that has always been free. Were I to be uncharitable I would say that some of these arguments are by people who don't care about Bretonnia and would rather have Dev time and budget go to other factions. Were I to be charitable to these arguments then I would say that some people genuinely believe that there should be some aspect of new content that should be free to ease the minds of player's wallets. To them Bretonnia as a whole is a convenient candidate. To them I would say that FLC exists for all factions. A new unit, a new LL, a new generic Lord type can be created for any faction that desperately needs a touch up like the Dwarves with Thorek or the Beastmen with with the Bray Shamen Lord. Bretonnia should not be shackled by an idea of always being free. If there is content to expand on in the size of a DLC then it should be exciting to pay for it rather than a single lord just to play the same faction in a different place.

DLC always brings in more content than FLC. The only exception was Bretonnia's initial race launch. This doesn't matter because they were half complete at launch. People were mad when Warriors of Chaos were a preorder bonus and called it "cut content." Bretonnia may have been meant to be an at-launch base faction, but were probably left incomplete due to budgetary restraints and/or time limitations. Nowadays people speculate what lords and units will be added to the Warriors of Chaos roster, but Bretonnia still suffers the sentiment of being the FLC faction. I challenge anyone to justify this.

Whatever line of reasoning, these people argue that CA can't, shouldn't, or won't make a paid DLC expansion for FLC. To that I say, people thought DLC for DLC wasn't going to happen. Yet Wood Elves and Beastmen exist to disprove that. [See meme below] If CA can put together a DLC full of units for Bretonnia then they will. Bretonnia, like any other faction, has room to grow. 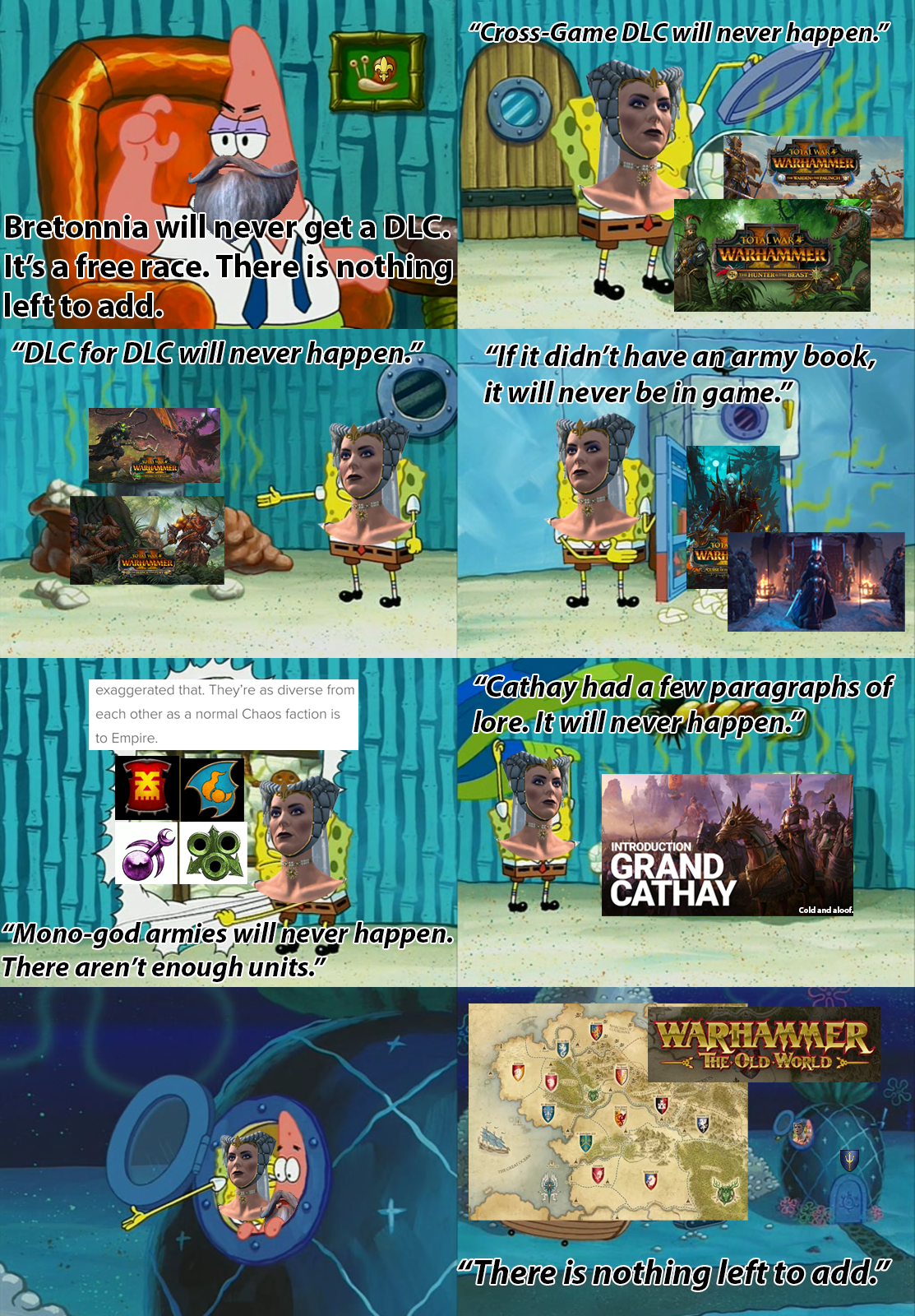 Bretonnia getting more cavalry variety should be welcomed.

Some people point out that Bretonnia is complete with nothing left to add. Not only that, but CA EXPANDED on Bretonnia beyond what they had available on table top. I don't care what was on table top. Bretonnia hadn't gotten a new armybook since 6th edition. No on complained when HElves got Rangers and Silverin Guard. Bretonnia, more than most, is desperate for an update in Lore and army.

If we want to pad out the roster with loreful and logical additions, like the Rangers and Silverin Guard, then it could be possible with sword and board weapon variants for Squires and Knights Errant. Even so, units can be taken from the lore or invented if needs be. I now present to you a list of options for Bretonnia that are fully within theme, playstyle, and lore. Bretonnia has a lot of potential for new, exciting, and thematic units that would add to the playstyle, not take away from it. Even Herrimaults could be added as a semi-elite variant or ROR of the peasant archers. The fact is that expansion is possible. Giant Snails could act as mini-fortresses with peasant archers on top. I had a talk with a buddy who was around during Oldhammer and he convinced me the idea isn't so bad.

Below is the concept art mentioned with the Questing Beasts. Before you ask I have no idea what those wagon things and flying ships are about, and would greatly appreciate any info on them.

Bretonnia will have its day, just not soon.

The truth is that CA doesn't have a lot to work with to make new units. Everything I described previously were just semi-obscure references in the lore and old concept art. Even if CA wanted to add these to the game they would need GW's permission. The fortunate reality of Bretonnia's state is that they will get a well crafted DLC, but it will probably happen later during TW:Warhammer 3's lifespan. [At the time of this edit] There are rumors about Bretonnia's army almost being finished for the "Old World" setting. This means that Bretonnia may get its DLC sooner than I originally anticipated. Especially considering that Bretonnia was one of the first factions shown in that lore update a few months back. CA worked with GW to make Kislev and they, to my knowledge, didn't even have a fully fledged armybook on the table top. Bretonnia could get the same treatment, but we just don't know when that will happen. If there is ample interest in Bretonnian content then GW and CA will notice. Only then will they decide to create content.

Thinking of Bretonnia as the FLC that therefore can't/shouldn't/won't get a paid DLC expansion is pointless. CA can do as they please if they have something to sell and being FLC doesn't matter. Some would say that Bretonnia has nothing left to add other than characters, but, despite tabletop, Bretonnia does have options in the lore that would add to Bretonnia's playstyle and theme. With GW working on "The Old World," Bretonnia will have its day. It's just a matter of time. All we Bretonnian fans can do now is show interest by playing the faction, making mods, talking and speculating on the various forums, and unironically making memes like this one.

And now a meme of my own design:

Edits: Added to some sentences to better my arguments throughout the post. Updated the "Bretonnia will have its day, just not soon" section to mention of recent rumors of Bretonnia.
More Edits: Changed my stance on Giant Snails. Yes I know I said never. I also added a bit more about Dwarfs being as FLC as Bretonnia.
Even More Edits: Added another meme and fixed up some grammar.
⚜ Ze future of Bretonnian DLC and ze Old World. ⚜