TheWattman Junior MemberRegistered Users Posts: 1,432
October 2021 in General Discussion
The introduction of Cataclysm Spells in the Realms of Chaos got me thinking how such spells would be implemented if we looked further into the Storm of Magic supplement to look at race-specific ones, of which there are quite a few. Obviously such spells would have specific requirements of availability, such as specific battlefield-conditions and such. Certainly they would probably only be available once per battle. Lets look here at the spell segments of Bretonnia, the Wood Elves and Lizardmen: 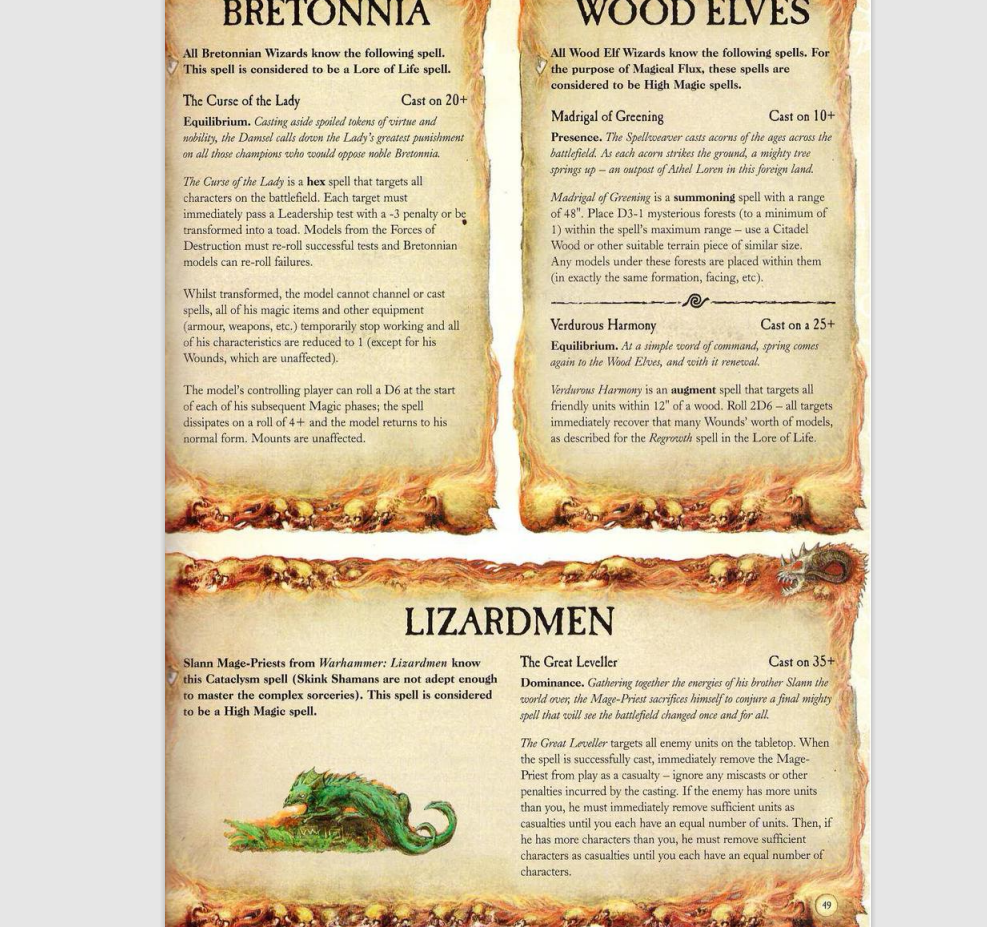 Lets start with Bretonnia:
Curse of the Lady - From what I can gather here, in the absence of true transformation spells in the game, I would say that this could work as a strong Lord/Hero sniper. Imagine pinning any enemy lords and heroes in place, just like Net of Amyntok, but in addition it also strips them of any buffs they give to their army, the capacity for spellcasting/popping new abilities and also a significant reduction in their own stats. This would then be the perfect oppertunity to pounce on those characters with your own. I imagine this would work as a one-time use ability for the Bretonnian Damsels and their hero casters.

Lizardmen:
The Great Leveller - Pretty straight forward this one, its a sacrifice of your Slann in exchange for the extinction of some of your opponents units. So imagine you are countering a couple of Chaos armies with a single Lizardmen one and depending on how many units your opponent has, the more you get to delete by sacrificing your Slann. For example, if your opponent has 30 units, you can delete 5 or 10 (what's more balanced?). If they have 40 units, delete 15 or 20 (balance?). Something that doesn't allow LM to delete similarly sized armies atleast.

Wood Elves:
The Wood Elves have 2 options to choose from and they are both passive spells. Either you summon a forest, which Im certain is pretty impossible as it stands in the game, or you get a large heal boost for a bunch of units. Basically a more powerful Regrowth.

What do you think guys, would these be viable in-game mechanics and spells?
Tagged:
Flag 3 · Disagree 3Agree