The second post in my series of hypothetical expansions per certain Warhammer races. This one will have a heavy emphasis on forest goblins and big squigs. But plenty of orc presentation too, especially in the LL department!

New LLs
There are six here just because I wanted to cover all potential candidates. 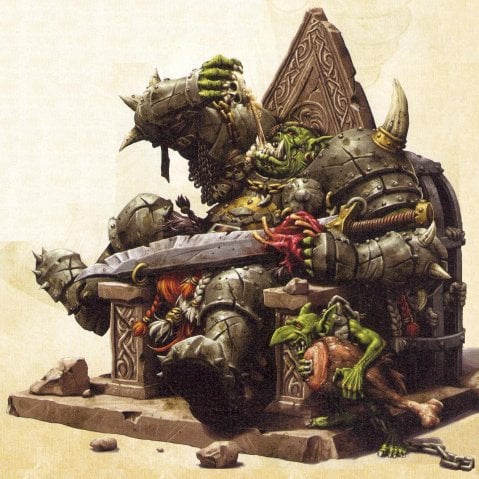 The Squatter King of Black Crag. Incredibly intelligent and shrewd for an orc, what's more impressive is that he's not a black orc but a regular one yet he's absolutely massive and still wickedly sharp. He dominates the Badlands and the routes through them, and has a feud with King Kazador of Karak Azul. It's time for Grimgor to go back to the Blasted Wastes so Gorfang can shine as a true LL! (Plus our Best Boy would be able to start in a more loreful location anyway!) 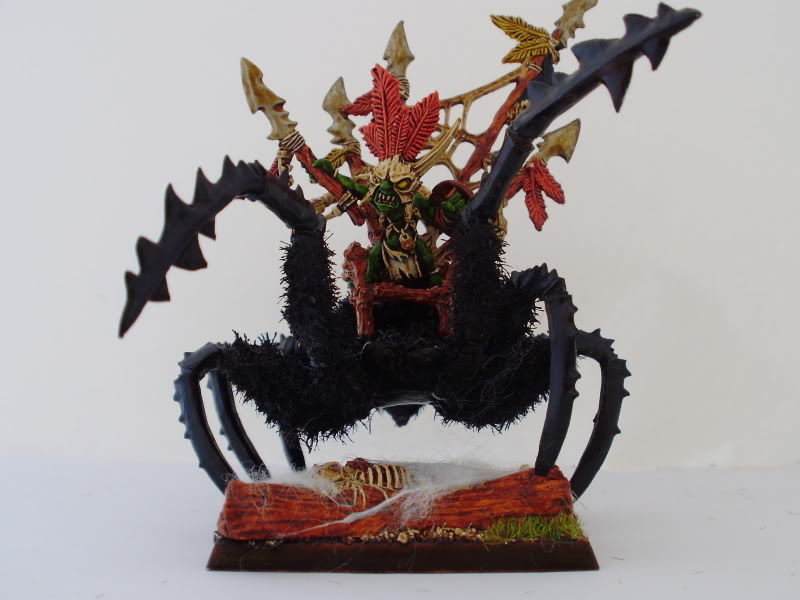 Surviving Chieftain of the Redvenom Tribe, inhabits the Black Pit and wages constant guerilla war on the Men of the Empire as well as the Beastmen of the Drakwald and elves of Laraullorn Forest; would give us a really interesting greenskin campaign in a very different biome. Rides a gigantic spider into battle as a monstrous mount. 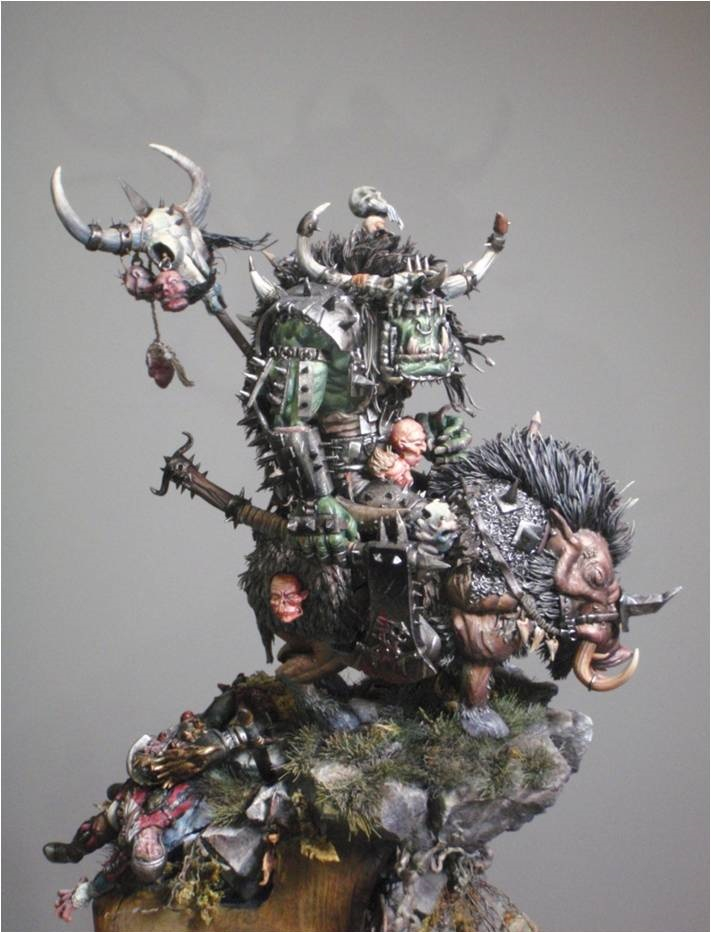 (The model was released just before WFB was destroyed by the ET, it's an updated version of his old 4th-5th edition version).
Morglum Necksnapper is a fearsome Black Orc Warboss who rides into battle with twin axes atop his ferocious boar mount. In many ways he is like the modern day incarnation of the famous Gorbad Ironclaw of a millennium ago, having fought and defeated an Errantry War of the Bretonnians at Black Fire Pass and terrorizing the Border Princes, and Dwarf Holds of the Badlands. He could also be moved over into the Mountains of Morne to provide a Greenskin rivalry and campaign near the Ogre Kingdoms.
"Let 'em tell da King. Da east belongs to da Orcs. Da east belongs to Morglum. Da east is green." 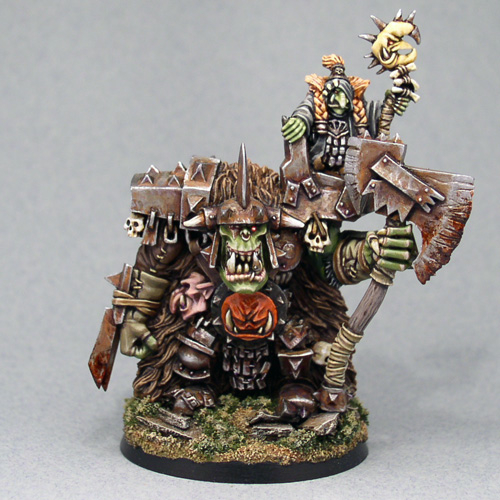 This dynamic duo originated in Warhammer: Age of Reckoning and had a cross promotional model on the TT. Grumlok and Gazbag are individually fierce Black Orc Warboss and Goblin Great Shaman leading the Bloody Sunz Tribe, but together these two buddies are a truly formidable duo of might and magic. Notable for the influence Malekith held over them to weaken the dwarfs. Would also finally provide us with a LL with access to the Lore of the Little WAAAGH!!! 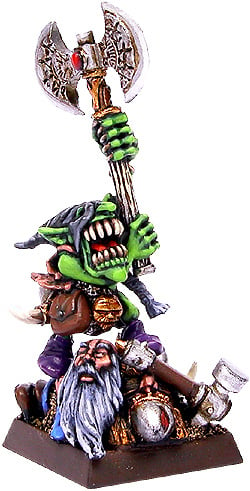 The Black Gobbo is the ever present thorn in the side of Grombrindal, the White Dwarf. The Jerry to his Tom, the Roadrunner to his Wile E. Coyote. He's the most despicable and slippery of all goblin kind, earning him respect from even the nastiest of skulkers. Notorious for luring dwarfs into traps and looting their gear afterwards, as a result all of his special equipment is directly lifted from the dwarfs himself. He's an absolute nutter that wields an axe far to large for himself in combat. 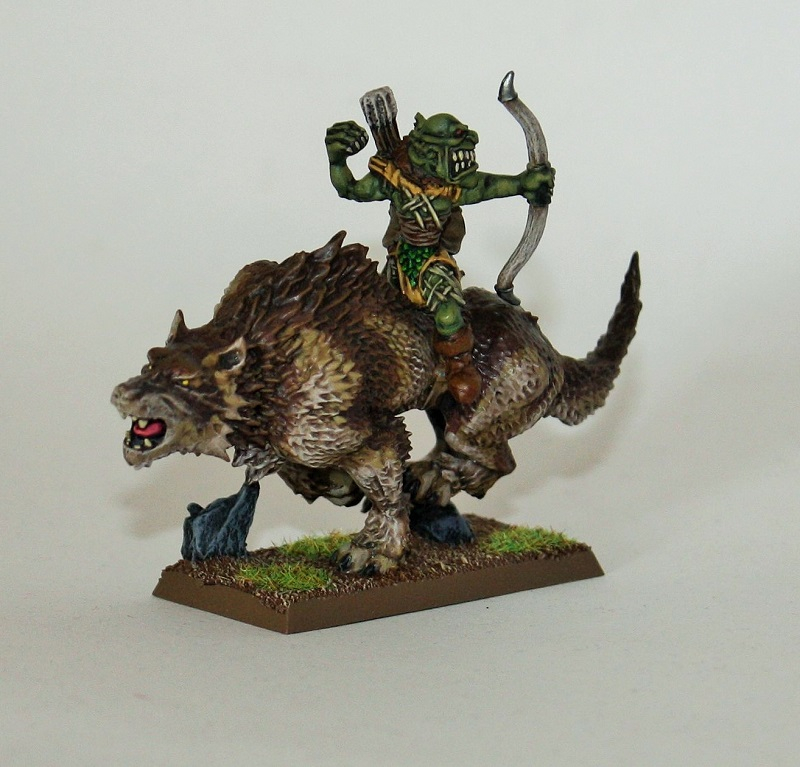 A much reknowned and feared Goblin Big Boss hailing from the Wolflands. Gitilla has served with many an orc tribe as a mercenary of war and leader of scouts. He rides a massive she-wolf called Ulda and fights with a bow. He could function quite well as a LH in addition to a LL.

New Lords:
(Note, due to all of the permutations of greenskin culture, I'm trying to cover all bases, but at some point it get's silly to have so many lord and hero types, that are nearly functionally identical. So some omissions will be present, though not at random.) 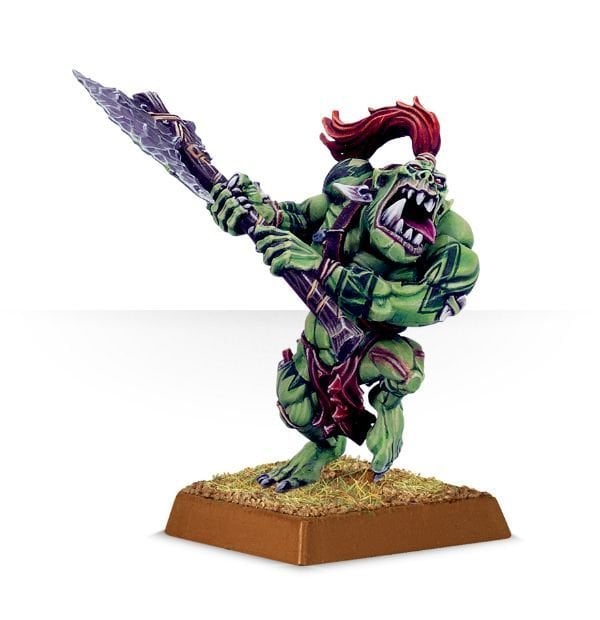 The savage counterpart to the regular Orc Warboss, with a great weapon and no shield, it would make a fantastic anti-large leader. Can get a War Boar mount. 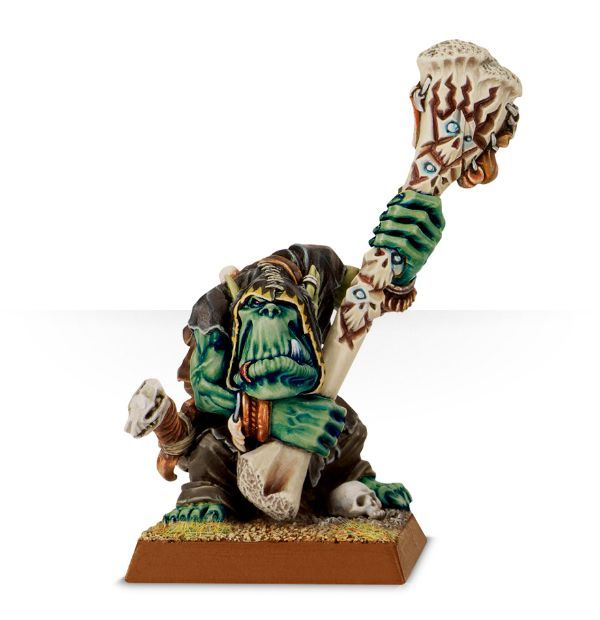 Quite bizarre that we don't have it already really. Generic lord tier caster, with a visual style that could fit in with both savage and regular orc armies, just like the hero version. Can get a boar, chariot or Wyvern mount. 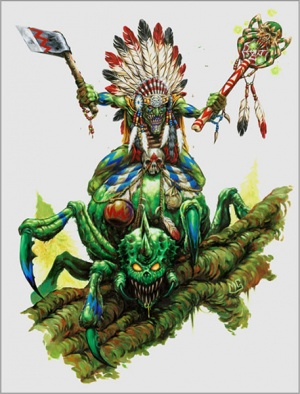 A completely new lord type for the Greenskins, armed with a bow and functioning as a ranged and melee hybrid lord. Would get a gigantic spider as a mount. 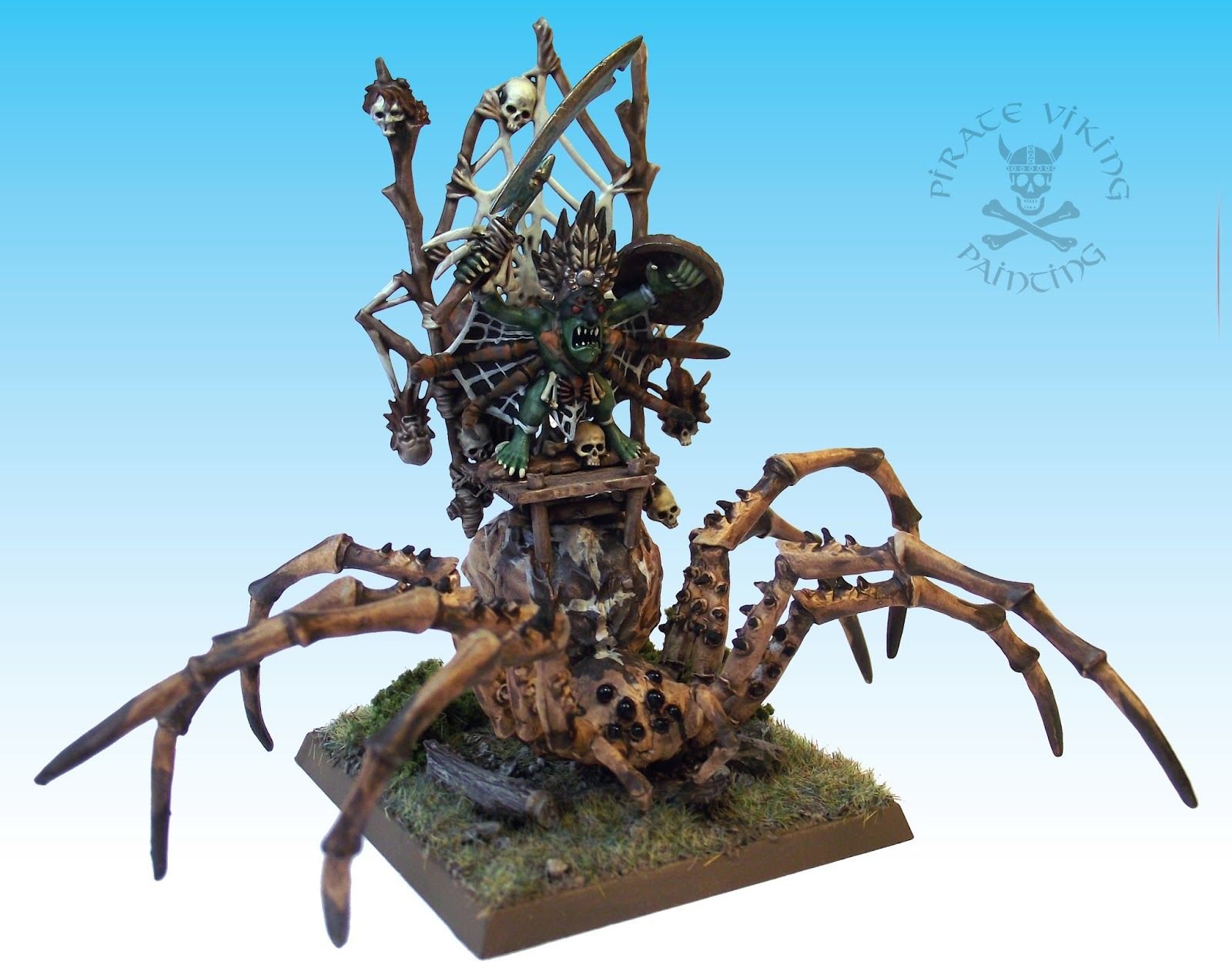 This is basically like the Eshin Sorceror. A unique new mage hero bringing a new lore of magic, this time the Lore of the Spiders, something that exists in a rather primitive form in the TT and lore but could be expanded upon. 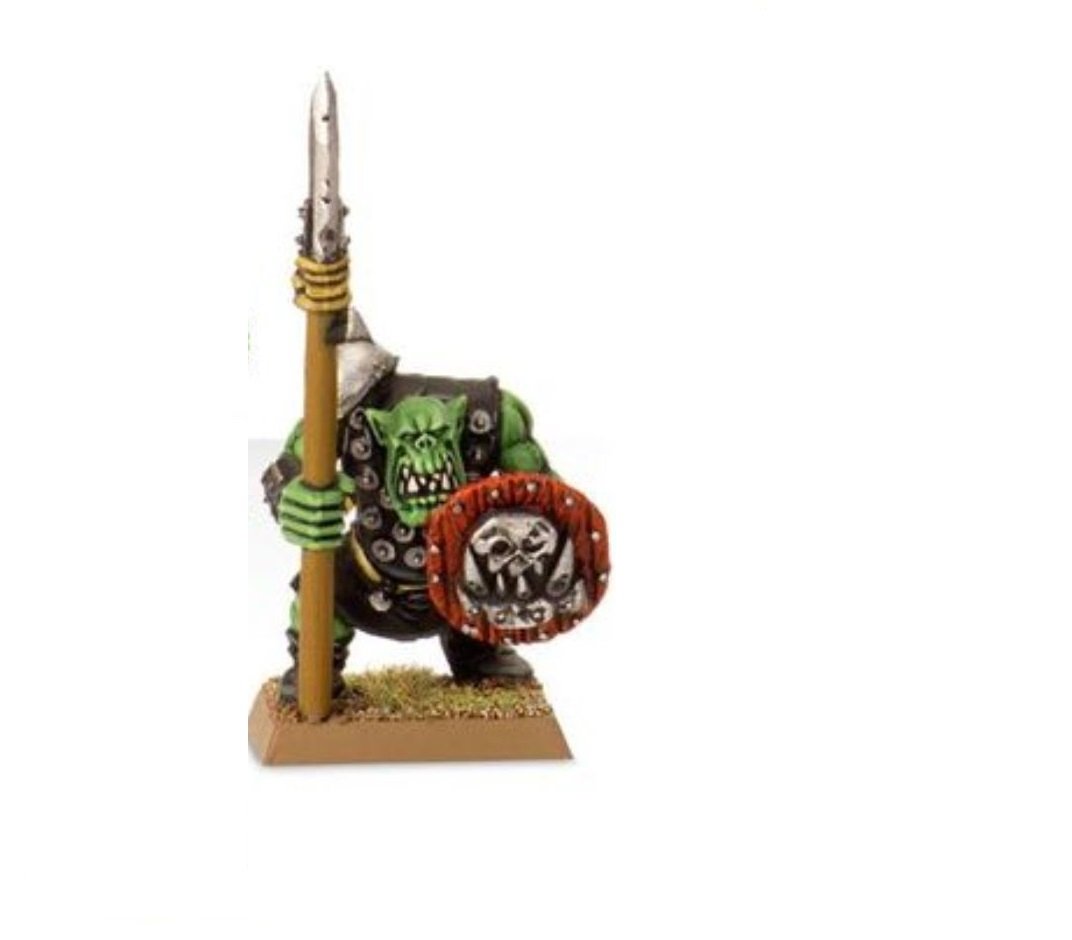 Should probably just be a FLC addition honestly. Not all forest gobbos have a spider to go to war on, plenty go fighting purely on foot. These lads would work similarly to Lothern Sea Guard, equipped with poisonous bows, shields and spears. Lacking the stalk ability of Night Goblins but possessing vanguard and bonuses in forests instead. 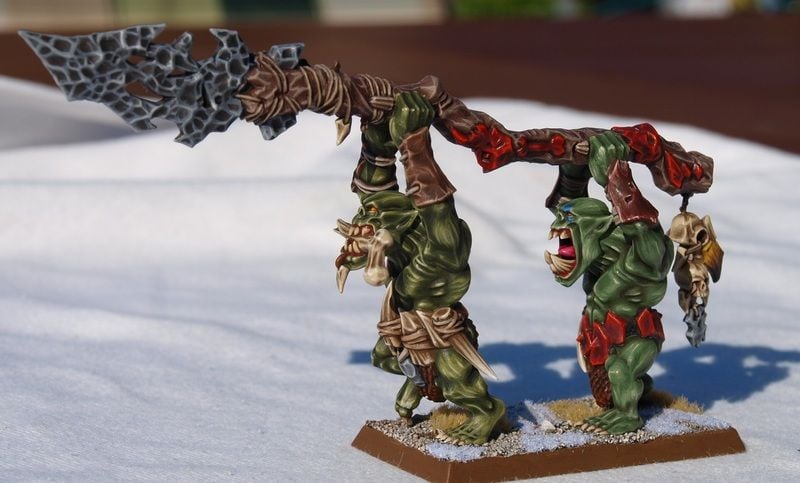 Sort of an orc 'weapon team' though in truth these madlads just run up to monsters and stick 'em as many times as possible. 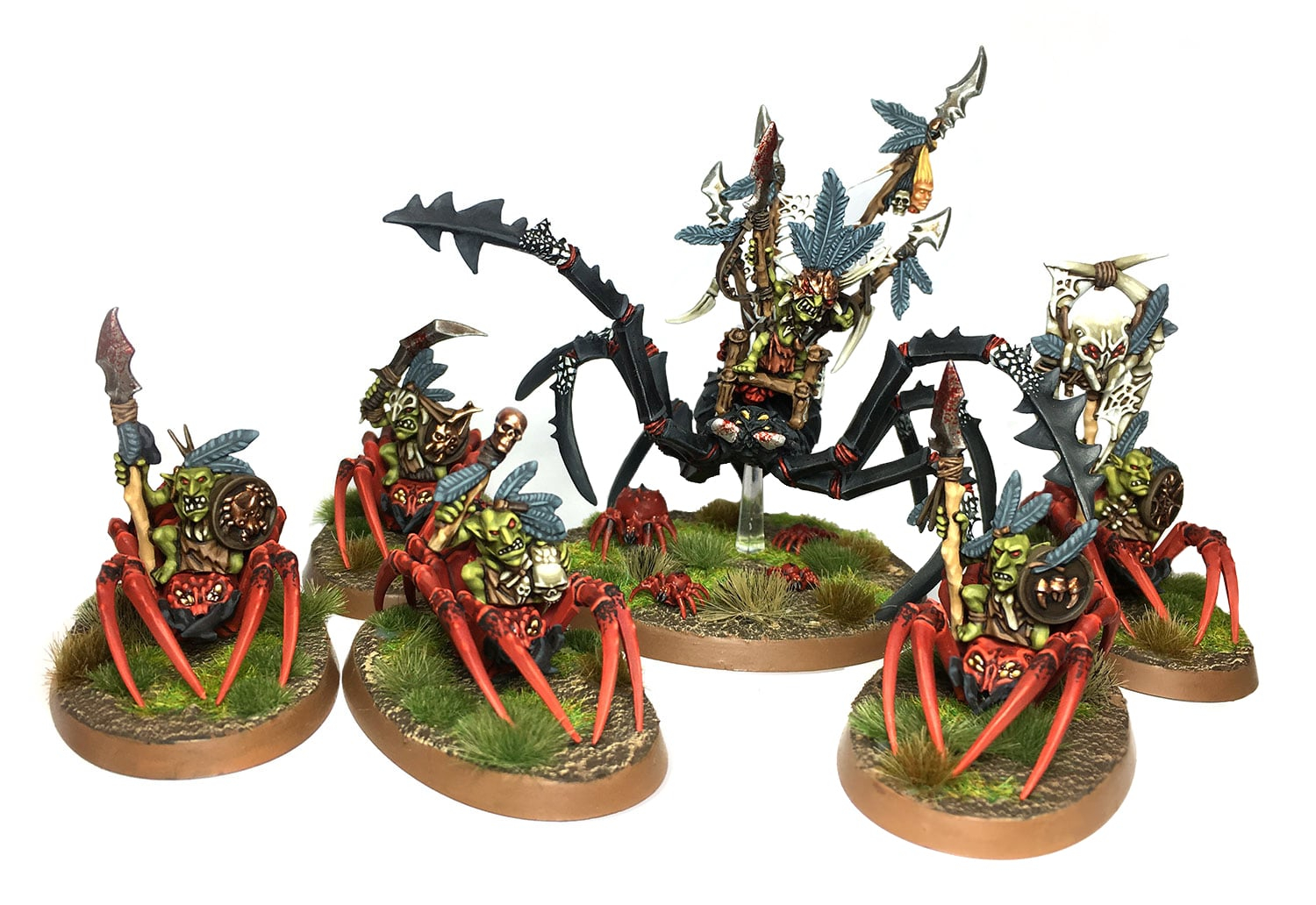 Image shows the size difference between the Spider Riders we already have in game and the monstrous cavalry Gigantic Spiders. These would essentially be a fast and offensive equivalent of the Vampire Coast's Rotting Prometheans. Eight Legged Freaks anyone??? 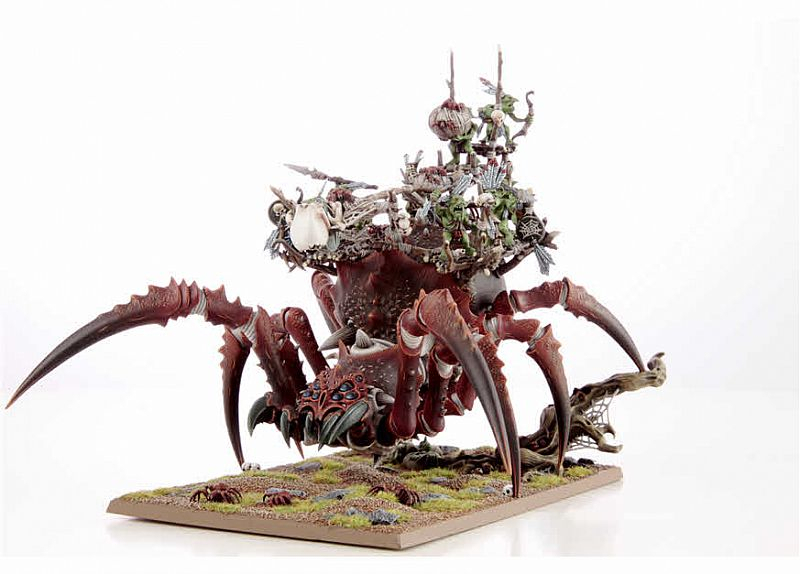 Just an artillery equipped variant of the current Arachnarok Spiders. The mounted web flinger catapults launches huge balls of sticky spider silk that coats the ground in slowing mess and inhibits movement of anything it hits as well as damage. 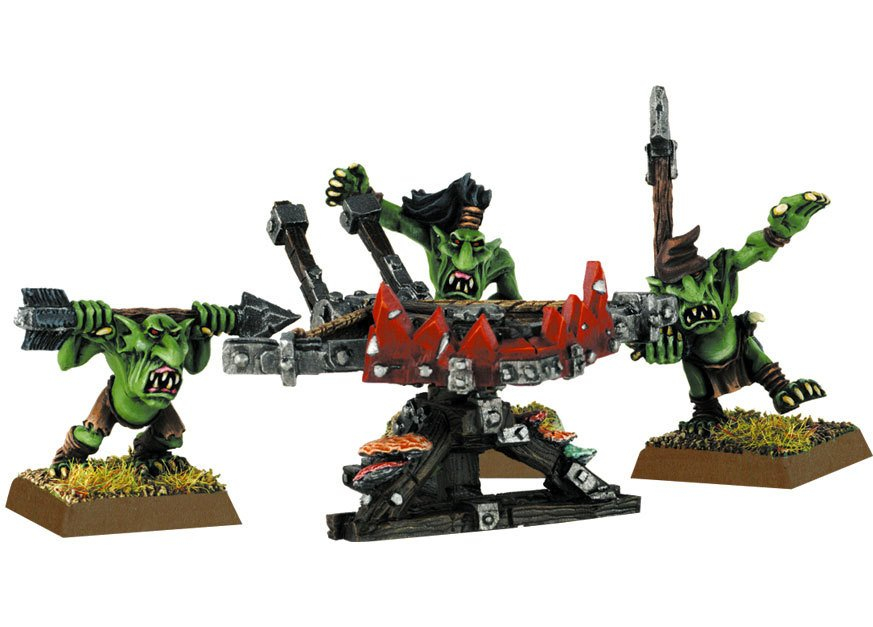 It's a goblin ballista. Enough said. 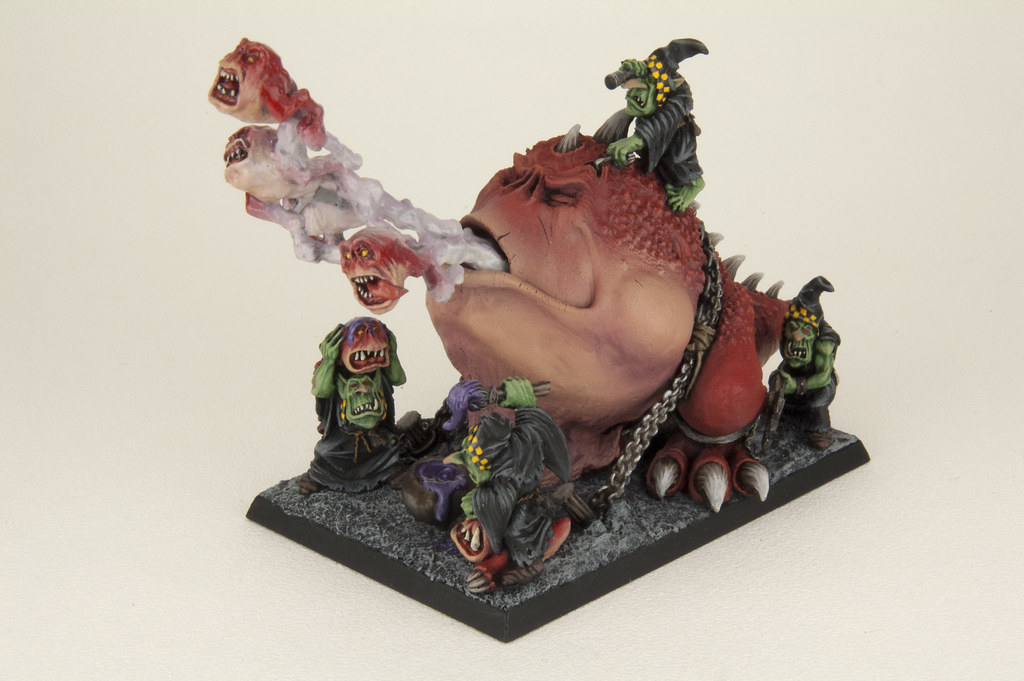 Rather strange 'artillery piece' of the greenskins. Shoots explosive squigs at the enemy! 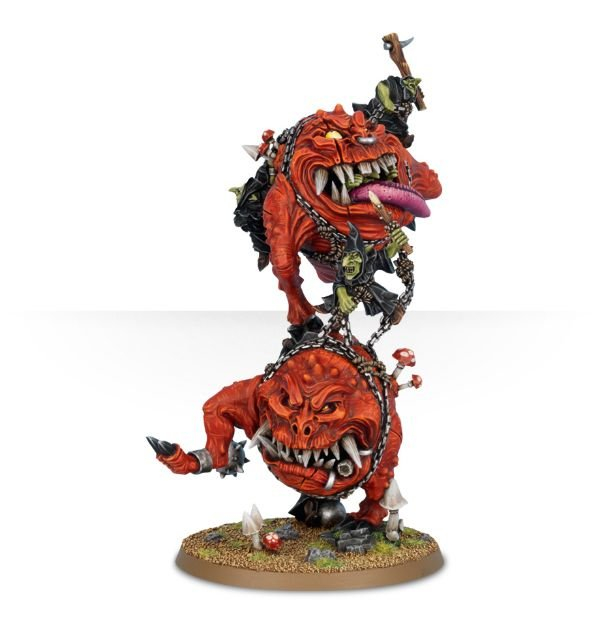 I have no idea how they would animate this, but considering they already made Nurglings we know they can do it! Nigh uncontrollable whirling chain of giant squig death. 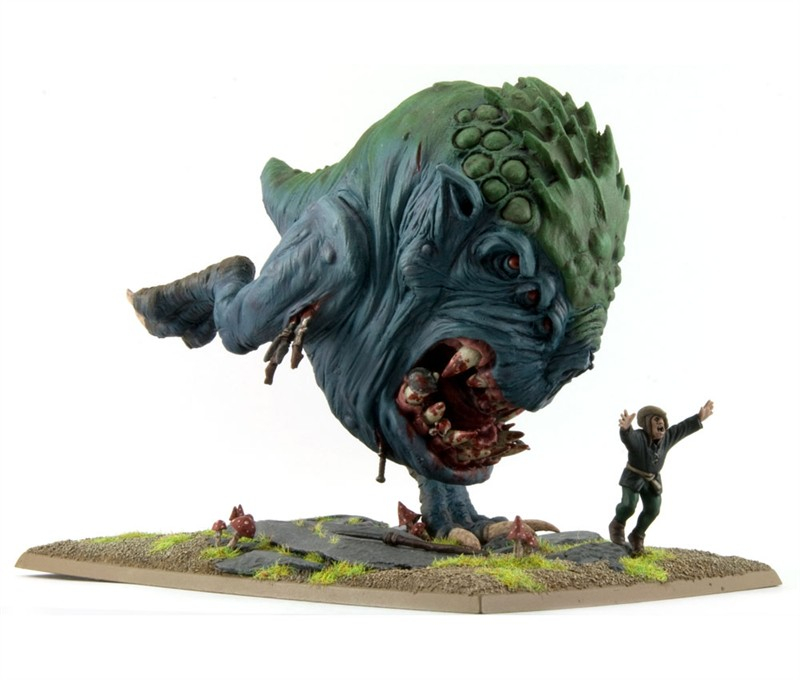 A super unit sort of like the Rogue Idol. Would be roughly on par with Carnosaurs on the battle field.

Welp that's all I got for this one. Post anything I may have missed below please, as well as constructive criticism to help me improve. A lot of my summaries are brief as I didn't think there needs to be much explanation with these units. Next entry will be about leeches! 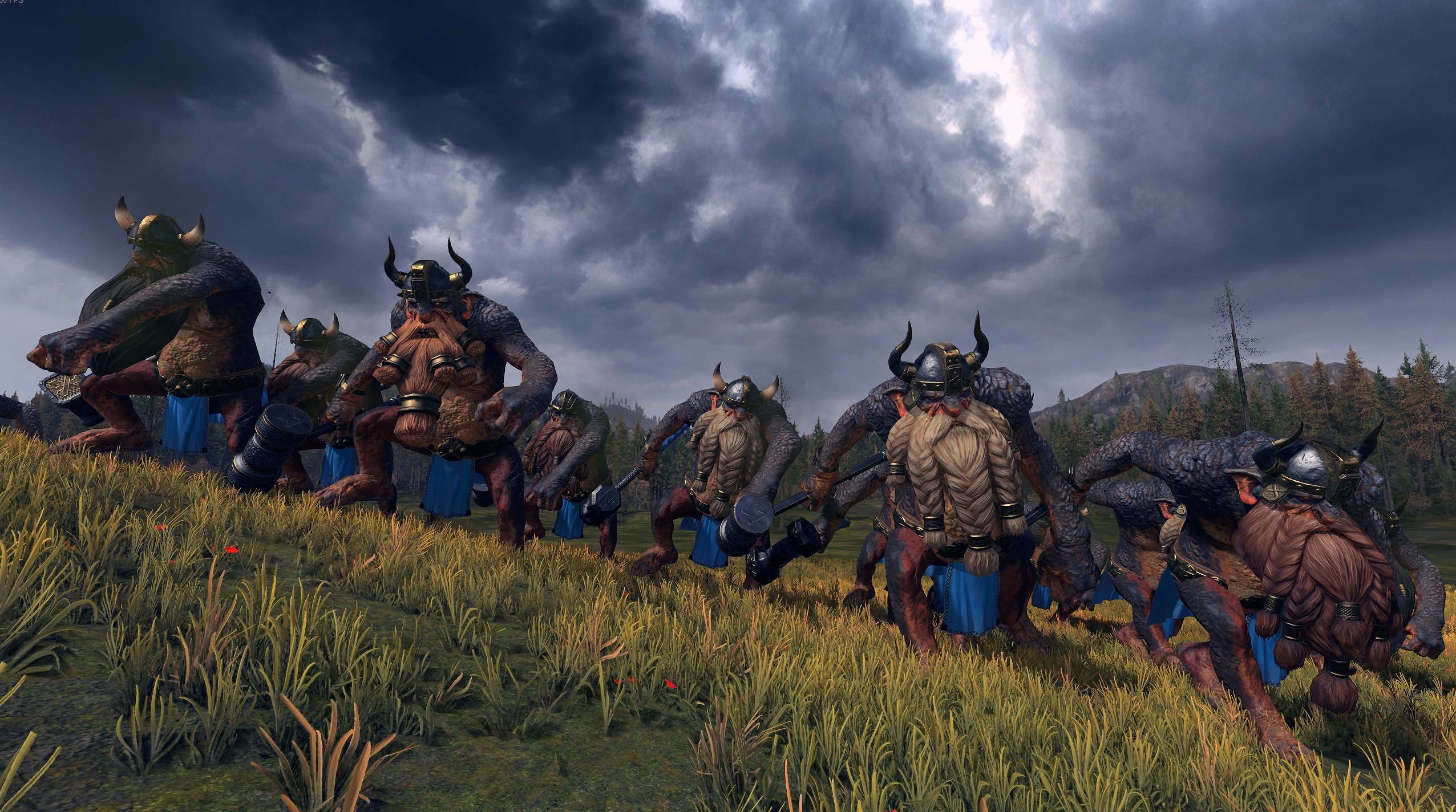