DasyLazy Registered Users Posts: 6
April 29 edited May 3 in Crashes
as the title says, i'm playing a legendary campaign for over 300 hours now, and sure sometimes a crash or so would happen, but i'd just open the game and it would be fine then, but now, it crashed and it doesn't let me at all continue the game, it instantly crashes when i try to load the save file... this gives me anxiety not gonna lie 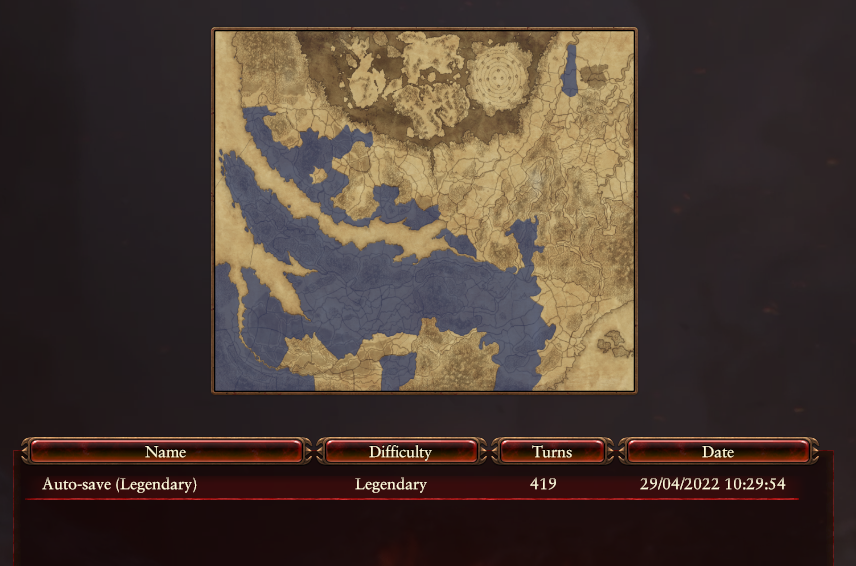 - i've tried to reinstall the game and do the same, didn't work;

- i got drivers all updated, and i never had this issue on the 400 hours that i've been playing the game;

- i tried loading any other save from other campaigns and even start a new campaign, all work perfectly well, just that one legendary save doesn't load.

I have no mods installed at all, neither ever had, and i didn't really add nor touched game files ever at all, everything is as default as it comes, including controls

( i read a few steps, so i'll past them here already):

i had a few crashes during post game battles, come to think of it, that's when i had most of the crashes, but they all worked fine after i re-open them, but this time, i sieged a settlement with an army, i forgot about which settlement, but it was the one between Path to the East / Gash Kadrak / Mountains of Mourn, they had one army on it plus garrison, but then they engaged on me, leading to a land battle, which i won and then, the game suddendly crashed on post game loading, i even took a picture of it during load before it crashed, because it was frozen on loading forever, which wasn't normal, and it always seem to crash around 20-25%, all the time whenever i try to load this save i mean, usually all others, and i mean... all of them, used to crash around 95%, this one is different

Attached (i don't know what dump file is, but if i got it right, it should be this)

i love this game a lot, and i've been putting so many hours on this campaign, with a notebook of all the bugs, typos, good/bad things about it imo, that i intended to share to try and make this piece of art as perfect as possible, but sadly this happening now, really makes me so sad, since i have no way to get back into the save file...