Akfiz Registered Users Posts: 19
June 2022 in Total War: SHOGUN 2
These are a list of suggestion for a Total War: Shogun 2 Definitive Edition

What is a Definitive Edition? A definitive edition is a relaunch of the game with improved grahpics, no more grinding, availability of all previous content and new content but not in a way that changes the overall mechanics of the game and very rarely modifies an already existing game mechanic. This is different from a remaster, which make change the game's core game mechanics. And is different from a GOTY edition which usually only adds all previous content, a definitive edition can be best seen as an upgrade to an already existing game.

That being said, this is my list for Shogun 2 Definitive Edition improvements:

2. In the main menu, order the campaigns in chronlogical order as following ->
- Rise of the Samurai
- Sengoku Jidai
- Fall of the Samurai
Essentially, the birth, peak period and death of the samurai. All in one game. Since every previous Shogun 2 content comes with the Definitive Edition, there's no reason not to order them in chronological order. 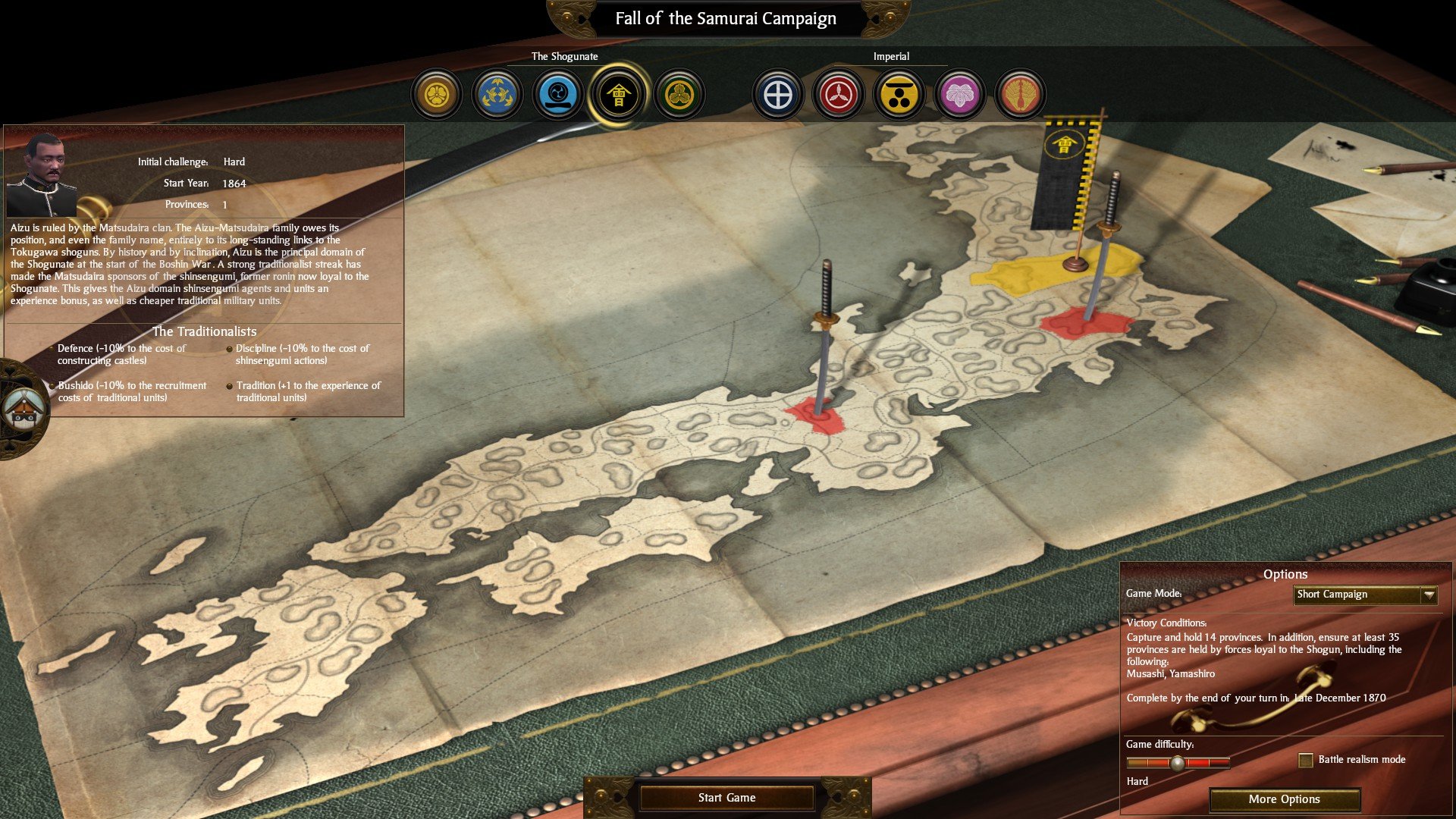 4. Rename the "Avatar Conquest" into "Multiplayer Battle" -> For clarification that this section is focused on single battles, but also because the grinding elements in multiplayer will be removed as is often the case for a definitive edition.

5. Inside multiplayer, "your avatar" will be renamed "your genera", which you can still costumize, but this time you will have 3 generals (which you can costumize): for Rise of the Samurai, Sengoku Jidai and Fall of the Samurai. You will no longer have 2 samurai per era since levels will be removed to remove grind and you can instantly assign your general's skill points. -> This will keep the costumization aspect of the multiplayer while removing the grind.

You no longer need 2 generals per era (in total 4 generals) since leveling will be removed, however, 1 Rise of the Samurai general will be added raising the total number of costumizeable general to 3.

In the top-left section of the game where you would swap generals, now you can choose with a single click to costumize the: Rise of the Samurai, Sengoku Jidai or Fall of the Samurai general.

Swapping between these 3 generals is purely for costumization. When creating a battle or joining ranked games, you can choose which era you want to play in and will be automatically assigned with that general. And when joining a game, the last section that used to be called "Avatar" is renamed "Era" and the possible eras are: RoTS, Sengoku, FoTS. This way, you will know which era you will play before joining a game.

6. The Army & Progression tab will remain the same, and will show different things depending on the general you have selected on top-left. All units will be unlocked, but you can still gain veterancy during battle -> The veterancy of units is not such a grindy aspect. It is true that there is a little work to get to max veterancy, but generally speaking, it's not a long road, the gap between full veteran and non-veteran units matters but is not that big and the greater the veterancy the greater the cost of being added into the battle. The same is true with the general (to which you should be able to change his skills anytime, or create lists of pre-defined skills for your general that you can change before the battle begins). The more skills you have/use with the general, the more expensive he is. So it's not always wise to invest all your points in the general.

7. "Avatar Profile" should be renamed to "Player Profile" and there should be all your stats, not only the stats of your current general -> Stats for RoTS, Sengoku and FoTS all in one.

8. The Conquest map will be removed. Retainers will also be removed. Instead you will have all units unlocked from start. -> It is the singlest most grindy aspect of Shogun 2 multiplayer, on the second place being the level up of the general, and is one of the reason many players would rather not play multiplayer. People don't like to play a lot to merely unlock units. It seems like this much amount of grind would make them want to play more, in reality, it only makes them want to quit early and try another game with far less grind where they can have far more fun and full powers without having to spend 100 hours into the game. If you are a bad player, you should be a bad player because of your skill level, not because you play with a handicap since you haven't unlocked that unit or skill other people have, this seems very unfair to a lot of players and is the reason why they leave some games.

9. Instead of conquest map, you will have 4 buttons of similar size as the 3 on the left and 3 on the right -> Ranked Battle, which combines "Set Up Team" with "Match Made Battle", "Create Game" which is unranked, and "Join Game" which is again unranked, the current "Battle List". And "Campaign Drop-In" which will bring you on a waiting list for a campaign drop-in. -> By clicking "Ranked Game" you will be given a menu where you can check which one you want:
- Era (RoTS, Sengoku, FoTS)
- Battle (Land, Sea, Siege)
- Funds (Small, Medium, Large)
- Size (1vs1, 2vs2, 3vs3, 4vs4)
- You will also have the option to invite friends in your party. If for example you have 2 friends in your part, the 1vs1 and 2vs2 options will become greyed out.

Create Game will automatically send you to the "Create Game" menu for unranked games. Having the button there encourages more people to host games rather than look for them. And "Join Game" is simply the Battle list as is right now.

"Campaign Drop-In" will not be a unique button unto itself that does only that. "Invades" other players' campaign.

10. "Allow Mixed Avatars" battles will be removed, since now you will play based on eras. Except on "Create Game", there you can create casual (non-ranked games) with mixed avatars, where you can pick from RoTS, Sengoku and FoTS units all at the same time -> This is not meant to be a realistic scenario, therefore no rank, only a possibility for the players who really want to do that thing.

This is the new content that truly makes it a Definitive Edition.

13. A new multiplayer option "Splitscreen Campaign" -> Total War is both a TBS and RTS game. If you want to play a TBS game from the same single PC, this option gives you the possiblity. You will be able to play with multiple factions from the same PC, kind of like a multiplayer campaign game, and if it ever comes down to player vs player battle the AI will auto-reslove the battle. It's not much, but some players enjoy specifically that part of the game.

14. All factions unlocked for all 3 campaigns -> You can play with literally everyone. Including the Shogun in all 3 campaigns. There are 46 factions in Sengoku, be able to play with all 46. All they need is personalized unique stats. They don't even need a personalized intro video or a personalized starting situation being explained to that. Those parts can be removed from the other 13 factions for consistency. I believe players would appreciate a lot more being able to play with 46 factions, than being able to play with 13 factions but having a video intro an campaign start into for all 13 of them. The same will be true for Rise of the Samurai and Fall of the Samurai campaigns as well, all factions unlocked. 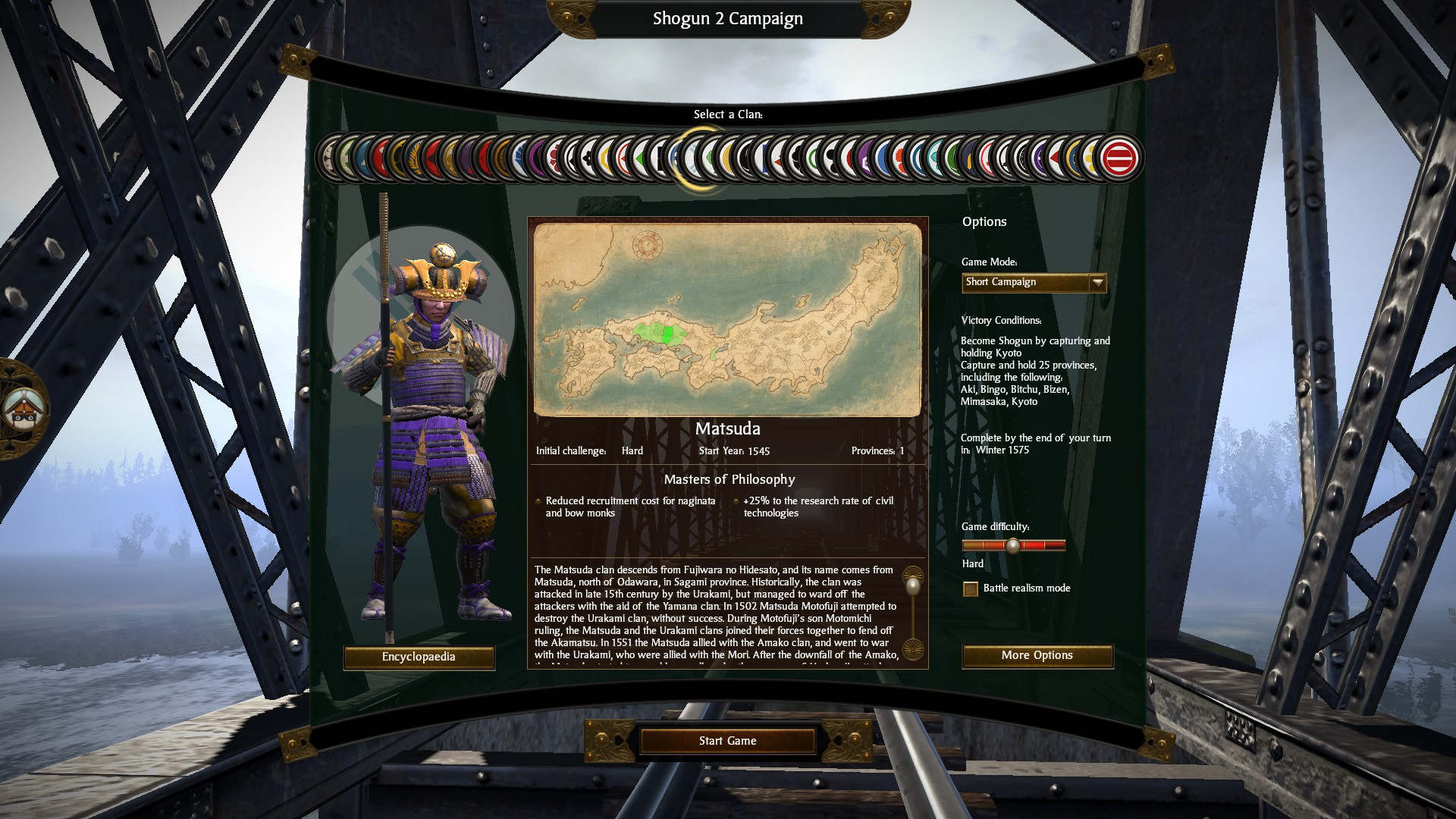 Note: This will not be the layout, the layout will be the one of Fall of the Samurai, I just wanted to illustrate all factions unlocked.

15. New multiplayer campaign game modes: Cooperative, Versus with select-team, Free for All. And Traditional but only for FoTS. -> In co-op, all players play together. In versus, each player can choose whether they want to be team 1-4 and play like that. In Free for All its' everyplayed for himself. Additionally, in Fall of the Samurai only, there will be 1 extra mode - Traditional - where Shogunate clans will support the Shogun and Imperial Clans will support the Emperor.
Flag 0 · Disagree Agree
Sign In or Register to comment.