Razegash Registered Users Posts: 3
August 30 in Campaign Ideas
Hello all. Just finished my first IE campaign and I bring my feedback for anyone that will listen. I will probably be playing IE for years to come, so I'll drop my feedback here in case it helps.

Overall Thoughts:
1) in WH2, bretonia got a -10 Public Order event for several turns at the start. That gives players something to do and armies of greenskins to fight. in Wh3 this event is removed, and so I thought the early game would be boring and with nothing to do. I was wrong, there was always plenty of challenge, from Mousillon to the orcs of grug zlint to Kemmler to Bel'akor.

2) Besides one minor graphical bug, I've noticed no bugs throught this campaign. I've experienced no crashes.

4) Being able to trade peasant bowmen for high elf archers due to the allegiance mechanic is very fun. The unit cap should be increased, and maybe considered per lord basis instead of the entire faction. The ability to trade settlements is also very fun. The diplomacy upgrade was a big success.

5) I've seen a lot of comments about over-passive AI but I didn't notice it. I got attacked by AI a decent amount.

6) Bretonnia's foundation in IE is solid, it playes like it should : a cavalry focused faction with lore and diplomacy benefits for chivalry.

7) Bretonnia really could make use of the Warband upgrade. I know players are putting that system on everything under the sun, like an Empire footman becoming a Greatsword, but the only other faction it makes sense besides chaos is Bretonnia for it's knights. A "Virtue" system, like the marks of chaos, could help further diversify and differentiate between it's knights. There would be no need for a visual update for each virtue though, unlike the marks.

Points of concern:
1) Besides the LL's Items quest battles, I've received not a single quest as Bretonnia. Not a single one. No quests to defend allied settlements, no quests to take revenge on lords that sacked my towns, no quests to defeat enemies close or far away. This, and the next point gave a certain boredom mid-to-late campaign

2) Bretonia has a big map, with little to do in it. No quests, no random battles (Like the Empire or Wood Elves), Beastmen continue to be mostly an afterthought, norscan raids were few and far between( same as in WH2), no spawn or respawn of orc hordes / beastmen / anything else. After taking out Kemmler and Mousillon, the game became a singular push downwards to retake lands from Grom the fatty. Like, look at this: 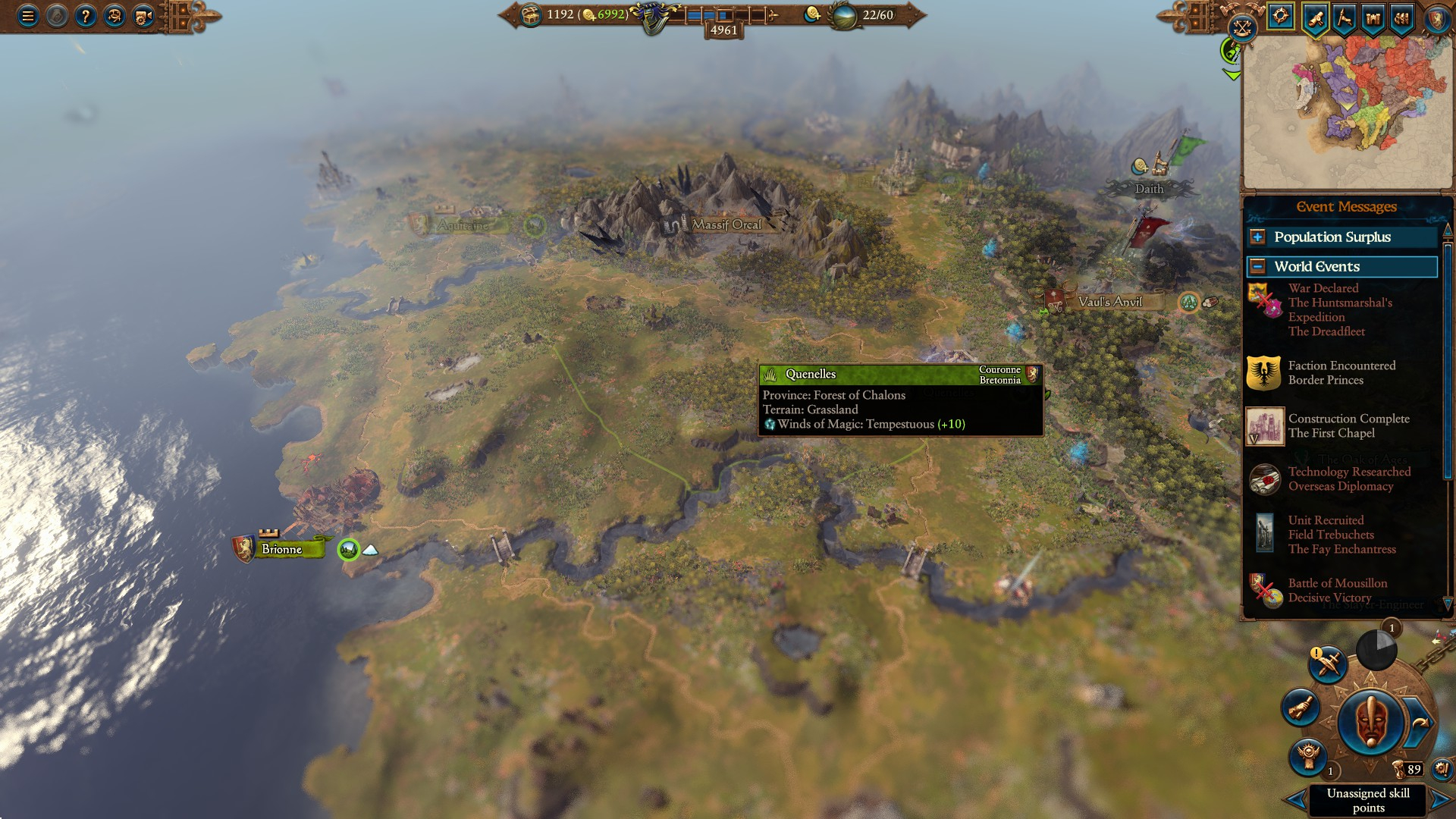 In all this land there are no treasures, no battles, no rogue armies, no enemies, nothing. The same amount of map space in the ocean would have 2-4 treasures, 1-2 random pirates patrolling around, besides all the possible enemy armies just passing by. I strongly believe that having random treasures spawn in the land is a good idea. It can give more enemy diversity and more land battles for land-locked factions, which are quite a lot of them.

3) By endgame I had almost no useful items besides the LL's , certainly nowhere near enough to think about upgrading them. Having more quests, treasure land battles, and other random battles in Bretonia would fix that.

3) This is the only bug I could find: 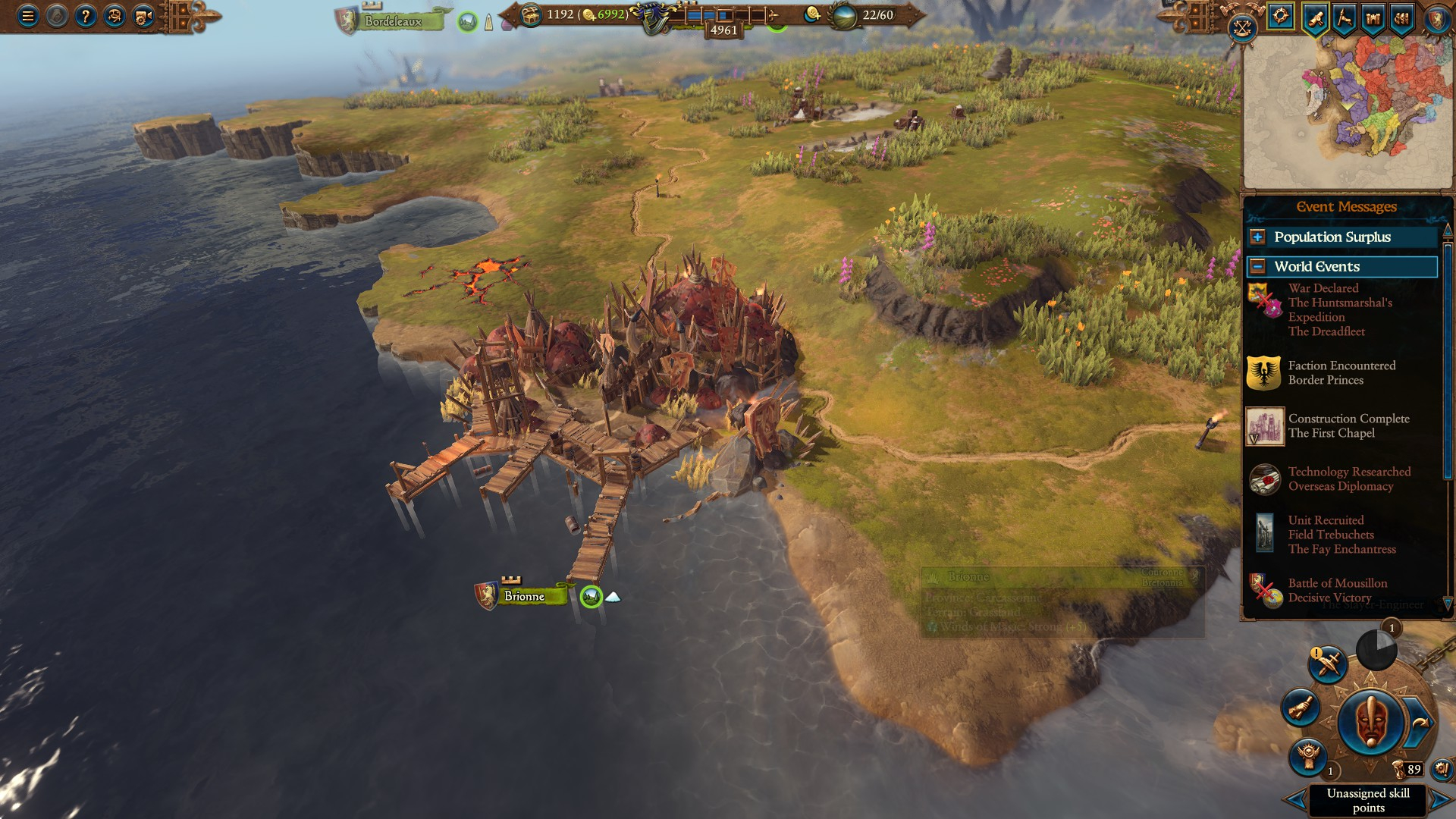 4) Bretonnia's Vow system could use a rework / touch-up. It's far from a priority in it's current state though, unlike say Norsca.

TL;DR : No bugs, solid foundation, fun, Bretonia plays like it should. It needs just a little more spice to go from a great campaign to an outstanding one. The things that could make Bretonnia a more fun and dynamic faction to play as would do the same for a lot of "land locked" factions.