herjan1987 Posts: 644Registered Users
September 2016 edited October 2016 in General Discussion
After the Grim and the Grave DLC, we can see that their will place for Regiments of Renown. That said Games Workshop was once a creative company and created special units that where uniqe in their ways.

Its important to note out these units where set in period, where the current fluff was not existent. This is why Grom the Paunch was still a goblin an and orc and he was able have a drink with Dwarfs, just to start out the Goblin Wars! That why High elfs are called Sea Elves and there are half orcs mentionned to live in Nuln or having Lizardmen under Caraz-a-Carak ( Karaz-a-Karak ).

These regiments are long forgotten and most of them are lost in the lore, but they where one of the first to emerge from Games Workshops sculpting tables. Have fun and a with this little tribute to them!

So lets wind the clock back to 1984 to the forgotten times of Warhammer Fantasy battles ( a small disclaimer: If a Regiment of Renown had a later iteration then I will be using that, that is the reason of the miniatures quality differences ) :

First release: Apr 1984 ( models shown where realised in August 1993 and it was made by Micheal Perry )

After Goblins burned his Brewery Josep Bugman swore revange againts the Grobi and he hunts them with his compainions. 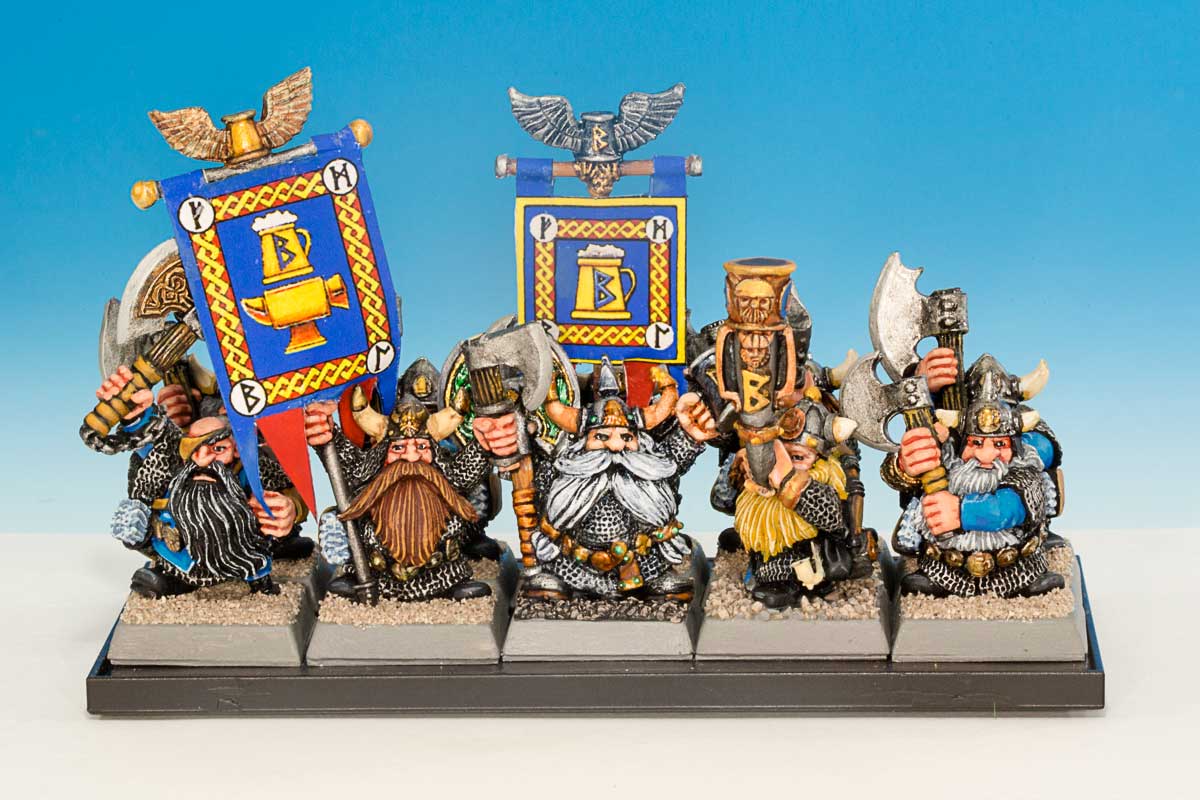 An order of Kinght monks, who crusades for the right thinking folk. Killing goblins and bandits alike. 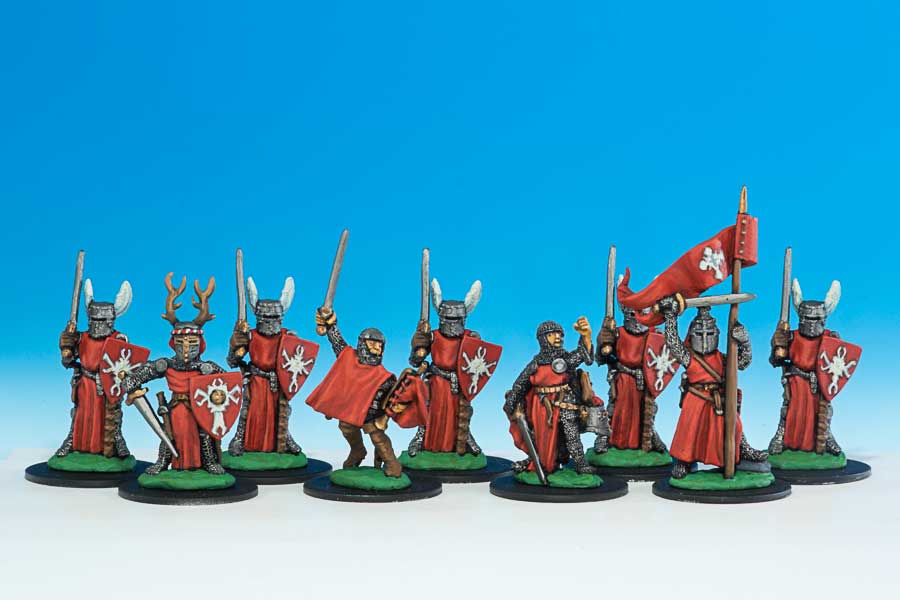 Half Orc, half Goblin warriors who served in the legendary Goblins Wars, which was fought between Dwarfs and the Orcs and Goblins. 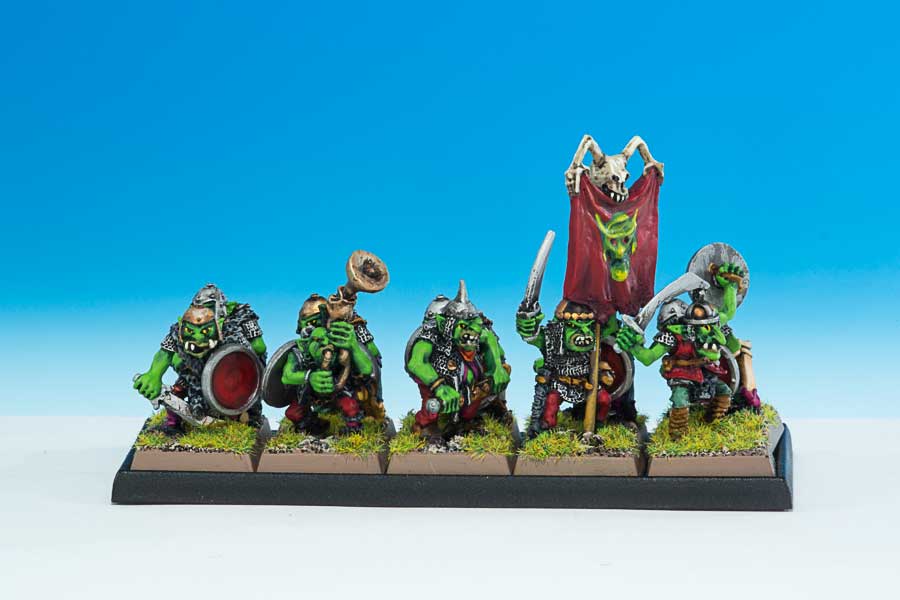 A dark elf company that like to turn thier enemys skin into capes. 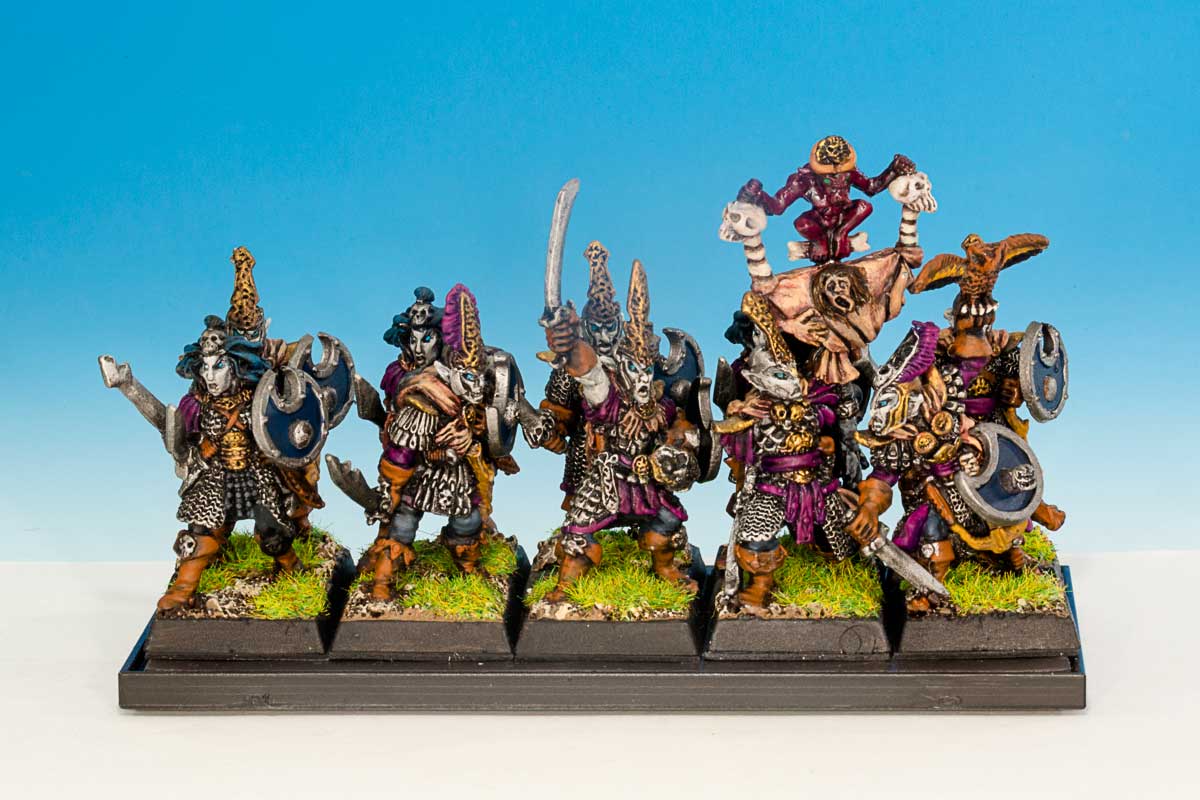 A band of orc archer who terrorize the Black Fire pass. 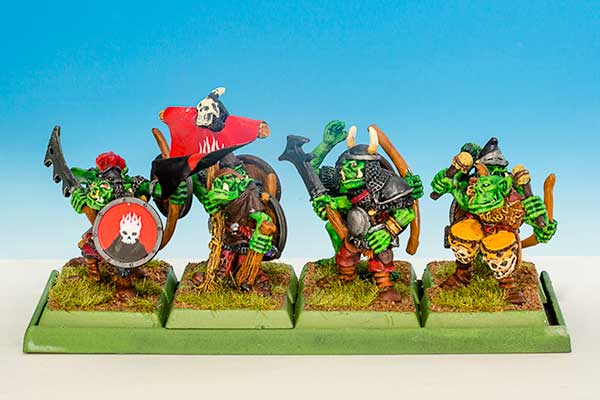 A group of desert living dwellers who went out on a war on the Sea Elves. 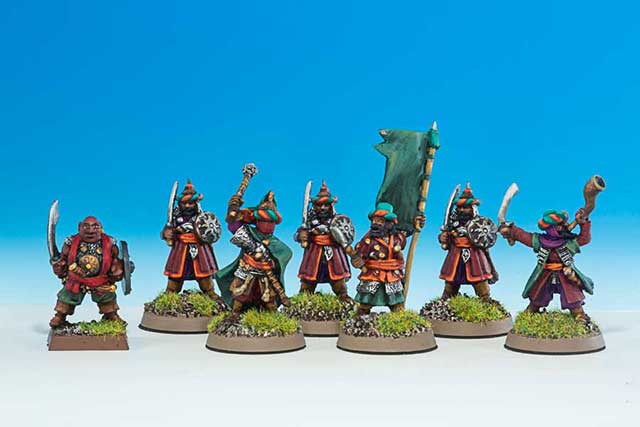 Wood Elf archers, who left the old world and lent their service to the Sea Elf lord in a Southland Campaign. After returning to the Old World their where the backbone of the Wood elf defence. 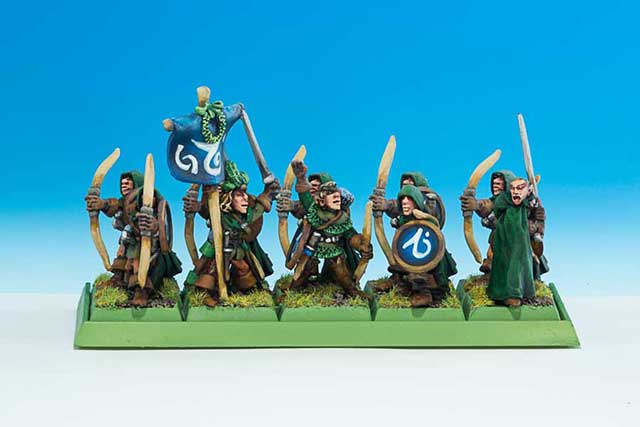 A group of mercenary Ogres, lead by the most famous of them all Golgfag. 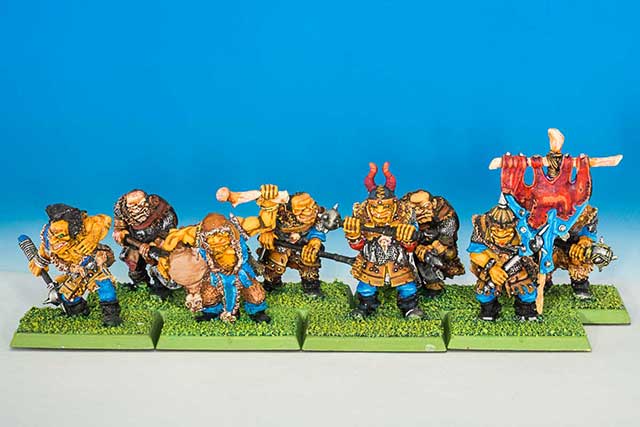 A band of half orc lead by Mudat Brokenbone, who was later killed, by the goblin general Grom, 'The Paunch of Misty Mountain' ( who was later reincarted as the Orc Warlord Grom, the Paunch ) 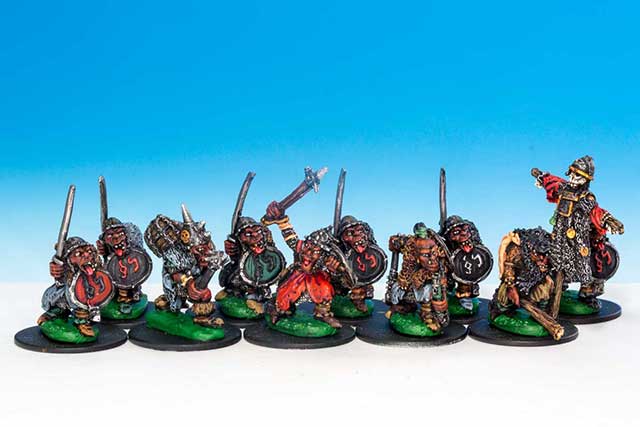 A company of elves from the city of Lothern, who defends the boarders of the Elven kingdoms. 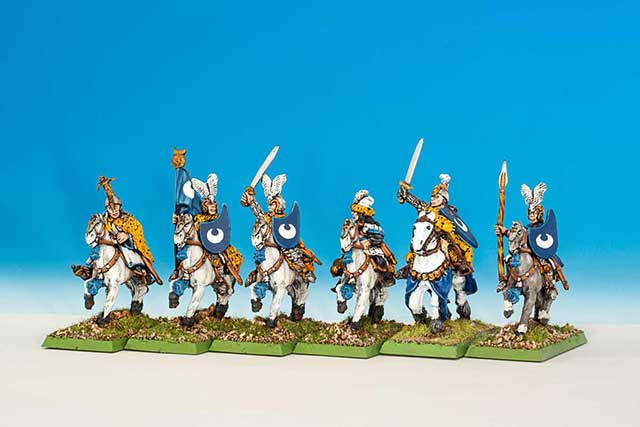 Karnacs Lizardmen raider where the residence of the lower levels of Caraz-a-Carak, and the dwarfs have thought them unitl they decide to seal the lower part of the carac ( karak ). What happend to Karnac and his raiders nobody knows. 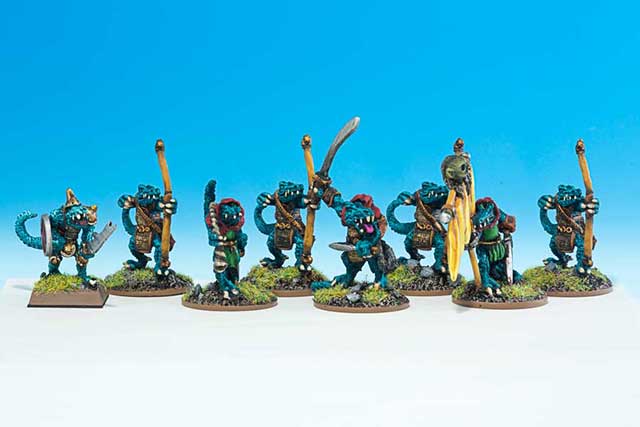 Barda Von Micklestein a wizard in Marienburg was not a known or powerfull wizard, but he was the first, who was able to summon Gargoyles. Gargoyles that desolated Marienburg. Later other wizards where able to summon them in more controlled manner. 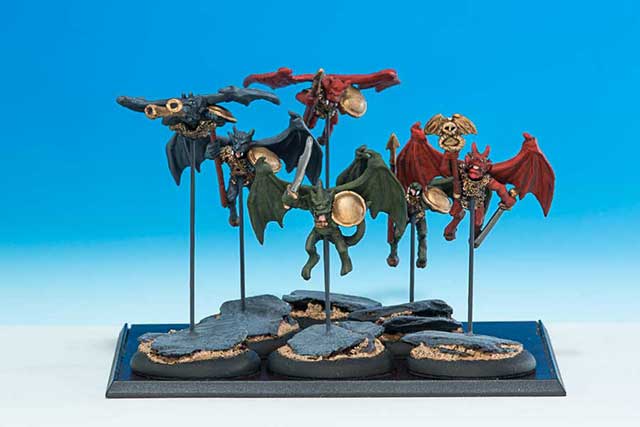 Lead by D'roi Haisplinn, Captain of the Guard of Lothern, who was is a neurotic, homicidal maniac. this group of Elves, was the responsible to keep order in the freeport of Lothern, where Norse traders, Old World merchants, adventurers, sailors, dropouts, drunkards and other assorted wierdoes wander around to see the only part of the Elven kingdom that they are allowed to.

Side note this is the unit that inspired the infamous ( from the TT players standpoint, this unit has spears and shield and a bow and they can use it all ) Lothern Sea Guard unit in the later fluff. 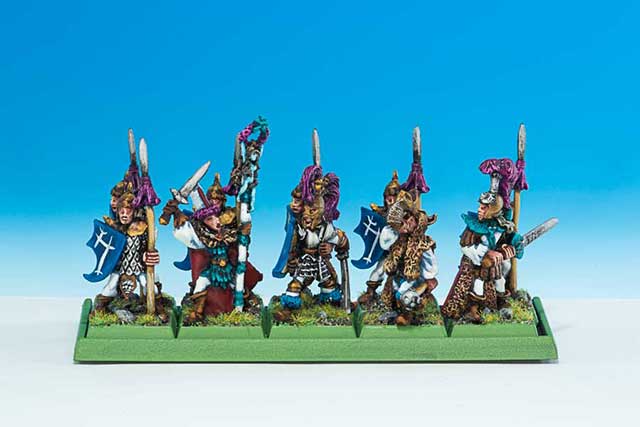 First release: January 1985 ( special thing to mention that it was design by Alan and Micheal Perry, also known as Perry twins, who where responsible for many great miniatures to come in the Games Workshop range for example the bretonnian Green Knight )

Notlob was orc outlaw, who beaten back the humans and dwarfs out of the Black Fire Pass with his Bolt Throwing Engines. 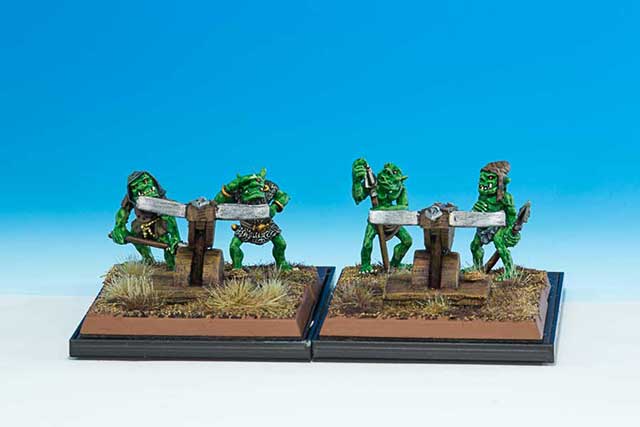 After getting kicked out from the the Old World, he fled to the Dark Lands alongside with the other Orc, Goblins and Hobgoblins. There he carved an empire from himself and soon he started to do campaign in the World Edge Mountains againts the dwarfs. 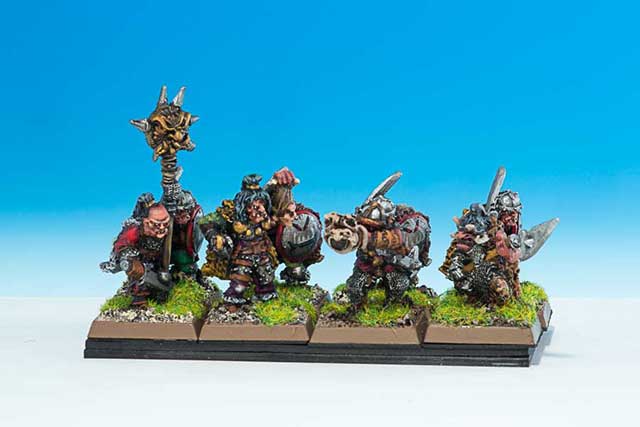 Disciples of the Red Redemption

During the War between the Men of the West and the swarthy Arabians, a warrior priest called fanatic warrior of the westerners Eroneus Balbadron, former member of the Knights of the Brotherhood, found a book and which contained the truth. Though this truth contained the teaching of Khorne, the blood. Eroneus, then butchered his former fellow Kinghts of the Brotherhood founded the Disciples of the Red Redemption and a man Darkhoth, who was initiated, by the same book lead this regiments against all the heretics who stands against Khorne. 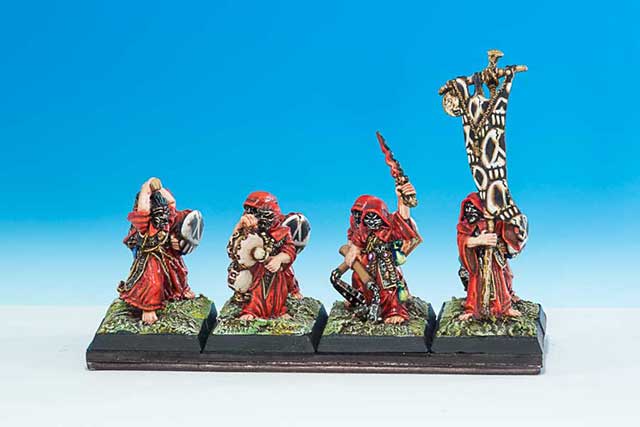 A band black orc who managed to pillage and plunder over 42 years without a getting defeated and lead by Eeza Ugezod, who fate is unknown to us. 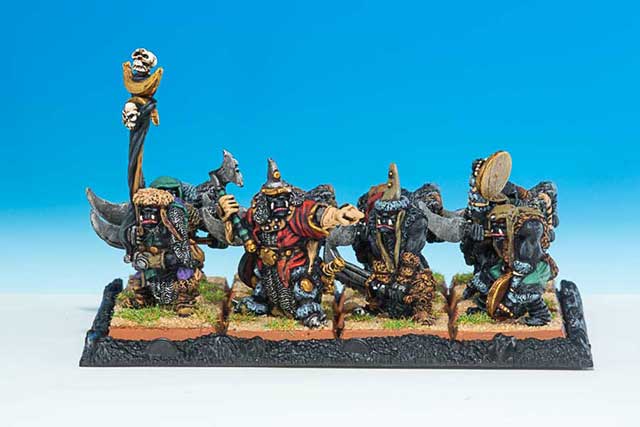 Knights of the Cleansing Flame

After e discovered that his chapter brothers, the Knights of the Brotherhood was brutally murdered, most likely by his own cousin Eroneus Balbadron and the Disciples of the Red Redemption, Chronus Goodheart swore a revenge on the ruines powers of Chaos to avange his cousins "death". 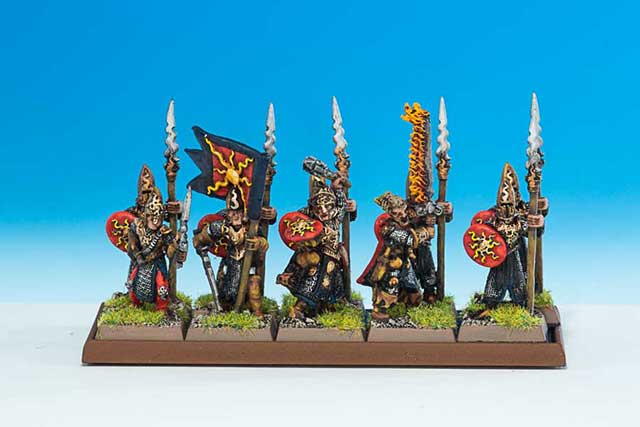 King Ulfar Stonehammer of Karak-Ungor lay dying. Relatives and retainers were gathered round his bed with its four dragon-topped posts, chewing their beards in grief.

"Where is my son?" croaked the king, "Let him come to me." A servant slipped out of the royal bedchamber and hurried to the Prince's apartments. After a few minutes, Prince Ulther son of Ulfar entered the chamber, whistling cheerfully.

"Well, that's nice," gasped the king, "What about a bit of grief?" The Prince scratched his beard. "Of course I'll miss you and all that," he said, "But then, I am going to be king when you've hung up your hammer. Will mixed feelings do?" The king raised his dimming eyes to the ceiling ."Come closer," he wheezed, "There are some things I must tell you before I die." The Prince approached the four-poster hopefully, as did the court scribe, quill in hand.

"My son," croaked the king, "I leave you the rulership of Karak-Ungor" - there was an uncomfortable shuffling among the king's retainers at this point - "And I leave you my war-axe, with the dragon-etched blade..."

"Not the hammer?" interrupted the Prince, a little peevishly.

"That's better. And along with the axe, I leave you a duty. Years ago, I swore that I would never rest until the blight of Chaos was cut out from our race, and the Chaos Dwarfs were no more. I pass that oath on to you. I also pass on to you my oath to exterminate the Goblins and their foul kin. You shall form a warband from the very cream of our race, and take it out to destroy these two enemies. You shall not rest until you have completed your task, nor shall you return to Karak-Ungor, which will be ruled in your absence by my Chancellor, Gorm the Wise..."

The king was interrupted at this point by a collective sigh from his retainers, some of whom openly started shaking hands. They were quelled by a stern glance fom the king, who carried on with his death-speech as the scribe wrote furiously. "You shall be called the Dragon Company." he continued, "Take for your standard a dragon-carved post from your father's deathbed..."

"Not now !" spluttered the king, from beneath the fallen canopy of his bed, "Oh, what's the use?" And with that, he died. 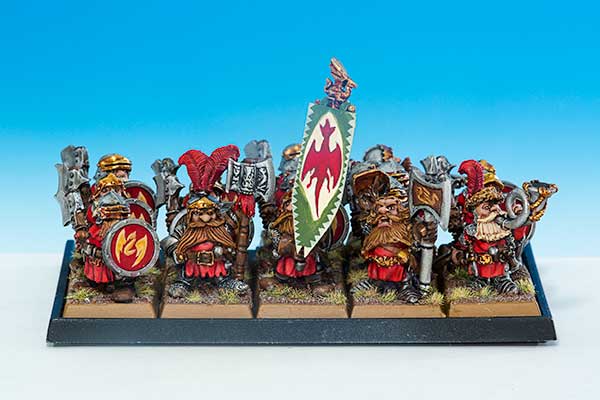 A wood elf company that patrols the border woods of the Wood elf realms, hunting for orcs. 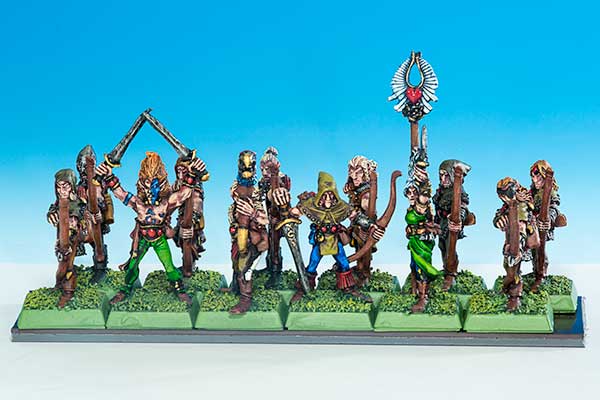 A group of skeleton warriors lead by Ennio Mordinia a former powerfull tilean mercenary captian. He was betrayed, by their patron Duke Fabriano of Lambrusco who was fearing that they will betray him and take over his stare, he sent Mordinis mercanary company into a trap, which was the seal of deal with the city state of Organza allience. Mordini swore an oath to take revange just right before he died. After five years an army of skeleton warriors poured out of the Apuccini Mountains and crushed Lambrusco forces and destroyed his city. Duke Fabriano of Lambrusco said to be dying for seven days and nights. After that The Nighmare legion turned against Organza and all the other city states. 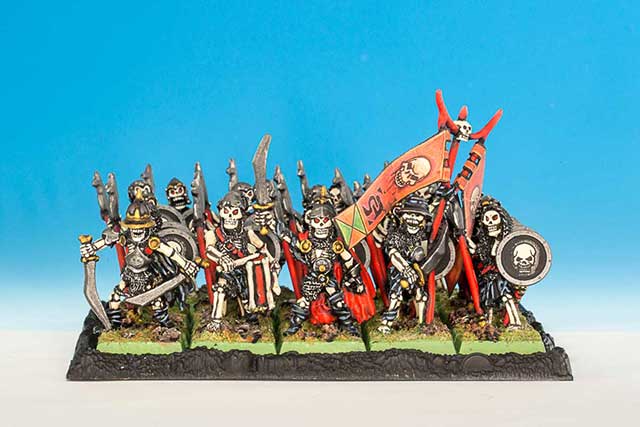 First release: November 1987 ( its worht to note that this regiment survived till the "Great Gutting" of the WHFB franchise, which was last year, of course in a updated form )

The Crooked Eye Orcs had travelled many miles westward to the Old World, suffering the sniping of mountain Goblins, incessant rain, and the endless whining of Bambrag, their incontinent shaman.

Once, they skirted a ruined Dwarfhold. Fear of spirits kept them from sheltering inside, but, a single Orc Hero named Ruglud had dared to enter. He returned unharmed, but had not spoken since, and stated blankly into space.

The Orcs huddled in the rain before a rough stone wall across a narrow pass, while Chief Gudruk Bonechewer yelled at a figure on the battlements.

'Stoopid!', he screamed, 'Do we look like Chaos boys?'

'Zog off!' echoed the reply.

Gudruk returned to the tribe, dodging the hall of stones and garbage that accompanied this witty riposte.

'Lissen,' he said. 'Them kak-'ead Gobboes reckon the Chaos boys took ev'ryfink over. They ain't comin' out an' they ain't lettin' nuffink through. They got bows an' rocks an' spears an' stuff - if we was to try and get 'em, they'd crump us to bits.' He thought for a while.

'We needs volunteers', he announced at length. His warriors developed a sudden and compelling interest in the ground at their feet.

'Or armour', whined Bambrag, 'Couldn't touch us if we 'ad cans like real Chaos boys.'

It was Ruglud who spoke. Gudruk gave him a good shake to speed the recovery of his senses, and he continued dreamily.

A swift expedition returned to the Dwarfhold. The ill-fitting plates were roughly hammered into shape and held

together with whatever came to hand. By nightfall, a small unit of armoured warriors was ready.

As the gear's discoverer and the bravest, meanest and certainly the most stupid Orc, Ruglud was made leader, At Gudruk's suggestion, Bambrag became the regimental musician on the Xylobone, a traditional Orcish instrument, and Maggot - Gudruk's youngest and most irritating whelp - joined the ranks as standard-bearer.

The tribe feasted upon Goblin-flesh long into the night - all except for Ruglud, who couldn't get his helmet off, and was reduced to sucking broth through a straw. 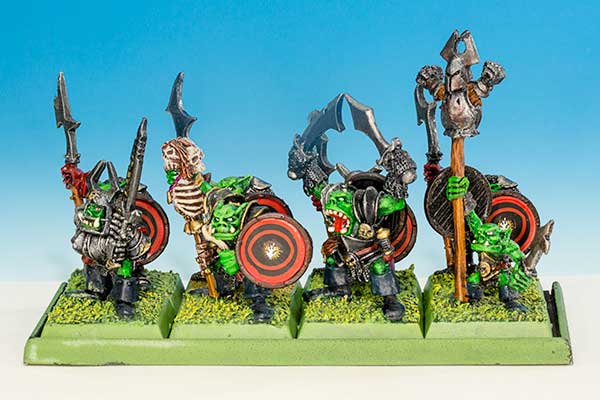 If people want I will pots the official lore an all of the regiments, I just wanted to give a quick overview about them this time.

Next up I will try to find, the lore about the sequal of the Regiments of Renown, what is called Dogs of War, which is in line with the current fluff of Warhammer Fantasy Battles.

I hope that this will give the Modders and CA some inspiration, what could be added to the game as a content.
Team Dwarfes
Team Brettonnia
Team Tomb Kings
Team High Elf
Team Averland