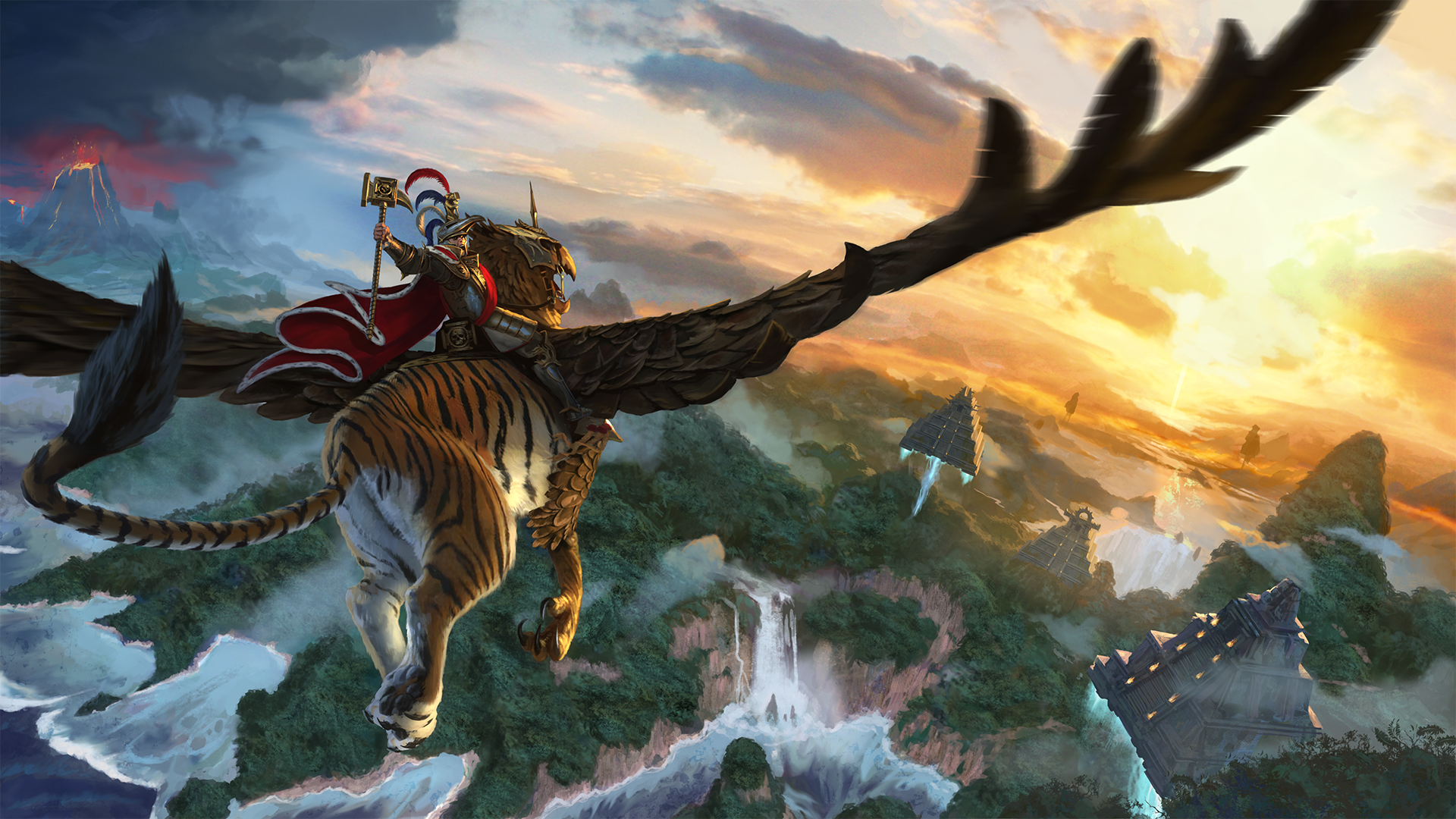 Click here to find out how to opt in: https://www.totalwar.com/blog/the-festag-update-beta

Characters of the Old World now get Red Skill Trees comparable to their New World counterparts in WARHAMMER II, plus numerous tweaks and changes to their existing skills, traits, and abilities – plus it also features some important bugfixes including a fix for a crash that occurred when a Vampire Coast faction owning Pirate Coves was destroyed.

THE FESTAG UPDATE BETA
The Festag Update Beta brings a number of improvements, changes, fixes and balances to WARHAMMER II, along with a major skills update for the Lords and Legendary Lords of the Old World that appear in WARHAMMER II’s Mortal Empires campaign.
Characters of the Old World now get Red Skill Trees comparable to their New World counterparts in WARHAMMER II, plus numerous tweaks and changes to their existing skills, traits and abilities. Character mounts have also been standardised to unlock at specific ranks. These are all detailed below.

Alongside a fresh balance pass for specific battlefield units, the Festag Update Beta also features some important bugfixes, including a fix for a crash that occurred when a Vampire Coast faction owning Pirate Coves was destroyed, and a fix that ensures Exhaustion is applied after a Hero has established a Pirate Cove.

Spectator Mode has also been updated with new functionality. Again, please see below for full details.

Instructions
It is highly recommended that you start a new campaign after opting into this beta. Since a large number of skills have been reworked, any points invested in skills prior to the Festag Update are likely to be lost in an existing save game.
We already have an existing beta named public_beta, so to avoid confusion, this will be renamed and we’ll have two betas that can be selected from:
- norsca_beta – This is for those who wish to remain on the most recent update prior to the Festag update, in order to continue with existing multiplayer save games (which will not be compatible with the Festag Update) or campaigns with existing Legendary Lord skills choices you wish to preserve. This beta was previously known as “public_beta”.
- coast_beta – This provides the Festag Update, comprising all the new content, fixes, changes and balance updates detailed below.
-
Instructions for opting into and downloading the update are as follows:

Old World character skills update
Red Skill Tree Update
This major update revamps the Red Skill Trees of the Old World Lords and Legendary Lords in Mortal Empires, adding a host of new skills and updating existing ones to be on par with their New World counterparts. Certain legacy Red Skills have been moved up to the Lords’ Yellow (character) Skill Tree, or have been compressed down into single or double-tier skills now, giving players more bang-for-buck with their skill point expenditure.

The new Red Skill Trees now look like this: 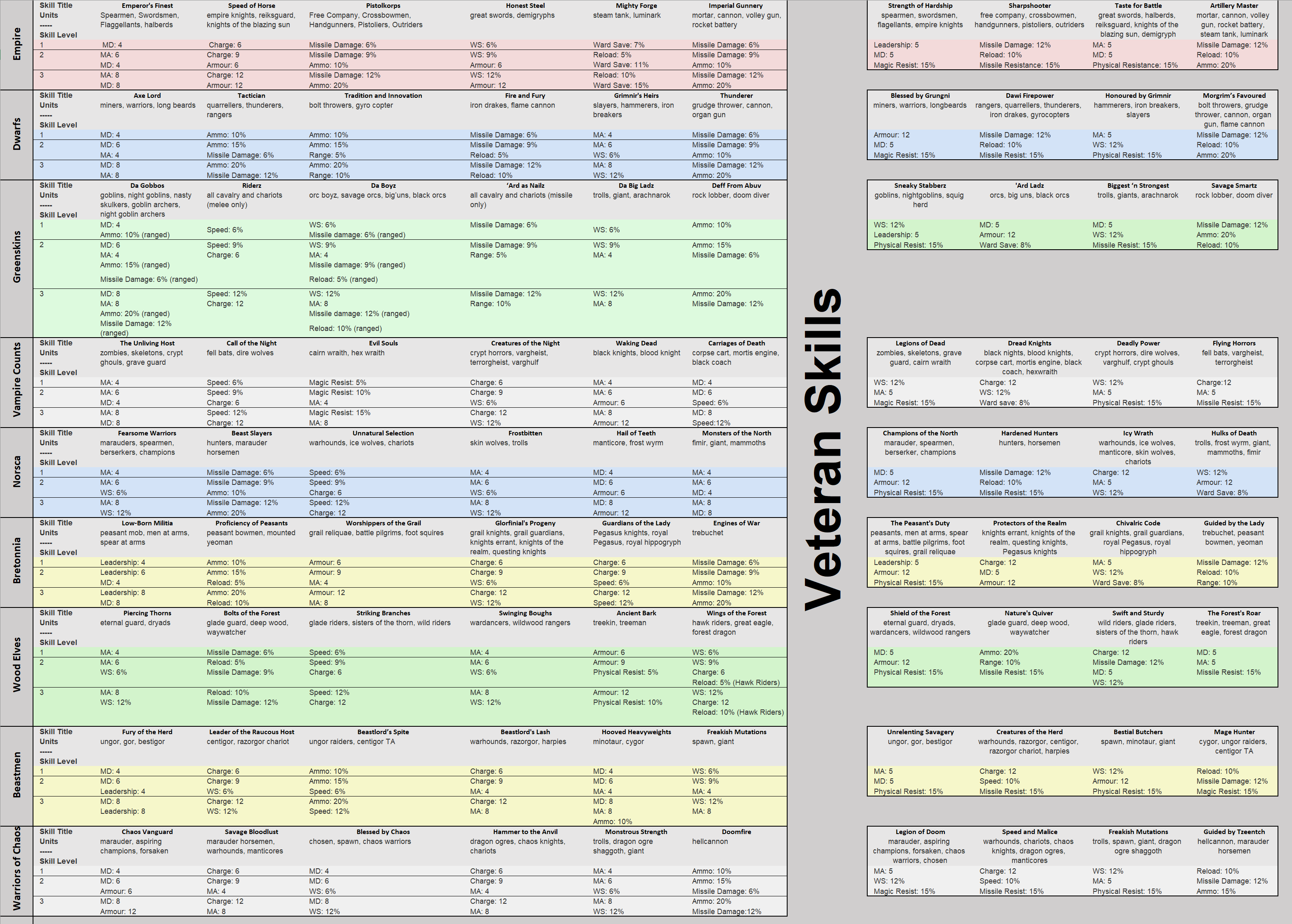 Miscellaneous Skill and Trait changes:
All Beastmen Lords now have the 4 skills: Crown of Horns, Slug-Skin, Rune of the True Beast, Man-Bane
Wood Elf red tree skills: The Eye of Kurnous, Sight Beyond Sight, Call of the Woods and Howl of the Forest have all been moved out of the red skill tree and are now separate from other army buffs
Increased Ghorst Unique skill unlock rank to rank 12 (up from rank 6)
Changed all Lord Personal Combat skills to be 2 tier skills instead of 3 (all factions) – (Heroes are unchanged)
Defeat Mannfred trait Moonslaker (-50% from Vampiric attrition) now only applies to Lords army instead of factionwide – so it can no longer be stacked to make all armies immune to Vampiric attrition
Karl Franz Leader of Men skill now +50% aura size (up from 25%)

Mount Unlock Ranks
The Character Ranks required to unlock mounts for Lords and Heroes have been standardised across the board. Please note, these are general Rank standardisations; certain characters may deviate from this standard for balance purposes.


Spectator Mode
Spectator mode now features some additional functionality:
- AI can now be added to the game.
- Spectator hosts can now invite players into their game using the invite button.
- Host spectator will now be able to use the spectator controls.
- Players now connected to spectator host can now see ready status of the host.

Campaign Changes and Fixes
Fixed a crash that could occur when a Vampire Coast faction owning Pirate Coves was destroyed.
Fixed a rare end turn crash.
Fixed a crash that could occur when Beastmen Brayherds changed stances.
Fixed a crash that occurred when a building was changed while a settlement panel was open.
Fixed a crash that occur when loading back into the campaign map from Tyrion's Sunfang quest battle.
Fixed a crash that could occur when triggering the Chaos challenger spawn when playing as Norsca.
Fixed a crash in multiplayer campaign that occurred when one player unlocked a Vampire bloodline when the other player was playing as a non-Vampire Count race.
Luthor Harkon no longer has +2 to pirate crew recruitment.
Count Noctilus' Lord of Dread trait is now applied to Rotting Promethean Gunnery Mobs.
Count Noctilus' -1 turn for Necrofex Colossus recruitment now applies when recruiting via Noctilus's ship and global recruitment.
Khazrak's +3 recruit rank for Bestigors now correctly applies factionwide.
Malagor's diplomacy bonus with other Beastmen is now +30.
Morghur's -60% upkeep for Chaos Spawn now correctly applies.
Morghur's Shadowgave trait now gives +8 melee defence rather than melee attack.
Orion's 20% upkeep for cavalry now correctly applies.
Fixed the following factionwide effects not applying to Ship armies:
- Harkon’s Man-o-War skill: +1 recruitment rank for Vampire Fleet Captains
- Noctilus’ Master of the Dreadfleet skill: +2 Lord recruit rank
- Cylostra’s Conjuration Through Hate skill: +2 recruitment rank for Mourngul Haunters
- Pirates’ Rest building effect: +1 Lord recruit rank
- Fleet Enforcement Admiral Office position: +3 recruit rank for Heroes and Lords
Exhaustion now correctly applies when establishing a pirate cove with a hero.
Vampire Coast lord skills that require unit rank 7 now apply their effects correctly.
Vampire Coast army skills should now apply correctly to Regiments of Renown.
Gunnery Wight's Gunsight skill now increases missile damage rather than weapon strength.
The Converted, Centuries and Command technologies for Vampire Counts now correctly apply their bonuses when recruiting via the Legendary Lord's ships.
The Converted technology now provides +5 tank for heroes recruited via a Legendary Lord's ship.
The following Greenskin technologies now also apply to Savage Orcs: Betta Arrer ‘Eads, Beasts of Burden, Black Orc Bellow, Betta Bowstrings, Massive Choppas.
Vampire Fleet Captain skill Kidnapping Assault Garrison action changed to Assault Units.
Vampire Fleet Captains now have The Hunger ability.
Bone Giants now gain buffs from Arrows of Asaph skill.
Blood Dragon skill Ordo Draconis now correctly reduces Blood Knight recruitment time.
Removed hidden duplicate skills for Von Carstein Bloodline Lords.
Vampire Counts tech Serve in Life or in Death now correctly gives +15% income from Repression buildings.
Lokhir Felheart will now be immortal if confederated.
Wurrzag no longer has +30% upkeep for Savage Orcs after confederating with him.
Black Arks will no longer lose their buildings upon defeat in battle.
Sisters of Slaughter can now be recruited from Black Arks.
Capturing or sacking a region with the Third Book of Nagash will no longer spawn a sea storm in the region. A sandstorm should spawn as expected.
Norscan technologies Blockading the Vampire Coast and Secrets of the Deep now use the correct icons.
Fixed a Bloodkisses exploit that allowed rapid generation.
Added Non-vampiric attrition immunity to Sylvanian Crossbowmen and Handgunner units.
The following Beastmen factions (and their associated Brayherds) now have Chaos Wastes attrition immunity: Blooded Axe, Manblight, Ripper Horn, Shadowgor, Skrinderkin, and Stone horn.
Fixed attrition immunity for certain attrition types when in stances.
Reduced the public order penalty when capturing a settlement on easy difficulty.
Fixed certain High Elf Mage Hero mounts not equipping in campaign.
Prophetess now correctly gains her Royal Pegasus mount.
Damsel Barded Warhorse skill has been removed.
Removed links between any mount skills that had them.
Fixed various instances where sea encounters could spawn on land or could not be attacked.
Fixed an issue where treasure maps could point off the map.
Fixed an issue with one of the treasure hunting puzzles having two solutions.
Puzzles will now display correctly when playing in colour blind modes.
Adjusted the Skaven and Dark Elf loyalty dilemmas to trigger less frequently.
An event message is now received stating that the treasure hunt failed when lords and heroes are unsuccessful with their attempts to dig for treasure.
The Amanar Rises event message shown after completing the campaign will now have the appropriate text displayed within the event message.
Fixed a rare instance where event names could be renamed when changing resolution.
Sartosa and The Awakening can no longer be upgraded to tier 5 when occupied by Wood Elves.
Fixed an issue where the Vampire Fleet Captains provided in level 3 garrisons would not have their spells.
All factions now have a garrison in Galleons Graveyard.
Athel Loren now has a garrison when owned by Dark Elves or Tomb Kings.
Skavenblight and Hellpit now have garrisons when owned by Bretonnia.
Bloated Corpses should no longer grant kills without dying in the autoresolver.
Fixed an issue whereby armies that spawned would sometimes not interact correctly with loyalty, certain effects and offices correctly.
Beastmen and Chaos should no longer be able to occupy Albion.
Galleon's Graveyard can no longer be flooded or raided by Beastmen.
Vampire Coast ships in encampment stance on sea will no longer show models that should be limited to encampment stance on land.
Skin Wolf Werekin and Shaman Sorcerers will no longer show as Exalted Hero and Chaos Sorcerers in the Recruit Hero screen.
The Red Duke now displays animations correctly on the campaign map.
Cylostra Direfin's porthole should now display correctly on all graphics settings.
The objective arrow will no longer show as a yellow square when the diplomacy screen is open.
Pirate's Rest now correctly shows +1 Capacity for Gunnery Wights on the building information panel.
The price of pirate cove buildings now displays correctly.
Kemmler's -50% upkeep for Necromancer heroes now works correctly.
The Lahmian Bloodline -50% upkeep effect now correctly shows on the amount shown on the hero's information panel.
Various text and typo issued fixed.
Music on campaign will trigger more responsively to campaign actions.

Battle Changes and Fixes
Fixed a crash that could occur when a player tries to connect as a spectator to an ongoing battle and then trying to host a battle afterwards.
Added Battle of the Eternal Tides map to Custom Battle.
Cylostra Direfin's Slaughterer of the Deep ability now works correctly.
Female Vampire Fleet Admirals now have Skirmish.
Female Dreadlord animations should now play correctly in the Mengil's Manflayers rogue army.
Fixed a large number of cases where deployment zones were the wrong way around.
The buildings outside of the playable area in The Awakening siege map will no longer float.

Misc Changes and Fixes
Improved total memory allocation use when using DX12.
Various localisation issues fixed.
Capitalised the "I" in "Infamy" in the Race Attributes section for all Vampire Coast factions on the Lord selection screen, making them literally playable again.
Added port icons next to mentions of port in the help text.
The help text regarding how Lokhir Fellheart acquires Black Arks has been updated for clarity.