I found the actual problem with towers (its a BUG)

cool_lad Senior MemberIndiaRegistered Users Posts: 2,276
May 2019 edited June 2019 in Campaign & Battle Bugs
It seems like the only sort of towers that are actually an issue are the perimeter defense towers placed on minor settlement and resource towns. These towers, unlike the other kinds are far too powerful for the following reasons:-
1. (BUG) The damage on these towers specific is apparently extremely high; about 1000 AP damage to be specific; this means that they do massive amounts of damage and have an ungodly amount of DPS. Fixing this should solve most issues with these towers.
2. They combine a dual tower layout with higher range. The towers in cities are either single towers with high range or dual towers with lower range. I think that a slight DPS nerf (after fixing the bug) to below that of the city version may be in order, since as things stand, these towers have the best of both worlds; being double towers with high range.

The other towers are fine and not in need of nerfs; it's just these bugged ones that seem to be the source of the issues.


Edit: added in image showing the issue for clarification. Please note the bottom 2 entries, which present a massive anomaly when compared to the other kinds of towers and are the prima facie source of the issue. 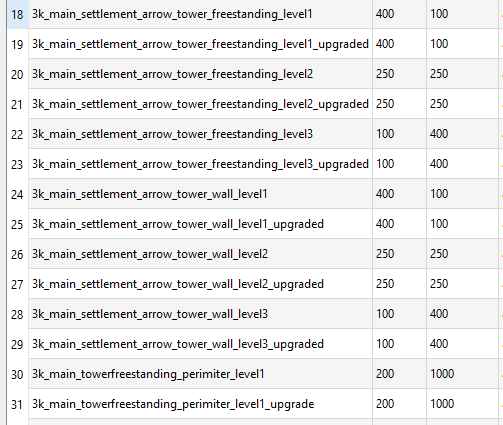