DoW units that were left on the Drawing Board

Ol_Nessie Posts: 3,232Registered Users
June 2019 in General Discussion
This is just some idle speculation to pass the time. I think DoW's prospects are pretty low at this point, but what's the harm in speculating about units that'll never come (besides even more disappointment when they inevitably don't show up)?

So a recent thread sent me back to look up DoW regiments and I stumbled back across the 6th edition WH army books which listed DoW units as Rare choices in the army list. There's a few regiments which are mentioned in those blurbs which were never actually implemented, so the door is kind of wide open to imagine what they might have looked like. For reference, here are the sources for what I'm talking about: 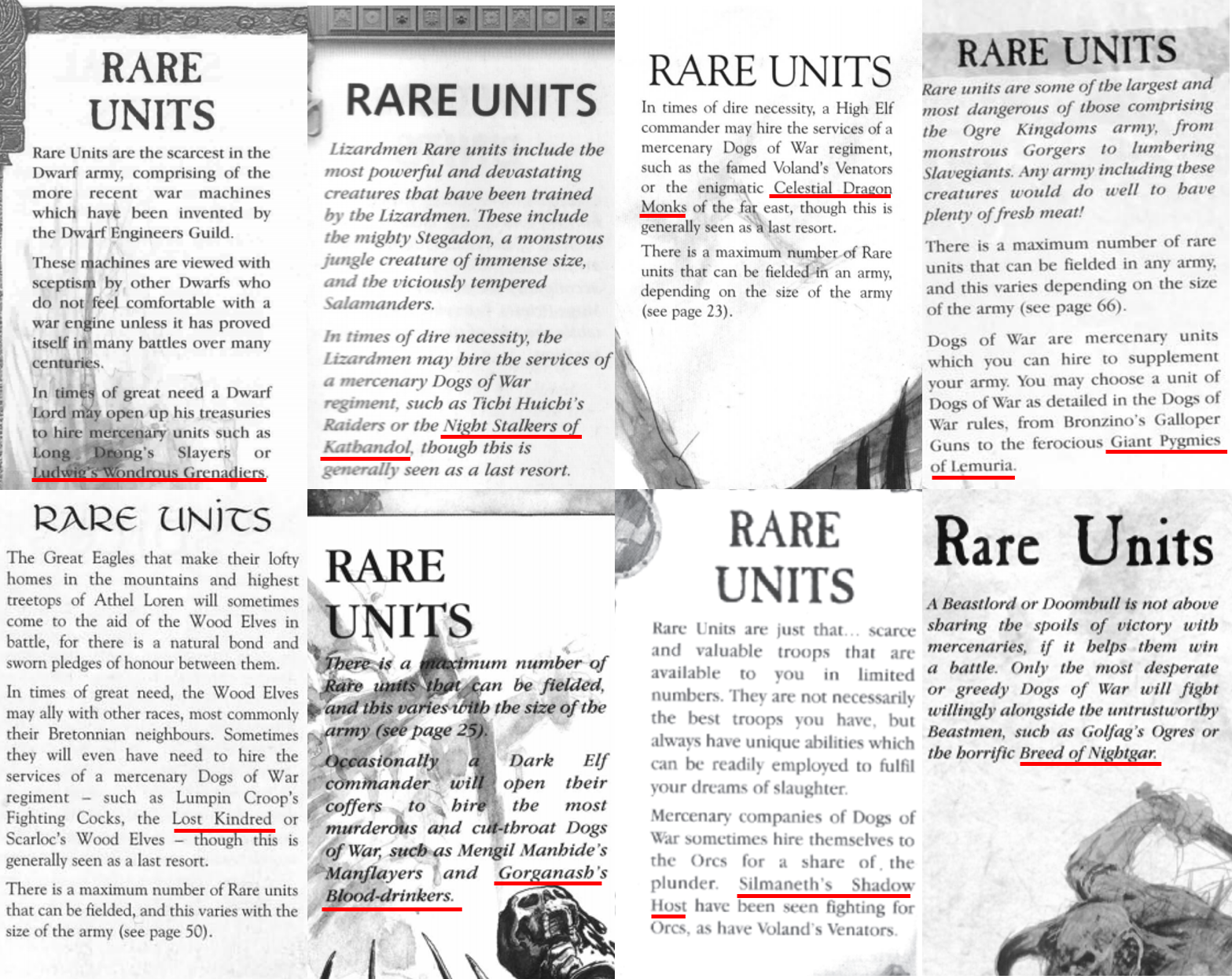 With that said, here are some ideas on what these units could be;

Celestial Dragon Monks (From HE army book)
This is probably an early reference to Cathay, so they'd likely be themed along those lines. Maybe they could be a unit with a bound spell from the Lore of Heavens (hence "celestial"), or perhaps they're just warrior monks like Shaolin Monks in the real world.

Ludwig's Wondrous Grenadiers (From Dwarf army book)
Ludwig's name suggests an Imperial origin, so they could be something along the lines of dismounted Grenadier Outriders. There's also a blurb from the DoW army book that could be used to augment them; Leonardo's Sphere of Alchemy. This was basically just a bomb that he could throw, but I see so many other uses for it. They're called the Woundrous Grenadiers, so perhaps they could have an ammo toggle so they could throw smoke grenades to impede the enemy's vision or flash bangs to stun them, hence their "Wondrous" reputation.

Gorganash's Blood Drinkers (From DE army book)
Gorganash sounds like a Vampire name and they're called the Blood Drinkers, so they're probably a unit of Vampires in some capacity. They'd probably need to be distinct from Blood Knights and Depth Guard, so maybe they could be a unit of Strigoi Vampires as monstrous infantry.

Breed of Nightgar (From BM army book)
This one is a bit vexing. It comes from the BM army book (the references above usually suggest units that would be thematic for the army book race) so they're probably based on a "destruction" race, "breed" suggests an animal or beast theme, and Nightgar certainly sounds Beastmen-ish. Beyond that though, there's no other indication for what they might be. What do you think they are?

Night Stalkers of Kathandol (From LM army book)
Again, another vexing name. It comes from the LM book, so they're probably a unit from an "order" race or at most "unaligned." "Kathandol" might be a play on Kathmandu in Nepal, so maybe they're an Ogre unit from WH's "Not-Himalayas"? Or maybe they're another LM-based unit like a unit of Chameleon Skinks or something. I'd be interested to hear other interpretations

Silmaneth's Shadow Host (From GS army book)
Silmaneth certainly sounds like an Elf name, yet they come from the GS book so perhaps they're a DE-based unit. "Shadow Host" suggest they're probably a Shade/Shadow Warrior-like unit as sneaky skirmishers.

The Lost Kindred (From WE army book)
This is pretty clearly WE regiment due to the use of the word "Kindred." Maybe this unit is a reference to the Wood Elves who live in Laurelorn Forest.

Giant Pygmies of Lemuria (From OK army book)
Wouldn't Giant Pygmies just be like, average sized people? In any case, the name is probably a bit too outdated for our time so it might not be worth speculating on. On the other hand, in our world Lemuria is a legendary place that supposedly resides in the Indian or Pacific Ocean, not unlike the legends of Atlantis. So the unit might be some kind of "Lost World" type thing.