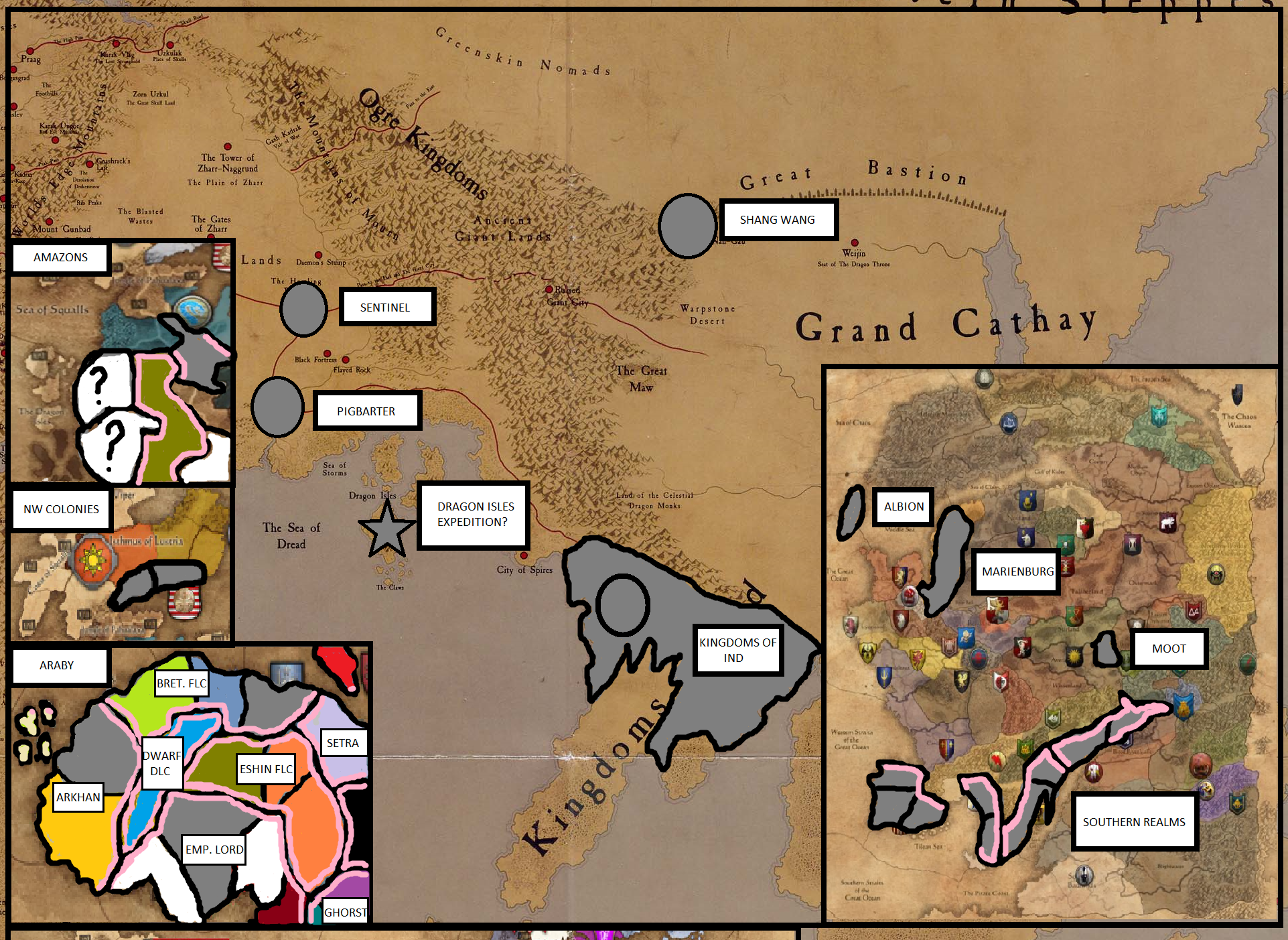 At first I didn't want to believe it, but dam... Southern Realms (DOW) could easily be a launch race and if not is virtually guaranteed to be a race DLC or pre-order bonus. The amount of presense Southern Realms has just in its current in-game members (Tilea,Estalia, Border Princes, New World Colonies) is insane and made even greater when you consider that most of the these minor factions are the inhabitants, providers, or recrutiers of the DOW.

Southern Realms and DOW COULD technically be two races but for the for the purposes of this thread, I will be treating DOW and Southern Realms as the same faction however there is actually enough OFFICIAL lore with the DOW and the minor factions to make them independent factions.

I have a few pictures with factions using there in-game colours for most part. White= ruins. Pink = Province border.

Southern Realms is big in game 1 and has potential for more?

As you can see we already have ALOT of territory to manage however there are several other potential additions from Game 1.

Since some of the provinces are 2 settlements only, other cities like Trantio, Pavona, Remas and Verezzo could be added aswell.

Marienburg
Lore: Marienburg official bribed itself out of the Empire and has a large concentrations of mercenaries due to tis status as a
colonial power. It is also inhabited by a wide area of races with Nipponese and Ind having districts within the city.
Marienburg also has a presense in Nippon and Cathay as traders.

In-game:Wasteland expanded to 4 settlements (3cities+1fort) which could be planning for DOW introduction.
Introduction of new enemies within Empire such as goblins+wood elves to break up "Empire clone block".
Slyvania can be returned to Empire control so another faction starting with control is not a issue.

Halflings
Lore: Halfings were OFFICIALLY part of Empire roster and only add "hot pots" and "archers". Presense only in the Moot and 1
small community serving ogres in Mountains of Mourne as servants.

In-game: Same reasons as Marienburg in-game reasons.
Huntsmen fufill the role of stealth archers for Empire which is what halflings are famed for.
Potential role in Southern Realms as stealth archers/scouts

Albion (UNLIKELY)
Lore: TBH don't know much about these guys except they apparently have fimir, giants and creatures based no North
Mythology. The fact that Norsica has fimir as a unique unit also make this unlikely, although not impossible .

In-game: Albion expanded in game
Owning faction (Verrglings?) owns six factions as a place holder?
Nakai being there alreadys suggests its not a starting location (CA: 1 Lord per province approach) BUT could still be
used to add giants/ maybe fimir

I would just like to finish this off by the saying Kislev's Gryphon Legion, while sworn to return to defend Kislev in times of need, is also a mercenary unit serving in the DOW.

New World Colonies - potential for a crossover but probably placed there as trade partner that you can't confederate with. There is however much better alternates.

What is known about Araby: Not planned as a race for foreseeable future
7 active settlements, 3 could be used for other things. Arkhan=Palace. Empire DLC?=Suddenburg.
Bretonnian FLC lord?
Divided land with no single government
Araby soldiers frequently join DOW

Note:
I would just like to say that Sudenburg in the game is where Antoch (major ruined crusader settlement). Suddenburg should be further south near the "Plains of Tusker (Dune Kings) settlement.

How DOW could help Araby. Adding several DOW settlements could help represent the divided nature of the land
Several Araby themed units would have a legitimate reason to be included in game
Other DLC/FLC options have a high chance of using the area and its normally 1 lord per province
Theagean Errantry and Knights of the Flame could be moved to Sorceror Isles (new crusade) or
Copher, regarded as the most intendent state.

Lore: Tribe of zealot women with priestesses present west of Txalltlan but no specific settlement given.

In-game: No changes but suspicious gap left in north-west of Lustria in area associated with Amazons.

Darklands, Pigbarter and the Sentinel

Two trading posts in the darklands where Ogres, Gnobblars and humans live together. Ogre merceneries and Gnobbalrs can be purchased form here. Just want to say that Pigbarter also has pig-jousting xD.

Not much to say with this, Tilean explorers go into the jungle fighting the feral lizardmen (lizardmen without a slann).

Settlement (fortified) along the silk road (northern path),north-west of The Grand Bastion and East of Mountains of Mourne. Robbio and Ricco Tilean expedition encountered it and guard it ever since to maintain the trade route with Cathay. This also gives DOW a reason to have Cathay style units and since its location is not SPECIFICALLY shown on any map, it could be placed further west if they don't do Catahy.

The Kingdoms of Ind

South is already populated by beastmen, vampire varients and even has a potential wood elf start because of world roots.
The Kingdoms of Ind (multiple kingdoms) don't have a army list however they are said to be the fantasy version of India and so could have sabre styled infantry like Araby. There are also Clestial Dragon Monks who train in the mountains xD. The Kingdoms of Ind also trade with Araby and are far enough west that you could include them even without dealing with Cathay. The tower of the sun which is right next to Ind is also ready in the Vortex campaign near Tor Elasor.

How they could work

Simple, you start with a solid but fairly basic army

To unlock the elite DOW units, you do a quest for a minor faction e.g. (DOW Amazons). After you have done the quest, you are allowed to recruit 2-3 of there units. This could also be used as a confederation mechanic.

I hope that after reading this and seeing you like me are convinced that the Southern Realms/ DOW actually stand a very good chance to be the "good" race for Warhammer 3. It has the potential to include a lot of fan favourite units in a way that is true to the source material BUT has the potential to have new original units added aswell.

The main features of past launch races have been...

Southern Realms (renamed DOW) has all of these and blows all the competition out of the water by a mile.