The Master and the Father

Cortes31 Registered Users Posts: 1,047
May 2 in General Discussion
Welcome to my idea of what will be the last remaining LP for Warhammer 2. Not saying it will be like this but I think it has not the worst chances of being in.

Anyway, I present my Lord Pack: 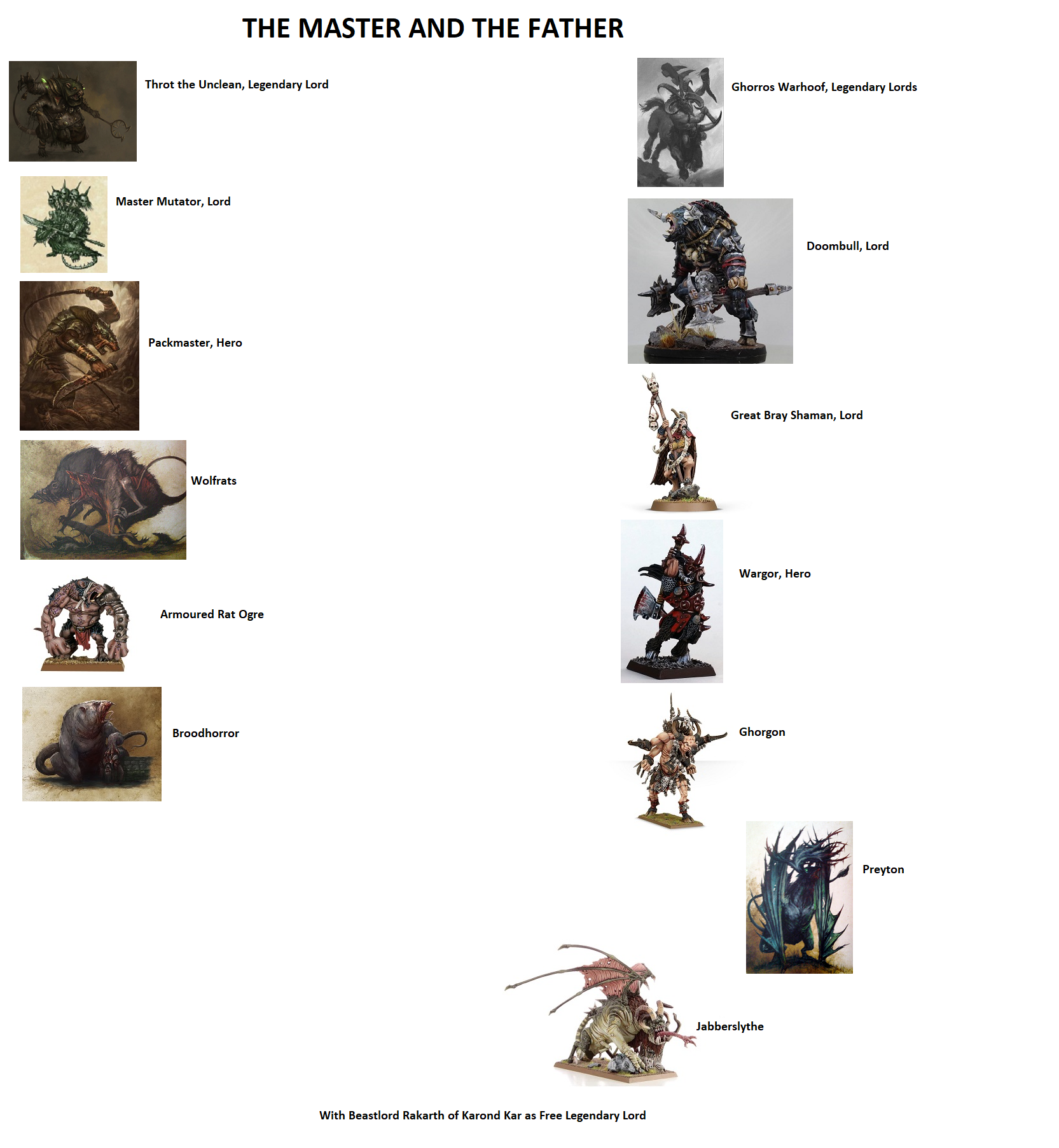 Now, I can imagine that this constellation raises some eyebrows.

No Taurox
I know that many want the Brass Bull as next Legendary Lord for the Beastmen but I have decided to take Ghorros because of two reasons:
First, I believe that the core line-up of WH3 will be Demons of Chaos as per armybook, Ogre Kingdoms, Chaos Dwarfs and, depending on the pre-order, either Kislev or Dogs of War. (Personally I hope for Cathay as the 4th race but that is a different matter) For Demons of Chaos that would of course mean that only two of the four gods will be represented with a Legendary Lord from the beginning and I would go with Tzeentch and Slaanesh. Both already have associated lords playable within the game were neither Korne or Nurgle have shown any real presence so far, which is the reason that I believe that they will be DLC.
Second reason is my believe that BM, once everything is done and dusted, will have 6 Legendary Lords. 2 will be, for a lack of a better term, Chaos Undivided and the other 4 will each be devoted to one specific lord. Just throwing out some names now but Taurox for Khorne, Ghorros for Slaanesh, Morghur for Tzeentch (pretty sure about this one actually since he already has a skill connected with the Changer of Ways) and I say Slug Tongue for Nurgle.

Now this would, assuming everything above is right and the rework for Beastmen is properly done (what that means is an open interpretation for everyone, personally I hope herdstones will be some sort of settlement in the future, not counting obvious rework like tech tree and skill trees), lead to the point where BM are done and dusted with the exception of some god-dedicated work which could be done in some small reworks.
For example, once the Khorne DLC hits, BM get a FLC with Taurox, Khorngors and a small addition in the tech tree and the skill trees. Not more. Same for the Nurgle DLC.
As for Tzeentch and Slaanesh, they would get the stuff as soon as BM become playable in WH3 of course, but would be pretty much the same size. Maybe even a bit smaller, since the dedicated lords, Morghur and Ghorros would already be part of the game.


No Tuskgor Chariot
I do not like chariots that much in general and I do not see the point of adding another melee chariot. I prefer BM getting their big monsters.


Skaven and Rakarth
I will be honest, I do not care about Skaven. I do not really feel anything when playing them but I do like Beastmen. I just HATE hordes. They are my second most hated thing in the entire trilogy right now, right behind “no more races”. Anyway, I do like me some big beasts and Moulder is the last remaining clan with DLC quality as far as I know. Also Beastlord Rakarth is just a very fitting Free Legendary Lord for the theme of this DLC.


DLC for DLC and plans
Now, this is a bit of a problem for my suggestions, since CA said something along the lines of “we will not deny it but we also have no plans to do it”. Maybe they will do it, maybe they will not and if they do it, people WILL complain about CA being a greedy, lazy, money milking company.
Another problem (kind of and kind of not) would that Grace said they have 2 more LP planned but they did make this plan before covid19. Maybe they will decide to drop the LP after The Warden and the Paunch and jump straight to the pre-order.
Now, I wrote “kind of and kind of not” what I mean with this is that the Skaven-side of things could be easily tied to a crossover with WH3. I think Kislev or Ogre Kingdoms would be good candidates for this case. Also, a part of me is actually hoping they will drop the LP and jump straight to the pre-order which will be hopefully a race. The BM-side of things might be in a bad spot in that case, though. I just cannot imagine the big beasts coming in as part of FLC.


Warhammer 1 and the Vortex
The last point I will write about has something to do with the upcoming opinion that CA wants to make all core races of WH1 playable on the Vortex and something about wanting to upgrade every race. Now, lets just say that things will work out as I said with this LP, Eltharion VS Grom gets a WH2 FLL and what would this now look like?
On the Vortex we would have Empire, Greenskins, Bretonnia and Beastmen. No Dwarfs, no Vampire Counts, no Wood Elves, Warriors of Chaos and Norsca. And honestly I am pretty darn fine with it. There is no reason to turn every (core) race of WH1 playable in WH2. Not when, at least as far as Dwarfs are concerned, much better opportunities are waiting in the east with WH3 and depending on how the core line-up goes, I can totally see a X-DLC between Vampire Counts and Kislev in form of Neferata VS Ulrika Magdova. Bringing the rebellious daughter back in line or something like that.
That leaves Wood Elves, Norsca and Warriors of Chaos. Let me start with the last one first and say that I think that WoC are kind of in a similar spot to the BM, in terms of how the rework could be done. Probably a worse spot actually, since WoC have much more dedicated stuff then BM. So they might need a bigger X-DLC on their own but if they get something from every chaos-related DLC I think they will be fine. CA could also always decide to make god dedicated DLCs and give everyone (Demons of Chaos, Warriors of Chaos and Beastmen) something.
As far as Wood Elves and Norsca are concerned, I am not sure if their reworks should even include new Legendary Lords. I mean, Wood Elves only really need a rework of Amber, and Norsca, well, does Norsca need something at all? I mean, new Legendary Lords would be nice to have, no doubt about it and personally I am still waiting for a proper Wood Elf as Legendary Lord but by the end of the day I can actually go on without it.
Also, Vampire Counts got big rework and are still not playable so I doubt they will ever be part of Vortex.


And that is it.
"In brightest day, in blackest night,
No faction shall escape my sight.
Let those who think deniers are right
Beware my power--Faction Lantern's light!"

Everythime a faction/race is excluded from the trilogy, these games become smaller. RIP Araby and others.
Tagged:
Flag 3 · 3Like
«12»