How should DoW and Southern Realms be in TWW, maybe implementing Araby stuff - with POLLS

_Mad_D0c_ Registered Users Posts: 1,505
June 2020 in General Discussion
The ultimate DoW/Southern Realms (TEB) community questioning with several polls.
Imo they have so much potential, lore and stuff.
Very long post, so if you are only intetested in the polls, they are bold.

At first the most important and well known Characters are mainly from Tilea and Estalia like Borgio the besieger, Lorenzo Lupo & Lucrezzia Bellladonna (exceptions later down the post) but partly common for travelling. There are several options to have a multistart position like Malus, with origin settlement and colony (the former only in ME/ME2).

Poll 1: What should DoW/Southern Realms be in your opinion?
https://strawpoll.de/sc5e55d

1. Mix of DoW and TEB as their own settled faction with potentially very different sub factions.

With melting of DoW abd TEB we would have far more lore and stuff to work.
More exotic LLs, LHs and units are possible; while subfactions could easily get unique themes and exclusive units.
DoW/TEB has so much potential and fluff they need to be game 3 core faction or at least need DLC for DLC, because they easily could get up to 6 LLs.

2. DoW as mercenary system for existing factions and no own race.

Some seems to want them being only a mercenary system for existing factions rather than her own faction. Imo this would be a catastrophe and a really really bad solution for the game.
At first this will be watering down the uniqueness of every faction, because giving some of them the same unit options and possible solutions for their specific faction weaknesses.

I think this is unlikely, because TEB has a high focus on mercenaries over their standard troops.

4. Something else
If you have another idea what they could be, tell us in the comments.

Mechanicwise, 3K seems to receive a mercenary system which could fit very well as base of an exclusive DoW/Southern Realms faction mechanic.

Link to two threads discussing this:

Imo some of the old DoW lore should be retconned, especially a cut for not order/neutral race units in their roster.

I think even when DoW is clearly neutral, GS and chaos worshippers (including dark emmissaries of Albion their followers) should be cutted out, Imo this lore is outdated and not fitting to the actual world. Beorg Bearstruck for example would be better as norscan LL than DoW. And Undead units/mercenaries should only availlable for the Borderprince Gnashag because hes a strigoi.
Asarnil Dragonlord and Ulther Stonhammer and even arabian and not undead pirates LLs /LHs and their units are possible. Possible additions of arabian stuff further below.

Rather include them in more fitting factions, in case for Bearmen and Beorg Bearstruck in Norsca.
If Gnashag will be LL, he should be the only who can recruit undead (standard units or former undead DoW RoR).
I prefer this one.

2. I want them all: CD, norscan, undead and GS mercenaries, with the restrictions (animosity) from the old lore

TEB as neutral could recruit all of them in the armybook if I am right.
With potential animosity mechanic when you recruit for example GS and Dwarf mercenaries in one army or the one cant be recruited / exchanged if the other is in the army.

LLs and LHs for DoW/TEB

Imo the best would be to give them only human faction leader. If they pick the unlikely choice of Gnashag, he should be the only exception, but I would prefer Ushoran/Vorag for VC.
Not humans (generic and named) should be only heroes and LHs (Asarnil, Ulther, Long Drong)7
While there could be more than one Amazon unit and even Anazon hero, there should be no amazon subfaction and LL.

Poll 3: Do you want only human LLs for DoW/TEB?
https://strawpoll.de/zd67b7e

1. Only human LLs, dwarves and Elves as generic heroes and LHs
2. Give me not human LLs

CA wil surely be aware to let them still have weaknesses and not be overpowered and preserve the asymmetric design of all the factions.

Giving mercenaries to the existing factions would be a huge failure, it would destroy their asymmetric design and style
Some of you hope to see neglected races show up as DoW mercenaries.

One big problem of the old armybook converting to higher editions and TWW is missing high tier stuff and monsters, especially faction unique monsters. The latter would be the most appealing for selling them.
They need to be highly reworked and need high tier stuff created by CA, like hippogryph knights were for Bretonnia.
Those monster units and the more exotic units would be the main thing to make them unique and apart from Bretonnia Empire and potential Kislev without taking to much from other races.

Imo Araby is one of the best candidates for this and can surely get some of their stuff.
By Albion I would be very reluctant, if ever only the white emissaries the more ordered Albion inhabitants.
Albion giants could work as rock throwers like cygor?

Poll 5:
Do you welcome the Marienburg Landship and or Albion giants as a standard high tier unit for DoW?
https://strawpoll.de/w86ggy8

While some Amazons would be very welcome to DoW, especially a non-Amazon LL who will start in/near Lustria can more easily recruit them. When Cathay will not come as own faction some of their units and one from Nippon are welcome too (In very old lore I think Dragon monks and Nippon samurai were potential DoW mercenaries).

SeanJanquoi has really good ideas for this faction. Some think the old DoW roster are only RoR for Southern Realms, but this is made for the army size of tabletop and would be bad for TWW. Here most of them should be made in regular units (some of the named regiments could be the RoR version of them).

The main army is based on ancient greek inspired pike infantry (phalanx), this should be expanded. A mix of conquistador and ancient greek/rome style would be very appealing to me and different to the other human races.
Those pike/halberd infantry could get unique formations like bretonnian cavalry.

If we never see Araby as their own, one arabian LL (Fatandira, Mydas or Golden Magus?) with some more exclusive arabian units would be very fitting for DoW. It would be even very lorefull that they fled the overrunned araby. Especially war elephants from araby (and/or Ind) could easily shovelled in as high tier standard unit recruitable for every DoW lord. Look at Hannibal in anciant karthago, DoW/TEB is highly inspired by the anciant greek/rome so it would fit very well and would be very good for marketing the faction.

Possible units from Araby for all DoW subfactions:

Arabian master assassin could be perfectly the assassin hero for all DoW.

No camel sharpshooters, djinns and flying carpets because of to much work for a lonely subfaction. Maybe carpets only, if the LL will get it as mount option. 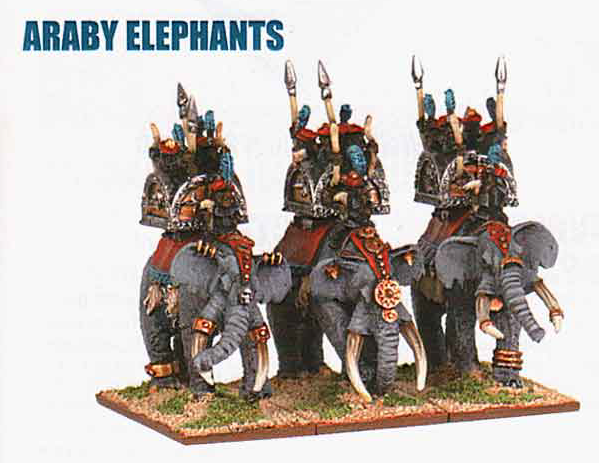 Clearly they should be smaller than mammoths but a bit bigger than our RL elephants could be possible. Which war elepant variants do you can see? With howdas archers/guns? How many elephants should be in one regiment?