Daydreaming: One way that we can balance Cao Cao after Chibi and make it more interesting.

Ostubaf_Catto Registered Users Posts: 164
September 2020 edited September 2020 in General Discussion
With Nanman DLC is behind us and I want to say about the future of Chapter Pack. We know that Guandu is next but I want to look further into the future.

I saw many concerns that Chapter Packs after Chibi will not be much interesting and very unbalanced because of how powerful Cao Cao would be. He will hold 25% of the map and it will be painting the map right from the start. Like in this example 209 Cao Cao. 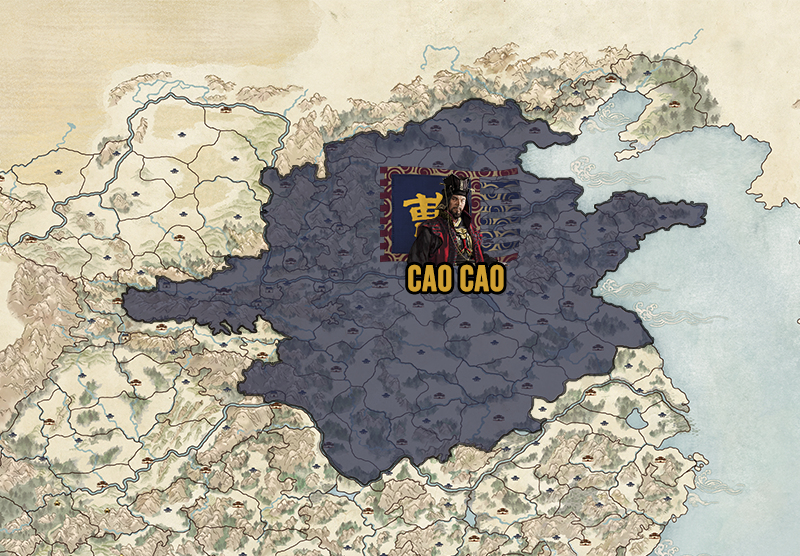 The obvious solution is to give Cao Cao some generic vassals like the Han Empire who will share his territory. However, that will not solve the problem that Cao Cao has so many characters in his court that it would be more pain to keep everyone happy.
In my opinion, the best solution is that “SPLIT CAO CAO FACTION” or making some of Cao Cao famous generals to be playable factions that start as Cao Cao’s vassal, so I pick up 3 of the Cao Cao’s well-known general roaster and make them into 3 new playable factions.

In this hypothetical Chapter pack, I will use 209 as the template, so we will start right after the event of Chibi (Red Cliff). However, since there were so many transfers of Cao Wei generals during 209-215, the characters roaster for each new faction is pretty hard to pin down so for gameplay, set up and cool factor, some character might not be in the right place at the right time and I took some creative liberty to make this hypothetical chapter pack. 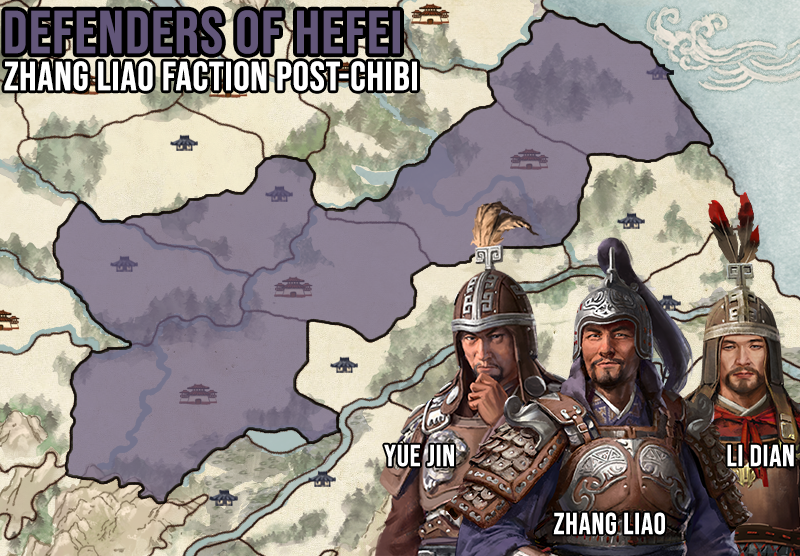 Zhang Liao was one of the most skilled and famous generals of Cao Cao. He followed Cao Cao into many important battles and had many good deeds under his name. Now he must is tasked to protect the southern front from the enemy without and within.
Notable Characters Initial Situation
Zhang Liao might start with a strong stack in Hefei but he will also face with the uprising in Shouchun and other surrounding cities. He has to put this rebellion to the end quickly before Sun Quan’s inevitable invasion into the central plain happened. His starting economy might be poor because he has low-income counties but I think an event like Cao Cao sending supplies or something will help with his economic problem.

Mechanic
My take for Zhang Liao’s mechanic would be focusing around building his fearsome reputation among his enemy to strike fear into their heart and inspire our troops and generals. With each victory on the battlefield, his reputation will grow and give him more bonus. 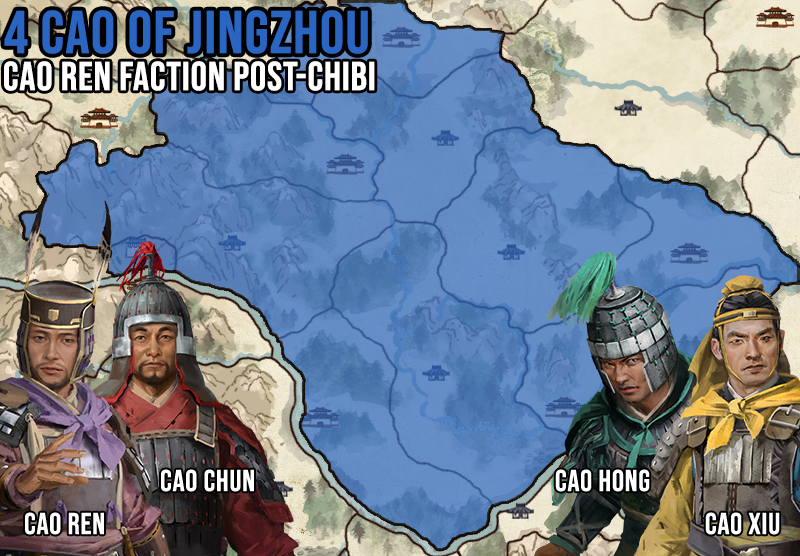 Cao Ren, the relative of Cao Cao, is a talented general under Cao Cao. He is entrusted with the duty to defend Jingzhou. With the traitors Sun-Liu is marching toward Jingzhou, can Cao Ren and his brave generals do this duty?

Notable Characters Initial Situation
Cao Ren’s starting position is the strongest and might be the hardest out of the three. Xiangyang, Nanyang and Runan are rich cities with a jade mine, an iron mine and a toolmaker. However, he will lose some of his territories early on since Liu Bei’s and Zhou Yu’s force start within Nan commandery. Cao Ren must quickly build up the defences and try to stall Sun-Liu army then wait for an opportunity to counterattack.

Mechanic
I imagine that Cao Ren will be all about defending and stall enemy. He might have unique Military Infrastructure building to reflect that. 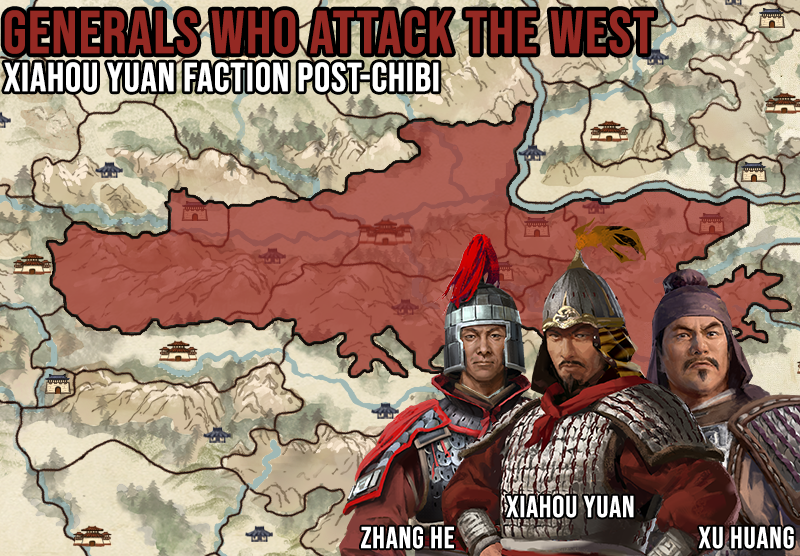 Xiahou Yuan is one of the longest-serving generals under Cao Cao’s court. He is brave and bold and crushes any enemy of his cousin. After the defeat at Chibi, he is now in command of the western front where the threat of Ma Chao and the Qiang start to be apparent once again.

Notable Characters Initial Situation
Xiahou Yuan’s starting location is solid. He has a good economy due to jade mine, silk trader and trade port and easy-to-defend position. That being said, his enemies also pretty strong Ma Chao and Han Sui in Liangzhou will eventually come down to fight you. Moreover, Zhang Lu of Hanzhong and Liu Zhang of Shu are also right below you.

Mechanic
To be honest, I haven’t thought much about his mechanic but I imagine that Xiahou Yuan will be the most aggressive out of the three.

Cao Cao and his Trusted Generals. 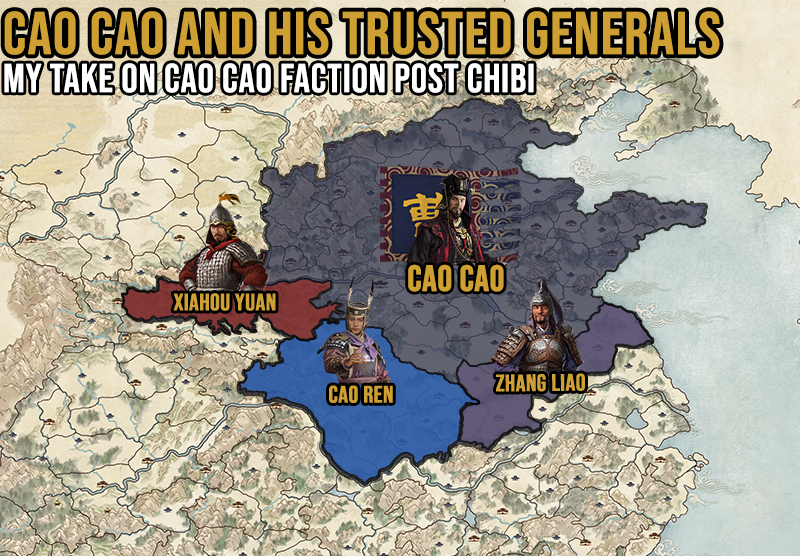 With this, we will have 3 new factions to play with. Cao Cao’s territories are smaller and easier to balance (by adding more generic vassal like Ham Empire into Cao Cao’s northern territories too since I assume that by the time this Chapter Pack was released we would have the Northern Expansion Pack). Some people might be worry that with this faction split, Cao Cao’s court would be empty. I will ensure you that Cao Cao will still have a lot of cool generals under his banner. To name a few Etc.
I think that this idea of SPLIT THE FACTION can be something cool for CA to make in future Chapter Pack. I hope CA would see the same. With that, I want to say thanks for reading and I hope you enjoy my theory. Please feel free to comment and discuss your idea further in the comment section.
Post edited by Ostubaf_Catto on September 2020
Tagged:
Flag 6 · Disagree Agree