Blessed Spawnings suffer from a series of problems that make it a boring mechanic, mostly that they are completely random, give the player no agency, and don't include DLC units.

A simple system that can be adapted to all DLC units is the sacred spawnings mechanic from tabletop which allowed you to specialize your units with blessings that reflected the strengths of each old one. You could even field a sacred host where the whole army was themed around one god. It allows you to customize your armies based on themes like scrap,tree aspects, runes or the marks of chaos in a future WoC update do.

CA would have to create a blessing for each old one giving bonuses that could be fitting for most units, below is a list of possible blessings inspired by other suggestions, mods and the lore of each god.
For example, tzunki lizardmen are more quick of reflexes than other lizardmen and have affinity to water, so they get more melee stats and aquatic. Chotec lizardmen are fueled by the energy of the sun and thus have flaming attacks and perfect vigour.

Ideally each spawning would have their spine painted a special colour just like in the lizardmen army books, but since we haven't gotten an army painter maybe changing unit colours dinamically is actually too complicated, no idea. 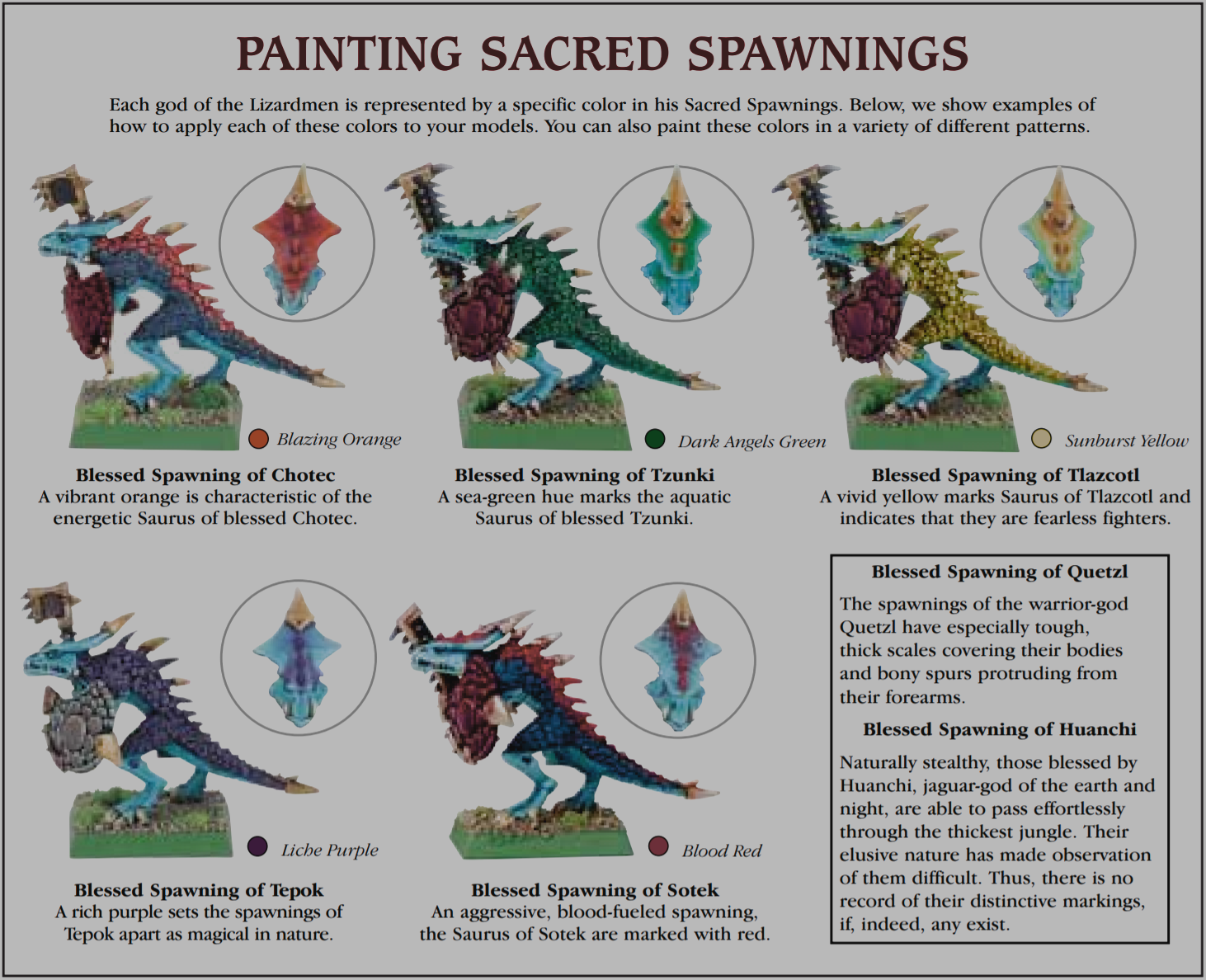 The only unit in the whole lizardmen roster that I think completely overlaps with these bonuses are the red crested skinks, which already have the bonuses of the blessing of sotek.

I haven’t given numbers for the stats because that’s a matter of CA balancing. On the whole I consider them balanced since all of them are worse than the current perfect vigour+ extra hp combination for the best LM units the current blessed spawnings offer.

- Blessing of Sotek: Frenzy and poison

- Blessing of Huanchi: Strider and stalk


Given this blessings there are a number of ways it could work to make the player gain access to the blessings.

In lore lizardmen don’t control when a new spawning happens or what blessing it has, but the old ones provide them with the ones they need the most, the mechanic should reflect that.

All lizardmen factions could have available missions like Oxyotl has, to choose from. But instead of being rewarded directly with units to recruit at any time, players would get “prophecies” of a new blessed spawning after completing one of these deeds of the old ones.

Missions shouldn’t be random, but reflect the campaign map and the lore. Lizardmen get spawnings when at war or when big trouble is coming, so missions should have a number of predictable triggers:
Being at war with a faction.
Having a rebellion.
Strongly negative diplomatic relations which forecast a war.
A faction owns part of a province you own.

Alternatively they could just trigger each few turns, but the timer needs to be much lower than it currently is in that case.

After beating the mission, next time you recruit a unit you would get asked if this spawning is the prophesied, and if you agree it gets the blessing.

You’ve chosen the empire mission, attacked their settlement and gotten two prophecies. Next time you’re recruiting a unit, you get asked (or have the possibility vi some interface) if they’re blessed. In this case you decide the next two chameleon stalkers you recruit are blessed by quetzl.

Since they are prophecies, you shouldn't be able to store them forever. They could last maybe 15 turns, which is a reasonable time to recruit new units while making sure you don't keep them until you can recruit all T4-T5 units.

An extremely simple system would make it so that every time you recruit a unit there's a % chance it gets one of the blessings. The % could be dependent on both the geomantic web level and the strength of your current enemies, incentivizing tough wars(based on a system like the waagh trophies). Every race opposed to the great plan (so, all of them if the player feels like it) would have a bonus for a certain blessing. You’re defeating skaven, you get more blessings of sotek, beastmen huanchi, etc. This system solves the DLC problem and agency but is still completely random.

Another simplistic way would be to make it a simple scrap style upgrade paid for with a new lizardmen campaign currency like all the other races have.

Dread saurian had their own blessings on tabletop, I’ve taken the list from a mod because I don’t have the monstruous arcanum.
Blazing Configuration of Chotec - adds Flaming Attacks and Fire Resistance
Shadow Rebus of Huanchi - adds Stalk and Missile Resistance.
Golden Shroud of Tlazoctl adds +15 Melee Defence and the Golden Shroud of Tlazcotl ability (damages undead and daemons within 50 meters)
Quetzl's Flawless Heartstone - adds Unbreakable, +60 Armour and reduces Speed by 25%
Tepok's Crystalline Eye adds +75% Physical Resistance, Strider, Magical Attacks and reduces Armour by -150 and Leadership by -10
Given how they only affect a single unit, I think they should be a scrap style upgrade, paid for in gold or a new lizardmen resource.


If no new blessed spawnings are coming ever:


CA has invested in the reskins for the current blessed spawnings and may not feel like adding more.

In that disappointing case they could tie the current spawnings to having complete provinces of Lustria and the Southlands, just like the empire elector count units work. So, for example, to get blessed solar engines you need to own the complete Hexoatl province and either use Old One Energy or a cooldown like the empire units have.


What do you think? Seems a worse mechanic than the current one? Too much of a power down from the current blessed saurus random gift? Any suggestions on how you would make it work?

Justice for the scalies!