EmeraldThanatos Registered Users Posts: 2,840
October 16 edited October 16 in General Discussion
Almost a year ago, I made a post about the rosters and dlc I thought the Ogre Kingdoms and Chaos dwarfs would have in wh3.
10 months later and Ogres are all but confirmed to be the preorder race for WH3. I thought it take this opportunity to revise that list, as the preorder reveal is likely to happen in a few weeks. Without further ado, here's the list: 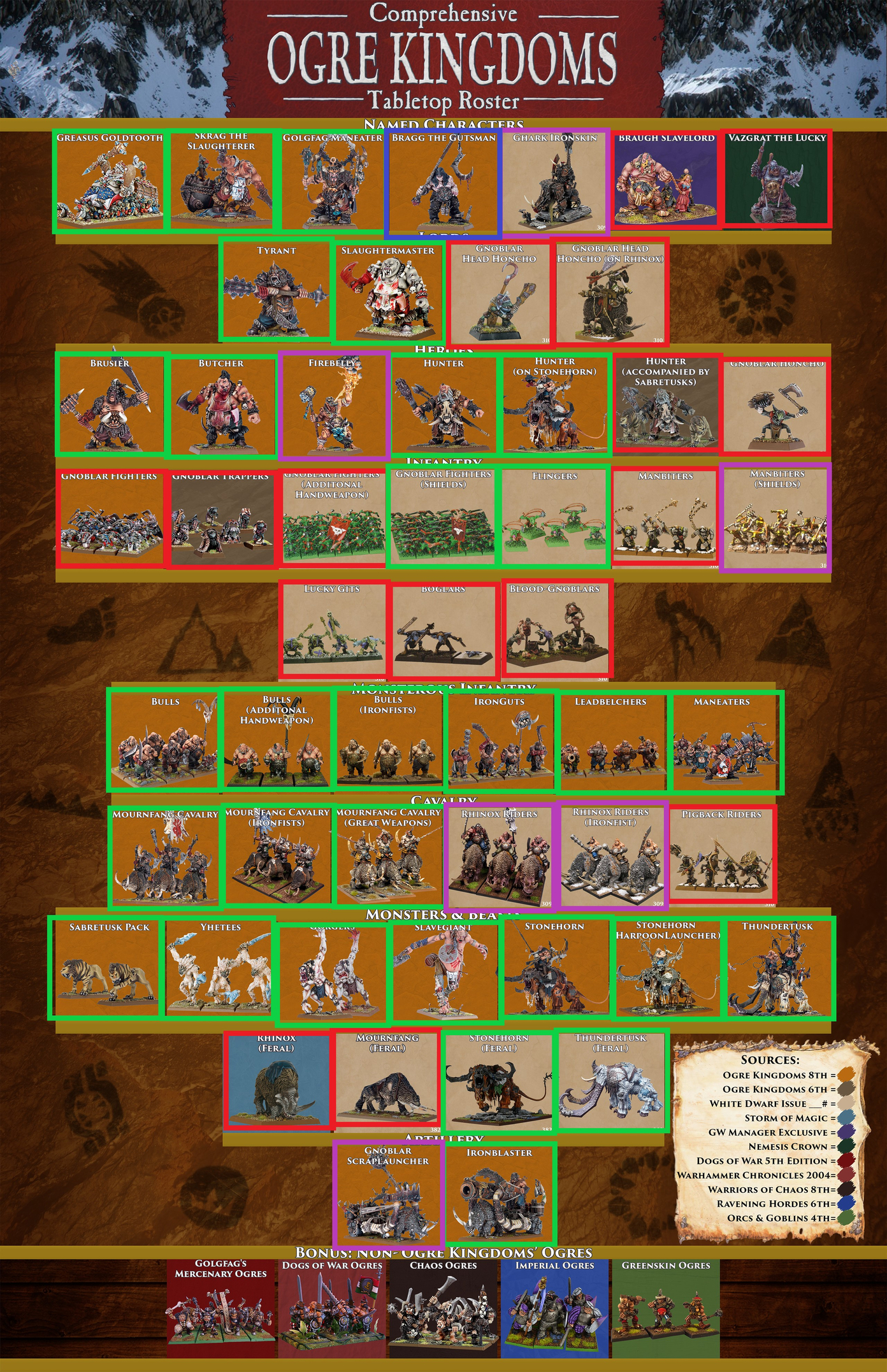 Colour coding:
Green: part of the preorder dlc
Purple: part of an OK dlc later on in wh3
Blue: Maybe a LH? Maybe FLC?
Red: I expect these units to be scrapped altogether.

I think every unit from the Ogre Kingdoms armybook will make it into WH3 at some point, unless there are other units that replace them (Gnoblar Fighers replaced with the shielded variant).

For LLs I think OK will launch with 3, similar to Bretonnia or WoC, rather than Norsca, WE or Beastmen. Of course the roster is more fleshed out than any of those races.

I chose the Firebelly to be a dlc hero, because out of the ogre kingdoms heroes, it is the least needed hero, but is still very cool. Manbiters would make a nice more "elite" gnoblar unit, rhinox cav are there because they fit well with Ghark Ironskin, and the scraplauncher is there because of the 8th edition armybook units, it is the only one I could see not being in the game at launch, and the dlc needed a centerpiece unit.

I might also revise the Chaos Dwarf prediction at some point, but that can wait because Chorfs are at least somewhat later down the line. My bet is on a Campaign Pack in summer or fall 2021.

Edit: for people who want a number, that is 29 units, lords and heroes, of which some are already in the game and many are weapon variants.
The number of truly new units is closer to 20
Ranking of all Total War games I've played:
1. Three kingdoms
2. Shogun 2
3. Warhammer
4. Medieval 2
5. Thrones
6. Attila
7. Rome 2
8. Napoleon
9. Empire
10. Troy (haven't actually played it, I'm just still salty)