ArneSo Hamburg, Germany Registered Users Posts: 28,181
November 2021 in General Discussion
Just wanna give you filthy boys some good reads for the weekend. If you have a hard day, always remember that Papa Nurgle loves you! ❤️

If you ever searched for a potential Nurgling LL out there, then your long journey is now over Brother because the answer is YES! There is Morbidex Twiceborn! 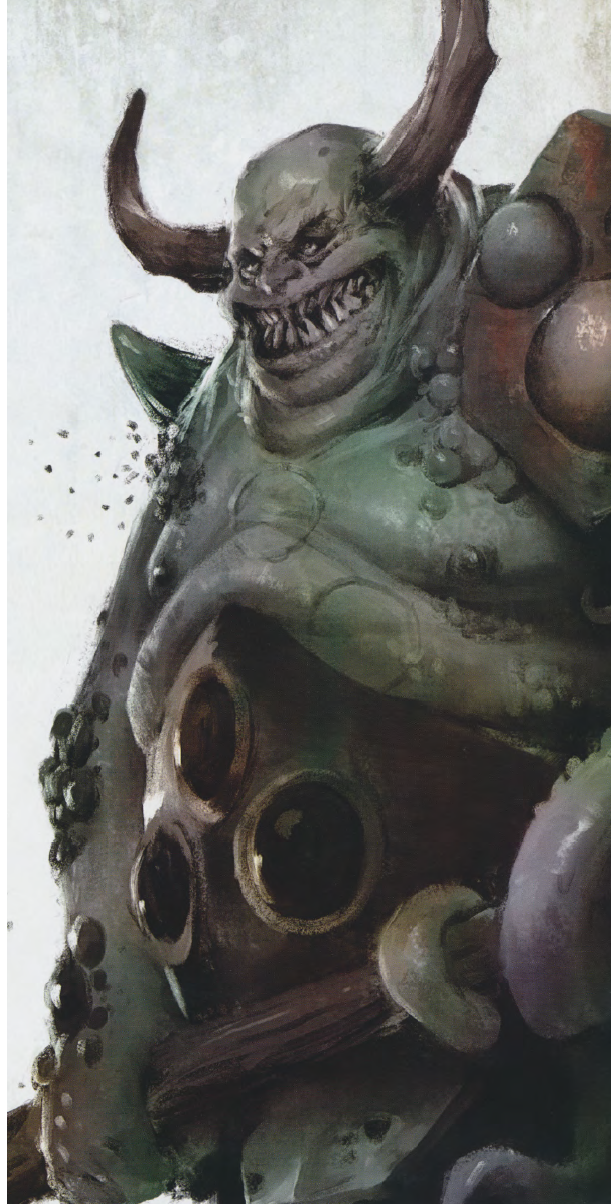 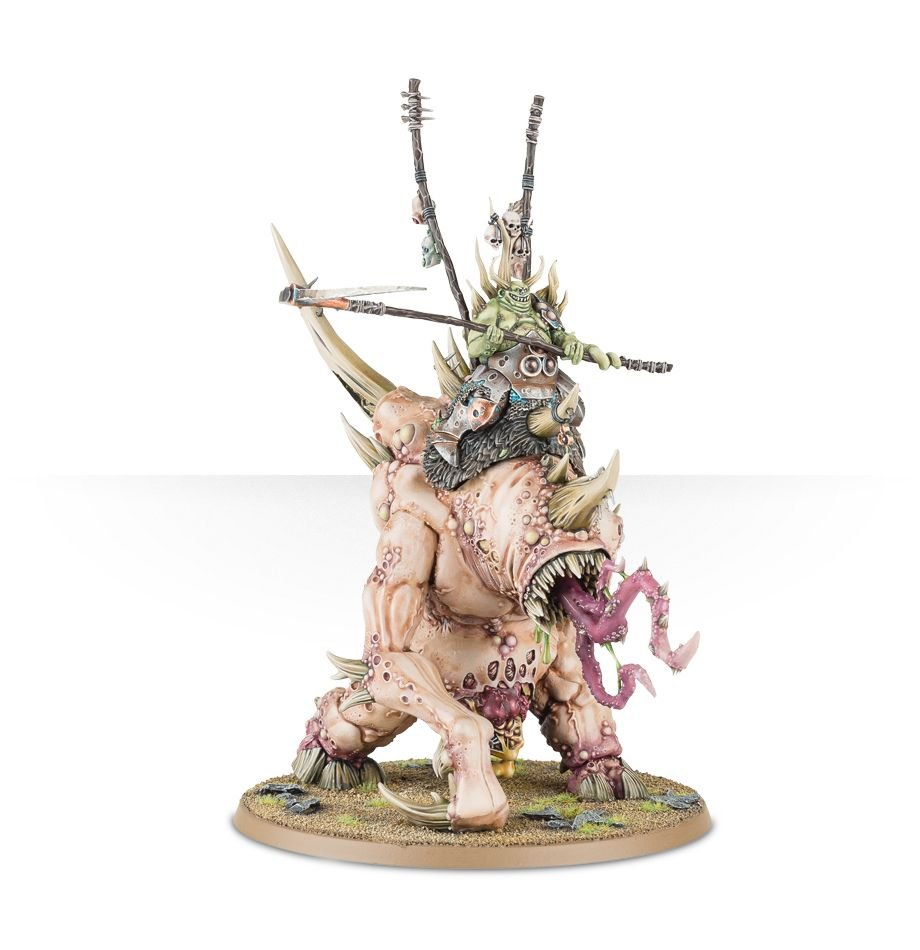 Lore:
Morbidex Twiceborn, born as Morbidex Fireborn, is a mighty Chaos Champion of Nurgle and the third member of the infamous Maggoth Riders of Icehorn Peak. The young warrior known as Morbidex Fireborn had a troubled birth, heaved from his mother's womb even as his parents’ village was being burnt down around their ears. Badly disfigured by the flames, Morbidex’s fearsome appearance impressed all who saw it. Yet it was his skill at arms that saw him rise to chieftain of his nomadic tribe, for Morbidex was a merciless fighter with a will of iron.

Morbidex had been brought up as a devout worshipper of the Dark Gods, and had listened well to his shamans. During their nightly tutelage he learned that the great god Tzeentch was associated with the flames of change. The young chieftain grew to believe that it was the Great Architect that had scarred him as a baby, and vowed to take his revenge. His shamans were horrified at the very idea, but Fireborn insisted. He made preparations for a great voyage, and set out for the Realm of Chaos in search of aid from Tzeentch's greatest rival - Grandfather Nurgle.

Further and further north went Morbidex, climbing through snowdrifts and hauling himself up mountains in his ceaseless pilgrimage. The landscape around him became stranger the further north the chieftain went. Caves became glistening mouths, cliff faces folded in on themselves over and over again, skies screamed and withered trees clutched at Morbidex as he battled past. Yet not for one moment did he entertain the notion of retreat.

In the end, the Garden of Nurgle came to Morbidex. The aethyric winds were blowing strong that year, and the Realm of Chaos spilled out into reality, consuming the lands in a tide of unreality. Unholy vegetation spread rapidly across glacier and ice floe alike, fungi sprouted and spores choked the air until the world became ever more similar to the fecund paradise of the Lord of Decay. Morbidex was climbing the sheer side of Icehorn Peak with only a pair of sharp axes when this wave of strangeness washed over him. As he hung precariously from the mountainside, an avalanche descended upon him - not of snow and ice, but of giggling, excited nurglings. The nurgling avalanche took Morbidex with it all the way to the bottom of the mountain, each of the portly little daemons squealing in delight around the chieftain as they tumbled into the mortal realm. The chieftain cried out too, but not in joy, for he feared he was being carried to his death.

Buried alive by countless tonnes of suppurating, daemonic flesh, Morbidex lost consciousness. When he recovered he was swimming in a pitch-dark morass of diseased liquids and squishy, bloated bodies. He did not know which way was up and which was down, and his breath came in ragged gasps, each foul mouthful carrying a throat-searing stink. He tried to dig his way through the mass, flailing and thrashing as the nurglings around him tittered and wriggled, occasionally tickling him or poking tiny holes in his flesh.

The Twiceborn
The boldest of the nurglings, introducing himself as Little Bubo, slipped and squirted his way through the living quagmire to Morbidex’s side. He asked the chieftain a child’s riddle, and though Fireborn sullenly ignored it at first, eventually he gave the answer - it was a riddle he himself had told as a child. Little Bubo burrowed down and yanked hard at Morbidex’s belt, but he was little stronger than an infant, and achieved nothing. Next to speak was Bull Boil, a comparatively brawny nurgling with a steer’s horns. He asked the trapped chieftain a riddle of his own, and after long thought, Morbidex gave the correct answer to this conundrum too. Bull Boil shouldered his way to Morbidex’s feet and pushed upwards with all his inconsiderable might. Over and over again this strange test was undertaken, each of the bravest nurglings asking his own riddle. Those to whom Morbidex gave the right answer would aid him, pushing and pulling as the chieftain struggled to get free. Though they were individually weak, when a dozen Nurglings strove to help, their aid finally paid off. Slowly, inch by painstaking inch, Fireborn managed to climb through the morass.

There was a price to be paid, of course, as there always is when dealing with daemons. Those nurglings to whom Morbidex gave the wrong answer would laugh evilly and touch a part of his anatomy with their spindly fingers. Mere moments later, that part of Morbidex would change to echo the form of the daemon-mite that had touched it. When the chieftain failed to answer Wobblegut's riddle he felt his belly distending to become a pallid boulder of suppurating fat. When Slitherlimb’s question went unanswered, Morbidex found a tentacle sprouting painfully from his left elbow. Last of all was the question posed by Grinling, a nurgling who had suckled at Nurgle’s own blistered teat.

The riddle was simple in nature - what were a man’s desires next to those of a god? By this point Morbidex was at his wits’ end. His head swimming, he roared in frustration and caught the nurgling in his hands, squashing it until it popped like an overripe pimple. He found his maddened shout change to a contralto yelp, then to a high pitched giggle as his face changed to that of the Nurgling he had just destroyed. Morbidex fought through the pain of his transformations, bursting up from the nurgling-tide like a zombie clawing out from the grave. The daemon-mites, impressed by the tenacity of the champion in their midst, cheered in unison as Morbidex threw back his newly-horned head and laughed manically at the shimmering skies reborn.

Characteristics:
Morbidex has been followed by hundreds of jubilant nurglings ever since. He was borne on a squelching, farting pile of the creatures to their caves beneath Icehorn Peak, where he introduced himself as Morbidex Twiceborn. Recognizing a kindred spirit, Orghotts Daemonspew offered Morbidex the position of jarl in his tribe - provided, that is, he could conquer a beast of greater size than a mere nurgling. Incensed, Morbidex set off for the Eternal Lagoon in search of a pox maggoth much like the one that Orghotts himself rode.

He found one soon enough; a giant drooling fiend with a triple tongue protruding from its mouth. The chieftain ducked and rolled out from the maggoth’s powerful swings, and though his nurglings distracted and confused the beast, whenever Morbidex’s scythe lopped off a limb or a tongue it would swiftly grow back. The rampaging maggoth swallowed dozens of Morbidex’s daemon-mites whole, and for a while the chieftain feared for his life. However, the pox maggoth’s unholy appetite proved its downfall. The nurglings inside the maggoth frolicked in its stomach acids, giggling and splashing even as they dissolved. Blending their essence with the beast’s, they mingled their minds with that of their devourer until it too became a devoted follower of the Twiceborn. Morbidex rode the beast back to Orghotts, taking his place at Daemonspew’s right hand.

Wargear:
Tripletongue - Morbidex, like all Maggoth Riders, rides on top of his Pox Maggoth Tripletongue, with the ability to spew toxic filth upon his enemies.