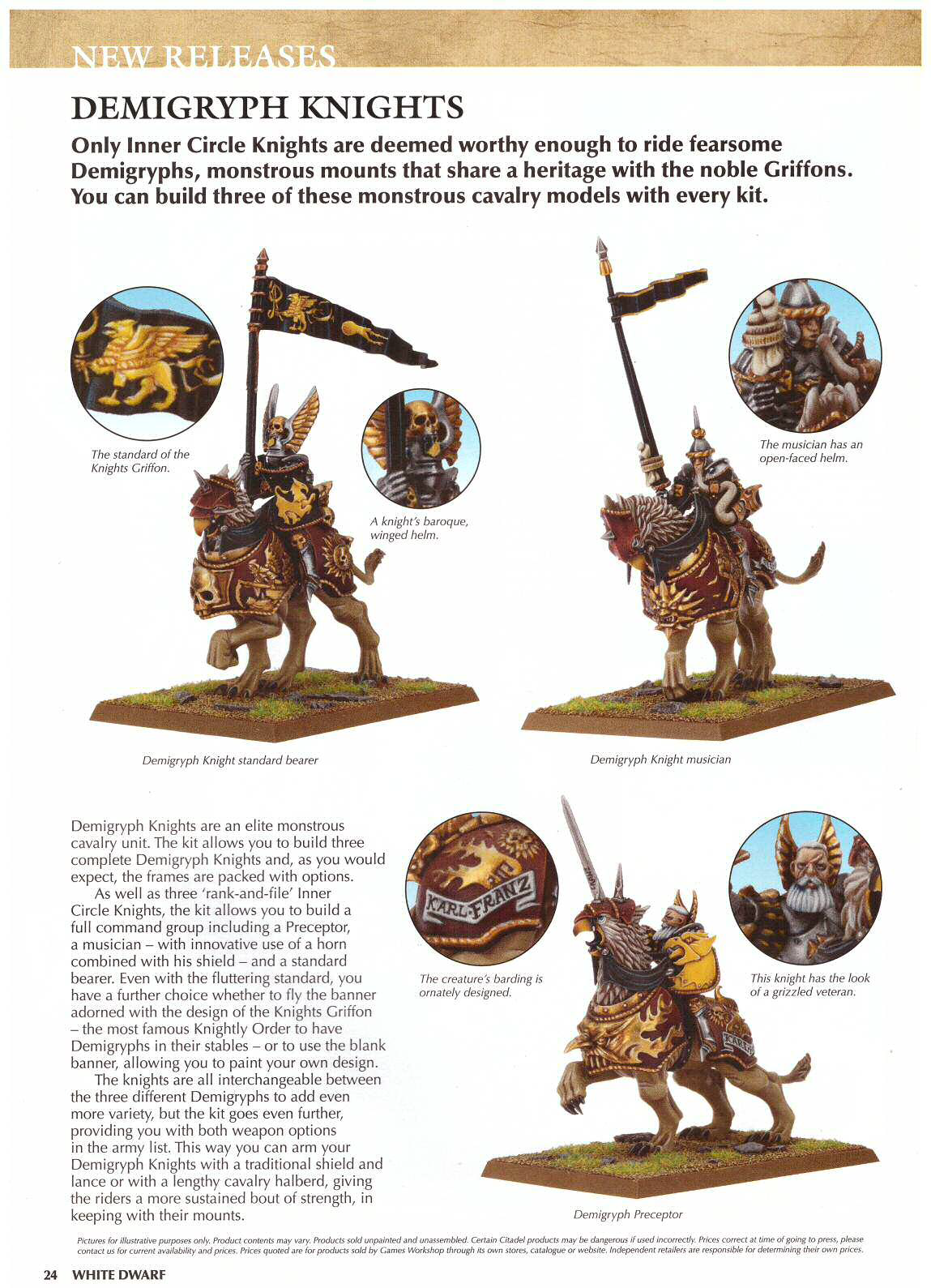 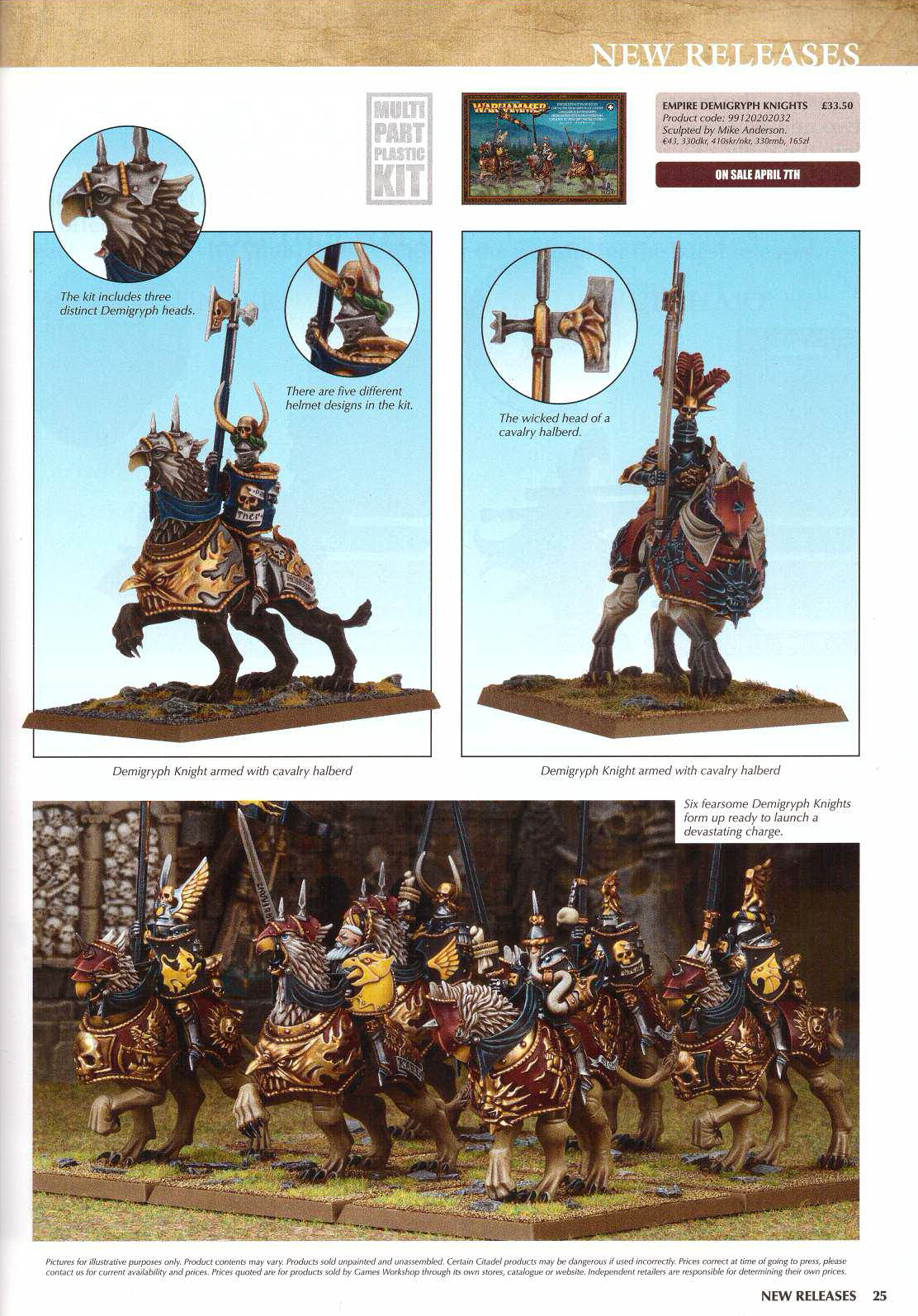 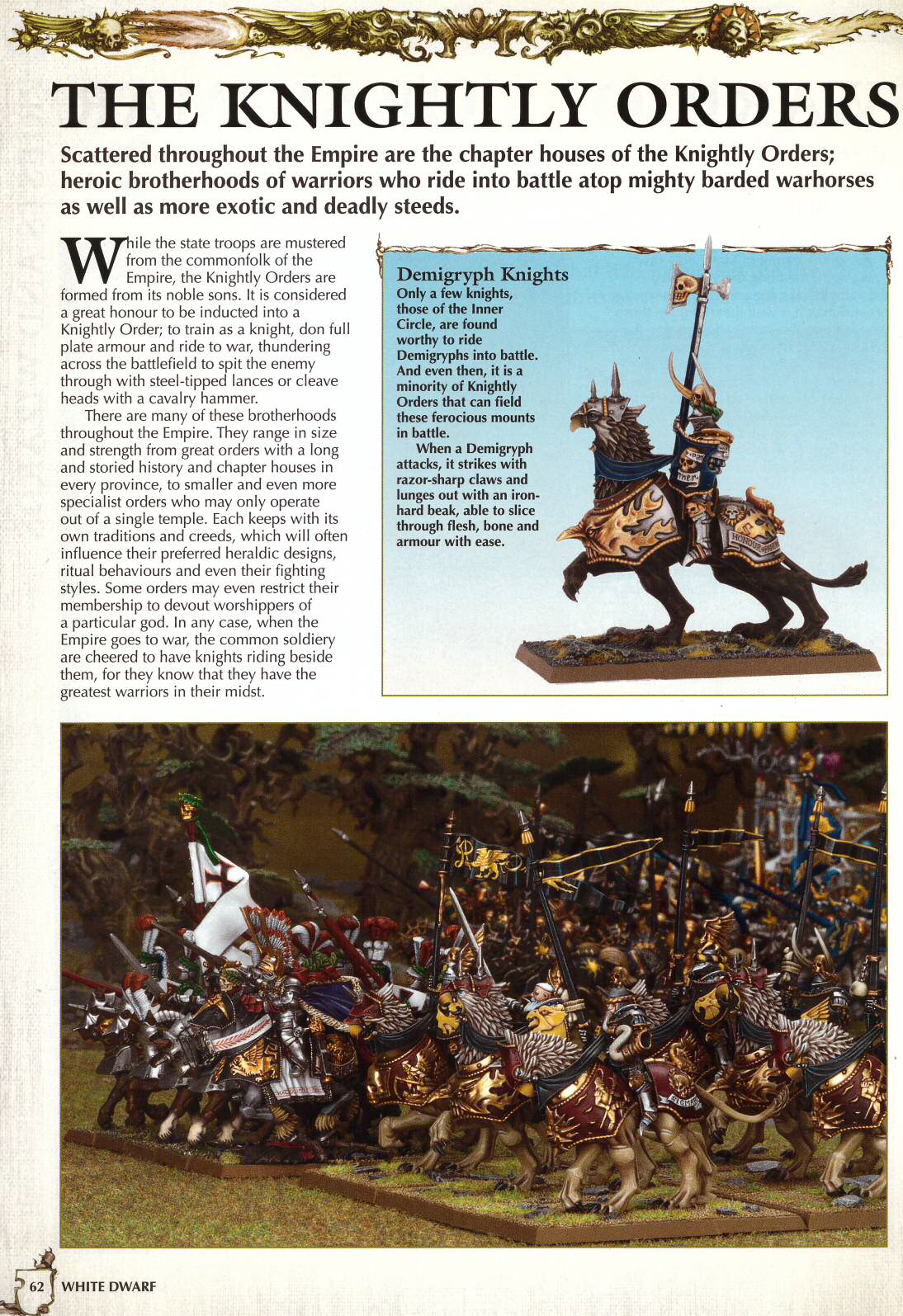 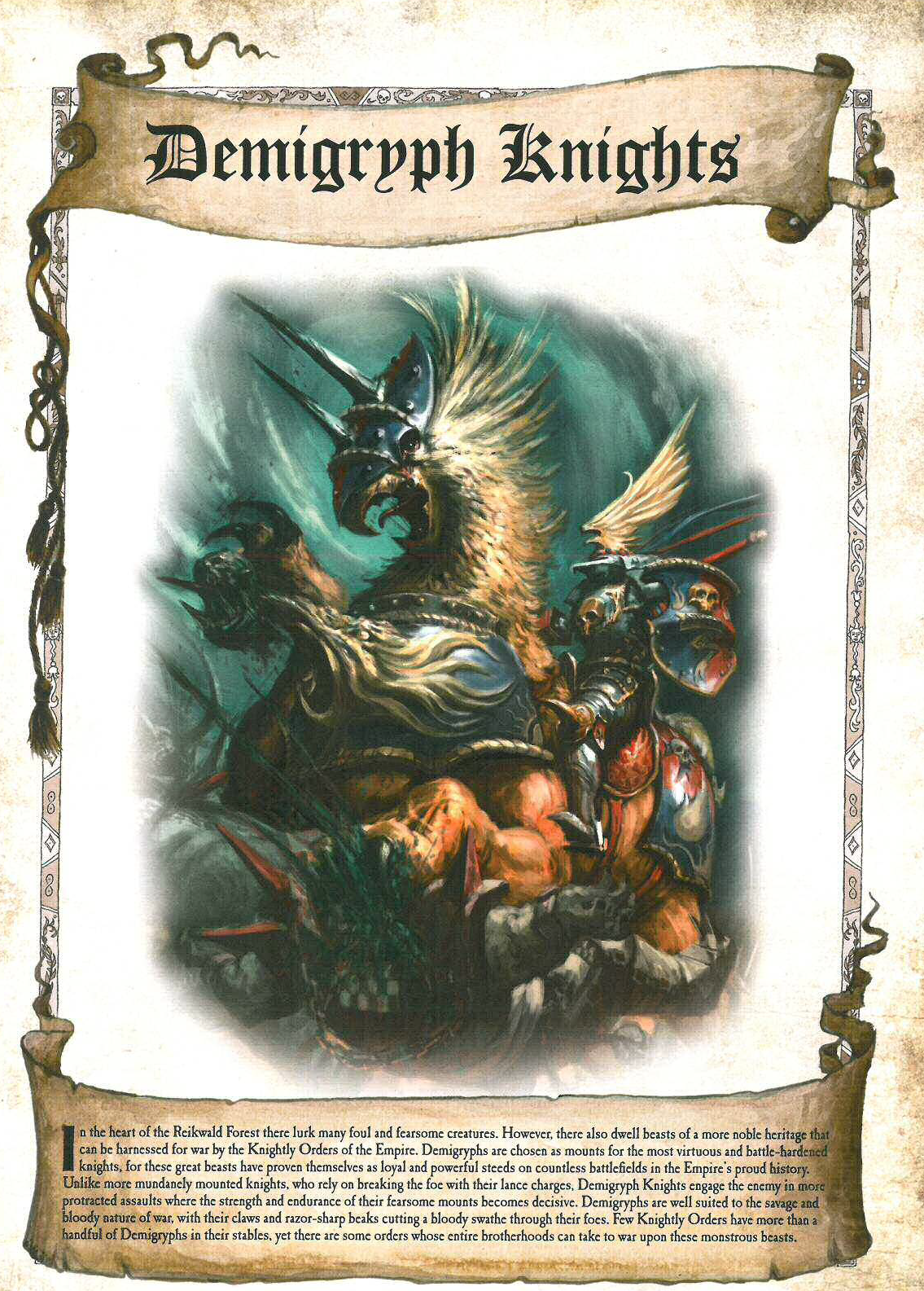 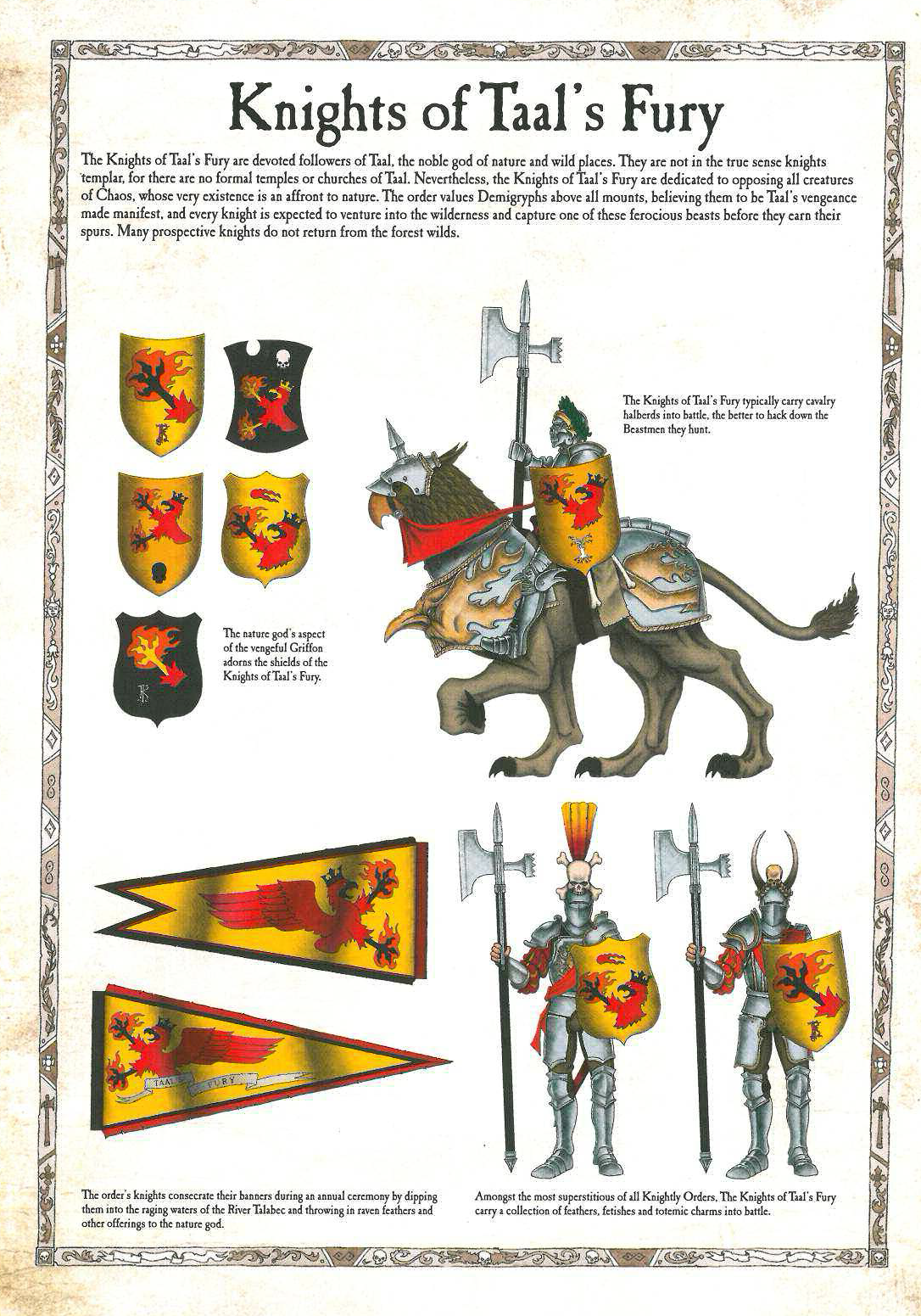 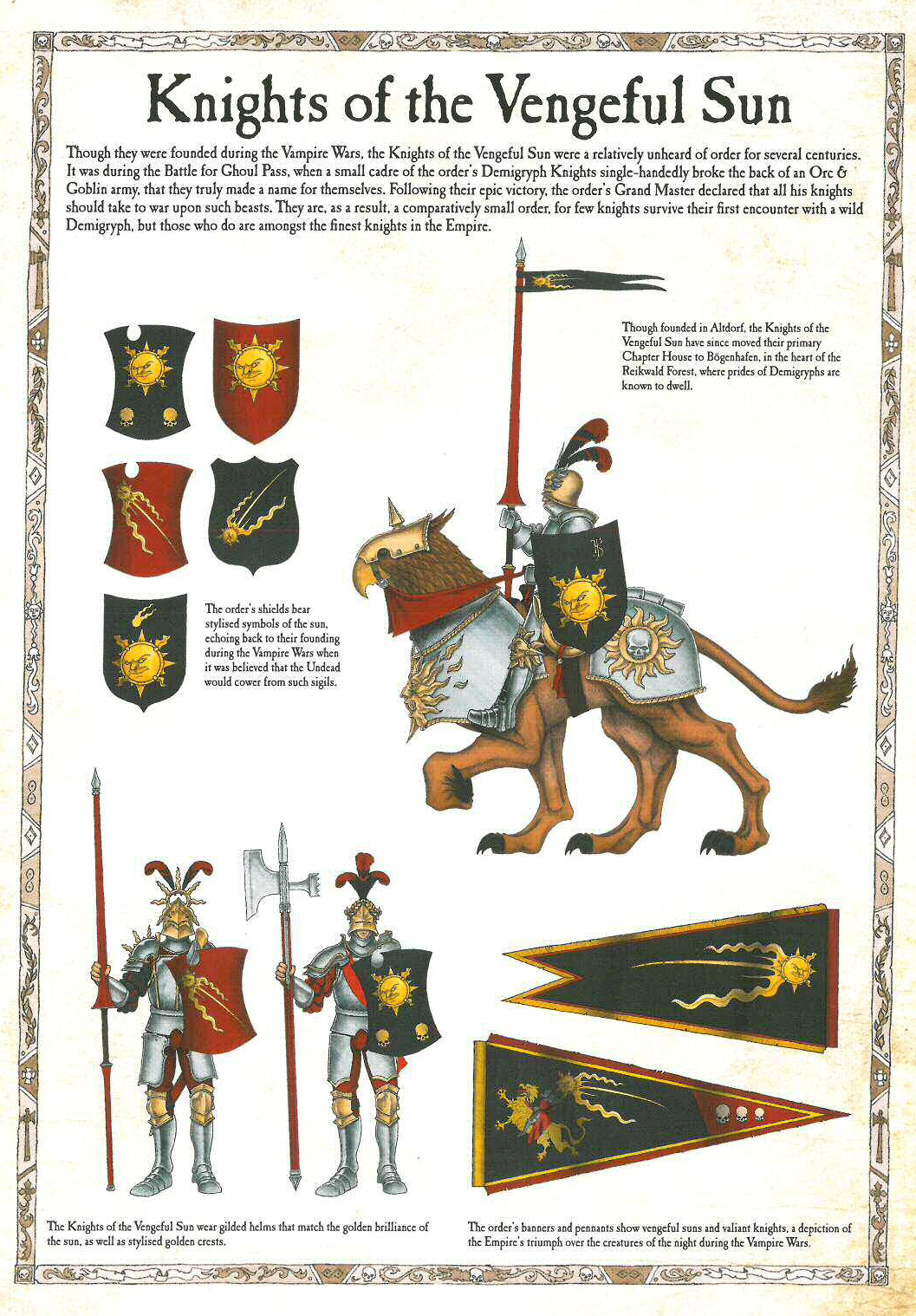 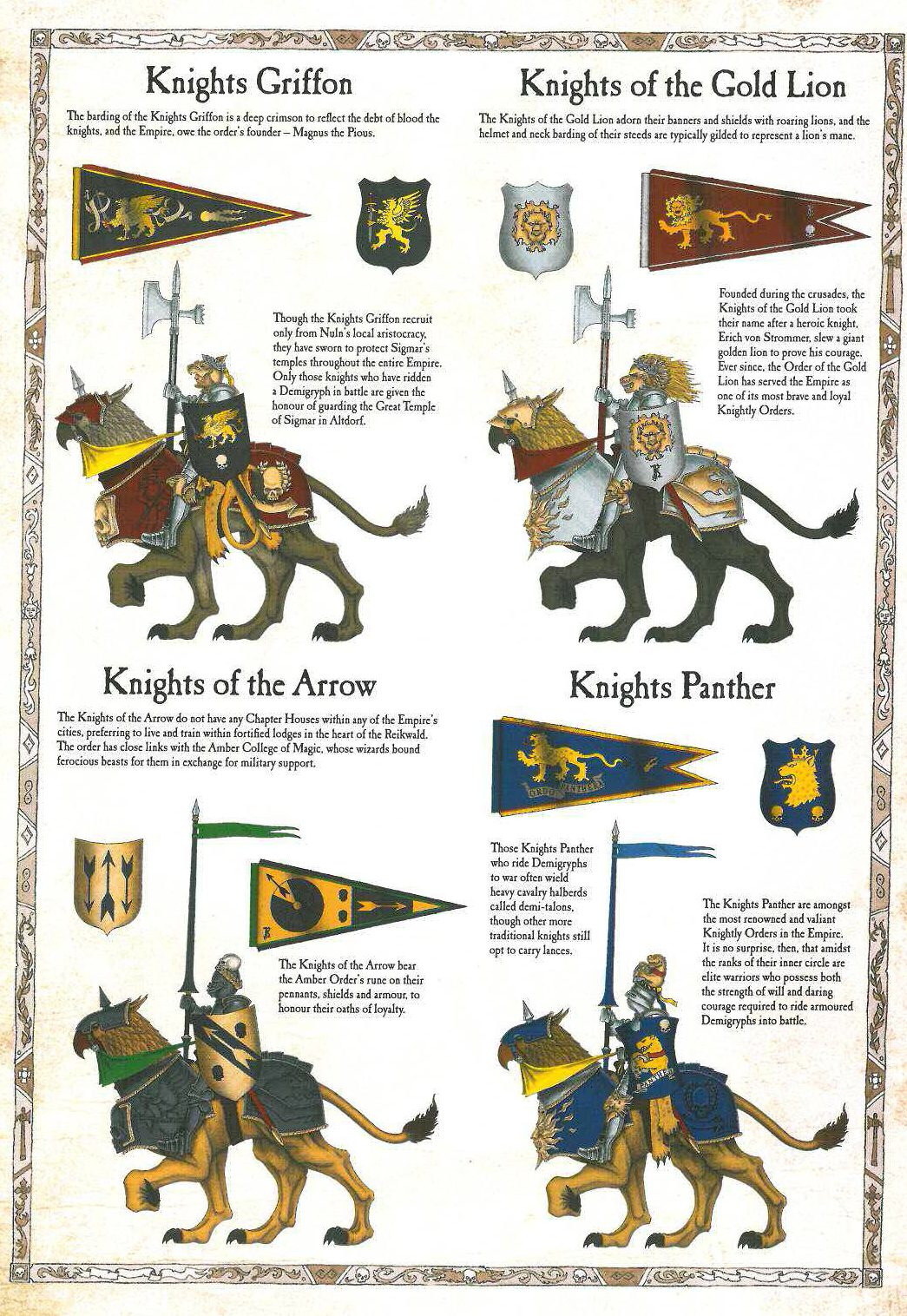 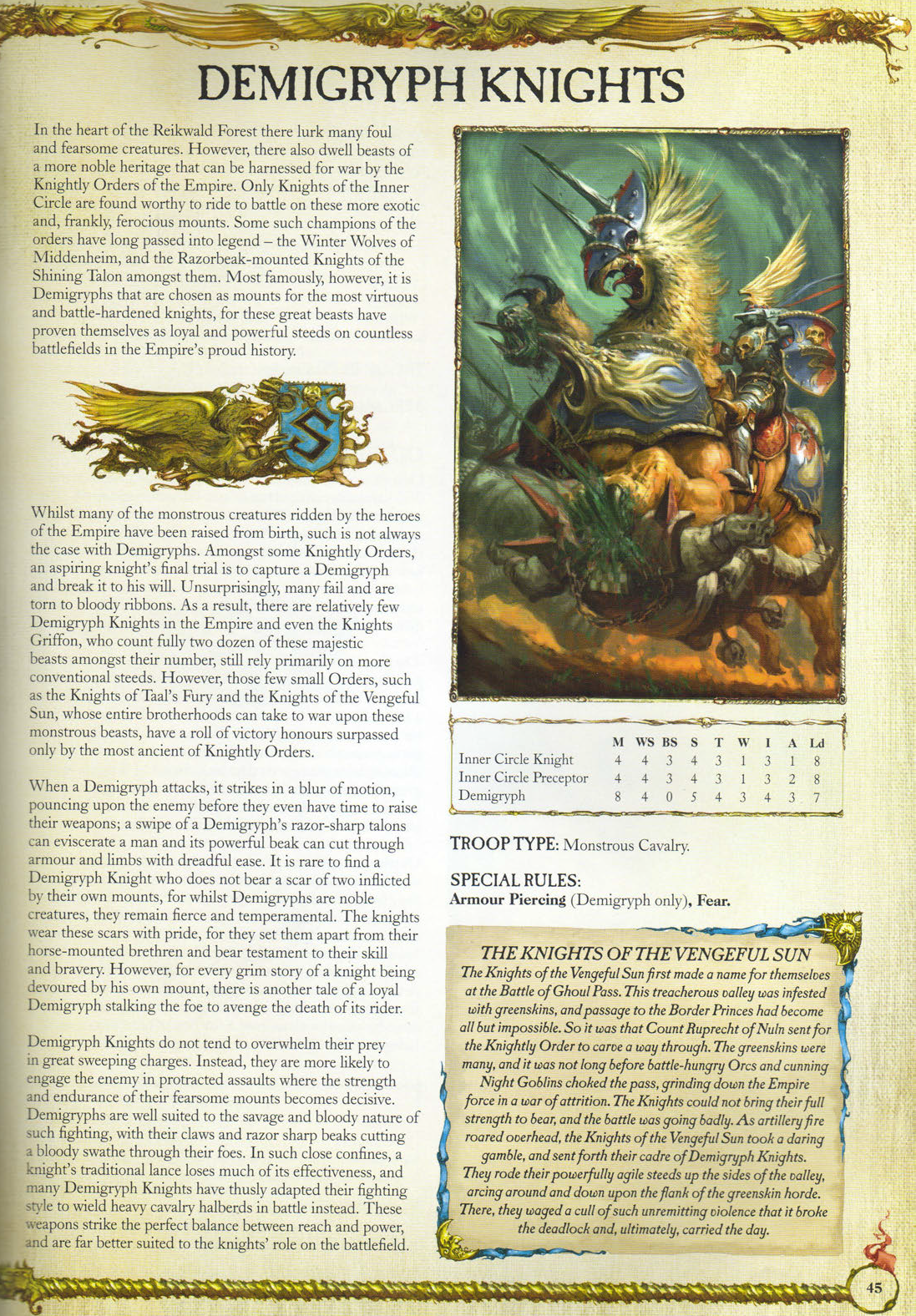 So while showcasing that bascially all Knightly Orders might field a Demigryph detachment (elite of the elite), in TWW itself we have the "Royal Altdorf Gryphites" as Renowns. Which were featured in the "Sigmars Blood" campaign book. But sadly without any strong lore and just the generic studio Knights as "painted example". 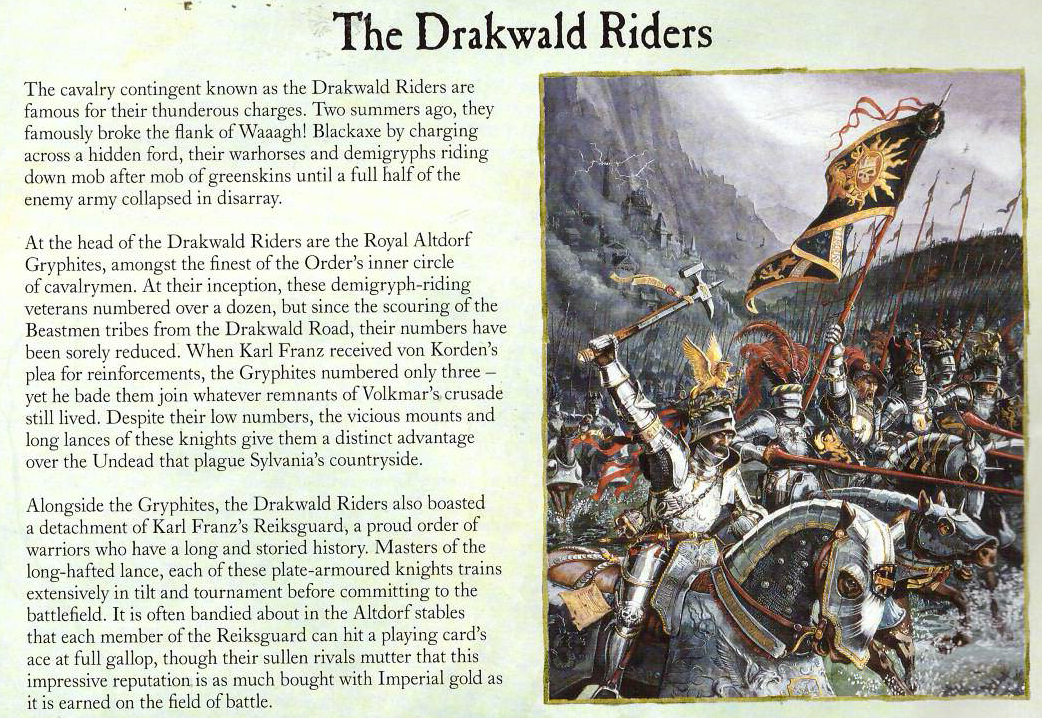 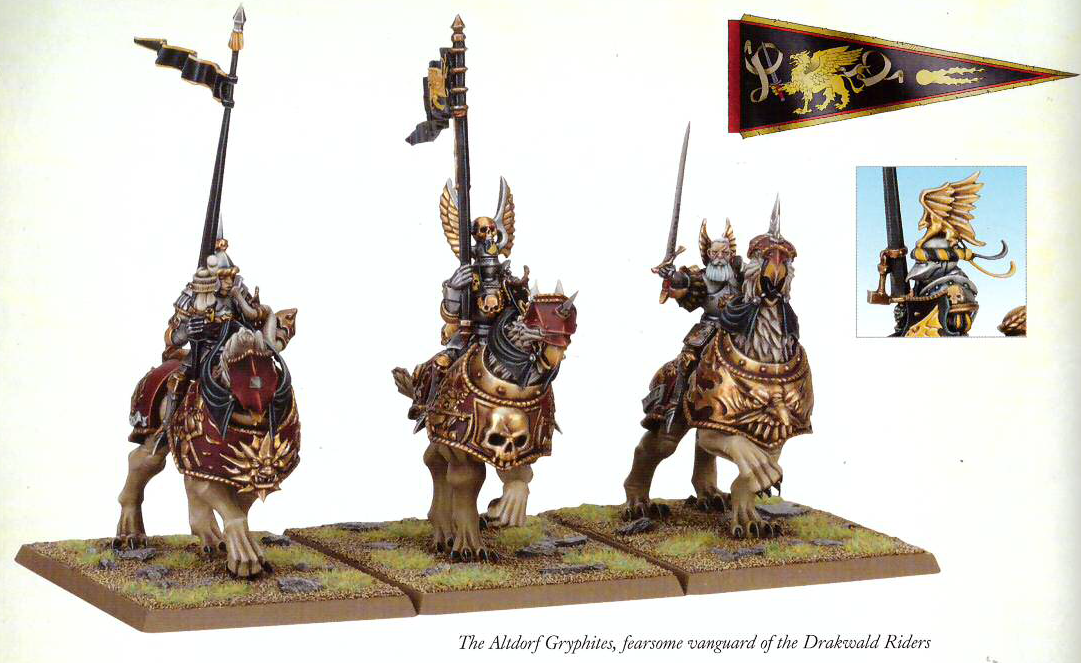 It might also be notable that while the 8th armybook introduced Demigryphs as unit, no character was able to mount one. Which is strange since if Elite Knights would take them you would assume the Empires Lord choices at least also should do so if the will (or if the player wanted to attach a Lord to a demigryph unit. Since in 8th edition mounts with different base sizes joining up was rather bad for the character in question). As with other books who had a similar issue (Necropolis Knights as TK unit but no Lord could take the Serpent mount; Forest Goblin gigantic Spider mount for characters, but no unit; Nurgle Plague Drones unit but no Rotfly moutn for the herald) it is most likely a "we don't have it sold so don't make it a entry" issue, which would probably have resolved itself in the future with a new cycle of armybooks but someone had the bright idea to kill the world instead.
Still, 8th edition "Tamurkhan" introduced Theodore Bruckner 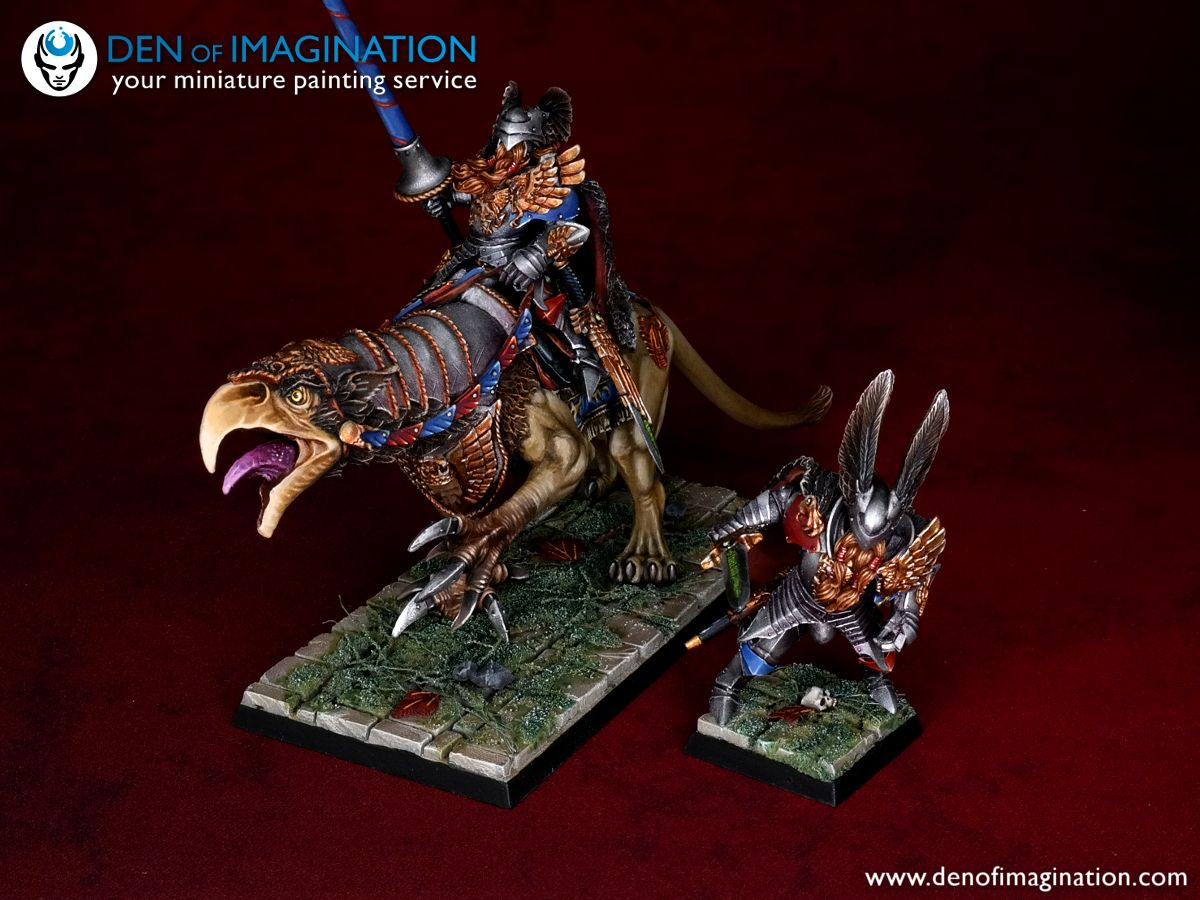 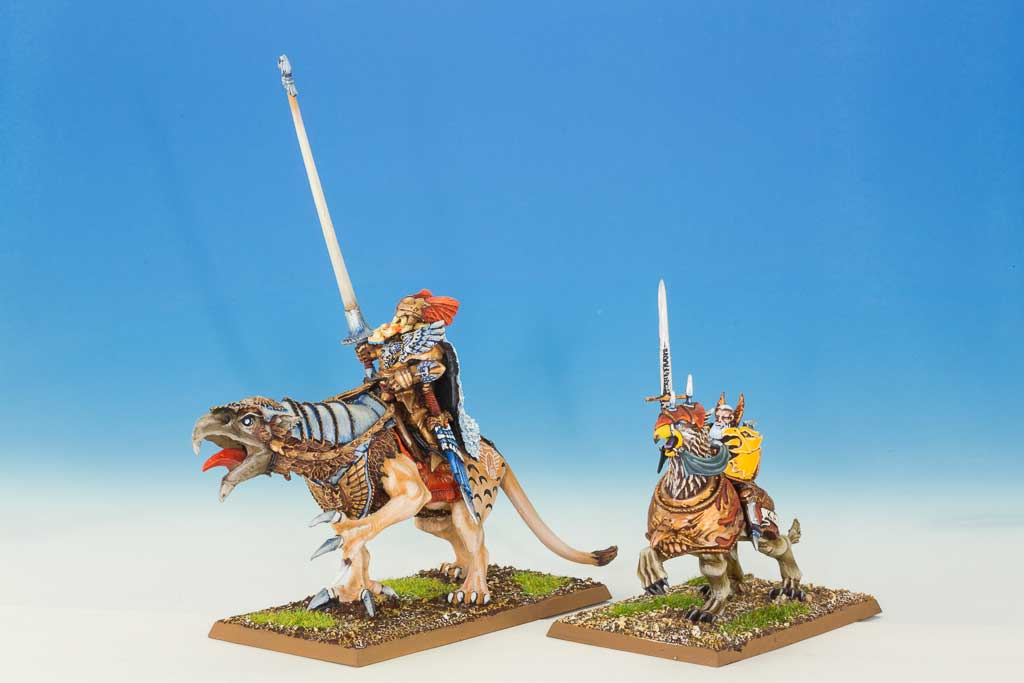 Proving that it should not be impossible for characters. And since game#3 for example adds the rotfly mount towards the DoC Nurgle Herald, maybe future Empire reworks/DLCs might add demigryph mount diversity for Empire Lords. And maybe Heroes, since when we learned one thing from Kislev, then that everyone should ride a monstrous beast...