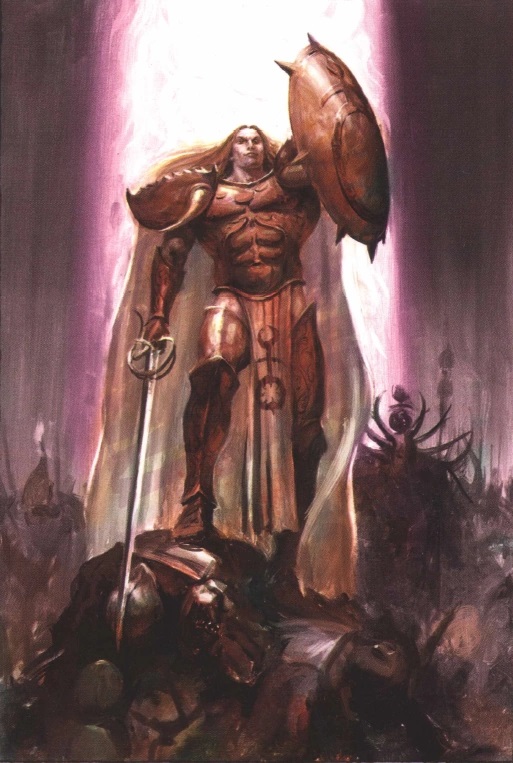 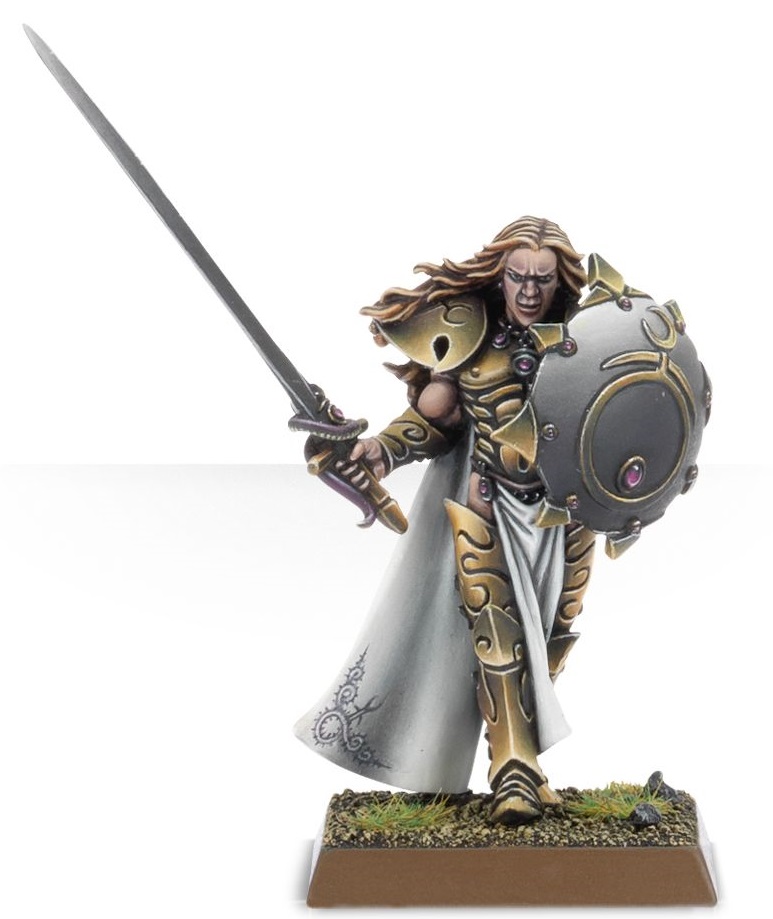 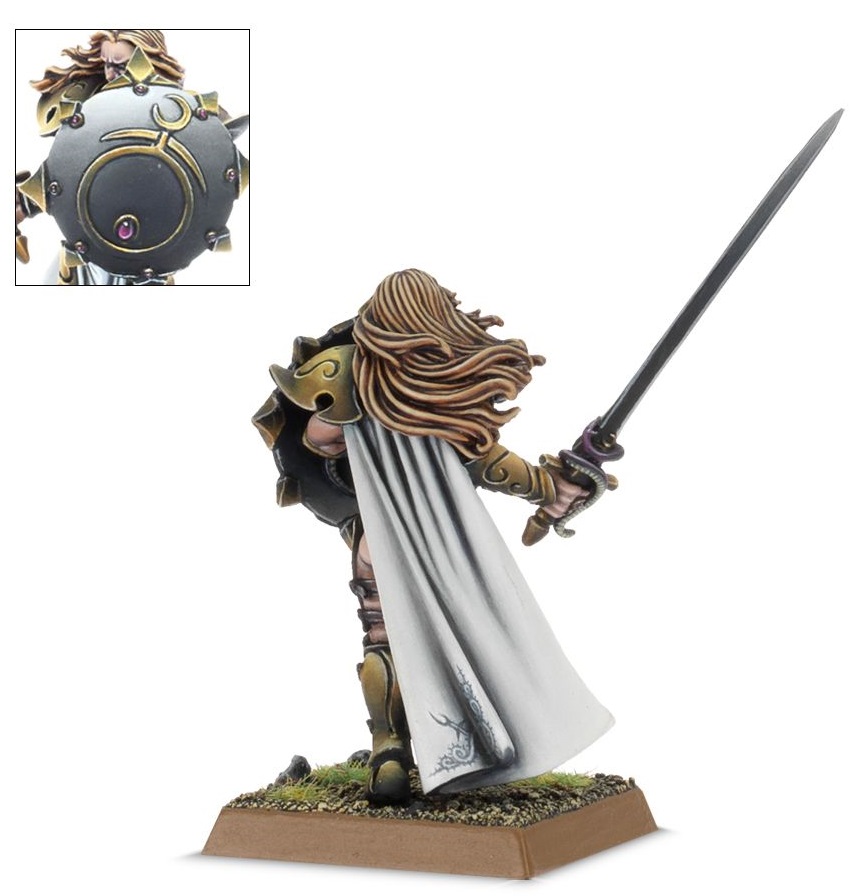 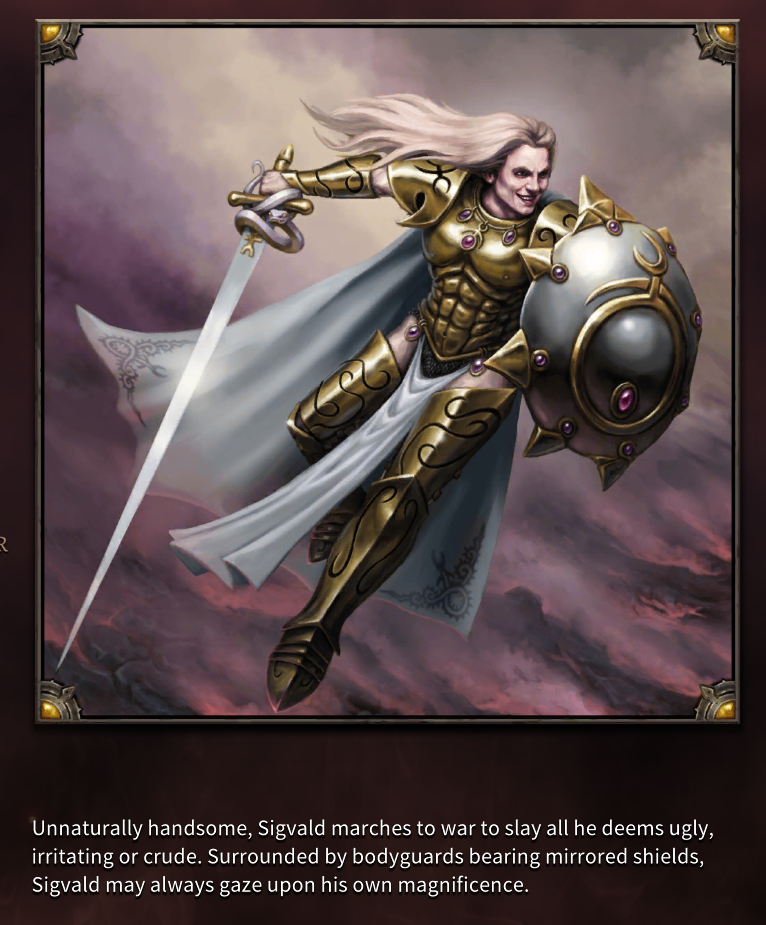 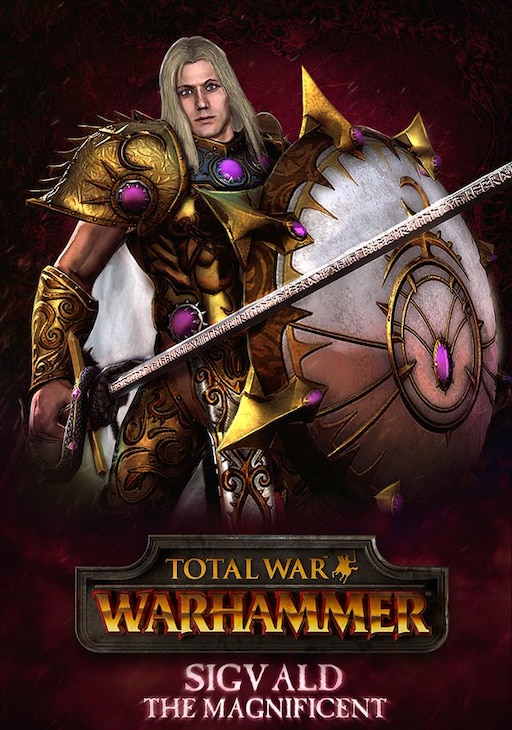 Introduced during 7th edition Warriors of Chaos armybook, Sigvald replaced the older Dechala and Azzazel as Slaanehs playable special char and transfered over to 8th edition. 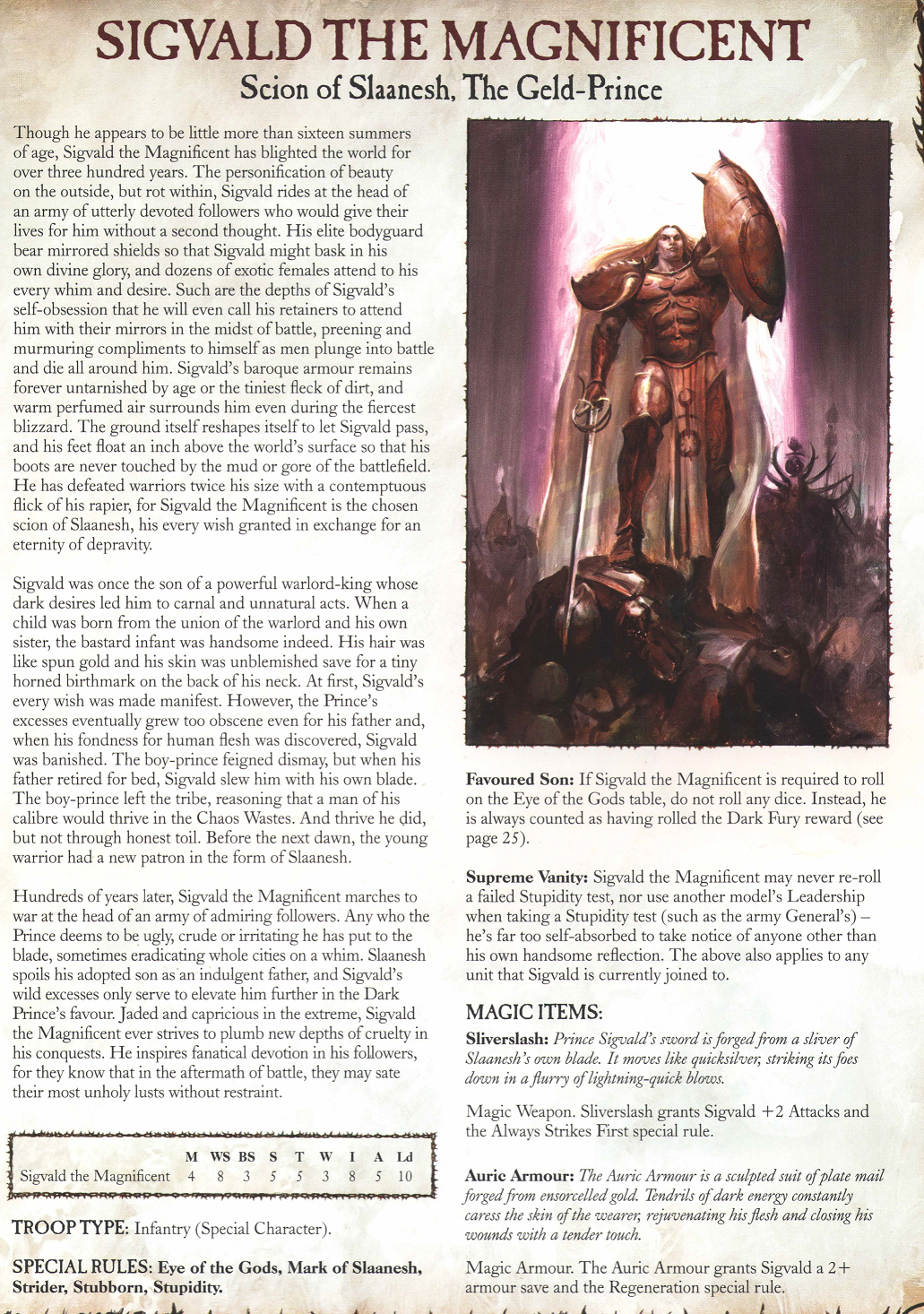 He was mentioned in the WFRP - Liber Ecstatica 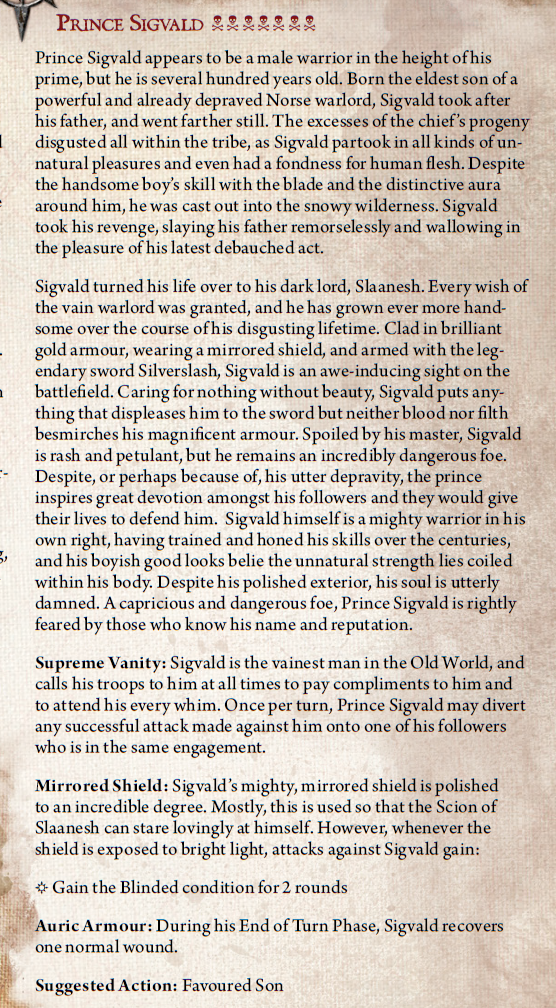 Sigvald had its own novel 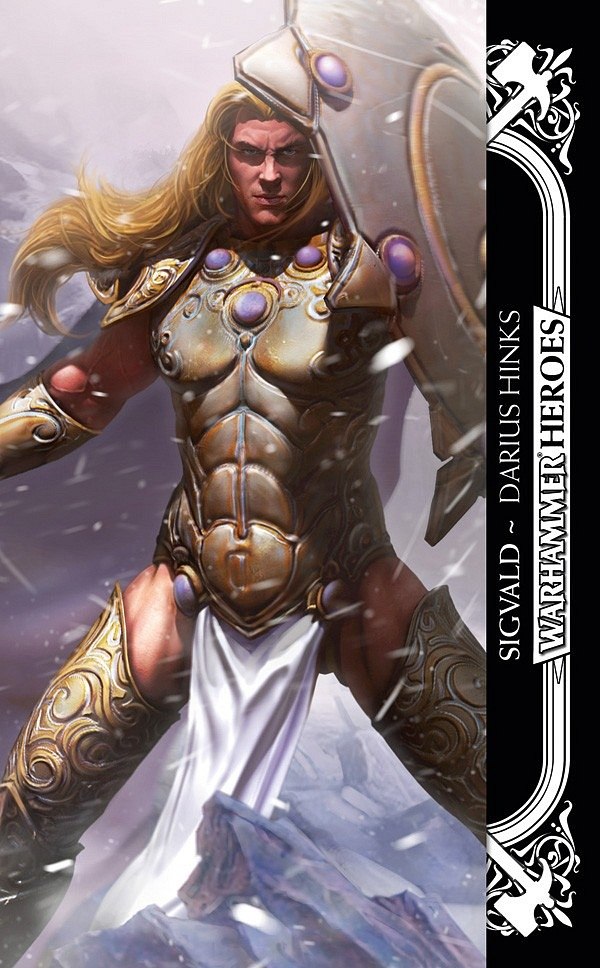 which is included in the 5th Chronicle Omnibus "Champions of Chaos". For a printed copy these days you probably have to search the 2nd hand markets and/or eBay.


During "The (horrible) Endtimes", Sigvald was of course around but afaik did not much. He was fighting in Parravon, was apparently around the battle of Middenheim 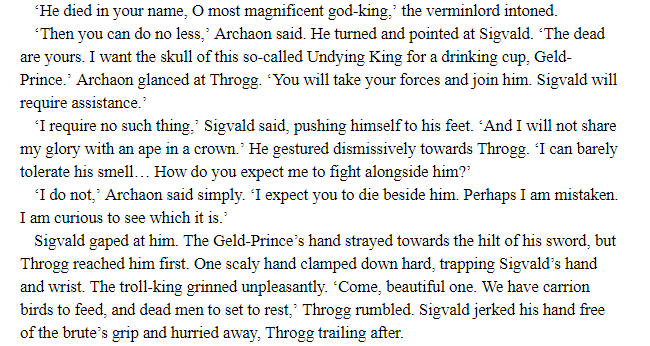 and then transported elsewhere

where he clashed with Nagashs dark forces and had a duel where he killed Krell, and died afterwards by the hand of Throgg. 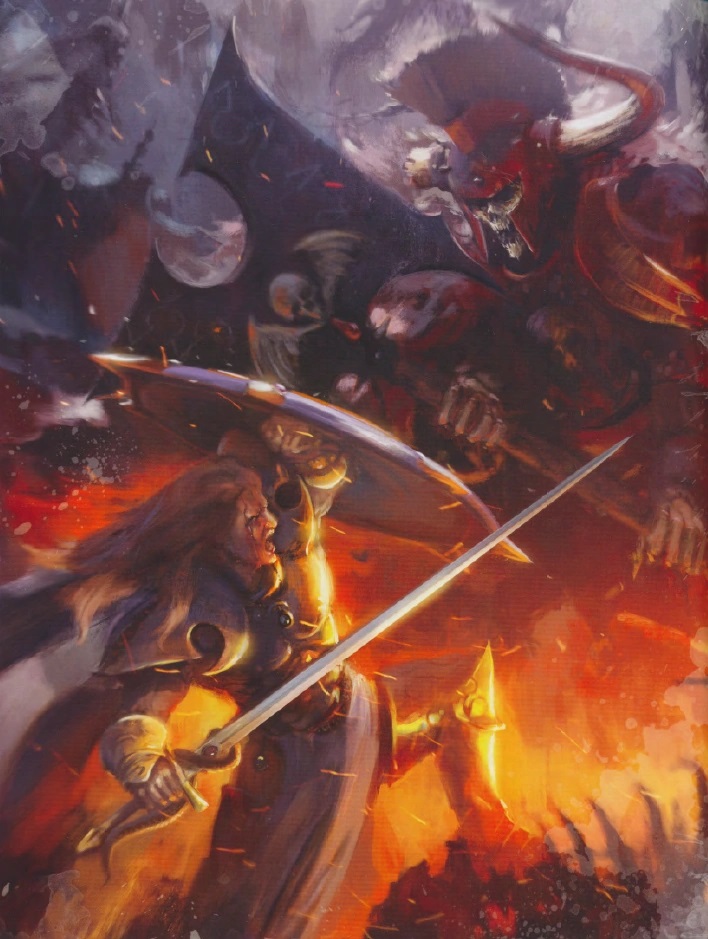 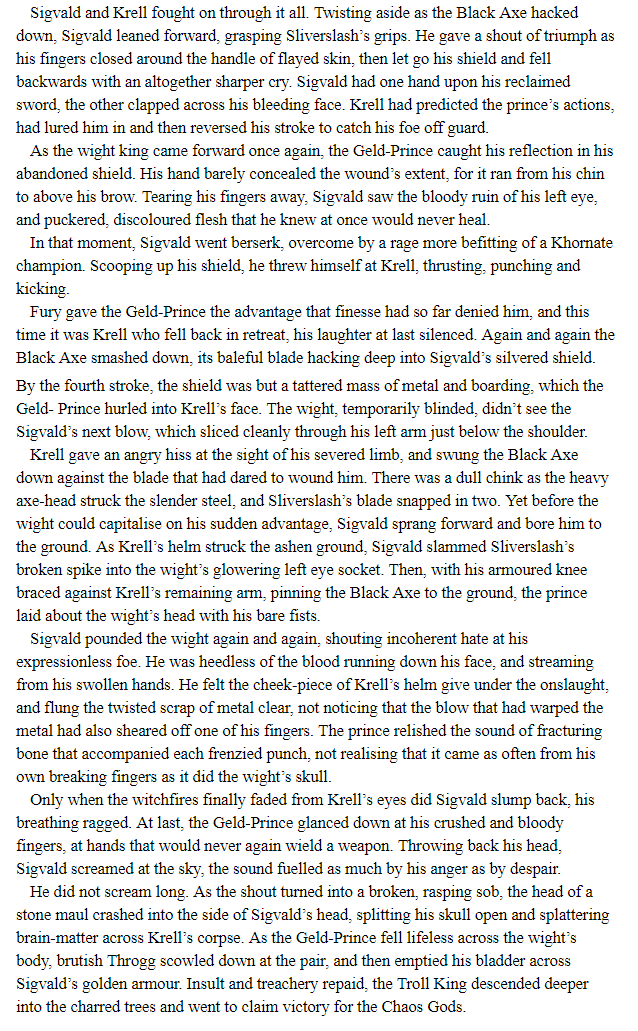 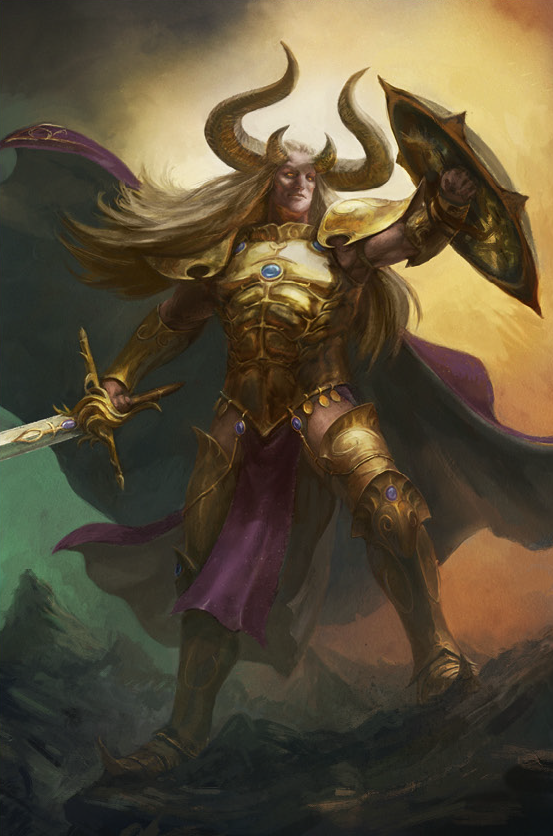 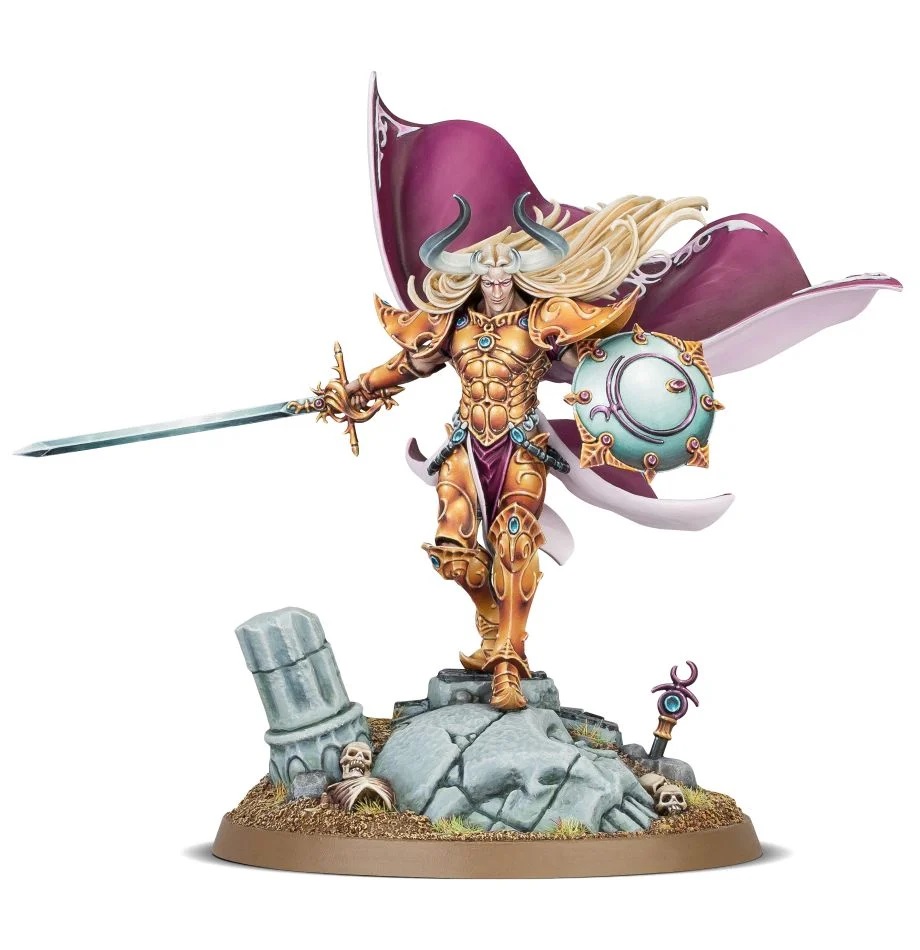 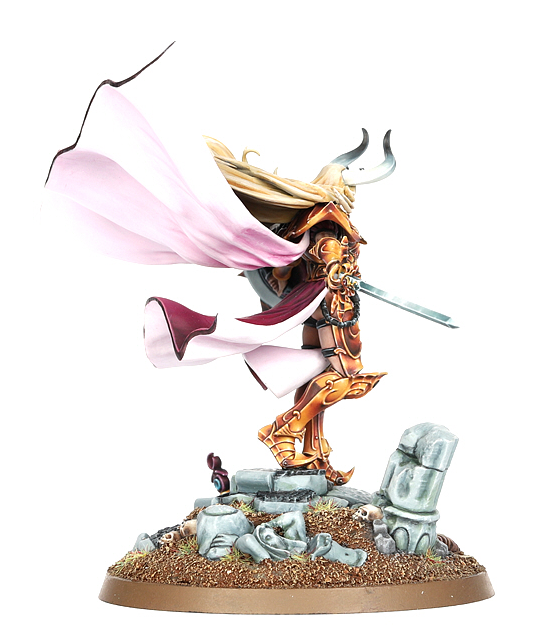 Coming back from the dead, reshaped by Slaanesh, he apparently is still not a Daemon Prince. 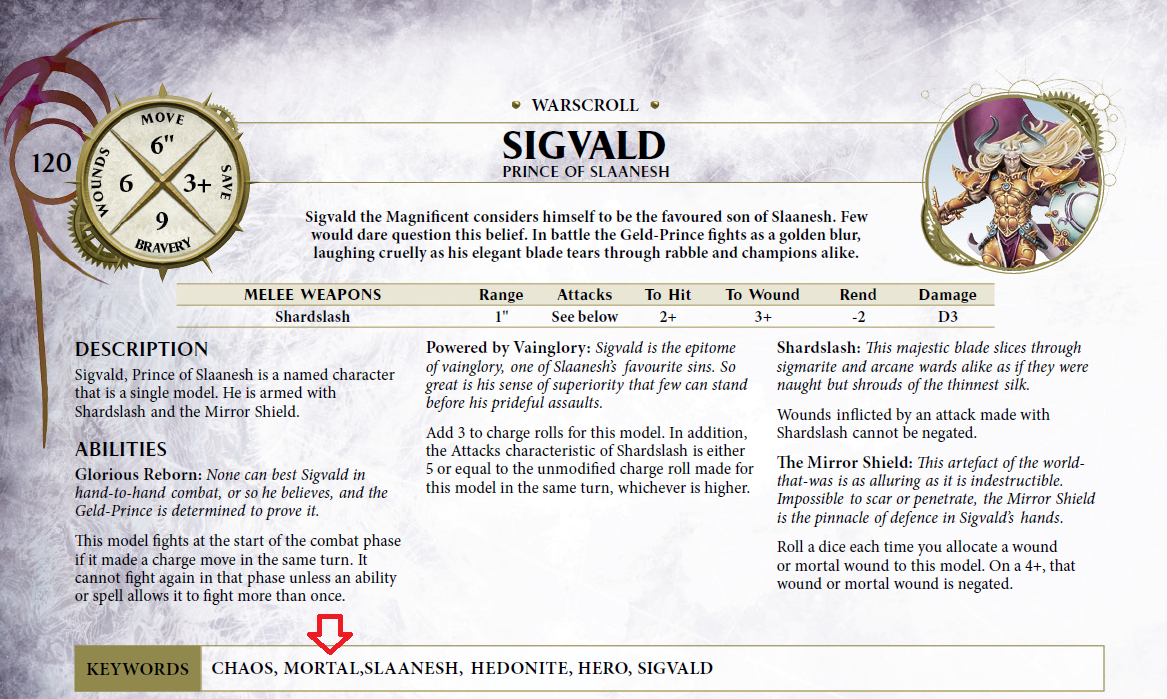 For TWW of course Sigvald is around since the first game, being placed in the WoC roster as the only marked guy or option. 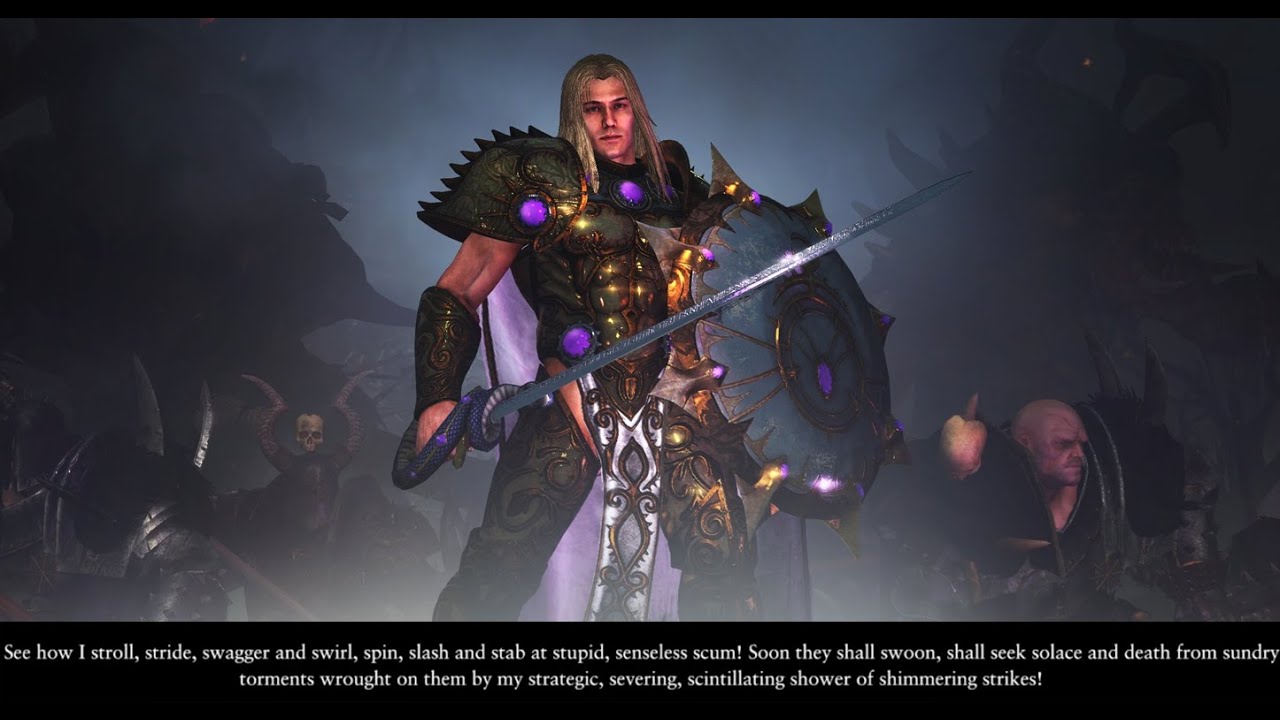 With game#3 released and now a Slaanesh-race around there are two paths open for CA. So it is questionable if they would take a old DLC addition from another race, and put him into a game#3 core race instead. Leaving Sigvald in the WoC roster might not be that bad, *if* the announced WoC rework might change how things are for the WoC overall. From simply handing Sigvald marked Mortals and limited Daemon access, to a whole rework of WoC and them getting marked Lords/Heroes+units on itself, the WoC could end up in a good spot. And Sigvald staying there, could just be the first step of adding three more marked special chars toward the WoC. Sigvalds 7/8th edition companions (Festus, Villitch & Valkia) would probably be the best idea. While other marked mortals, like for example old Valnir or newer Tamurkhan could still be added rather into the Nurgle-race instead.
We might learn more at the end of the year. Once CA put out their first "4 Champions" DLC and we might actually get some insight on what rework the WoC are supposed to get.

SIgvald itself functions as he should in TWW. He is a foot Lord duelist, who floats over terrain

so giving him some superduper mount is not the way. And floating is also not flying, so nobody get weird ideas here either

His skilltree was mostly fine when last played, but I assume it needs a bit of upgrading in game#3 either way. Depending on him going to Slaanesh, or sticking too WoC and get new Slaanesh units to use, he might need a revamped red skilltree to boost the Slaanesh troops. With Sigvald owning his own pleasure palace in lore and generic WoC using settlements in game#3, of course a WoC rework could grant settlement access in general. In that case, Sigvald could on IME get his palace starting position somewhere in the Chaos Wastes (afaik we have no pinpointed location where that should be) with some special Slaanesh landmark options. Faction name obviously should be "The Decadent Host" as was mentioned in 7th edition.

I doubt it will change, but the RoR "Mirror Guard" which gave for the first time a visual to Sigvalds bodyguards, were a fine invention from CA. 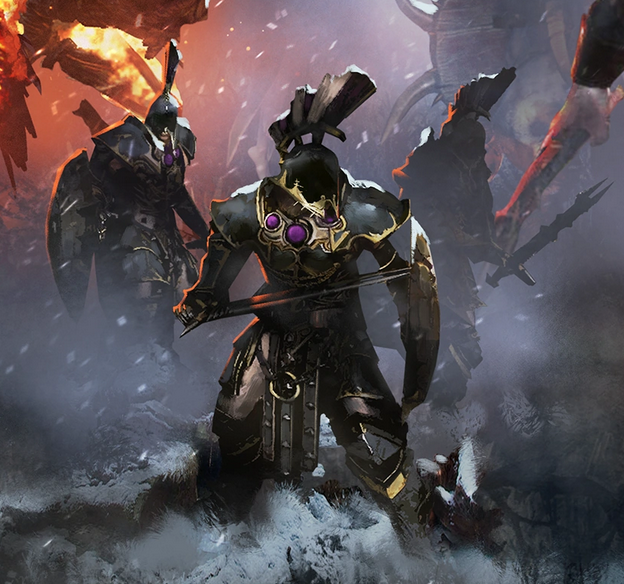 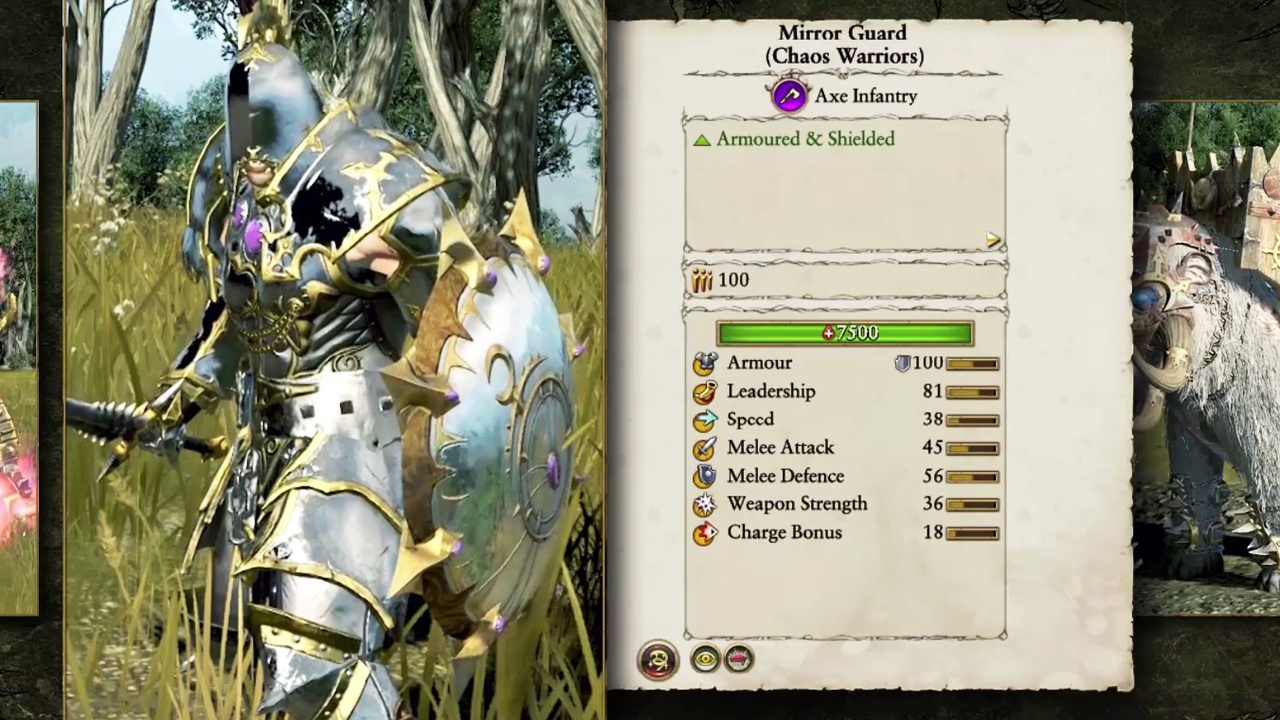 This could be exploited in handing Sigvald more then just one regiment of them [like Tomb Kings who could have multiple Tomb Guard RoR] for later hire. Or at least a guaranteed starting regiment of them. For the generic Slaanesh Chaos Warrior/Chosen look, CA probably has still to make a new design. I would assume as a marked unit in a undivided DLC, the Mirror Guard itself could also need a minor update since game#3 introduced all those Mark of Slaanesh stuff. 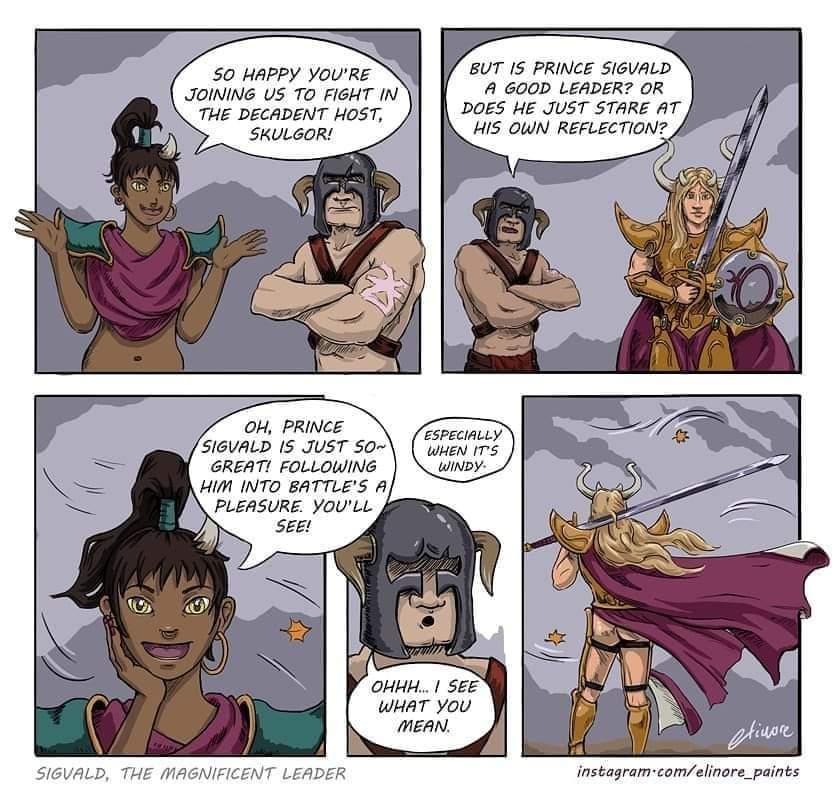 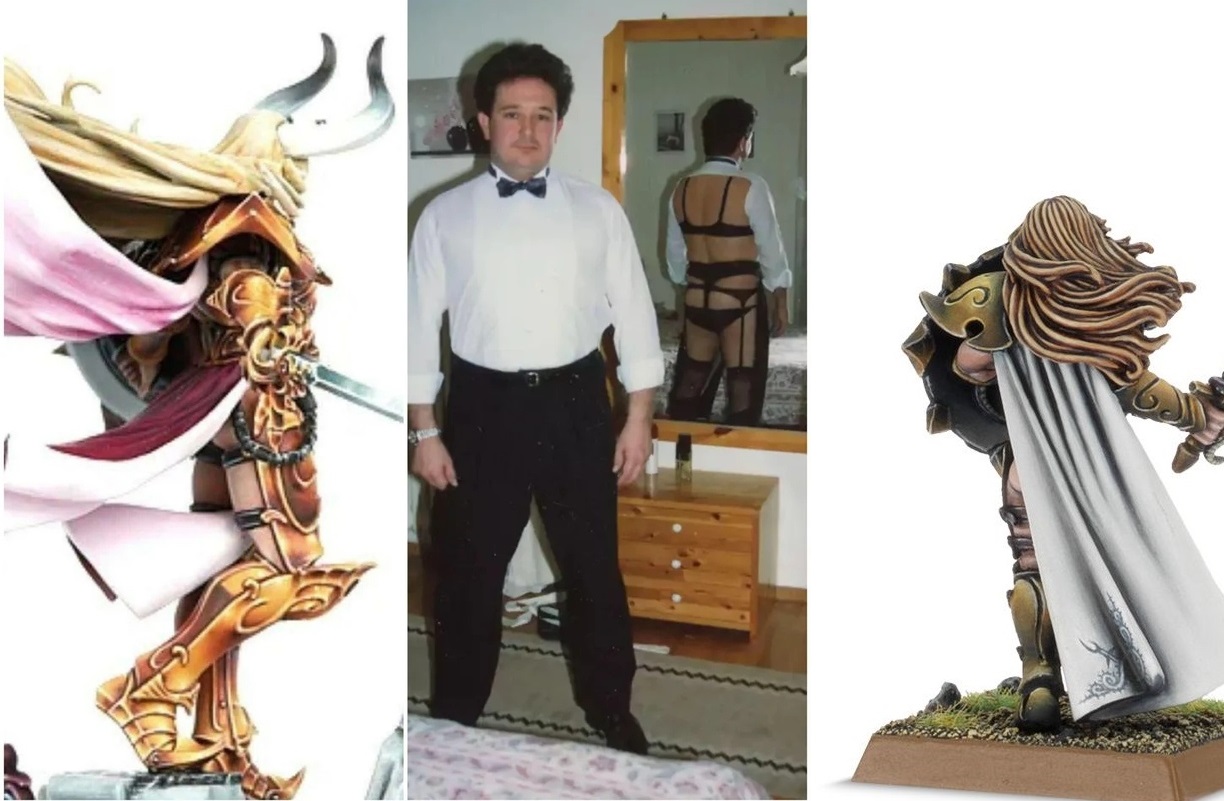