Ideas regarding visually re-designing some LL's

steam_1645108887431FqNwhW Registered Users Posts: 42
June 1 edited June 2 in General Discussion
This is not a huge issue, but I hope that at some point, CA will visually re-design
some of the legendary lords to better reflect the lore. I would like to discuss various
lords from all 3 games, and how they could benefit from a visual re-design.

Short version: Make him a LOT fatter and carried around by a huge crowd of gnoblars.

Long version: Ogres by default are much more massive than humans, and his nickname is
"Shockingly Obese". Yet I have seen people in real life that are more obese than Greasus.
He should be inconcievably fat, maybe twice or thrice as fat as he is now. Come on, CA,
unleash your imagination! Make him so fat that it looks like he is drowning in his own
skin. Also, the fact that he is rolled around by two gnoblars . . . no, just no. Look at
his model - such a massive individual needs a whole crowd to haul him around. You could
add some animations to gnoblars, make them buckle under his massive weight to truly give
us the sense of how enormous he is. Overall, I think the problem with his design is that
it is too toned down - not enough fantasy.

Short version: Tone down his design

Long version: With Kostaltyn, we have the opposite problem - every part of his kit is
overdrawn and overdesigned. The fact that his hair is a mess is a nice touch, but he
is supposed to be a hardcore zealot - elaborate robes just don't fit the aesthetic.
If we had a LL with very plain clothing, that would be something new. There is no
shortage of elaborate and ornamented clothes for the characters, so it would be nice
if CA could take the opposite approach with Kostaltyn - a plain black or grey robe,
a simple torch in his hand, and a plain dagger in his belt, as befits a true disciple of
Jesus - sorry, I meant Ursun. Similar to flagellants of the Empire, that would underline
the fact that his passion for his God is so great that he doesn't bother with his
outward appearance.

Short version: Re-do his voice lines to reflect his intelligence

Now, the previous entries would require quite a lot of work, because the cinematics
those guys appear in would also need to be changed, and making Greasus super-fat would
maybe turn him into a large character, so he might need re-balancing. This one, however,
is quite simple - CA recorded Throgg's voice lines as a typical, growly, dumb monster
voice. Why, for the love of God? There are SO MANY voices like that already in the
game! Every orc LL, every Beastmen LL, Kholek, Skarbrand and so on - they are all just
growly monster voices, and it's supposed to be intimidating, but when they're all like
that, it's just tiresome. Throgg is an incredibly intelligent creature, so CA can really
do something new, something different with this very interesting character. When you have
such an interesting character, why would you make him more boring and generic on purpose?

Long version: I am having a hard time believing that Morathi as she is in the game now
managed to seduce Aenarion. Her beauty should be out of this world. Fay Enchantress looks
way better than her, and Morathi looks COMPLETELY different in cutscenes than in the game,
so I think a visual re-design would be a good idea. Also, she is, like, 99% naked, which is
supposed to be attractive, but it just comes across as lazy. some Dark Elf attires that
don't show as much skin can work better.

Long Version: CA, please, this just looks ridiculous. This guy starts his campaign in what
is basically South America, and he is covered in furs. He would die of a heatstroke on the
first day. Either put him in an attire that better reflects a tropical hunter, or at least
change his starting location.

Short Version: Make him hover in the air

Long Version: We know that Sigvald is blessed by Slaanesh with the ability to hover a few
feet above the ground because the ground and all mortals are beneath him. Making him hover
shouldn't be too difficult to implement, but one of the modders did somethig incredible with
Sigvald, and created one of the most awesome additions to the Warhammer game I've ever seen. 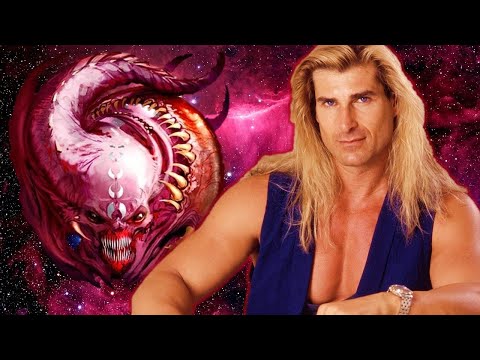 This, in my opinion, is the PERFECT example of taking a piece of fiction and building on it
by expanding its concepts in a logical way with additional fantasy. Read the comments under
that video, that says it all. What I'm saying is this can be applied to other characters too.